Stefanos Tsitsipas improves to 3-2 in his ATP Head2Head series against Andrey Rublev.

ATP Staff
This article contains:
Greek next plays Nadal, with winner advancing to the last four

No defending champion has lost his first two matches at the Nitto ATP Finals since 2006, and Stefanos Tsitsipas refused to snap that streak Tuesday evening.

The Greek saved a match point to defeat tournament debutant Andrey Rublev 6-1, 4-6, 7-6(6), guaranteeing Dominic Thiem’s place in the semi-finals of the season finale. The Austrian has a 2-0 record in Group London 2020 and is now guaranteed to finish winner of the group. Tsitsipas' Thursday clash with Rafael Nadal will determine which of those two players finishes second in the group.

“It was an unbelievable match from both sides. We produced some incredible tennis,” Tsitsipas said in an on-court interview. “The relief at the very end of putting all that effort and all that fight on the court paid off. I am very happy that I showed determination and a willingness to not give up when he had match point. It came easier when he was up 6/5, but then I produced some really good tennis and that helped me take the win.”

Tsitsipas played a tough three-setter against Thiem on Sunday, with only a few points making the difference. The same was the case against Rublev. But this time, it was even closer for the 22-year-old. Rublev won four consecutive points from 5/2 down in the final-set tie-break to earn match point. The Russian double faulted, though, and Tsitsipas took full advantage.

“Having the opportunity to play lots of matches like this, at such a high intensity, and always testing myself against these players gives me the opportunity to learn and grow,” Tsitsipas said. “It is a learning opportunity as well for today. Even though it was a win, I still feel like there is plenty to improve and get better at. I am sure being with that mindset, being willing to just put more and more effort into what I am doing and more sacrifices are going to pay off at the end.” 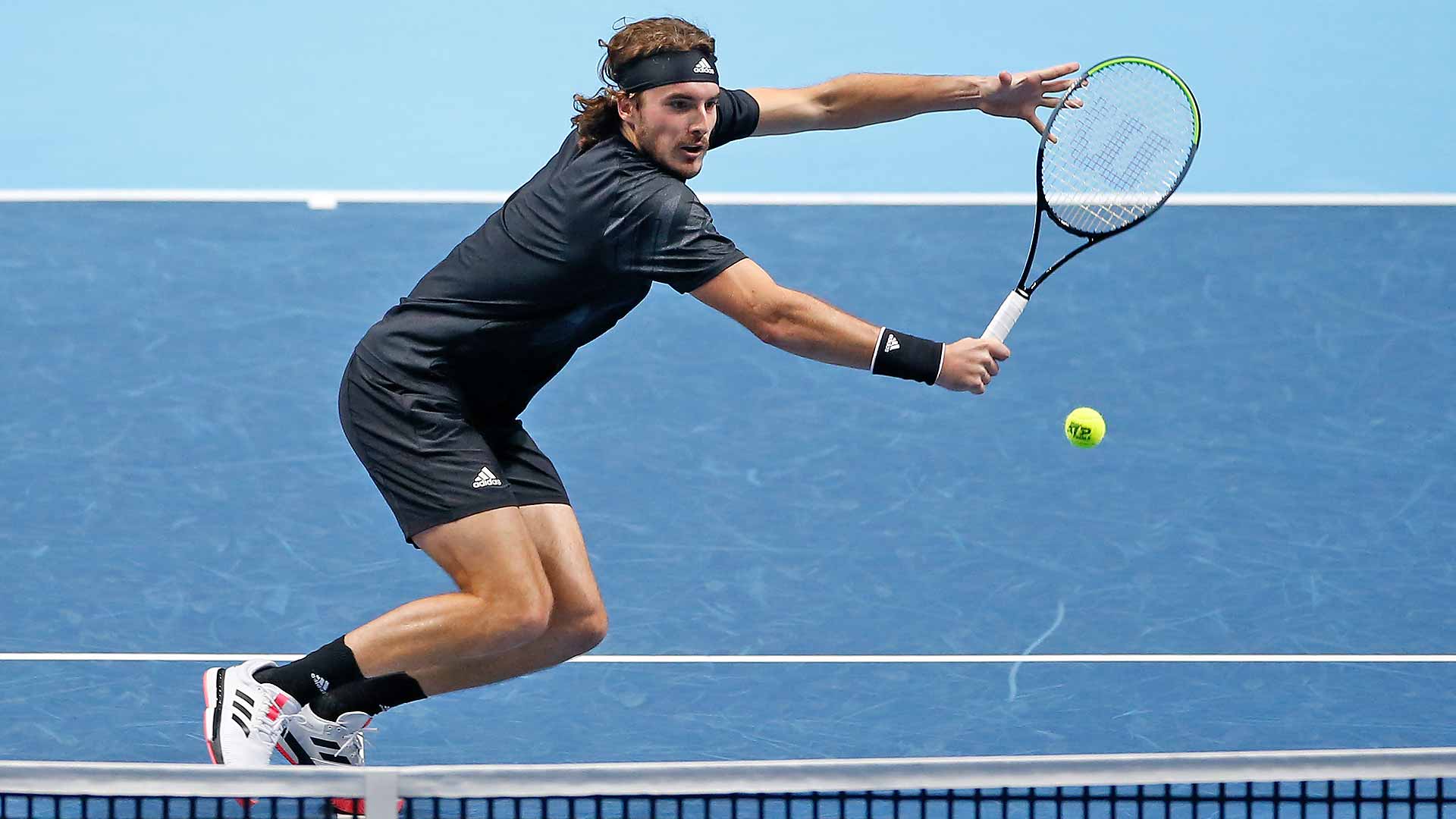 The reigning titlist held his nerve under pressure, making fewer errors in the key moments to outlast the Russian after one hour and 55 minutes. He hit a crucial inside-out forehand at 6/6 to earn the decisive mini-break, levelling his record in round-robin action at 1-1.

"I was eyes on the prize," Tsitsipas said. "I was just focussing on the now and on the present moment that was given to me. At 6-All I went for it. I had a very good return, deep return that allowed me to turn around and hit a successful forehand that [put] a lot of pressure [on him]. I think the psychology changed after that."

The pair walked on Centre Court level at 2-2 in their ATP Head2Head series, and once Rublev found his rhythm, their level was mostly even for the rest of the match. But for a while, it appeared Tsitsipas was in cruise control.

The 2018 Next Gen ATP Finals champion needed just shy of 20 minutes to breeze through the first set, dominating with his serve and preventing the tournament debutant from gaining any rhythm.

Rublev immediately lost serve by missing a straightforward two-handed backhand and seemed to be struggling to cut down his mistakes, much like he did against Rafael Nadal on Sunday. But the Russian succeeded in putting the first set behind him, and from there the quality from both men was high on Centre Court.

One of the keys for the seventh seed was digging his teeth into points. Rublev was frustrated with the number of returns he was missing in the opener, especially on the forehand side. But he simultaneously cut down his errors and increased his aggression once he was able to land more returns, and that proved critical in turning the tide. 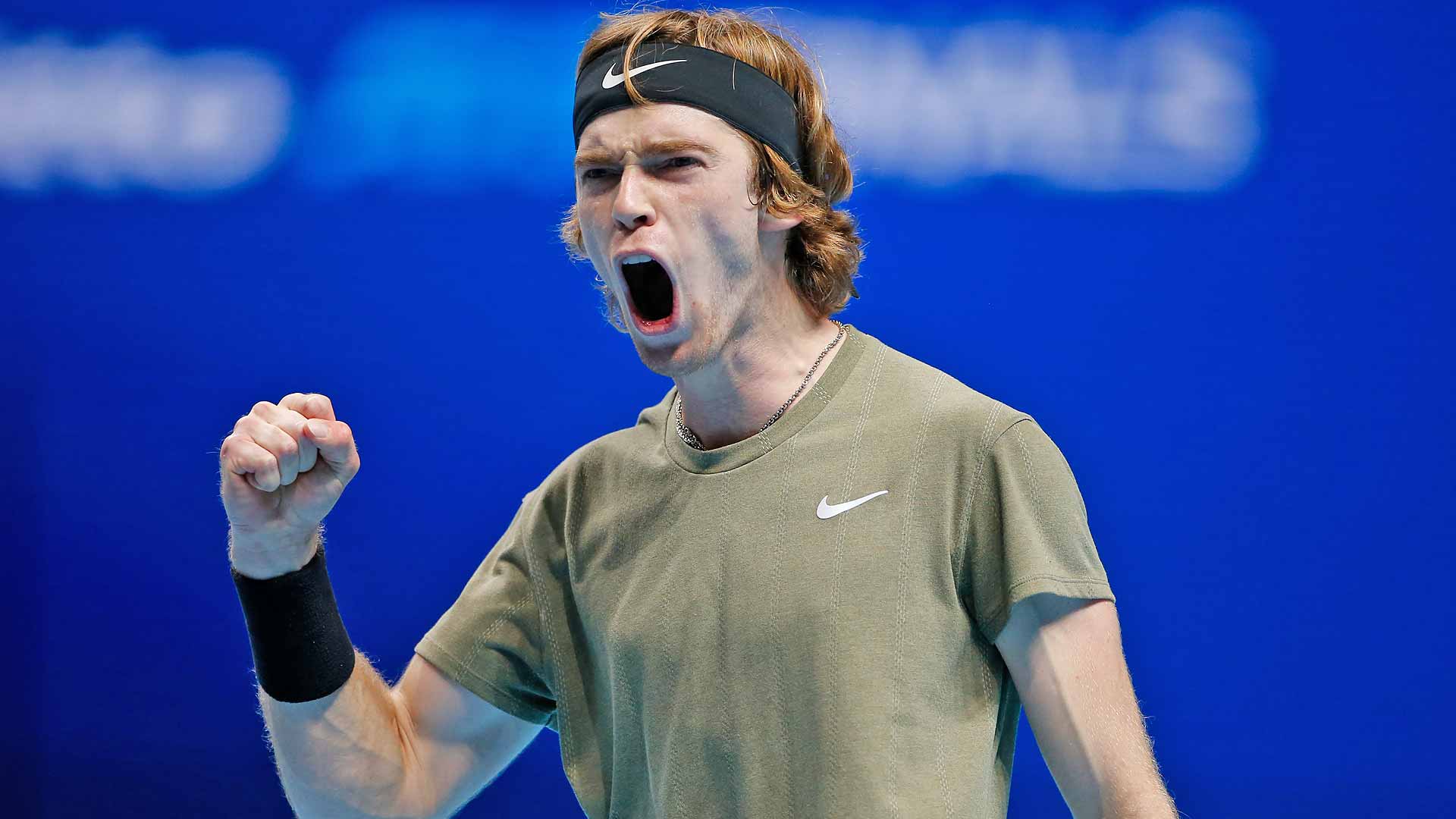 Tsitsipas did not face a break point in his first eight service games of the match, but he played a sloppy game at 4-5 in the second set to give Rublev confidence. The Russian used that to his advantage, as he then pummeled a forehand to break at love and force a deciding set.

Neither man was able to pull away, and they both played clutch service points under pressure to move into a tie-break. Rublev controlled the baseline for much of the final two sets, but he made unforced forehand errors in the forecourt to fall behind. Tsitsipas swooped into net for a backhand volley, which gave him a 5/2 advantage.

But Rublev refused to give up, fighting back to earn match point. He was unable to finish the job, hitting just his second double fault of the match at the worst possible time.

"This match that I turned around basically was supposed to be maybe 6-1, 6-3, and I was still there, I was still fighting," Rublev said. "In the end I had match point. In the end, I was almost there and I had my chance to win the match."

Rublev has been eliminated from semi-final contention at The O2. He will try to earn his first win at the season finale against Thiem.