Stefanos Tsitsipas revealed he does not use shampoo in a recent Twitter Q&A.

Dave Seminara
This article contains:
Stylists reject his "only conditioner" regimen but are split on his style and colour

Stefanos Tsitsipas is full of surprises. Two weeks ago, we learned in a Twitter Q & A he hosted with fans that one of his turn-offs is shampoo. A fan who describes himself as an “irredeemable fan of boy bands” asked the Greek to “drop” his hair care routine.

“Never shampoo, only conditioner,” replied the World No. 6, who will spearhead Greece at next week's ATP Cup in Melbourne.

The fan called it a “smart choice”. But others were scratching their shampooed heads. Was he serious? Let’s not forget that last year Tsitsipas convinced Naomi Osaka that he used Greek olive oil, wasabi, vinegar and mayonnaise in his hair. That was a gag, but perhaps it’s common in Greece to skip the shampoo and go straight to the conditioner? Is a strict conditioner-only diet the secret sauce to becoming an international heartthrob like Stefanos?

In the interest of trying to settle these important questions, we combed the Greek homeland — where all salons are currently closed due to the pandemic — to find hairstylists well versed on Tsitsipas and his locks. We found a pair of brothers, Giorgio and Grigoris Verligas, who are co-owners of Verligas Hair Art Team in Parga, a spectacular resort town on the Ionian Sea. One of their clients, Irene Staknys, a big Tsisipas fan and the owner of Parga’s lovely Petros Penthouse & Studios, served as an interpreter.

The brothers insisted that skipping shampoo is definitely not common in Greece. “Never once did I have a client who doesn’t want shampoo,” said Giorgio, who has been cutting, washing and styling hair in Greece for 30 years. “It’s wrong (not to shampoo). You must shampoo to clean the hair. The conditioner is only for softening.” 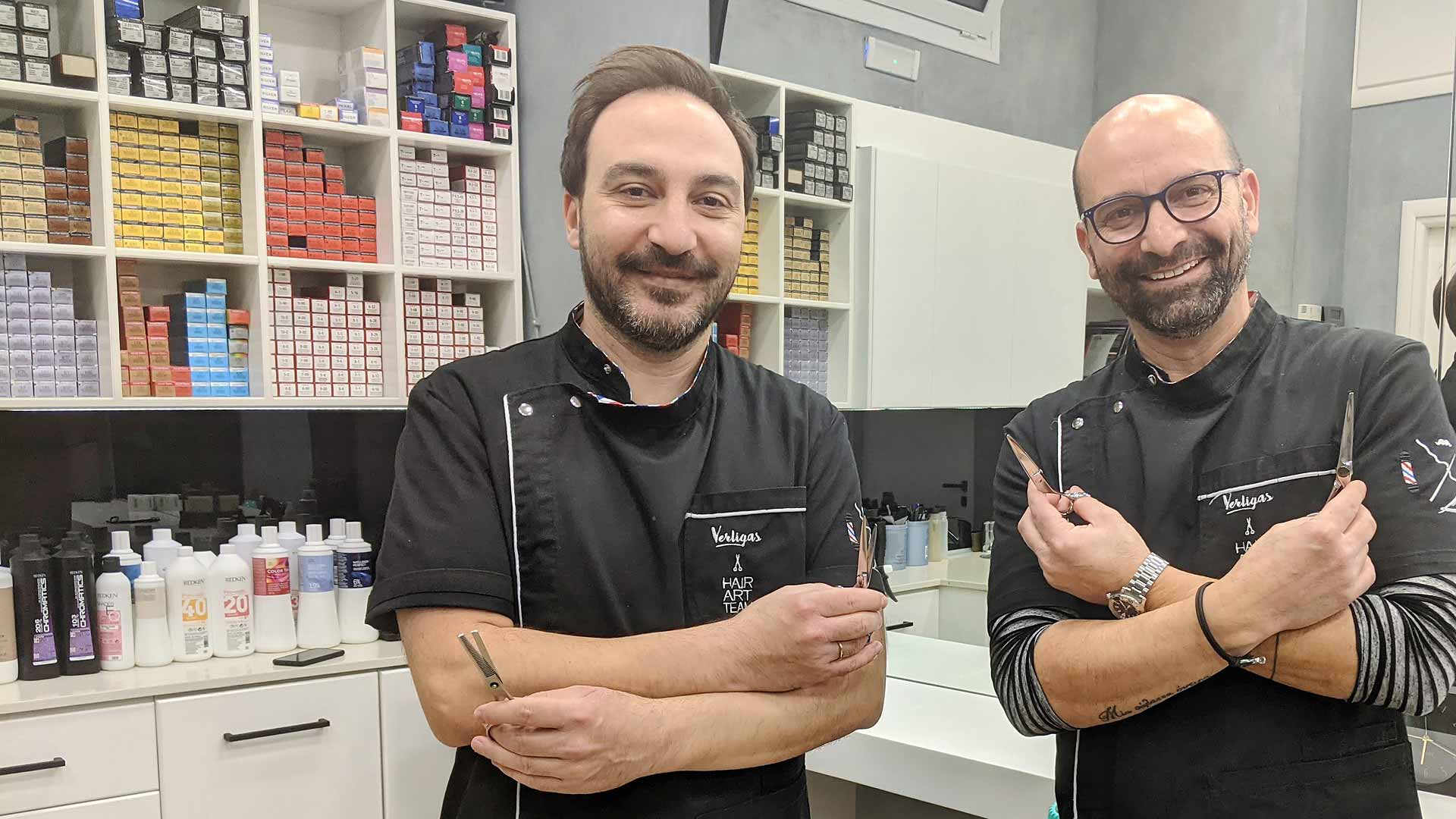 Grigoris and Giorgio Verligas at the Verligas Hair Art Team salon in Parga, Greece.
When asked if they would make an exception for Tsitsipas if he came to their salon, the brothers Verligas were steadfast. “No, this is not possible,” Grigoris said. “We must wash hair before we cut it. The only exception might be for someone who has Rasta hair like Bob Marley.”

And so apparently, even a Greek national hero like Tsitsipas is expected to follow the rules, at least at the Verligas Hair Art Team salon. While the brothers were united on the shampoo front, they were at split ends regarding how they would cut, style and colour his hair if he came to Parga.

Giorgio, the older brother, who has a shaved head, insists that Stefanos’ hair is too long and must be cut at least five centimetres. Grigoris, on the other hand, insists that the long locks work well for Tsitsipas as is. “A tall man like him looks very good with long hair,” he maintained. Grigoris said that his vote for keeping the long hair may be influenced by his wife, a Tsitsipas fan who thinks his look is perfect already. On this matter, Stankys was in firm agreement. “It works for him,” she said.

The brothers both like Tsitsipas’ beard and mustache, though they think he could use a trim, but they part company on the colour of his hair. Giorgio wants it darker, Grigoris a bit lighter. “Brothers don’t always have to agree,” Grigoris said.

To their knowledge, Tsitsipas has never been to Parga. “We would know if he came,” Staknys said. He took a recent holiday in Mykonos, where he hung out with NBA star Giannis Antetokounmpo, but they think he should spend his next holiday in Parga. Stankys says she would offer him a suite with a lovely view of the harbour and the Verligas brothers would give Stefanos a cut, wash and colour for just €50, a €10 discount off their ordinary price, available only for Greek nationals ranked inside the Top 10 of the FedEx ATP Rankings. But the special offer comes with a catch.

“He must agree to use shampoo,” Grigoris says. “For him, it would be free.”