In the second installation of the ATP's 'Ultimate Doubles Series', ATP Uncovered presented by Peugeot looks at the best doubles servers.

Tecau Bulldozes His Way To The Best Doubles Serve

One of the most important shots in tennis is the serve. It starts the point, and it is the only shot a player fully controls. In doubles, a good server can win free points and set up his partner for an easy putaway.

If a player is struggling on serve, he allows the returning team to play more aggressively and gain confidence, changing the tone of the match.

According to some of the best doubles players in the world, being a “great doubles server” does not boil down to one skill. A great server could overwhelm opponents with power, or he could keep returners off balance with an assortment of spins and locations.

In the first installation of ATPTour.com’s ‘Ultimate Doubles Player’ series, some of the world’s doubles stars selected the man whom they believe is the best doubles server.

Players' Choice, Best Serve: Horia Tecau
"I think there are two ways of serving in doubles: First there’s the bulldozer style, and I’d categorise Horia Tecau with that. When he gets his rhythm going, he really can just get through you with his serve and it’s really difficult to deal with. It’s actually quite nice to be his net player because you don’t end up having to do much work. Regardless of conditions, whether the ball is playing heavy or it’s at night or whether it’s a clay court, his sheer ability to generate force [is amazing]." - Raven Klaasen

"Playing with Horia was very easy. I take it he’s called ‘Sniper’ for that reason, because he’s always hitting his target. He does serve very, very well. When it comes to serving, Horia is just solid. [His serve is] always within a small margin of speed. He rarely drops below, he just serves at a high speed all the time, and it doesn’t matter if it’s windy or anything. He always seems to time the ball well and that’s an unbelievable skill to have, no matter what weather you have or anything, just to always deliver the same quality shot. When it’s windy, I need a map and compass to find my toss." - Robert Lindstedt

"He has a very, very good serve. He’s always solid. It doesn’t matter if he stops for three, six months or he’s playing every day, it’s the same. His serve is unbelievable. He can serve wherever he wants, the way he wants. He’s always dangerous when he serves and it’s very tough to break him." - Marcelo Melo

Bob Bryan
"Definitely throughout his career it’s been one of the most respected serves. When he’s on a roll, it’s just impossible to do anything with it. You don’t know where he’s serving, he’s got a great pace, great swing and even if you do manage to get it back, you’ve got Mike cleaning up at the net." - Joe Salisbury

"Over the course of the past 20 years, Bob’s serve has always been the one that most people have said is the best serve in the game. It’s his power, his ability to put the ball where he wants in big moments. He’s got a pretty decent partner to finish things at the net. For those guys to win so much, they’ve both been very reliable at everything they’ve done over the years. But Bob being the lefty, and the actual pace of his serve, it’s very difficult to get the ball away from both guys, especially Mike when he’s taking the middle at the net." - Ken Skupski Henri Kontinen
"He has a very good serve, especially on the deuce side. Probably one of the best wide swingers on the deuce side. Gets it very short, and his shoulder turn when he goes back, he gets so much rotation and that’s where all his power comes from. He changes the spin up a lot of the time. You think he’s going to hit a big pop, but then he takes a lot off it and puts a lot of spin on it. I find Henri very tough to read, and also, he doesn’t hold back on his serve. Even if it’s a big point, he may even go big on his second serve. You can’t really get on his serve consistently and that’s why he holds pretty easily." - Neal Skupski

"When he was at his best, he could go 200 kilometres per hours on both serves and returning bombs, so he doesn’t give you rhythm. He makes you doubt all the time, because you don’t have rhythm, and he was on fire all the time making shots and had the talent to make really crazy shots." - Bruno Soares

Ben McLachlan
"There’s a different style of serving, too. I think one of the younger guys, Ben McLachlan, has a fantastic service action. He’s a very explosive guy. He’s able to make the ball jump, he’s able to make the ball slide. He’s able to go with pure pace, too, and when he tosses it up you know he’s coming with a variety of stuff to you. He keeps you off balance with his ability to shape the ball and move the ball, but he still has plenty of power to get it through you." - Raven Klaasen

"He’s got a super-live arm, can create power with really no effort, can hit all the spots on both sides of the court and from ‘I’, from regular. He’s got a great kick serve, a great second serve. I just feel like when he steps up to the line, you know you’re getting a big serve. He’s at the top of the list." - Rajeev Ram 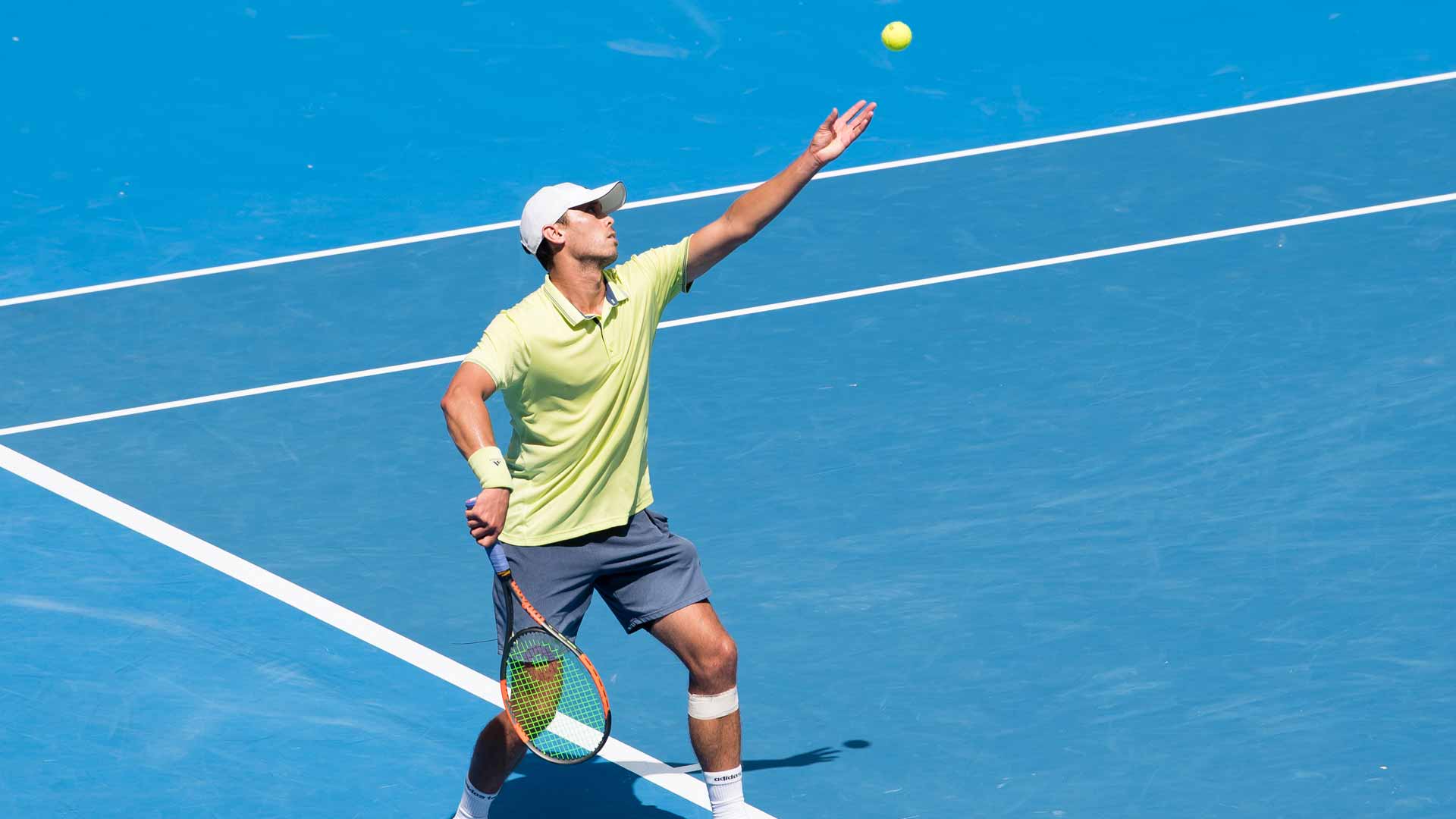 Jack Sock
"He has a lot of movement on his first serve. It’s not only the pace. He can serve hard, but he can move it around really well. It’s also because of what comes after the serve. He’s very tough to play." - Jurgen Melzer

Nicolas Mahut
"His serve is maybe not the biggest, but he always finds a great spot. He’s really tough to return against, and he’s always giving you difficulty. He’s really preparing the situation for winning the point. Maybe not with just the serve, but with the serve and one more ball." - Filip Polasek