Casper Ruud beats John Isner of Team United States, then competes with Viktor Durasovic for a memorable doubles win on Friday at the ATP Cup.

Casper Ruud spearheaded a remarkable comeback win for Team Norway on Friday in Perth at the inaugural ATP Cup.

Trailing 0-1, after Taylor Fritz’s first match win for Team United States, Ruud fought hard to save two match points for victory over former World No. 8 John Isner in the second singles match, and then partnered Viktor Durasovic to a Match Tie-break win in the doubles.

Ruud and Durasovic completed a 4-6, 6-3, 10-5 victory over Americans Austin Krajicek and Rajeev Ram, winners of one ATP Tour team title at the 2018 VTB Kremlin Cup, to complete a 2-1 win in the Group D encounter at the RAC Arena.

“I think I made a great effort today,” said Ruud. “We were one point away from losing the tie, and even if I’d lost [against Isner] 7-6, 7-6, I wouldn’t have thought I’d done a lot wrong. We tried to play aggressively in the doubles, against two good doubles players, but we’re good singles players and tried to win our way, not coming to the net a lot. We’re very happy to beat Team United States.

Team Norway captain Christian Ruud analysed the tie, saying: “It’s been a great day, of course. Viktor had a difficult opponent, in Taylor Fritz, but Viktor’s been playing well in practice. With John, everyone knows it’s difficult especially in tie-breaks. Casper was returning well and putting Isner under pressure, so I think it was one of Casper’s best match wins. Viktor and Casper have played together a lot in doubles, but I encouraged them to give energy and make them play one extra point. They managed to do it.”

The 24-team event is being played in Brisbane, Perth and Sydney from 3-12 January, with the Final Eight beginning on Thursday in Sydney. 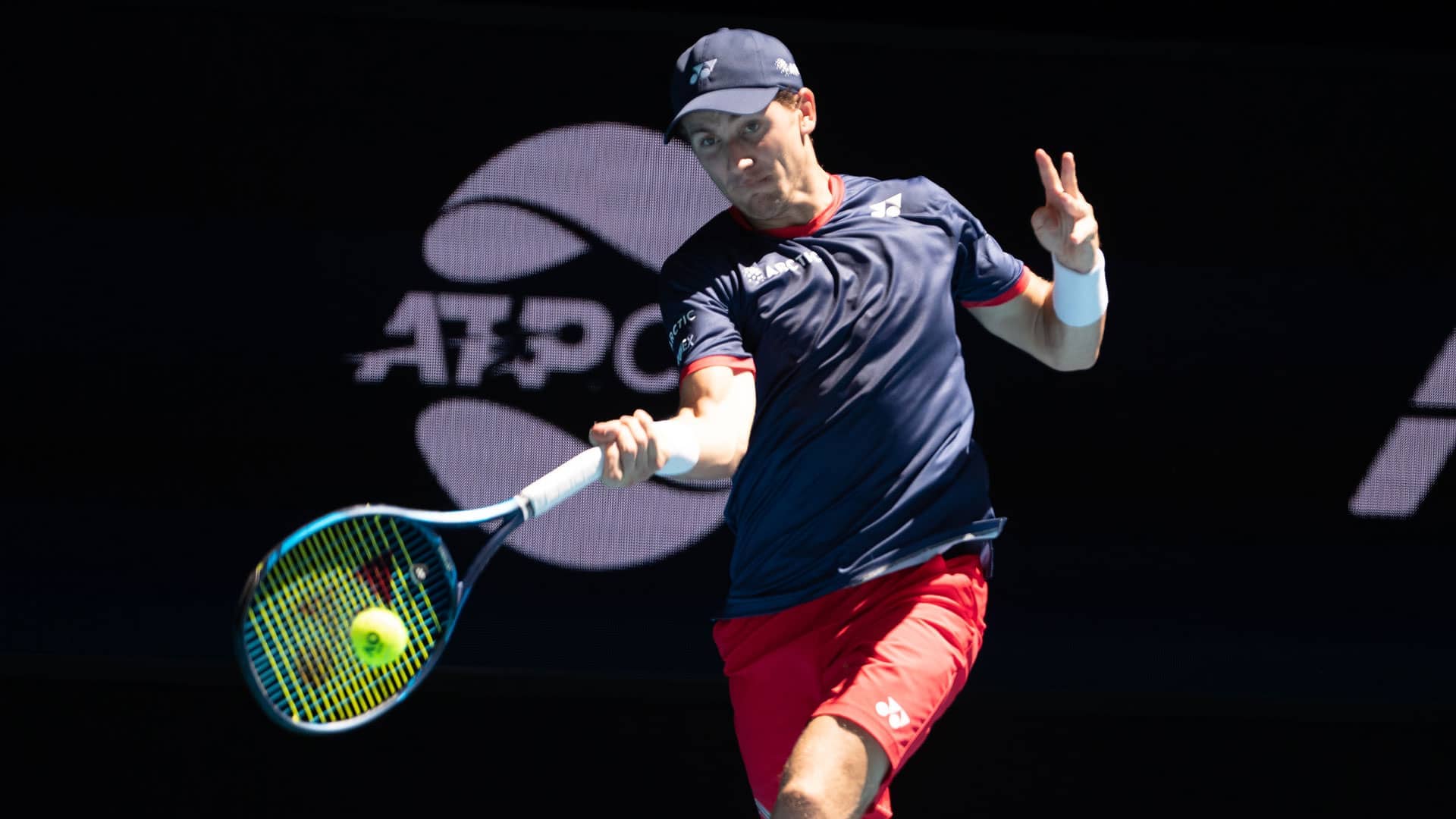 Isner came close to breaking Ruud in the first game of the first set — which saw him strike 24 winners, including 13 aces — then again, when leading 3-2 in the second set. Ruud took a 5/3 lead in the second set tie-break, harrying Isner and moving up the court quickly for forehand winners.

At 4/6, Isner was rock solid at close quarters, forcing a volley error from Ruud, and the American later struck an unreturned serve on the second set point. Isner squandered two match points with forehand errors at 7/6 and 9/8, while Ruud missed out on a third set point when Isner hit a smash winner at 8/7.

“Whenever you play a tie-break, but especially against a big-server like John, you have to concentrate and try not to let points slip away,” said Ruud. “You have to be really focused. In the first-set tie-break, he played some really good points towards the end and in the second-set tie-break I hit a really good return winner and had 5/3 and 6/4 on my own serve. But points do go fast and it’s not fun to lose tie-breaks.”

The third set looked destined for another tie-break, but Ruud stepped up at 6-5, when Isner dropped to 0/40. At the third time of asking, Ruud rifled a backhand to Isner, who, at the net was unable to control a forehand volley back into court. Isner hit 33 aces in total.

“I thought my opponent played well, he was better than me, no doubt about that,” said Isner. “Physically I am fine, but I didn’t do the things I needed to do today. He was making a lot of first serves and I was really struggling. He deserved that one. I have another match, but I’m a notoriously slow starter.

“I was a little bit tense and tight, I wasn’t free out there. I wasn’t clicking. I’d like to have that second match point back.” 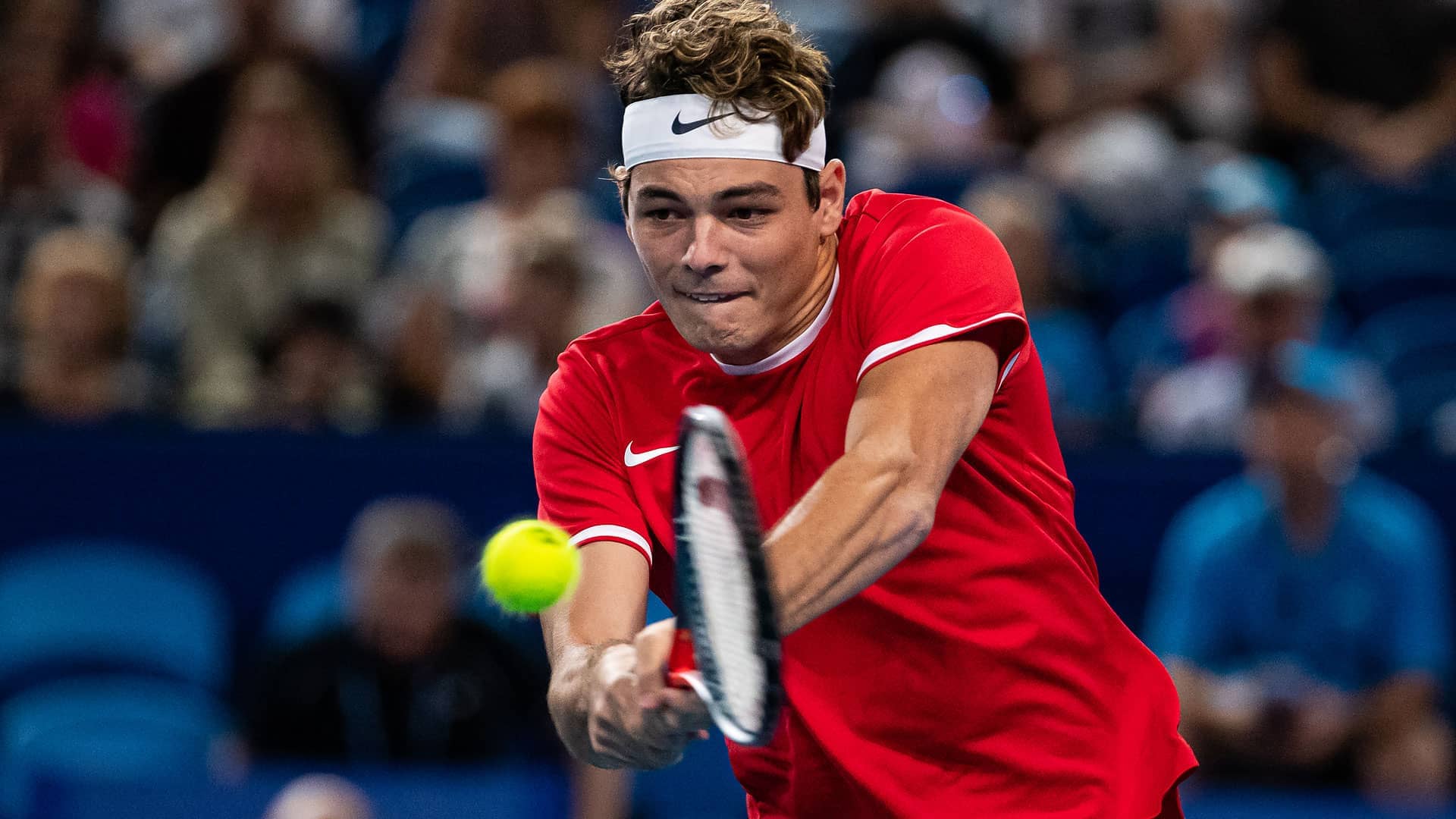 Earlier in the tie, Fritz capitalised on nerves for his opponent, Durasovic. Later, the American, who lifted his first ATP Tour trophy last year at the Nature Valley International, said: “I thought I played pretty well. I went out and I did everything that I told myself I needed to do: I made a lot of returns, played solid, take care of my serve. It was a pretty complete match.”

While Durasovic recovered from 0/40 in the opening game, Fritz soon broke for a 3-1 lead in the first set and saw a run of five straight games ended at 2-0 in the second set. Greater consistency proved to be the difference for Fritz, while No. 332-ranked Durasovic, who had played three Top 100 opponents in his career, rushed to end baseline rallies.

“There wasn’t too much frustration early on, because I didn’t do anything wrong,” said Fritz. “The first game he was 0/40 and hit some really good serves and shots. I knew I needed to keep coming up with chances, until he doesn’t come up with something on a break point.”

Durasovic admitted to nerves throughout, saying: “It was fun in one way, the whole atmosphere and playing on a nice court. But at the same time, I am disappointed as I wasn’t able to play at a level to compare myself. I definitely have mixed feelings. I was nervous from the beginning to the end.”