Sock/Bryan Clinch Second Slam In A Row, Win US Open

Bryan breaks a tie with John Newcombe for first all-time by triumphing at this level for the 18th time, also breaking a tie with his brother Bob Bryan by earning a record sixth victory in Flushing Meadows. At 40 years, 4 months, he also passed Indian Leander Paes as the oldest Grand Slam champion in men’s doubles during the Open Era. Paes was two months younger when he won here five years ago.

"That doesn't really enter your mind when you're playing out there. You're just thinking about your routine and getting great advice from your coaches," Bryan said. "You just play as hard as you can for as long as you can. If it adds up to some records, then it's very cool. But I just do it because I love it, and these are very special moments, holding these trophies. You never know if you're going to get them, so you really savour them. It's a massive team effort."

Bryan and Sock are the first team to win Wimbledon and the US Open in the same year since Jonas Bjorkman and Todd Woodbridge did it in 2003. The last time a doubles team won consecutive major championships was when the Bryan brothers triumphed at four Slams in a row from the 2012 US Open through 2013 Wimbledon.

They will share $700,000 for their efforts during the fortnight, and will add 2,000 ATP Doubles Rankings points to their total. That will propel them to the fourth spot in the ATP Doubles Race To London. Bryan/Bryan occupy the third spot due to their efforts before Bob Bryan got injured in the Mutua Madrid Open final in May. Until this US Open, the brothers competed together here every year since 1995.

"I think Bob is maybe the frontrunner if he gets healthy," Bryan said, joking about picking between his brother and Sock once Bob gets healthy. "I think he is looking forward to coming back. He's seeing our good results, and he sees how much I love being out here still at 40. He's itching to play next season. It's good to go out on your own terms instead of an injury, and he's super motivated. He was actually the first guy to call us on the court to talk to both of us. He's been really supportive. He gets so nervous that he can't watch the matches but he watches the scores tick.

"I might be the guy going out with injury next year, and it could be Jack and Bob," Bryan said, with smiles all around after their victory.

It was a fun atmosphere in Arthur Ashe Stadium, with all fans allowed in the lower tier to get as close as possible to the action. And the Bryan/Sock camp enjoyed themselves, too, holding mini blackboards with the nickname 'BROCK' written for the team. 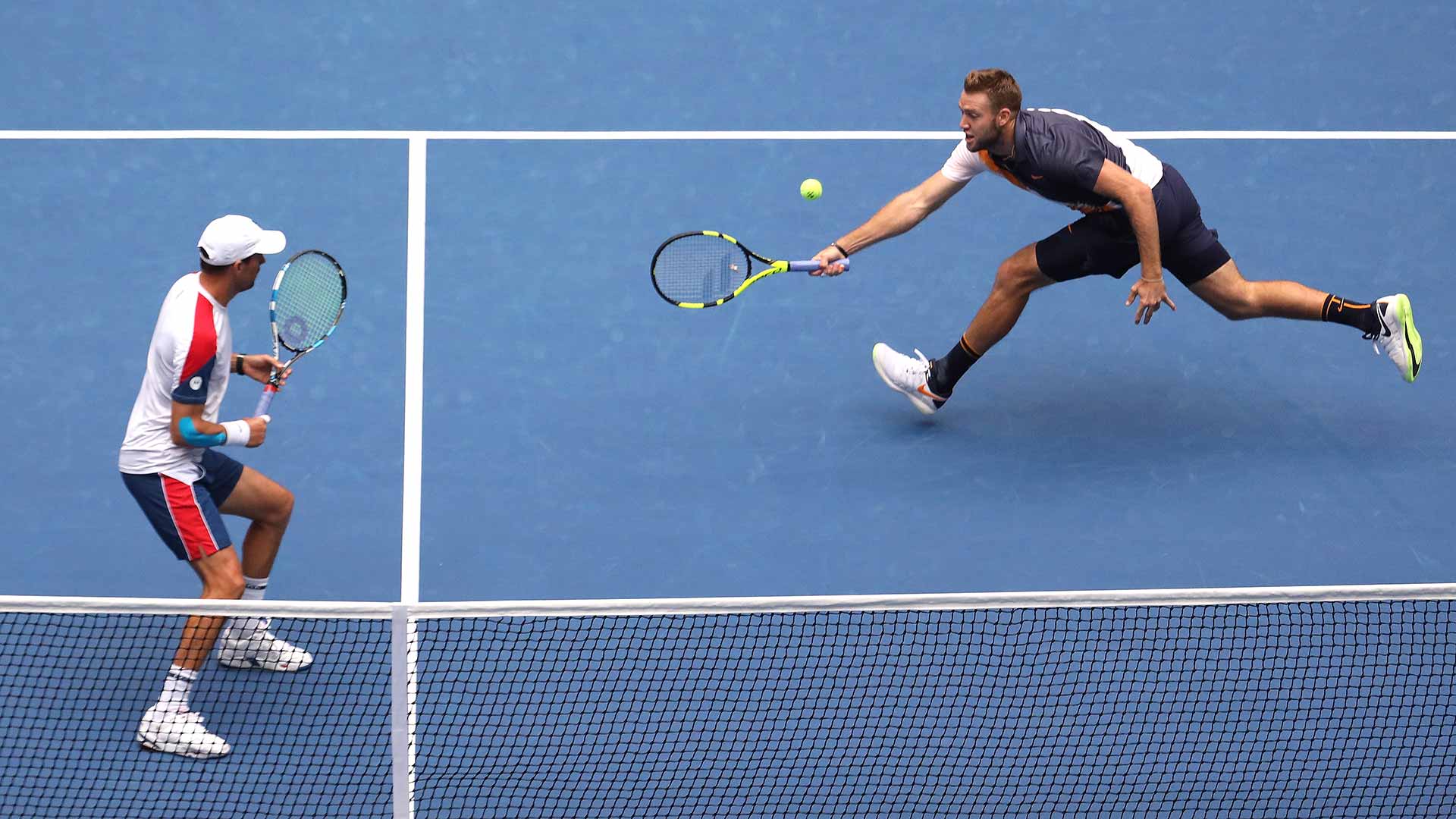 Bryan/Sock dominated on return in the match, consistently forcing the 2017 Nitto ATP Finals runners-up to volley up during their service games as they approached the net with hard, low-flying returns. Sock was especially effective from the baseline with his electric forehand, which he lasered through the middle of the court time after time. Bryan, playing in the deuce court, was on fire with his return, helping his pairing win more than 50 per cent (34/67) of return points.

"I think this was the best match we have played together, and we picked a good time to do it," Bryan said. "Jack hit some monstrous forehands. I think our average speed on shots was 84 [mph], and I'm hitting the ball in the 60s. Who's the guy that's bringing that up? It's Jack. He had one at 111. So, yeah, we just did everything great today. We came out loose and firing and they all dropped."

That kept Kubot and Melo from truly establishing themselves at the net and putting their opponents on the back foot. Bryan and Sock broke four times, while they were not broken. The Americans dropped just three first-serve points and played clean tennis, making only eight unforced errors, four of which were double faults. It was the completion of a dominant performance at the USTA Billie Jean King National Tennis Center, as Bryan/Sock lost just one set in the tournament.

Kubot and Melo arrived in New York having lost five of their past six matches. But the Polish-Brazilian duo put forth a strong effort by reaching their second Slam final as a team. Kubot was trying to become the first Polish man to triumph in doubles here, while Melo was attempting to capture his second major crown. They will split $350,000 in prize money and add 1,200 points.