ATP Staff
This article contains:
Djokovic emerges as player most likely to challenge Nadal for year-end No. 1 ATP Ranking

It was never in doubt. The 2018 US Open proved to be a survival of the fittest and Novak Djokovic was the last man standing on Sunday.

The Serbian claimed his third title in New York on a rainy evening at the hard-court Grand Slam, prevailing 6-3, 7-6(4), 6-3 over Juan Martin del Potro. It was his 14th major crown in total, moving him into a tie for third on the all-time list, alongside Pete Sampras.

Two days after reaching a record-tying eighth US Open final, Djokovic completed his quest in front of a packed crowd on Arthur Ashe Stadium, becoming the 50th champion at the prestigious tournament. He joins Roger Federer (5), Jimmy Connors (5), Pete Sampras (5), John McEnroe (4), Rafael Nadal (3) and Ivan Lendl (3) as players to lift the trophy on three or more occasions.

"Pete Sampras is one of the biggest legends ever to play the game," Djokovic added. "He was my childhood idol. He was someone I was looking up to. The first actually thing I saw related to tennis on the TV was his first or second Wimbledon championship. That inspired me to start playing tennis.

"There is a lot of significance of me being now shoulder to shoulder in terms of Grand Slam wins with him. It's truly incredible when you think about it. I watched him win one of his first Wimbledon championships, and I grew up playing and thinking that one day I'll be able to do what he does. To actually be here, it's a dream come true."

Up to No. 2 in the ATP Race To London, Djokovic has moved to within striking distance of Nadal for the top spot. The Serbian, who qualified for the Nitto ATP Finals for the 11th time on Friday, owns 6,445 points, while the Spaniard has 7,480. Should Djokovic continue his stunning form in the fourth quarter of the season, there is a strong likelihood that the year-end No. 1 ATP Ranking will be decided at The O2 arena in London.

You May Also Like: US Open Final Preview: Former Champs Del Potro, Djokovic Square Off 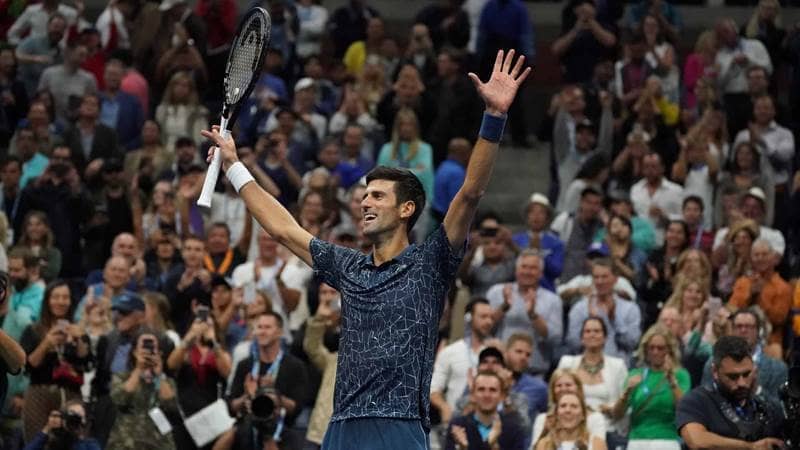 Mother nature wreaked havoc on Flushing Meadows throughout the fortnight, with oppressive heat and humidity making for unfavourable conditions. And she would have one last impact on the tournament, with persistent rain showers forcing the closure of the Arthur Ashe Stadium roof for Sunday's championship.

But Djokovic was at his ruthless best, rain or shine. After being forced to a pair of four-setters to open the tournament, he would reel off 15 consecutive sets to streak to the title. Just four months ago, the 31-year-old's fitness was in question following shoulder surgery. Now, he has tackled one of the toughest tests in tennis with aplomb.

"When the roof is closed, trust me, it's very loud. Very, very loud down there. It takes a lot of effort to actually stay poised in this moment. I'm glad I managed to do that."

Djokovic overcame a baseline barrage from Del Potro on Championship Sunday, using his trademark defence to neutralise the thunderous blows off the Argentine's racquet. He came up clutch in the big moments, firing 31 winners and converting four of seven break chances during the three-hour and 15-minute affair.

The Serbian edged ahead 15-4 in their FedEx ATP Head2Head rivalry, adding a fourth straight victory overall and third in New York. He previously prevailed in the 2007 third round and 2012 quarter-finals.

After suffering a shock defeat to Marco Cecchinato in the Roland Garros quarter-finals, Djokovic has been a force on the Grand Slam stage ever since. He secured his third Wimbledon-US Open double, having also achieved the feat in 2011 and 2015, and has now won 26 of 28 matches overall since that loss to the upstart Italian.

Del Potro, meanwhile, was competing in his second Grand Slam final, having defeated Federer for his maiden crown at the 2009 US Open. Playing some of the best tennis of his career, the Tandil native will rise to third place in the ATP Race To London on Monday. He was bidding to become just the third player from South America to win mutliple major titles, joining Gustavo Kuerten and Guillermo Vilas.

"I'm very sad for being a loser today," said Del Potro. "But Novak deserved to take the trophy. He played a great match, very smart game. I had my opportunities during the second and third set.

"But I was playing almost at the limit all the time, looking for winners with my forehands, backhands, and I couldn't make it because Novak was there every time. He's a great champion. So I'm glad for him."

An all-time record 828,798 fans experienced the 2018 US Open, including qualifying week and the two weeks of the main draw.

How The Final Was Won...
With both trying to navigate through tricky, slower conditions, they would remain on serve through the first seven games. Del Potro had a 40/0 lead at 4-3, but Djokovic would reel off five straight points to snatch the opening break in stunning fashion. Del Potro tried to hit through the Djokovic defence and break down the Serbian's game to no avail. A netted backhand would seal the opening set after 42 minutes.

The Serbian's speed continued to rattle the Tandil native in the second set. An elastic wall from the back of the court, he would secure a quick break for 2-1 behind a whopping 97 per cent of returns made. But Djokovic would finally blink midway through the second, seeing his streak of 23 consecutive holds snapped. A 125 mph ace would suddenly put Del Potro ahead 4-3 as he consolidated his first break of the match.

With Djokovic's shots falling short, the Argentine sought to wrestle momentum. But a marathon 20-minute game looked to be the turning point, as Djokovic fought off three break points and stayed the course in the ensuing tie-break. Del Potro's 22nd forehand unforced error gave the Serbian a pair of set points and he would convert his first. After a gladiatorial 95-minute set, the two-time champion took a commanding two-set lead.

Having won 55 per cent (41-34) of points under five shots through the first two sets, Djokovic owned the short rallies that Del Potro's typically dominates. Matching his big-hitting opponent with every forehand, the impressive display bled into third set. He would win a stretch of six of seven games, breaking for 3-1 and eventually finding the finish line after three hours and 15 minutes. He struck an overhead smash to clinch his first championship point.