Rafael Nadal survives a stern test from Karen Khachanov at the US Open.

ATP Staff
This article contains:
Top seed reaches Round of 16 at the US Open for a 10th time

What. A. Battle! Karen Khachanov introduced himself to the world on Friday, as the 22-year-old made a grand statement against Rafael Nadal on Arthur Ashe Stadium. He gave the World No. 1 all he could handle in an epic third-round clash at the US Open.

It was one of the most riveting matches of the year, as Khachanov pushed Nadal to the edge, storming to a set and a break lead and refusing to back down under the bright lights in New York. The defending champion's fighting spirit was on full display and he was forced to find his top gear as the Russian blasted away from the baseline. He would survive 5-7, 7-5, 7-6(7), 7-6(3) in four hours and 22 minutes. It the longest match of Nadal's career at the hard-court Grand Slam.

"I am very happy to be through in a very tough situation," Nadal told Brad Gilbert of ESPN following the match. "There were some tough moments during the match, but he played aggressive. There are things to work on for the next round, but the good thing is I have a chance to improve."

Nadal advances to the Round of 16 at Flushing Meadows for a 10th time. The three-time champion was forced to rally from a set down, as he converted five of 13 break chances. He survived an offensive onslaught from his big-hitting opponent, who launched 66 winners, including 22 aces.

Nadal has now won 25 of his past 26 matches this year, but the Spaniard has struggled at this stage of the US Open recently. He succumbed to Fabio Fognini in the third round in 2015 and was also forced to rally from a set down against Leonardo Mayer in 2017. 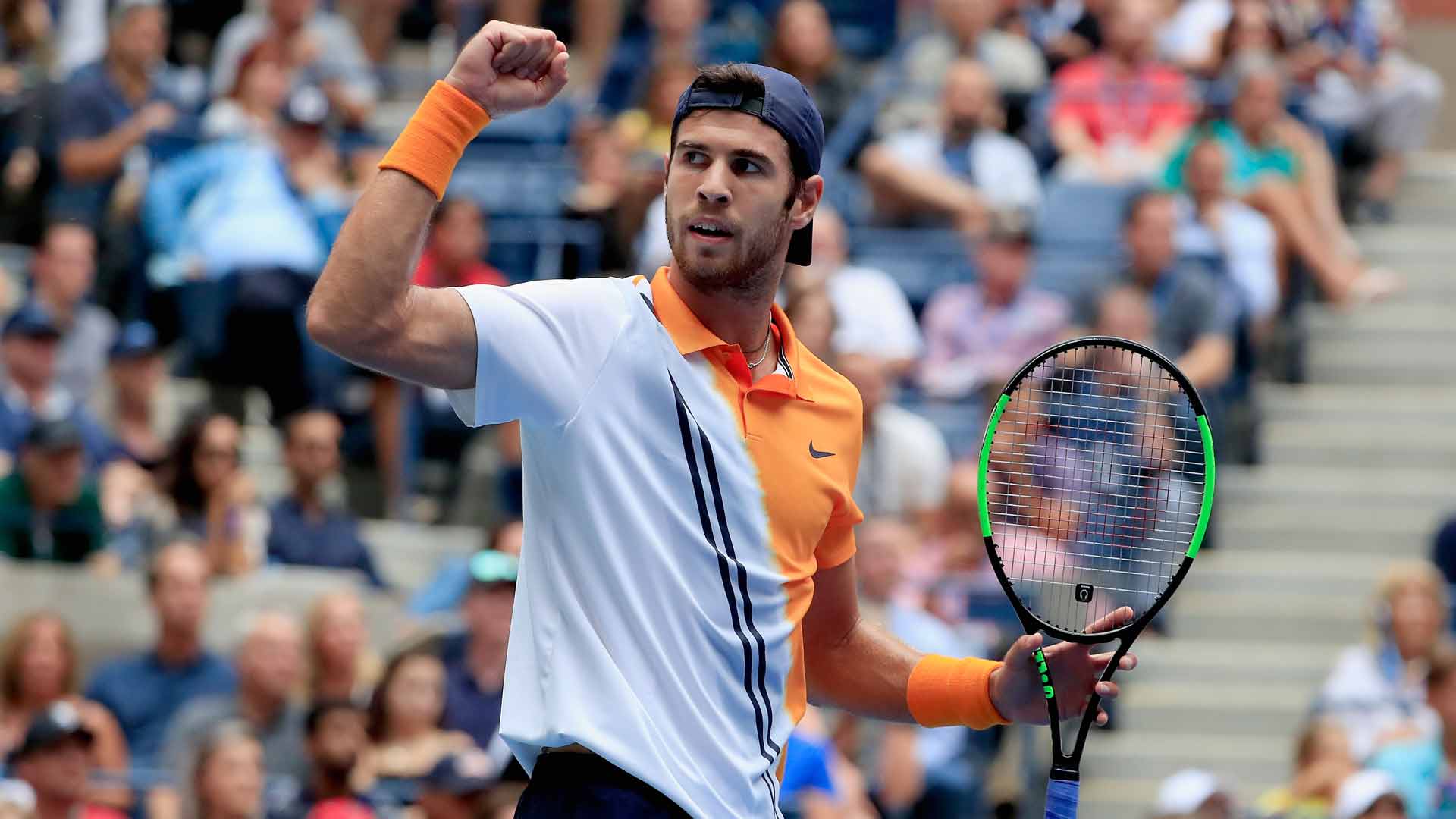 Khachanov built off the momentum from a semi-final run at the Rogers Cup three weeks ago, where he pushed Nadal in a tight two-set affair. On Friday, the imposing ground game of the Russian set the tone behind a bevy of forehand winners. Nadal did well to deny a trio of set points in the opener, but Khachanov would seize control and eventually claim a set and a break lead.

"He's improving always," Nadal added, referring to Khachanov. "He's young. He has everything. He's a great player. I really see him winning a lot of matches in his tennis career. He does a lot of good things. He has a great future to come. For me personally, of course, it was a physical, demanding match. It was a mentally demanding match. That's why we practise every day, to play these kind of matches in a great atmosphere in front of an amazing crowd."

You May Also Like: Khachanov: 'I Gave Everything I Had'

Bidding to reach the Round of 16 at a third straight Grand Slam, Khachanov won his first set over a World No. 1 in his fifth such encounter. He would serve for a two-set lead at 5-4, but a dogged Nadal broke right back. The drama built to a crescendo as rain began to fall on Arthur Ashe Stadium, prompting tournament officials to close the roof. As he has done on multiple occasions this year, the Mallorca native was clutch upon resumption, breaking immediately to grab the set.

In the final of the ATP World Tour Masters 1000 event in Rome, Nadal was down a break to Alexander Zverev in the deciding set, but reeled off four straight games to take the title following a rain stoppage. Two weeks later, he dropped the opening set to Diego Schwartzman at Roland Garros, before storming out of a subsequent rain delay to seize control.

As the third set wore on, Khachanov refused to back down, maintaining an aggressive gameplan and remaining a force on serve. Since denying a break chance at 3-2, he reeled off 15 of the next 16 service points to force a tie-break. In one of the more thrilling tie-breaks of the year, Nadal would secure his fifth set point after a jaw-dropping 39-shot rally. The Ashe faithful were on their feet as both players refused to yield an inch. 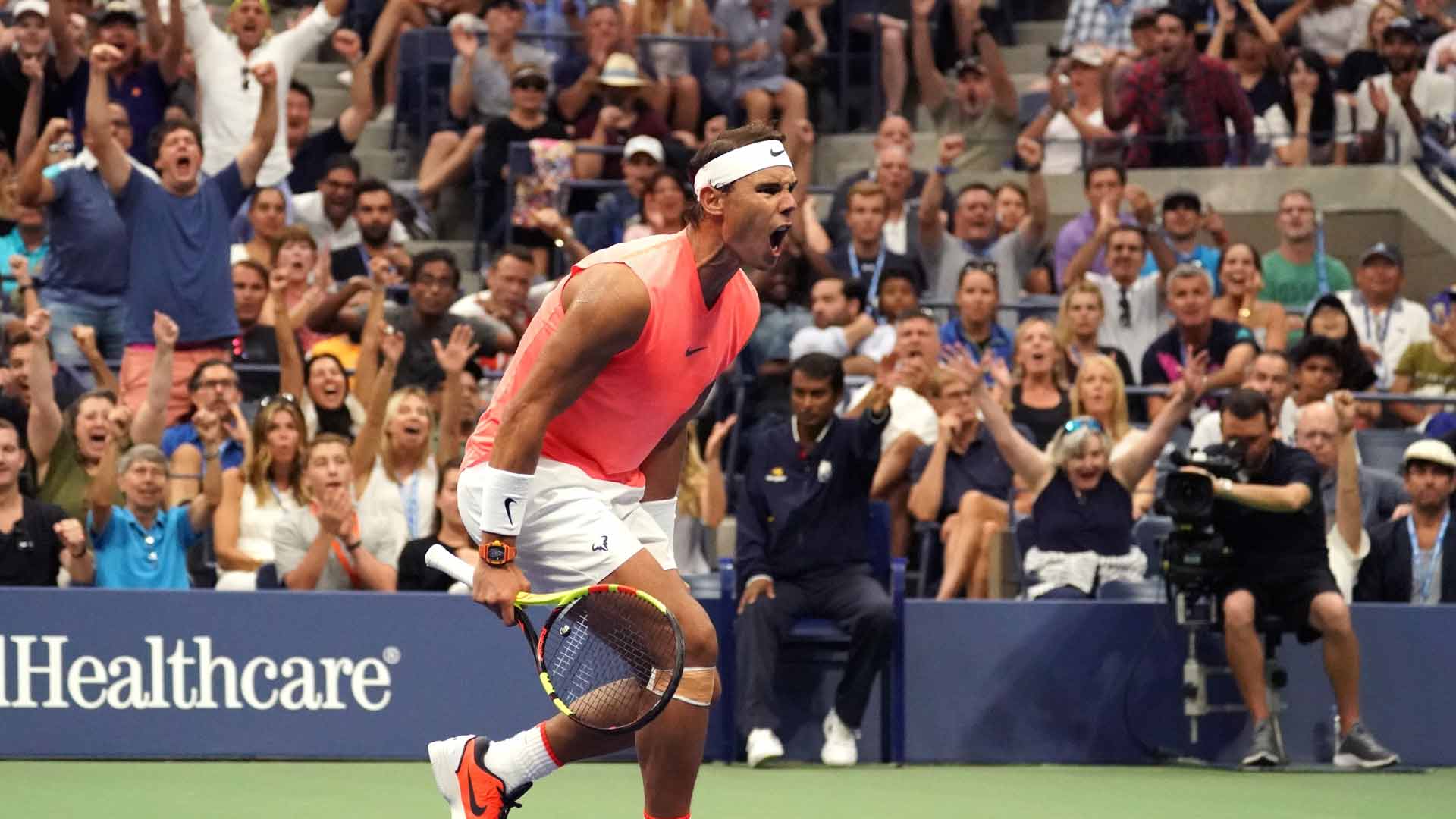 It appeared that Khachanov was physically gassed as the fourth set got underway, with Nadal breaking for a 2-1 lead. The Spaniard would serve for the match at 5-4, but Khachanov had another plot twist in store, breaking to love in dramatic fashion. It was one pulsating rally after another as the set would proceed to a tie-break. But Nadal's experience would push him across the finish line on his third match point, as both players collapsed into each other's arms at the net after four hours and 22 minutes.

"I gave everything what I had," Khachanov said. "I think everybody saw it. I'm proud of myself that I could play a good game today, fight til the end. Just a few points difference that it could go another way.

"Big respect to Rafa. That's why he's No. 1 in the world, such a great fighter. I'm just happy about my performance. I hope to keep going that way."

Awaiting Nadal in the fourth round is Nikoloz Basilashvili, who overcame Guido Pella 6-3, 6-4, 1-6, 7-6(4) to reach the Round of 16 at a Grand Slam for the first time. Champion at the ATP World Tour 500 event in Hamburg last month, he has become the first Georgian to reach the last 16 at a major since Irakli Labadze at Wimbledon in 2006. In their lone previous FedEx ATP Head2Head encounter, Nadal dropped just one game in prevailing 6-0, 6-1, 6-0 at Roland Garros last year.