The Power Of The ATP Cup Team Zone: Fritz Fires Away

Andrew Eichenholz
This article contains:
Learn how the United States is utilising on-court coaching in Sydney

Taylor Fritz earned a big season-opening win on Sunday against Felix Auger-Aliassime at the ATP Cup. One of the perks of being at this event is he had his coach — and Team United States captain — Michael Russell by his side through the roller-coaster of his comeback against the Canadian.

Throughout the match, the broadcast feed showed Fritz and Russell chatting during changeovers about match strategy, tactics and more in their country’s Team Zone. Not a changeover went by that Fritz was not throwing an idea or question at the former World No. 60.

“It was great. It was a lot of fun. It’s great having the whole team there in the zone so we could all talk to each other and being able to communicate with the player and then having stats available if you need it,” Russell said. “It’s a unique experience, but I’ve enjoyed it. I think it’s great. I’d love to see it in more events, where there is more on-court coaching or on-court involvement between the player and coach or team member.”

This wasn’t the first time Fritz has shown his analytical side. At the 2018 Intesa Sanpaolo Next Gen ATP Finals, he often queried his coach via headset.

“Taylor is very communicative, very analytical, which is a good thing and then sometimes it could be a little different, because he is so communicative,” Russell said. “He says whatever is on his mind, whatever he’s thinking and he always questions everything that I suggest, which can be good because if he doesn’t agree with it, or if it’s something that he wants to detail further, then we have an open discussion about it.

According to Fritz, these things happen whether he has access to his coach or not.

“When I can't talk to my coach, literally the same things are just kind of going on in my own head,” Fritz said. “But it's nice to have someone there, because then I'll tell them what I'm thinking and then kind of get that confirmation.”

Outside of a team event like the ATP Cup, Fritz is against on-court coaching because he feels his mind could be a weapon, just like his forehand and other parts of his game.

“I think a big part of tennis is being able to strategise and understand what's going on in the match,” Fritz said. “I think tennis is an individual sport and I think a huge part of it is kind of doing these things and figuring it out by yourself.” 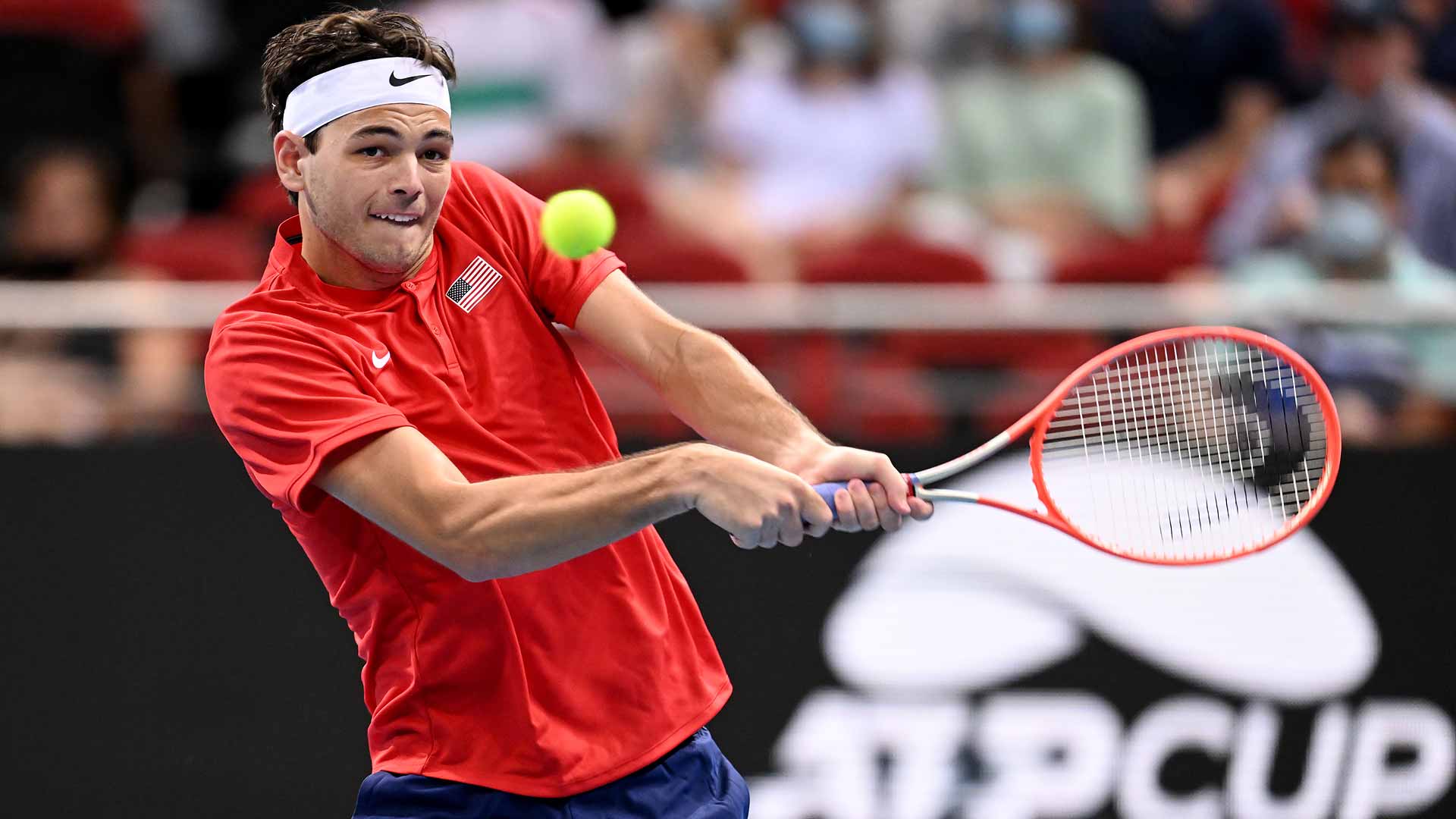 Photo Credit: Dan Peled/Tennis Australia
The Team Zone was valuable for Fritz after he let slip four consecutive set points at 6/2 in the first-set tie-break. Russell was there to help him remain positive despite the disappointment of losing the opener.

“Obviously he was frustrated and disappointed that he didn’t win the first set. He had multiple chances being up pretty big in that tie-break,” Russell said. “But I said, ‘Look, it’s one set down and a little bit more of a challenge, but you’ve done the fitness and you’re ready. Just have a good start here and keep the energy up with positivity and have a good second set.’”

There is also a tablet in the Team Zone that allows captains and players to examine match statistics in real time. Russell said that they did not use the tablet as much during Isner’s win against Brayden Schnur, but Fritz was particularly curious about serving numbers.

“Usually during a match you don’t want to get so involved in the stats,” Russell said. “Because then you start second-guessing yourself and it’s more of the psychological factor that plays a part.”