Stan Wawrinka needed five hours and nine minutes to dispatch Stefanos Tsitsipas in the fourth round at Roland Garros.

Wawrinka After Five-Hour Epic: 'This Is Why I Came Back'

ATP Staff
This article contains:
Former World No. 3 reflects after victory against Tsitsipas

Nearly two years ago, Stan Wawrinka underwent two knee surgeries. The Swiss had been flying high inside the Top 5 of the ATP Rankings, having won a Grand Slam per year from 2014-16. But all that momentum came to a screeching halt when he went under the knife in August 2017. Wimbledon was his final tournament that year.

Wawrinka did not instantly return to the form he had soared to when he returned early last year. Instead, the powerful Swiss fell as low as No. 263 in June 2018, and he would tally a 17-17 mark on the year. The difficult times were plentiful.

But on Sunday, Wawrinka defeated World No. 6 Stefanos Tsitsipas 7-6(6), 5-7, 6-4, 3-6, 8-6 in a five-hour, nine-minute slugfest to reach the Roland Garros quarter-finals. It was a high-quality battle full of emotions and intensity, sending fans at the venue and around the world into a frenzy.

“That's the kind of emotion I was practising to have back, for sure. Playing in front of such a crowd, such a big atmosphere, five-set match in a Grand Slam, that's the reason why I came back from the surgery in the first [place],” Wawrinka said. “It’s because I love and enjoy to play in front of people, to play in the biggest tournaments you can play. Today was something really special.” 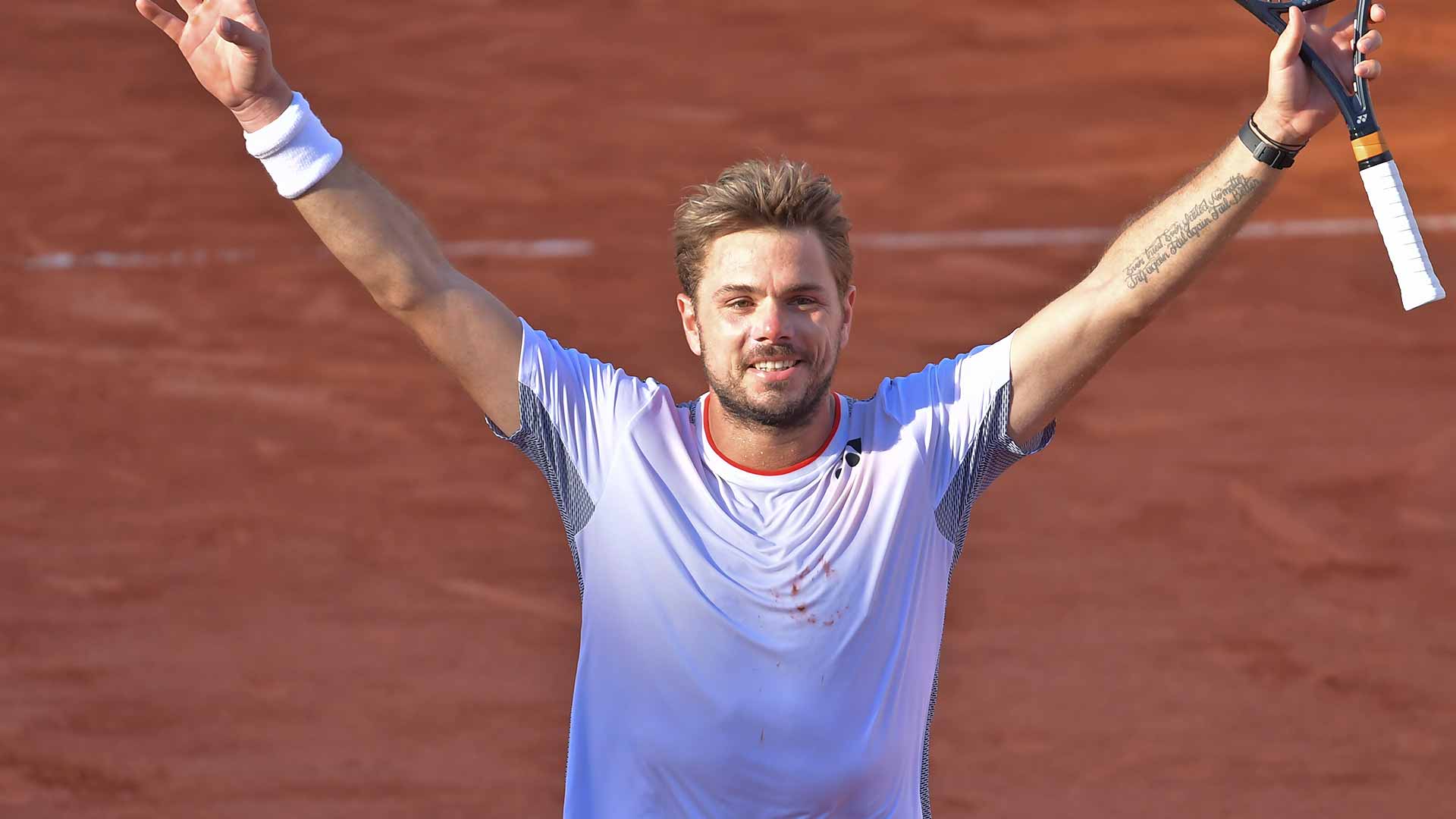 It was not always easy for Wawrinka. The 34-year-old arrived in Paris on a three-match losing streak. And 11 times since his knee surgeries, the 16-time tour-level champion suffered a first-round defeat. But Wawrinka never stopped working hard and deep down, he knew it was a matter of if, not when, he would break through again.

“It's never sacrifice when you love what you're doing. For sure, the past two years were tough. But again, I have been here before. I think I know exactly what I'm doing,” Wawrinka said. “I'm happy with everything I'm doing, with my team, practice-wise, physical-wise. Also, knowing that my level is getting there, hopefully I can keep going. If it's here, it's perfect. If not, it's going to be in the next one.”

You May Also Like: After Five Hours, Wawrinka Escapes Tsitsipas To Make QF

There were plenty of moments in this match when Wawrinka could have faltered, and a confident Tsitsipas, who at World No. 6 is in the best form of his life, would have happily barged through whatever opening the former World No. 3 gave him. But Wawrinka did not crack, saving 22 of the 27 break points he faced, including all eight he confronted in the decider, to advance in the fourth-longest match in tournament history.

“It was an amazing battle today. Today we saw only one centimetre can change the winner,” said Wawrinka, whose backhand chip passing shot on match point barely clipped the sideline. “I think he would have deserved as much as me to win the match today. It's for sure a tough loss for him, but it was something that was a big battle. I'm happy with everything that I have done today, the way I was fighting, the way I was staying with him, even if I was tired, the way I started to play a little bit more aggressive.

“Again, the atmosphere on this court is something really special. Today it was really amazing.”

On paper, Wawrinka's win will go down as a five-set victory in the fourth round at Roland Garros, the fifth time the 2015 champion has reached the quarter-finals in Paris. But this felt like far more for the Swiss.

It brings back memories of the 2013 Australian Open, which Wawrinka has often said truly gave him belief that he could compete with the best players in the world on tennis' biggest stages. In the Round of 16 in Melbourne that year, Wawrinka fell against Novak Djokovic, 10-12 in the fifth set, after five hours and two minutes. But 'Stan the Man' had arrived. And this time, after another five-hour marathon — albeit a victory on this occasion — you can say that 'Stan the Man' is back.

“That's the reason why I still play tennis, and that's the reason why I'm practising every day, to try to win big matches like that," said Wawrinka, who will now try to beat Roger Federer, whom he defeated in the 2015 quarter-finals en route to his title. "So for sure when I'm on the court I try to enjoy it and remember also everything I have done to be here.”