Dramatic five-setters are contagious at this year's Wimbledon Championships.

First, it was Kevin Anderson stunning Roger Federer and outlasting John Isner to reach his second major final. Then, Novak Djokovic survived Rafael Nadal in a two-day thriller. And later on Saturday, it would be the doubles guys joining the marathon party.

As day turned to dusk at Wimbledon, seventh seeds Mike Bryan and Jack Sock survived Raven Klaasen and Michael Venus 6-3, 6-7(7), 6-3, 5-7, 7-5 after nearly four hours to take the doubles championship. Appearing in just their second tournament together, the all-American team captured the crown in dramatic fashion. It was their third five-set victory of the fortnight.

Bryan, who was competing at the All England Club for the first time with someone other than his brother Bob Bryan, due to the younger twin's hip injury, became the oldest man in the Open Era to win the Wimbledon doubles title. The 40-year-old also added a record-tying 17th Grand Slam doubles crown in total, joining Aussie legend John Newcombe atop the list.

You May Also Like: Mike Bryan Clinches No. 1 By Reaching Wimbledon SF With Sock

"I told him it was like a mental training kind of two weeks. It's going to toughen us both up for the future. But a blast to play with Jack. He's got so many skills. I was in awe a lot of the time. He hit some amazing shots. His speed is unbelievable. 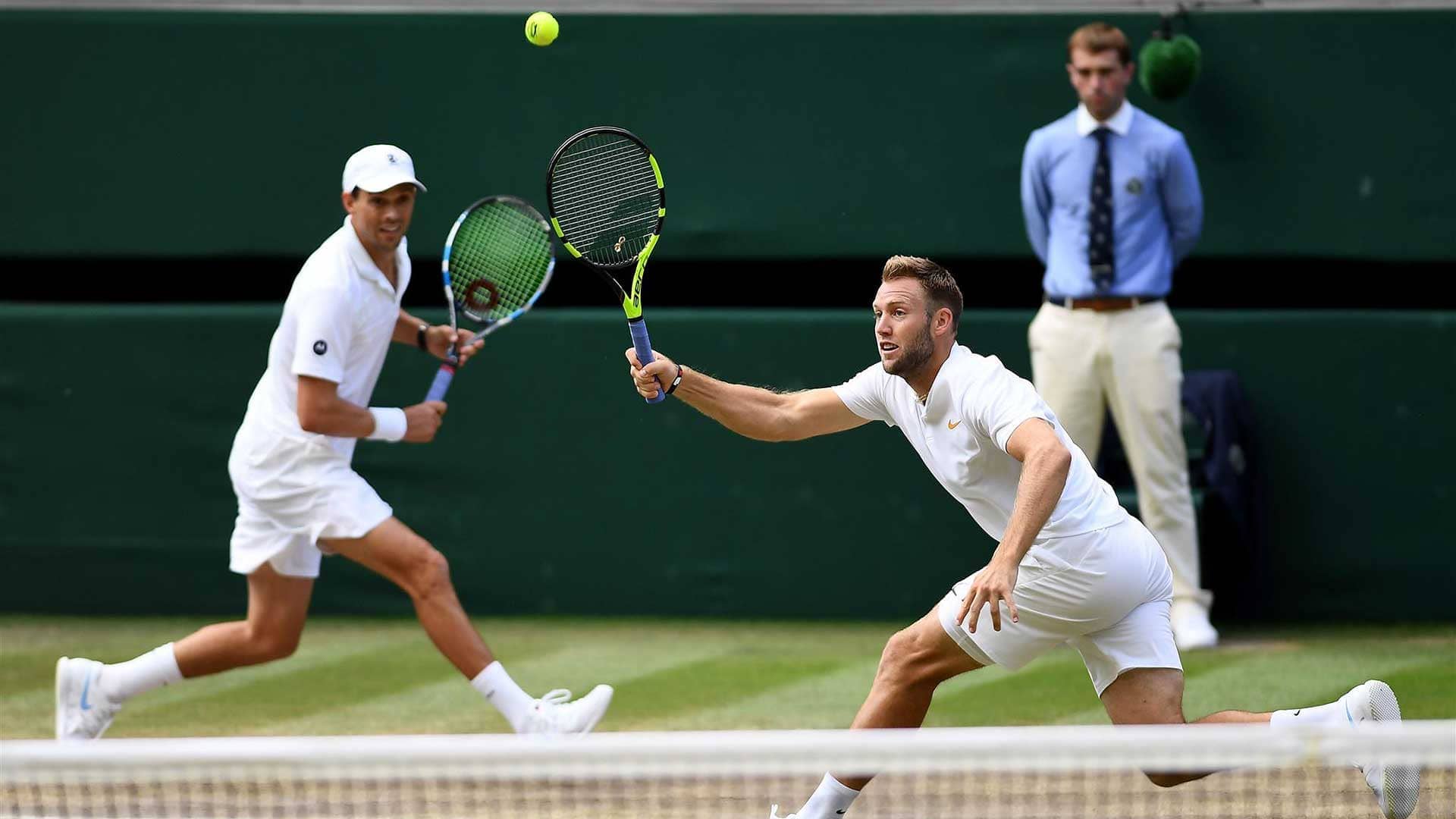 For Sock, it was the 25-year-old's second major title, following his maiden triumph with Vasek Pospisil at Wimbledon in 2014. With the win, Bryan and Sock become the third and fourth players to triumph at the All England Club with multiple partners in the Open Era, joining only Todd Woodbridge (w/Woodforde & Bjorkman) and John McEnroe (w/Fleming & Stich).

The drama boiled over on Centre Court on Saturday evening. Sock dictated with his biggest weapon in the first set, riding his forehand as he and Bryan took the opener 6-3. The former champions looked to be in prime position to run away with the final showdown, but after saving three break points midway through the second set, Klaasen and Venus showed their mettle.

The South African-Kiwi duo denied a set point en route to snatching the second set tie-break 9/7, as a Klaasen drop volley winner would draw the match level. It would prove to be a seesaw affair, with the lead vacillating from one side to the other. Sock pummeled his forehand down the line in the third set, forcing an error from Venus to grab an immediate break for 2-0. But after taking a two-sets-to-one advantage, the all-American tandem conceded the lead once again.

With Bryan serving to stay in the fourth set at 5-6, the 40-year-old saved a trio of break points - including one on an ace and another on a sublime drop volley by Sock - before surrendering the set in dramatic fashion. A foot fault would send the final to a decider.

As sunset descended upon the All England Club, the roof would be closed for the fifth set. Bryan and Sock would take full advantage, eventually seizing the deciding break for 6-5 in front of an electric atmosphere on Centre Court. They would close out the title in the next game, emerging victorious after a tense three hours and 39 minutes to earn a share of £450,000 and add 2,000 ATP Doubles Rankings points to their tallies.

"Our energy was positive the whole time," Bryan added. "We never got down. There's a lot of times where we could have been negative, but we kept pumping each other up. Jack always keeps you in the point. When you think it's over, he just is flying. His legs, he's as quick as anyone. He's 25 years old, has blazing speed. His forehand is one of the scariest in the game. I think a lot of these guys fear that shot. He probably hit 500 winners on that thing this week. I was seeing it just whizz by my ear for two weeks. He has a lot of RPMs. It's fun to hear."

It marked the Americans' second straight five-set victory, after needing eight match points to defeat Dominic Inglot and Franko Skugor on Thursday. They also prevailed 7-5 in the fifth set against German qualifiers Kevin Krawietz and Andreas Mies in the third round.

For Bryan, it was his fourth Wimbledon title, having won with brother Bob in 2006, 2011 and 2013. He lifted his first trophy at any level without his twin since 2002, when he prevailed at the ATP World Tour stop on Long Island with Mahesh Bhupathi. Moreover, the California native extends his record title haul, adding No. 119 in his illustrious career.

Sock, meanwhile, continued his run of dominance on the doubles court in 2018. All four of his titles this campaign have come with different partners, having prevailed on the hard courts of Delray Beach and Indian Wells with Jackson Withrow and John Isner, as well as on the clay of Lyon with Nick Kyrgios. He lifted his 12th tour-level doubles trophy in total.

"It means a lot," said Sock. "I had a taste of it in 2014, unfortunately against these guys. But obviously I think that gave me some confidence and experience to go out on Centre Court again. I hadn't been out there too many times. Obviously same pressure, same feeling out there.

"But to have a guy, half of the greatest team of all time to ever play the sport, alongside you only gives you that much more confidence, that much more experience, wisdom, everything.

"It gives me a sense of comfort out there. I can relax. I mean, I'm always pretty relaxed when I play doubles. I know if I can stick to my gameplan out there, he's unbelievable at cleaning up at the net, and doing all the basics of doubles. It means a ton."

On the other side of the net, 13th seeds Klaasen and Venus will hold their heads high after reaching their first Grand Slam final as a team. They are projected to crack the Top 8 of the ATP Doubles Race To London with their run to the title match. Earlier in the year, they lifted their first team trophy on the indoor hard courts of Marseille and reached the final on the grass of 's-Hertogenbosch.

Klaasen was bidding for his maiden major crown, while Venus was eyeing his second. The Kiwi previously triumphed alongside Ryan Harrison at Roland Garros last year. The finalists split £225,000 and earn 1,200 points apiece.