Mihail Youzhny is playing the final tournament of his career at the St. Petersburg Open.

Andrew Eichenholz
This article contains:
The Russian finished 13 straight seasons in the Top 50 of the ATP Rankings

Mikhail Youzhny’s career might not be defined by a single shot. The Russian never had a forehand like Juan Martin del Potro’s in his repertoire, and his one-handed backhand was never as devastating as Stan Wawrinka’s. But if nothing else, the Russian became synonymous with his victory salute, placing his racquet on his head after winning a match in tribute to his late father.

And in a way, that’s fitting. The 36-year-old, nicknamed ‘The Colonel’, has been a soldier on the ATP World Tour for nearly two decades, cementing his status as a consummate professional years ago, and flourishing in an era featuring some of the best players in tennis history. Youzhny now hangs up his racquets after falling in the second round of the St. Petersburg Open against Roberto Bautista Agut, completing a workmanlike career that saw him climb as high as No. 8 in the ATP Rankings.

“I can say I had a great career. I never thought I could play until 2018 and I can play at a high level,” Youzhny told ATPWorldTour.com. “I was one of the youngest guys from my age who went into the Top 100 and from all the times, I was at a high level. All the time I can say I was a professional, that’s why I maybe stayed later in the tennis career.”

Youzhny never stopped looking for ways to win. Whether it was on the court with his fighting spirit, or off of it, working as hard as possible day-in and day-out.

Typically, he’d spend his offseason in Thailand. But prior to the 2018 campaign, he spent four weeks in Marbella, Spain with his physio and doctor before returning to Moscow, where he resides.

“I didn’t have good results, I didn’t have too many wins, but I still practised, I still felt I can play, I can maybe have good results. But after Roland Garros, after Antalya, after Wimbledon, it was too many close matches for me that I lost, five sets, four sets, three sets with a close tie-break,” Youzhny said. “Even during the matches I could not play consistently really good and for me it was a little tough, too much up and down and it was tough for me to recover and for me I need recovery to be 100 per cent ready for the next match. This is one side. The second side, I think in my head about my kids, family, everything. I don’t want my kids now to live my life. I think now it’s time for me to live my kids’ life.”

Most Match Wins In History By A Russian

It will be a well-earned change for Youzhny. The 36-year-old tallied 31 Top 10 wins in his career, lifted 10 titles from 21 tour-level finals and finished inside the Top 50 of the year-end ATP Rankings in 13 consecutive years from 2002 to 2014. The Russian, who reached the US Open semi-finals twice falls one win shy of becoming the 10th active player and 46th in history to record 500 tour-level match wins.

Perhaps the match he will be remembered for was the live fifth rubber in the 2002 Davis Cup final, when Youzhny came from two sets down to stun Paul-Henri Mathieu and clinch the title for Russia. It was very much a soldier-like effort, battling in enemy territory under the most pressure possible at just 20 years old. Former Russian president Boris Yeltsin even swarmed him after the triumph. It was the perfect precursor to the career Youzhny would create. 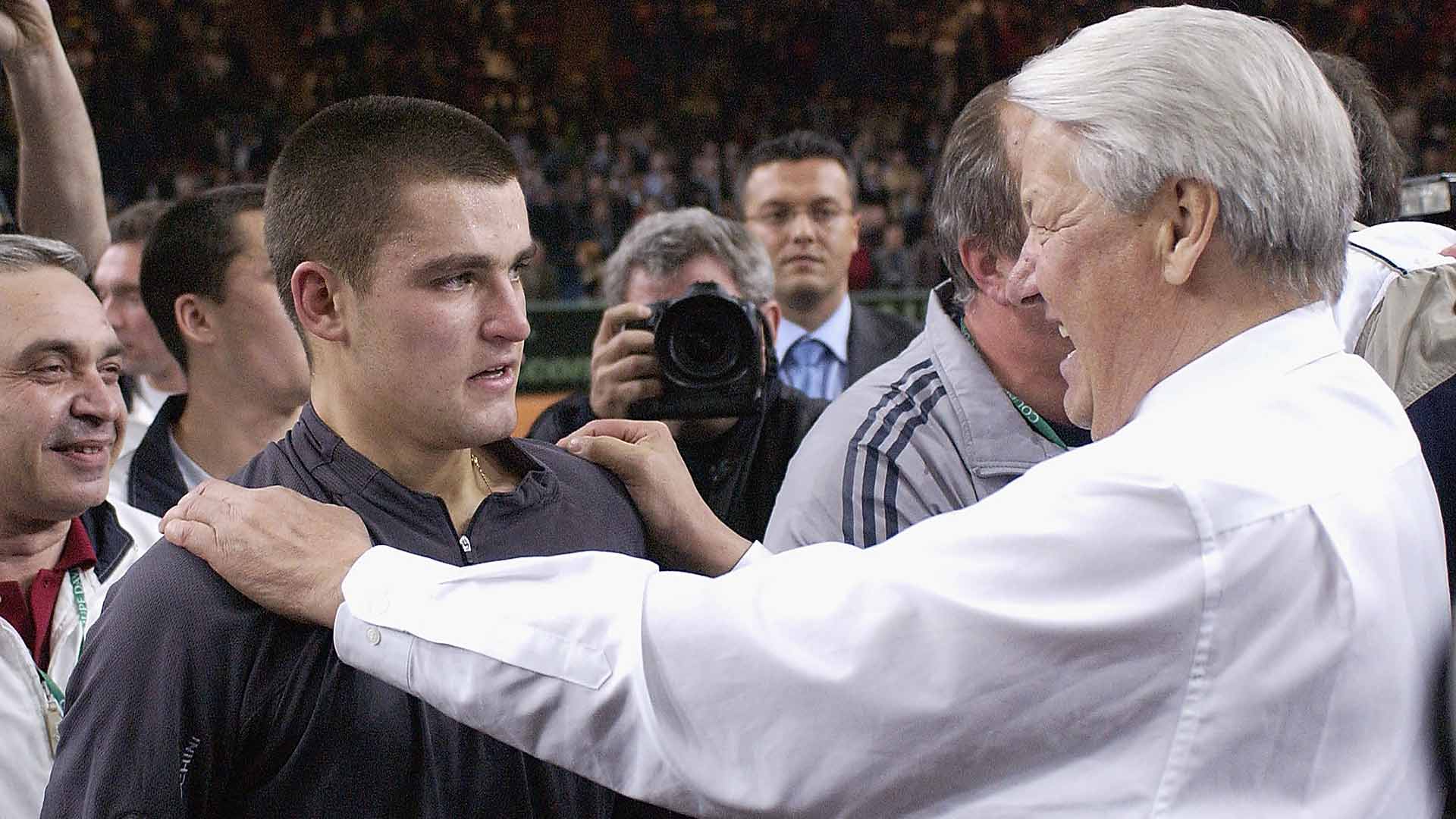 And if his efforts on the court don’t show enough about his character, just look at how he treated Evgeny Donskoy, a compatriot, but also a competitor. Donskoy began traveling with Youzhny and coach Boris Sobkin toward the end of 2014 after stopping his work with former World No. 1 Marat Safin. Outside of splitting travel expenses for Sobkin, Youzhny would not take any money from his countryman.

“When I got to the Top 100, I said to him, 'Man look I cannot feel like this, I can pay already, something to Boris at least,'” Donskoy said. “He was always writing to me... when a year ago I was losing at the Australian Open, I had some problems with my family, bad moments with my family, he was always with me and always was writing to me like, 'If you need anything, I can help you. I know that you are now a little bit down with confidence.' After that I beat Federer two weeks after.”

And he’s not the only one who feels that way. That sentiment stretches beyond the Russian contingent on the ATP World Tour, and to a younger generation, as well.

“Incredible person, first of all. Him, his coach Boris as well, have been some of the kindest people to me since I broke out on tour,” said former World No. 3 Milos Raonic. “He’s always around, he always finds opportunities, creates opportunities for himself, plays well and he’s been a real pleasure to have on tour.”

One may wonder just how successful Youzhny would have been if he did not have to compete against the likes of Roger Federer, Rafael Nadal and Novak Djokovic for virtually his entire career. But the Russian sees those rivalries as a blessing, not a curse, despite winning a combined seven of 44 FedEx ATP Head2Head meetings against the trio.

“I played at a great time I think, because I can say I played against some of the best players in the world in our era. There was Federer, Nadal, Djokovic, so I cannot give you one player who I can say this guy was the greatest I played,” Youzhny said. “All matches are different, some matches were dramatic for me, some matches were amazing. But still, I was involved with the best players in the world and it wasn’t for just one or two years, it was all of my tennis career.”

Over nearly two decades on the ATP World Tour, Youzhny learned plenty, perhaps too much to sum up in one lesson. But one thing he is taking away from his career reflects what the Russian became known for, and it can apply to all walks of life.

“If you really want to do something, and you give 100 per cent of your time to this goal, you’ll have a chance to receive back from your investment,” Youzhny said.

You May Also Like: My Masters 1000: Mikhail Youzhny
Youzhny never threw himself under the spotlight, but he was always a reliable force on the circuit. Armed with his one-handed backhand — with which he followed through with two hands — and a simple forehand stroke, the Russian was a tough out for all opponents.

“I just tried to fight until the end of the match,” said Youzhny, reflecting on what he should be known for. “But I cannot change the mind of the people and this is passed already, I cannot change it.”

It’s safe to say that Youzhny doesn’t have to. Now that he has struck his final shot in St. Petersburg, it is the tennis world's turn to salute Youzhny.

We salute YOU, Mikhail Youzhny! 😄

Send "The Colonel" a salute to congratulate him on a successful career and retirement 🙋‍♂️ pic.twitter.com/P6V8Who6Ya

What They Said About Youzhny:

Tomas Berdych
“I remember him since I started on the tour, and that’s already quite a few years… He’s a guy who has been around for a while. He’s achieved a lot and he was always a very, very tough opponent for me.”

Karen Khachanov
“When he was at his best form he was playing really well, beating top guys and was a Top 10 player at a time. He is a good example for Russian players. He won the Davis Cup two times. When he was younger, he was faster and hit flatter and more powerful, but he was always tough to beat. He and his coach, Boris, were always helping and following me, giving me good advice. He has been a great influence.”

Nicolas Kiefer
”I saw him and my first question was always, ‘You’re still around? You’re still playing?’ He said, ‘Yeah, well I love this sport and it’s great.’...As you can see, he’s very competitive, but he also enjoys it.”