Alexander Zverev improves to 6-0 in his ATP Head2Head series against Kevin Anderson.

Alexander Zverev has contested numerous five-set battles in the opening rounds of Grand Slam events, but the World No. 7 avoided such an opening to his US Open campaign with an impressive win on Monday.

The fifth seed faced a serious challenge against 2017 runner-up Kevin Anderson on Arthur Ashe Stadium and he rose to the occasion, recording a 7-6(2), 5-7, 6-3, 7-5 victory after three hours and seven minutes. It was Zverev’s first victory since the resumption of the ATP Tour, having lost his opening match at the Western & Southern Open to former World No. 1 Andy Murray.

”I am actually quite happy with a first round like that,” said Zverev. “Kevin is not someone you usually play in a first round. This is a fourth round, quarter-final, semi-final match normally against him. I am extremely happy to be through.” 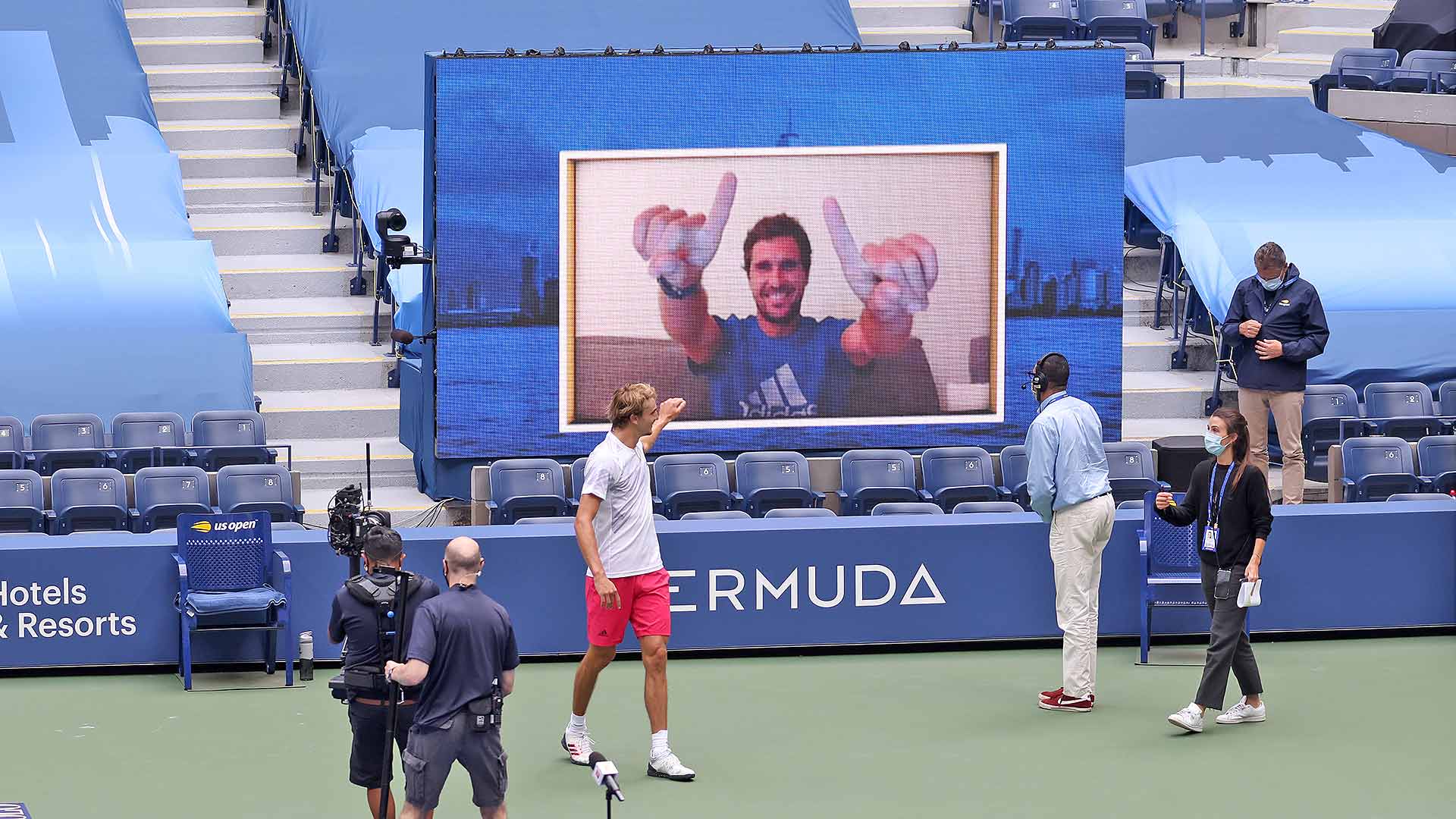 After the match, Zverev celebrated the win by having a quick video conversation with brother Mischa Zverev via an LED board behind his seat. With player entourages strictly limited this year due to COVID-19, the USTA is providing players with the opportunity to interact in real time.

"For a first round, it was okay," Alexander replied.

"I am sitting on my couch watching tennis. This is very relaxing for me. I could get used to this," the older Zverev joked.

Alexander added: "I'll be sitting in my suite for the next two matches as well. That is actually kind of cool as well. It is actually much nicer having you here than you sitting on a couch and seeing you through a screen, but what can I do?"

Big bro Mischa was on-court from a distance to support @AlexZverev after his win. pic.twitter.com/zk2U1JULE6

Zverev is one of the leading contenders to capture his first major title at this event. Only three Grand Slam champions are competing in the main draw in New York: 17-time major titlist Novak Djokovic, three-time Grand Slam winner Murray and 2014 champion Marin Cilic. In his most recent major appearance, Zverev reached his first Grand Slam semi-final at this year’s Australian Open.

You May Also Like: After 58 Break Points, Norrie Saves 2 M.P. To Stun Schwartzman

Zverev improves to 6-0 in his ATP Head2Head series against Anderson, who underwent right knee surgery on 19 February. The German will next face #NextGenATP American Brandon Nakashima, who defeated Paolo Lorenzi 6-3, 6-2, 7-6(3), for a spot in the third round.

After splitting a competitive opening two sets, Zverev won five straight points on his opponent’s serve to break for a 3-1 third-set lead. The German used his forehand to push Anderson behind the baseline and moved up the court to clinch the break with a delicate backhand drop volley. The 2018 Nitto ATP Finals champion, who won five of six net points in set three, held to love at 5-3 to move one set from victory.

”[My volley] is something that I worked on in these six months,” said Zverev. “It was my serve, my volleys that I worked on. In the [Western & Southern Open] match, I thought I did those two things well until the really important moments and I wanted to do it differently to finish off the match today.”

In a fourth set dominated by serve, Zverev converted the only break point of the set at 5-5. The 11-time tour-level titlist capitalised on multiple errors from Anderson to serve for the match and held to love to improve to 8-5 at the major championship.