Alexander Zverev and Mischa Zverev have won two ATP Tour doubles titles together and reached five more finals. But third seeds Raven Klaasen and Oliver Marach eliminated the Germans 2-6, 6-4, 10-6 in the first round of the bett1HULKS Indoors on Tuesday.

Klaasen and Marach saved 11 of the 14 break points they faced, including all eight in the second set, to triumph after one hour and 23 minutes. The South African-Austrian duo was 1-5 after the ATP Tour's restart before their victory in Cologne. Ironically, their one previous win since August came against Alexander Zverev (w/Tim Puetz) at the Western & Southern Open.

Klaasen and Marach will next play Spaniards Alejandro Davidovich Fokina and Fernando Verdasco or Germans Daniel Masur and Rudolf Molleker.

Also advancing in Cologne were Dominic Inglot and Aisam-Ul-Haq Qureshi, who beat Nicholas Monroe and Benoit Paire 6-3, 6-4. In the other doubles match of the day at the ATP 250, Tomislav Brkic and Marin Cilic ousted Hubert Hurkacz and Steve Johnson 6-0, 6-1.

Melzer/Roger-Vasselin Advance In St. Petersburg
Second seeds Jurgen Melzer and Edouard Roger-Vasselin reached the second round of the St. Petersburg Open with a 6-2, 7-6(3) win against qualifiers Evgeny Donskoy and Roman Safiullin. They will next play Russian wild cards Daniil Golubev and Evgenii Tiurnev. 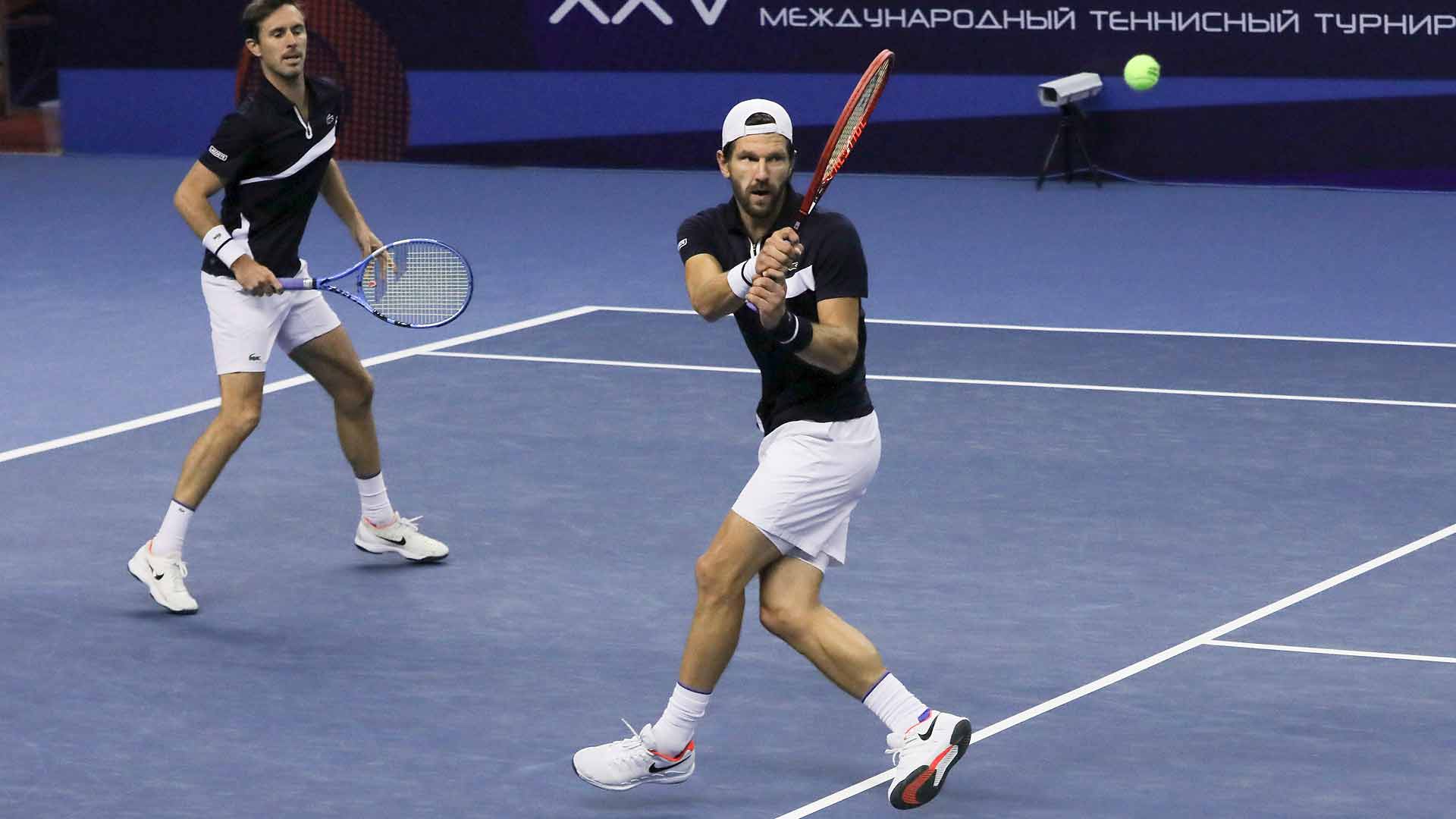 Edouard Roger-Vasselin and Jurgen Melzer break serve four times to reach the second round in St. Petersburg. Photo Credit: St. Petersburg Open
Sonego/Vavassori Save 10 Match Points In Sardinia
It's not every day a team saves 10 match points on the ATP Tour. Italians Lorenzo Sonego and Andrea Vavassori did just that at the Forte Village Sardegna Open on Tuesday, battling past countrymen Fabio Fognini and Lorenzo Musetti 6-7(3), 7-6(5), 15-13.

Fognini and Musetti had seven match points before the second-set tie-break, but could not convert. They earned three more chances in the Match Tie-break, but ultimately fell short after two hours and 11 minutes.

Third seeds Marcus Daniell and Philipp Oswald, finalists at the ASB Classic in January, opened their Sardinia campaign with a 6-2, 6-1 win over Spaniards Albert Ramos-Vinolas and David Vega Hernandez. They won 60 per cent of their return points in a 53-minute victory, setting up a second-round clash against Artem Sitak and Igor Zelenay.