Stefanos Tsitsipas and Alexander Zverev wrote another gripping chapter in their 2022 clay-court rivalry at the Internazionali BNL d'Italia on Saturday afternoon, with fourth-seeded Tsitsipas running out a 4-6, 6-3, 6-3 winner in the semi-finals in Rome.

In the third clay-court ATP Masters 1000 semi-final between the pair this season, Tsitsipas recovered from the disappointment of losing a hard-fought opening set to complete a stirring comeback win and reach the final in the Italian capital for the first time.

“He wasn’t giving me much, he made me work hard for every single point," said Tsitsipas after the match. "I’m extremely proud of the way things turned around, and I was able to read the gameplay a little bit better and understand what was working at that time.”

The victory was Tsitsipas’ 31st of 2022, extending his lead over second-placed Carlos Alcaraz (28) on the leaderboard for most match wins for the season. His run to the semi-finals in Rome has moved the Greek up one place to No. 4 in the Pepperstone Live ATP Rankings, and Tsitsipas' outstanding form on the clay has put him among the favourites for the French Open at Roland Garros in a week's time.

The Greek was particularly strong on serve throughout against Zverev and stayed consistent from the baseline to halt his opponent’s early momentum in an engrossing two-hour, 29-minute win. Tsitsipas was delighted to have made it a maiden championship match in Rome, having suffered semi-final disappointment against Rafael Nadal in 2019.

“It’s one of those tournaments that I think has the most history in sport," said Tsitsipas. "As you can see looking around the sides, one of the most beautiful stadiums. There’s a lot of history playing on these courts and you feel very proud that you made your way here and are able to participate in such a historically rich event.”

Tsitsipas was a straight-sets winner over Zverev en route to the title at the Rolex Monte-Carlo Masters in April, but the German exacted revenge for that semi-final defeat with a three-set win in the final four at the Mutua Madrid Open a week ago. Tsitsipas and Zverev are the only players to reach the semi-finals at all three ATP Masters 1000 tournaments on clay this season, meaning anticipation was high for a blockbuster clash at the Foro Italico.

A high-quality start saw no break points in the opening six games, with both players demonstrating the impressive serving that has powered their strong form on the clay this year. It was Zverev who made the first move, converting the only break point of the set for 4-3, and the German found enough first serves to resist a Tsitsipas fightback as he clinched an entertaining first set.

As in Madrid last week, Tsitsipas was able to recover from dropping the opening set to generate a momentum swing in the second. The Greek was aided by a lapse in Zverev’s level, however, with the second seed double faulting to hand Tsitsipas an early break for 2-0. Although Zverev deployed his first serve to good effect to fend off Tsitsipas’ efforts to break again, the Greek remained comfortable behind his own delivery to force a decider.

Although he competed well throughout, Zverev was never quite able to regain the consistency in his groundstrokes from the first set. Tsitsipas' ballstriking remained solid rather than spectacular, but that proved enough to break the German twice more as the Greek ran out a comfortable winner in the deciding set.

The Conversion and Steal scores for the third set reflect how clinical Tsitsipas was in taking his opportunities at the tailend of the match. The Greek won 70 per cent of points from attacking positions in the deciding set, while also finding a way to win 48 per cent of points from defensive ones as he outscored his opponent in both departments. 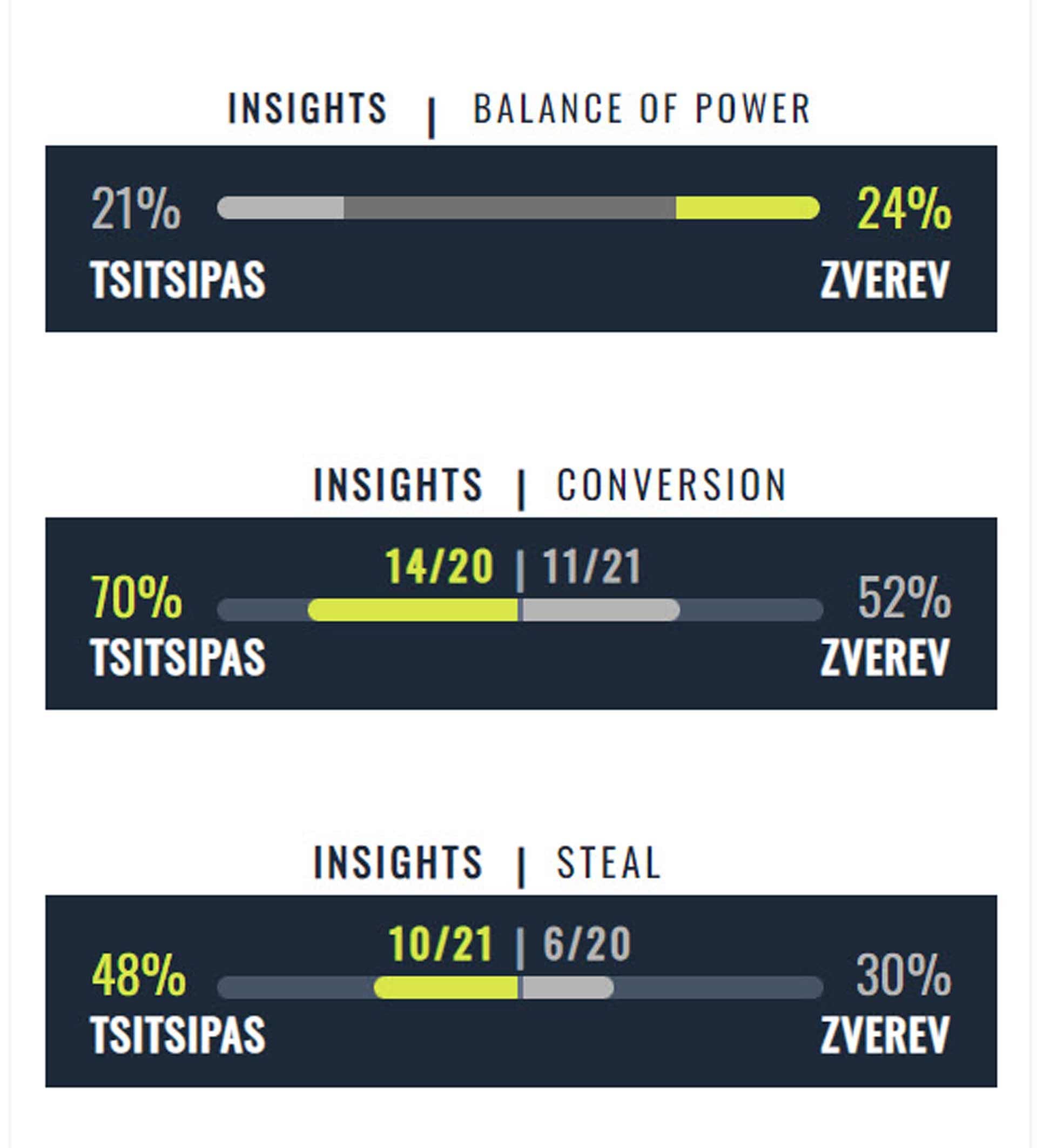 The win extends Tsitsipas’ ATP Head2Head series lead over Zverev to 8-4. The Greek will play for a third Masters 1000 title in Sunday’s championship match, where his opponent will be World No. 1 Novak Djokovic.