The ATP has announced the largest single-year increase in player compensation in its history. The $37.5 million increase takes total compensation at ATP Tour and ATP Challenger Tour events to $217.9 million for the 2023 season, an all-time record.

Players will receive an increase of $18.6 million of on-site prize money paid out across the ATP Tour, led by the expansion of three ATP Masters 1000 tournaments from eight to 12-day events. A further two ATP Masters 1000 events are set to expand in 2025, creating more days of action and playing opportunities at top-tier ATP events.

The record increase also includes a significant uplift on the ATP Challenger Tour, which will see on-site prize money grow by 75 per cent, from $12.1 million to $21.1 million. It follows the announcement of sweeping Challenger Tour enhancements earlier this season designed to strengthen the sport’s pathway and player earning potential. 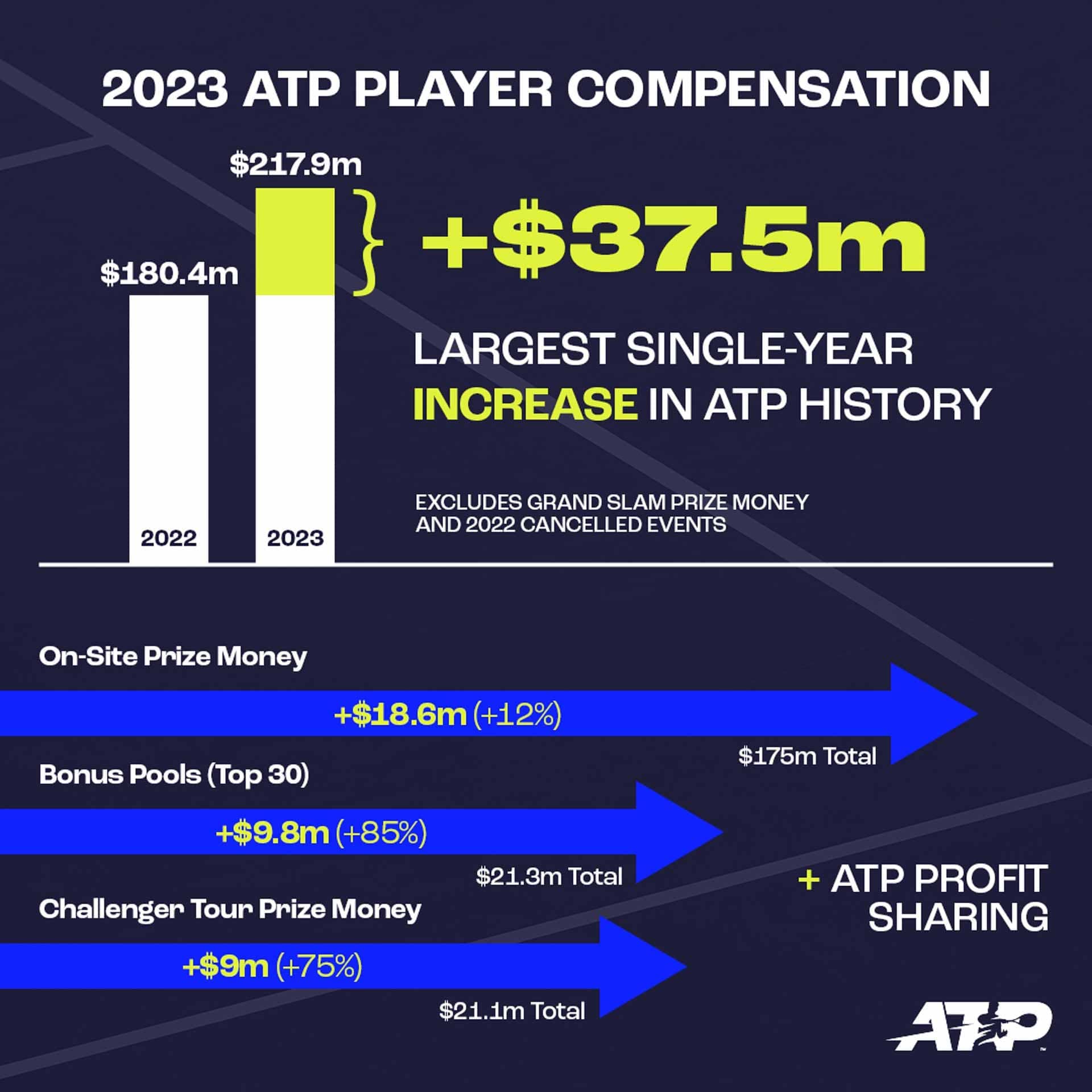 In addition, a revised bonus pool structure introduced through OneVision, ATP’s strategic plan, is set to deliver bonus pools of $21.3 million in 2023, a $9.8 million increase on 2022 (+85%), to an expanded group of top-performing players.

Increases will be bolstered by ATP’s newly established profit-sharing formula, also introduced through OneVision in 2022, under which players will share in the financial upside of the ATP Masters 1000 events. Any increases in Grand Slam prize money, which would further add to the player compensation figures, are yet to be announced for 2023.

ATP Chairman Andrea Gaudenzi said: “Our players are world-class athletes and it’s our priority to ensure they’re compensated accordingly. These record increases in 2023 are a strong statement for the ATP Tour and highlights our commitment to raising the bar in tennis. It also speaks to the collective progress we’ve been able to make as a sport under the OneVision strategic plan. There is immense potential for growth in our sport when we work together.”

The 2023 prize money increases follow the 2022 Nitto ATP Finals this week in Turin, which is offering record prize money of $14.75 million. This represents more than a 60 per cent increase on pre-pandemic levels.

The 2023 ATP Tour season kicks off from 29 December at the United Cup, a stunning new ATP-WTA team event played across three cities in Australia. It runs through to the Nitto ATP Finals in Turin and the Davis Cup Finals by Rakuten, which becomes an official part of the ATP Tour calendar from next season.