The Aix Allure: A Centre Court To Cherish

Josh Meiseles
This article contains:
The ATP Challenger Tour stop in Aix-en-Provence, France, features a packed centre court throughout the week, with former World No. 10 and tournament director Arnaud Clement leading the charge.

Step onto Court Central in Aix-en-Provence and it's impossible to not be smitten with its charm. The stadium seats a few thousand spectators, but its size is not what has the greatest impact at this ATP Challenger Tour stop.

On the ATP Tour, larger stadiums are the norm, with towering grandstands and sprawling sites beckoning throngs of fans to take in the action. But on the Challenger circuit, with tournaments predominantly located in smaller cities and suburban locales, venues carry an air of intimacy.

In Aix-en-Provence, these warm and cozy vibes embrace its visitors with open arms. Tucked in the southeast corner of France, the region of Provence is home to stunning coastal cities of Marseille, Nice and Cannes, but a short drive north - to the heart of the province - will bring you to quaint villages and beautiful mountainside towns.

Former World No. 10 Arnaud Clement is in charge of proceedings in Aix-en-Provence, serving as tournament director for all six editions. Born and raised there, the Frenchman is responsible for bringing professional tennis back to his hometown.

"For us, it was important to build a sponsor village close to the entrance that leads to centre court. We did that three years ago," said Clement. "It's a nice balance, with all the trees surrounding the court on three sides and then the tent with the village on the other. To make it a nice experience for both the fans and the players is important.

"I am proud, but we are still trying to improve every year. We can do better. When people come to me and say thanks for the great tournament in Aix-en-Provence, I'm proud that it's completely free. You don't have to pay to watch the tennis. Only two Challengers in France have that. If you're a family, you can come with your kids and enjoy this as a weekend activity. That makes me happy."

Welcome to Aix-en-Provence, where the fans love their sports as much as they do their wine and cheese. Bottles of rosé and wheels of camembert are passed from table to table as the locals enjoy lunch in the club's courtyard, before shifting to centre court for the featured matches of the day.

A crisp breeze whistles past, rustling the leaves that adorn the surrounding tree line, as plumes of clay are whisked from baseline to baseline. In a couple months, the scorching European summer sun will set the red dirt ablaze, but not this week. Near-perfect conditions greet the French faithful who file into Country Club Aixios for their annual ritual: watching world-class tennis at the Open du Pays d'Aix. 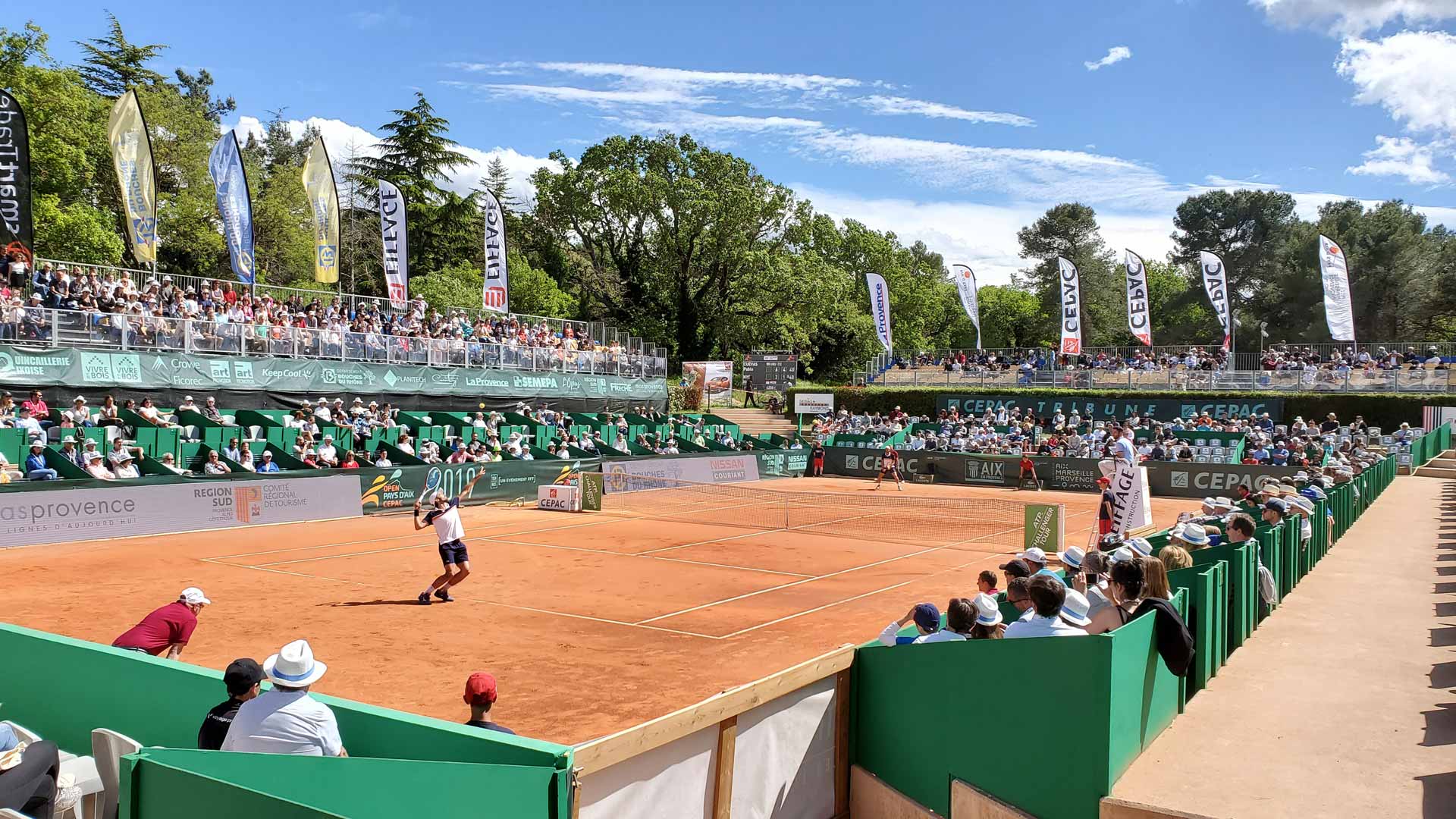 In the late 1970s and early 1980s the club hosted an ATP Tour event, featuring Ilie Nastase, Guillermo Vilas and Mats Wilander among its champions. And in the early 2000s, it played host to an ATP Challenger Tour event, with Rafael Nadal reaching the final in 2003. As the only tennis club in the area, Clement is proud that the Challenger circuit has found a home once again in Aix-en-Provence.

Now into its sixth edition, the 3,000-capacity centre court is constantly filled throughout the week, culminating in a jam-packed championship Sunday. In 2018, a total of 10,000 spectators passed through the gates. This year, he expects that number to grow even more.

In years past, the tournament has celebrated many future stars of the ATP Tour, with Diego Schwartzman, Frances Tiafoe and John Millman all lifting the trophy. World No. 4 Alexander Zverev also played there on two occasions. This year, Pablo Cuevas is the player making the most noise. Crowds have burst through the gates to catch a glimpse of the Uruguayan star, who eventually became the third straight Top 100 player to lift the trophy.

Speaking of the champion's silverware, Clement wanted the Provence region to have a significant influence in its creation. Local artist Atelier Saurel designed the trophy, which depicts the iconic mountain Sainte Victorie, a symbol of the city. 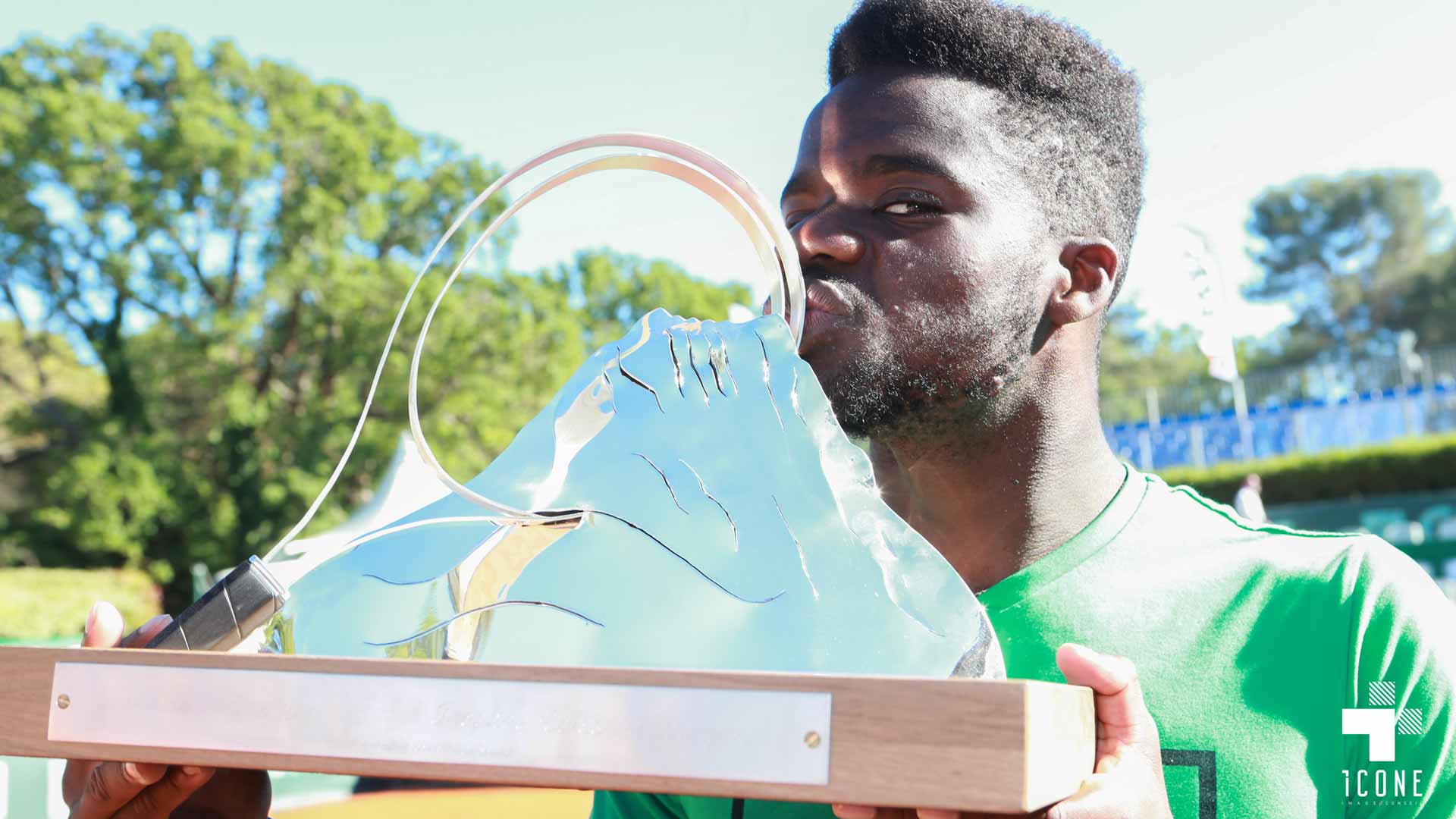 Tiafoe with the trophy in 2017

"It's very organized here, the transport is on time and the practise schedule is well coordinated," said two-time semi-finalist Elias Ymer, who made his fourth appearance this week. "They have plenty of courts. And the centre court is unbelievable. They have a great crowd all the time. It's a good atmosphere. It's like an ATP event on the centre court. They really support me because they know me over the years. I like it a lot."

"I think it's a very nice place. I was first here when I was 20 and have always had a good time here. I've made two semi-finals and usually have a good rhythm. And the draws are always very strong. This year, I played Barrere, Travaglia and then Cuevas before the semis of a Challenger. It's a super tough tournament."