ATP Chairman Andrea Gaudenzi presents Carlos Alcaraz with the year-end ATP No. 1 Trophy presented by Pepperstone on Wednesday in Turin.

Alcaraz: 'To Be Part Of Tennis History Is An Amazing Feeling'

ATP Staff
This article contains:
Spaniard celebrates year-end ATP No. 1 presented by Pepperstone at a ceremony at the Pala Alpitour in Turin

Carlos Alcaraz received a raucous reception Wednesday evening at the Pala Alpitour in Turin, where he received the ATP No. 1 Trophy presented by Pepperstone. The 19-year-old is the youngest player in history to earn the award.

"It means a lot to me," Alcaraz said. "To get this trophy, the World No. 1, to be part of tennis history along with a lot of legends, for me [it] is an amazing feeling."

You May Also Like: Alcaraz Youngest Year-End ATP No. 1 Presented By Pepperstone In History

The Spaniard was set to make his Nitto ATP Finals debut this week, but was forced to withdraw due to an internal oblique muscle tear in his left abdominal wall. He was still happy to take in the atmosphere of the season finale in Turin.

“I'm a little bit disappointed to not be able to play here in the Nitto [ATP] Finals. I really wanted to play here,” Alcaraz said. “These kind of things can happen in tennis life. But… at the same time I'm really grateful to lift this amazing trophy. It's an amazing achievement. All the hard work pays off. For me it's incredible to lift this trophy today."

Alcaraz is fully focussed on rehabbing to be in top form for the start of the 2023 season. The year-end World No. 1 gave a positive update on his status Wednesday. 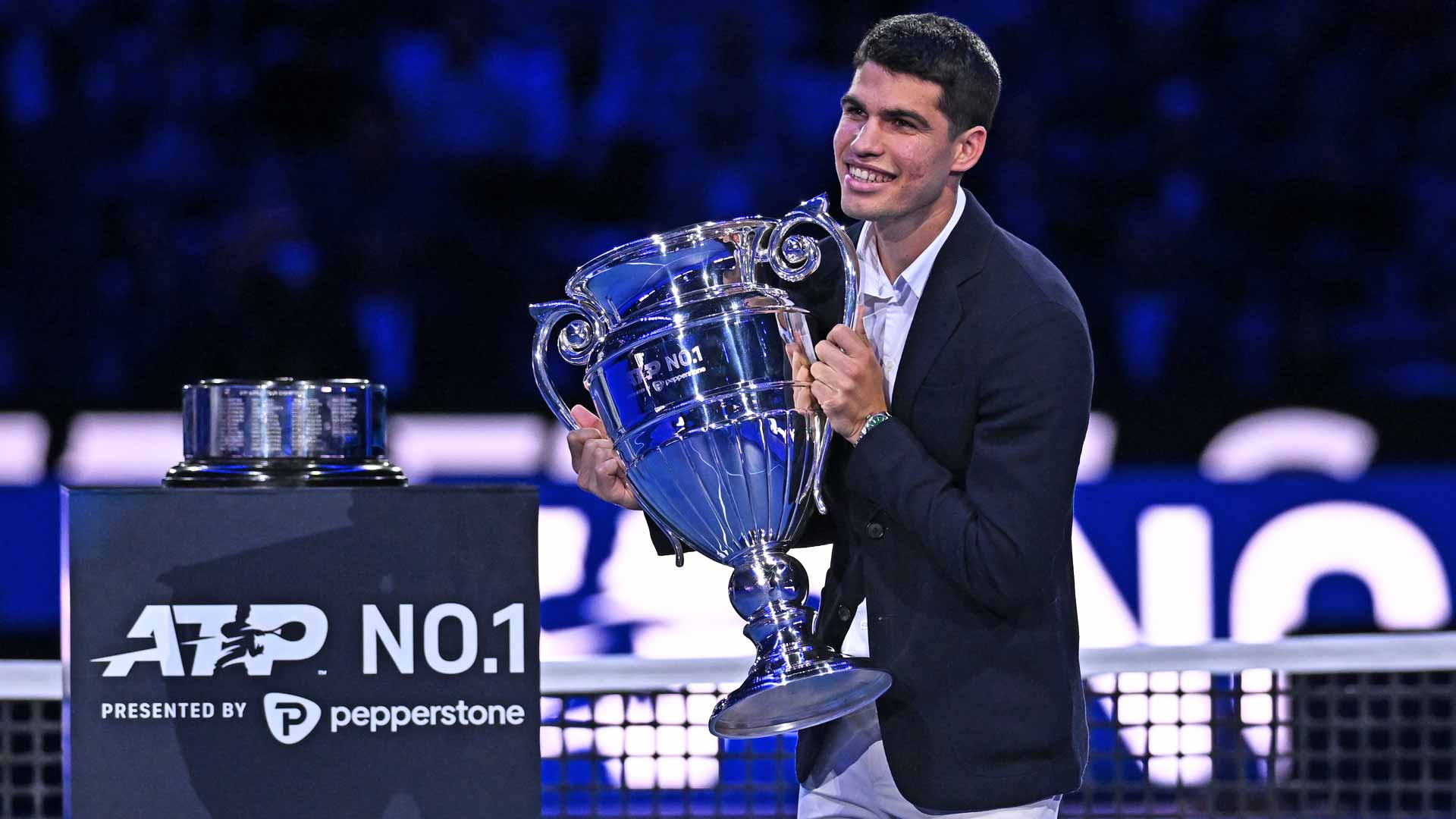 Photo Credit: Corinne Dubreuil/ATP Tour
Alcaraz added: “The first weeks after the injury, [it] is really important to [not] stop. That's what I did the week and a half that I spent, it was with a lot of exercise.”

The winner of this year’s US Open as well as ATP Masters 1000 titles in Miami and Madrid is enjoying a holiday “to disconnect a little bit, to take a rest”. But soon he will turn his attention to the preseason.

Until then, Alcaraz has his eyes on the Nitto ATP Finals, where the prestigious Brad Drewett Trophy is up for grabs.

“Of course I was watching the matches, not all of them, but a lot of them. I watch it from home. I mean, I always want to watch great matches, great level. So with these players here, it's 100 per cent,” Alcaraz said. “Here in the match, great shots, great rallies. I love to watch these kind of matches. Of course, having Rafa here, I root for him. I root for Spanish players. But I root for great tennis.”