Andrew Eichenholz
This article contains:
#NextGenATP star to play Thiem in the US Open quarter-finals

When Alex de Minaur was 11 or 12 he had the same Size 11 feet he has now, a decade later. The Aussie has admitted that growing up, he was even “clumsy”.

“I felt like a little bit of a little kid with clown shoes on,” De Minaur said. “I didn't have the best footwork, the best movement.”

Now the 21-year-old is one of the quickest players on the ATP Tour, tormenting opponents with his unrelenting defence and ability to track down aggressive shots for hours on end. On Monday, De Minaur used his speed to defeat Vasek Pospisil in straight sets and reach his first Grand Slam quarter-final at the US Open.

“This is where I want to be and this is where I truly believe I belong, [in the] second week of Slams and going deep,” De Minaur said. “I'm happy I'm finally at this stage.”

Pospisil noted that he believes Gael Monfils is the quickest player in the world. But the Canadian thinks De Minaur is right behind.

“He’s very quick and what’s most impressive is he never breathes. He runs side to side and he’s never out of breath. He defies the laws of biology,” Pospisil said. “It’s pretty impressive. He’s definitely a freak of nature and he’s extremely fit, never gets tired, runs side to side incredibly fast.” 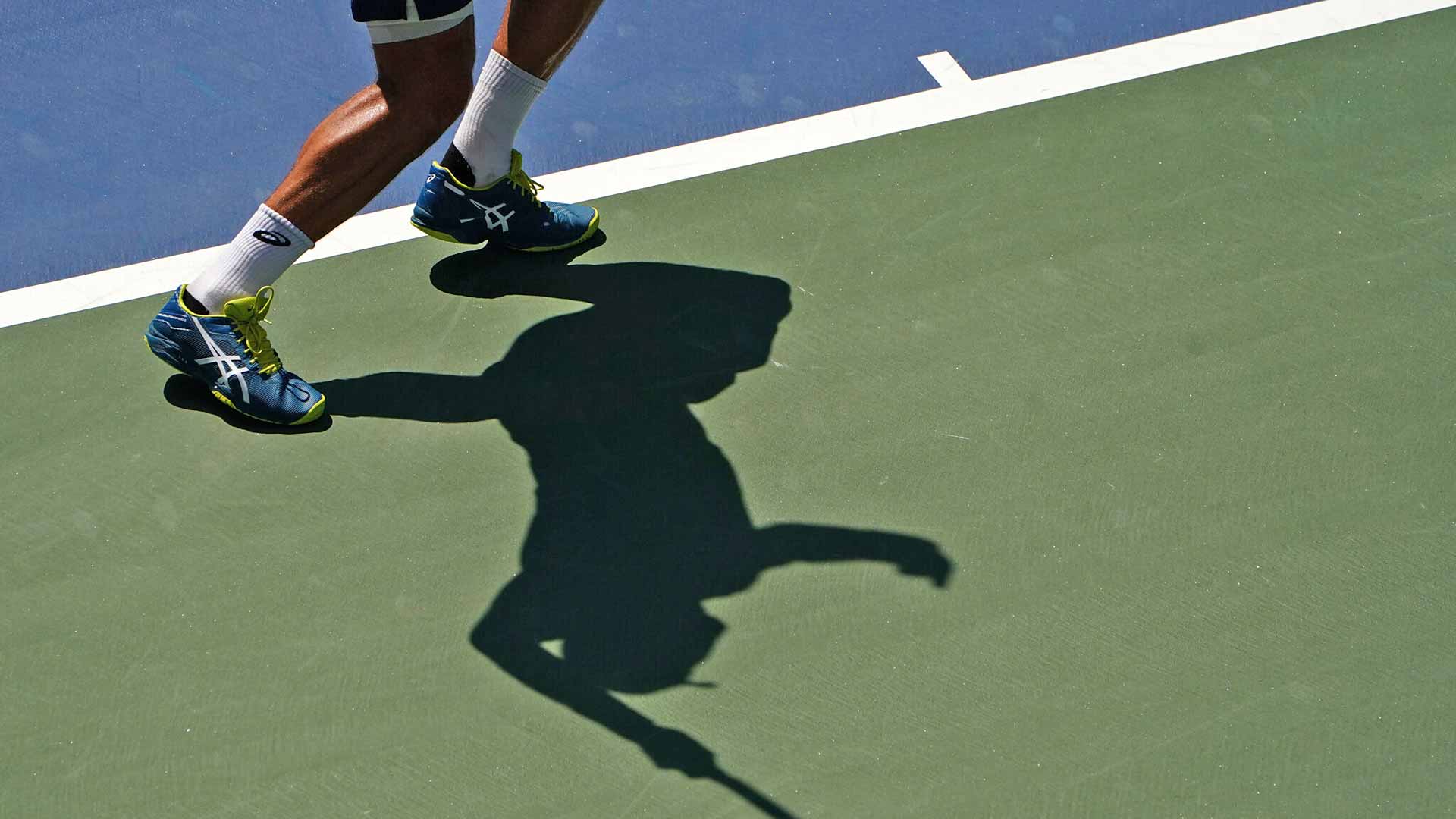 De Minaur wears size 11 sneakers. Photo Credit: Darren Carroll/USTA
It’s almost like De Minaur uses his speed to suffocate opponents. He forces players to win points several times before it actually goes on the scoreboard. The Aussie is also unafraid of quickly shuffling inside the baseline to take a crack at any ball that is left short.

“If I could definitely blast people off the court, then trust me, I would rather do that. This running thing gets tiring, that's for sure,” De Minaur said, cracking a smile. “I've got to deal with what God gave me. He didn't give me the best physique. I'm not as strong or as tall as other people, so I have to find ways to win. That's the way I win.

That has proven a tough task at this US Open. In the third round, 11th seed Karen Khachanov won eight consecutive games to take control of their match. But De Minaur never stopped running, ultimately rallying for a five-set victory.

For a “clumsy” mover who at one point felt he had “clown shoes on”, how has De Minaur developed his footwork into such a weapon on the sport’s biggest stages?

“It was just a lot of work, especially in technique of movement from a young age. Then me kind of just growing into my body, those two things together,” De Minaur said. “That's where I am right now, so I'm pretty happy with that.”

According to De Minaur’s coach, Adolfo Gutierrez, the Aussie was never as slow as he believes.

“Who knows him knows that he was very fast, always, since he was young,” Gutierrez said at the 2018 Next Gen ATP Finals. “It is true that his feet were a little bigger, flat feet, something that was quite funny, actually. But he has always been very fast and very agile.”

De Minaur will need every bit of his speed in the last eight against Dominic Thiem. The big-swinging Austrian will hammer every ball that comes his way. But on the other side, the Aussie will try to frustrate the second seed by putting those big blows back into play.

“[He’s] definitely one of the fastest players on Tour, but I think that he also is moving not only super fast, but also very accurately,” Thiem said. “That’s what makes his movement even better.”

Thiem leads the pair’s ATP Head2Head series 2-0, but both of their previous clashes came when De Minaur was a teenager. Their most recent meeting came in September 2018.

“He definitely developed more, especially physically, than I did [during that time]. I think he was only [18] at our first match at the US Open [in 2017]," Thiem said. "He was skinny, super fast back then already. But now he’s a man, he’s a super-experienced player already. It’s going to be a different story.”

De Minaur knows he has a massive opportunity, but he is only focussed on one point at a time. When the Aussie walks on court Monday for perhaps the biggest match of his career, he will not try to leap into the semi-finals. De Minaur will put one Size 11 foot in front of the other.

“Nothing changes. Everything stays the same,” De Minaur said. “Now I've got just another match waiting for me.”