Daniil Medvedev is congratulated by Novak Djokovic after winning his first major at the US Open.

ATP Staff
This article contains:
World No. 2 is third Russian man to win a major title

Daniil Medvedev made history and spoiled it simultaneously on Sunday, winning his first major title with a stunning 6-4, 6-4, 6-4 victory against Novak Djokovic in the US Open final, which prevented the World No. 1 from completing the Grand Slam.

The Serbian star was trying to become the first man since Rod Laver in 1969 to win all four majors in one season and break a tie with Roger Federer and Rafael Nadal for the most major titles in history (20 each). But Medvedev played calm, patient tennis to become the third Russian man to earn Slam glory, joining Yevgeny Kafelnikov and Marat Safin.

"You never know if you're going to achieve [winning a major] in your career. I was always saying if I don't, I just want to know that I did my best to do it," Medvedev said. "[I feel] a lot of happiness. That's my first Grand Slam. I don't know how I'm going to feel if I win a second one or third one. That's my first one, so I'm really happy. Means a lot to me."

After his semi-final win against Felix Auger-Aliassime, Medvedev vowed to take the fight to Djokovic in the final. "No matter the score, I'm just going to turn up the heat," he said. And he delivered as promised.

Djokovic appeared frustrated and flummoxed throughout what he said on Friday is, "arguably the most important one of my career, maybe". After letting slip opportunities to break his opponent's serve in his first two return games of the second set - including after leading 0/40 in his first return game - the Serbian obliterated his racquet. He never recovered.

Medvedev made his first major final two years ago at the US Open on the same court inside Arthur Ashe Stadium. On that occasion, the Russian suffered a heartbreaking five-set defeat against Nadal. But this time, Medvedev controlled the match from the first game and earned the biggest win of his career after two hours and 15 minutes.

"First of all I want to say sorry for you fans and Novak. We all know what he was going for today," Medvedev said during the trophy ceremony. "I've never said this anybody, but I will say it right now. For me, you are the greatest tennis player in history."

The 25-year-old double-faulted on his first championship point at 5-2 in the third set and lost serve for the first time in the match later in the game. The crowd got raucous to urge Djokovic back into the match from there, and Medvedev double-faulted again on his next match point. But the 13-time tour-level titlist, who admitted to cramping at 5-3, successfully served out the match at the second time of asking, falling to the court after Djokovic missed a backhand return into the net.

"It was definitely tough. [I] cannot say [it any] other way. I knew that the only thing I can do is focus," Medvedev said. "[You] never know what would happen if it would be 5-All, if I would start to get crazy or whatever. It didn't happen, so again we cannot talk about it. I knew I have to focus on myself, on what I had to do to win the match."

From 28 major matches this year, Djokovic lost the first set 11 times, including in five consecutive matches from the third round at Flushing Meadows. But this time he was unable to conjure a magical comeback to complete his historic run. During the final changeover, the Serbian cried into his towel as the moment hit him.

"I would like to say that tonight, even though I have not won the match, my heart is filled with joy and I'm the happiest man alive because you guys made me feel very special," Djokovic told the crowd. "You guys touched my soul. I've never felt like this in New York... I love you guys. Thank you so much for the support and everything you have done tonight for me. I love you and I'll see you soon."

Djokovic got off to a slow start in the first game of the match, missing consecutive forehands wide to give the World No. 2 an immediate service break. That was all Medvedev needed to speed through the opener in 36 minutes, during which he put on an impressive serving display.

The recent Toronto titlist, who has won 15 of his past 16 matches, saw 59 per cent of his serves go unreturned by Djokovic in the first set. That set the tone for the rest of the match. The Serbian began to find his range from the baseline later in the set, but was unable to bother the Russian, who won all 15 of his first-serve points in the opener. 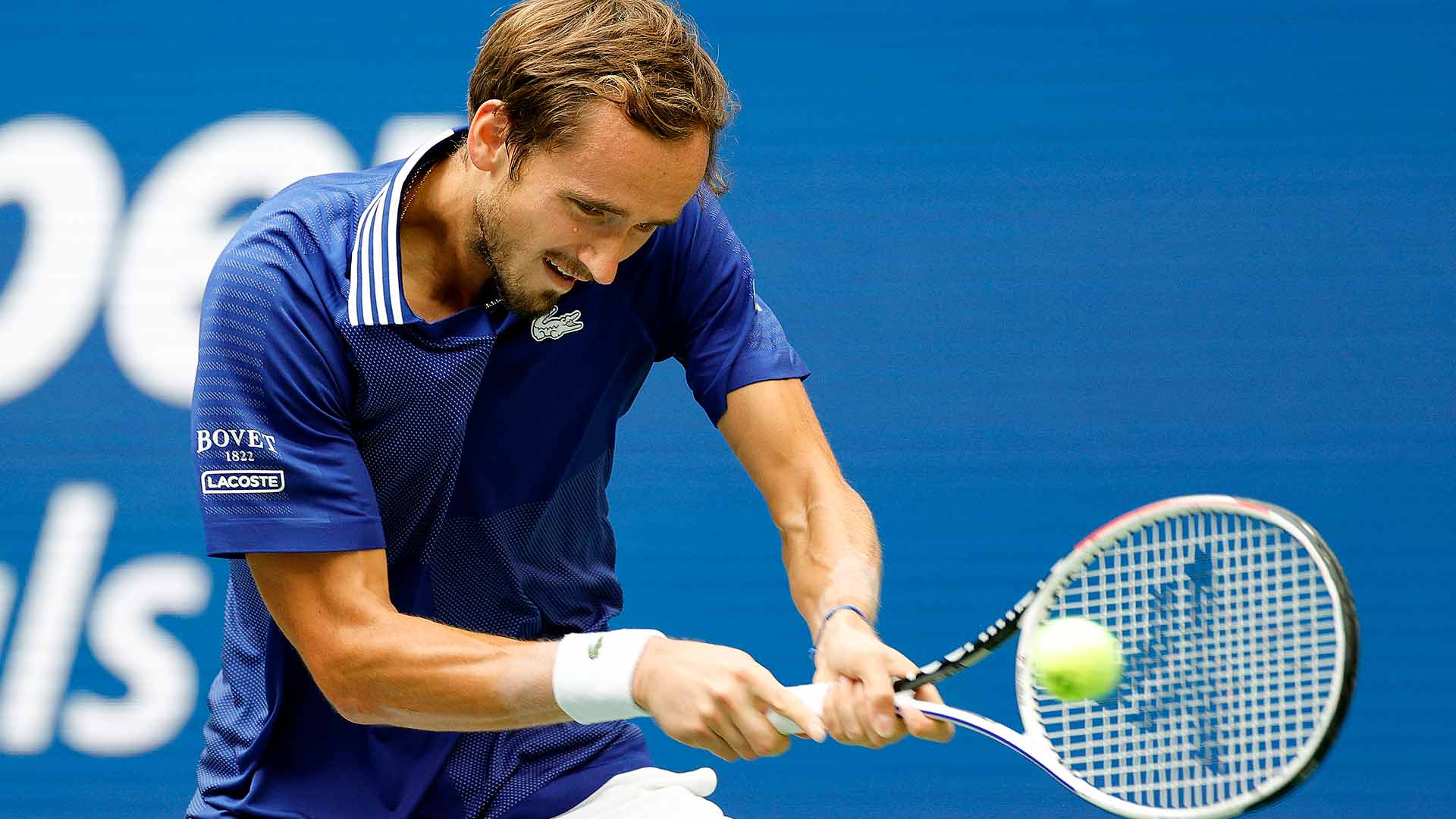 Photo Credit: Sarah Stier/Getty Images
Djokovic looked to quickly seize the momentum at the start of the second set, putting more returns in play to take a 0/40 advantage. The 85-time tour-level titlist was unable to convert though, missing a neutral backhand slice into the net on his last opportunity of the game.

The Serbian earned two more chances in his next return game. But Medvedev showed no fear, hitting a massive backhand down the line off his back foot to save one and crushing a big serve to save the other, leading to Djokovic's racquet smash.

Medvedev embraced the pressure of the moment throughout the match. The reigning Nitto ATP Finals champion played stout defence with great depth to force Djokovic to rush his offence. The top seed frequented the net far more often, while Medvedev was content to answer the questions Djokovic asked on court.

Before the match began, large groups of Serbian fans stood outside of Arthur Ashe Stadium chanting “Nole! Nole, Nole, Nole! Nole! Nole!” That pro-Djokovic support carried into the stadium as the fans gave the three-time US Open winner a noticeably louder ovation.

Many of us have scrambled at the last minute for an anniversary gift.

Many of us did not receive a $2.5 million check to solve the problem 😂

But Medvedev did not shy away from the environment, trying to rally them to his side as the match wore on. There were plenty of celebrities, from the likes of Alec Baldwin, Bradley Cooper, Spike Lee and Brad Pitt to sports stars Henrik Lundqvist, Andy Roddick Kim Clijsters and Laver. But Medvedev prevented them from witnessing the first Grand Slam by a man in 52 years.