Ricardo Rodriguez-Pace purchases a painting of himself from local artist Robert Roy in Drummondville.

Artistry Of A Challenger: All The Right Strokes In Drummondville

Josh Meiseles
This article contains:
A behind the scenes look at the ATP Challenger Tour event in Drummondville, Canada

At first glance, it was an unassuming meeting between two players outside the Top 500 of the FedEx ATP Rankings. Rodriguez-Pace, a 26-year-old from Venezuela, was competing in his first Challenger main draw in 10 months, having primarily battled on the ITF circuit. Toronto native Tiraspolsky, who celebrated his 18th birthday on Thursday, was making his professional debut. But, as the sixth edition of the Challenger Banque Nationale de Drummondville got underway, one man took particular interest in the encounter.

Local artist Robert Roy has been painting scenes from the tournament since its inception in 2015. The Drummondville native has captured the event's intimate, yet vivacious ambiance over the years, while profiling various players including Felix Auger-Aliassime. 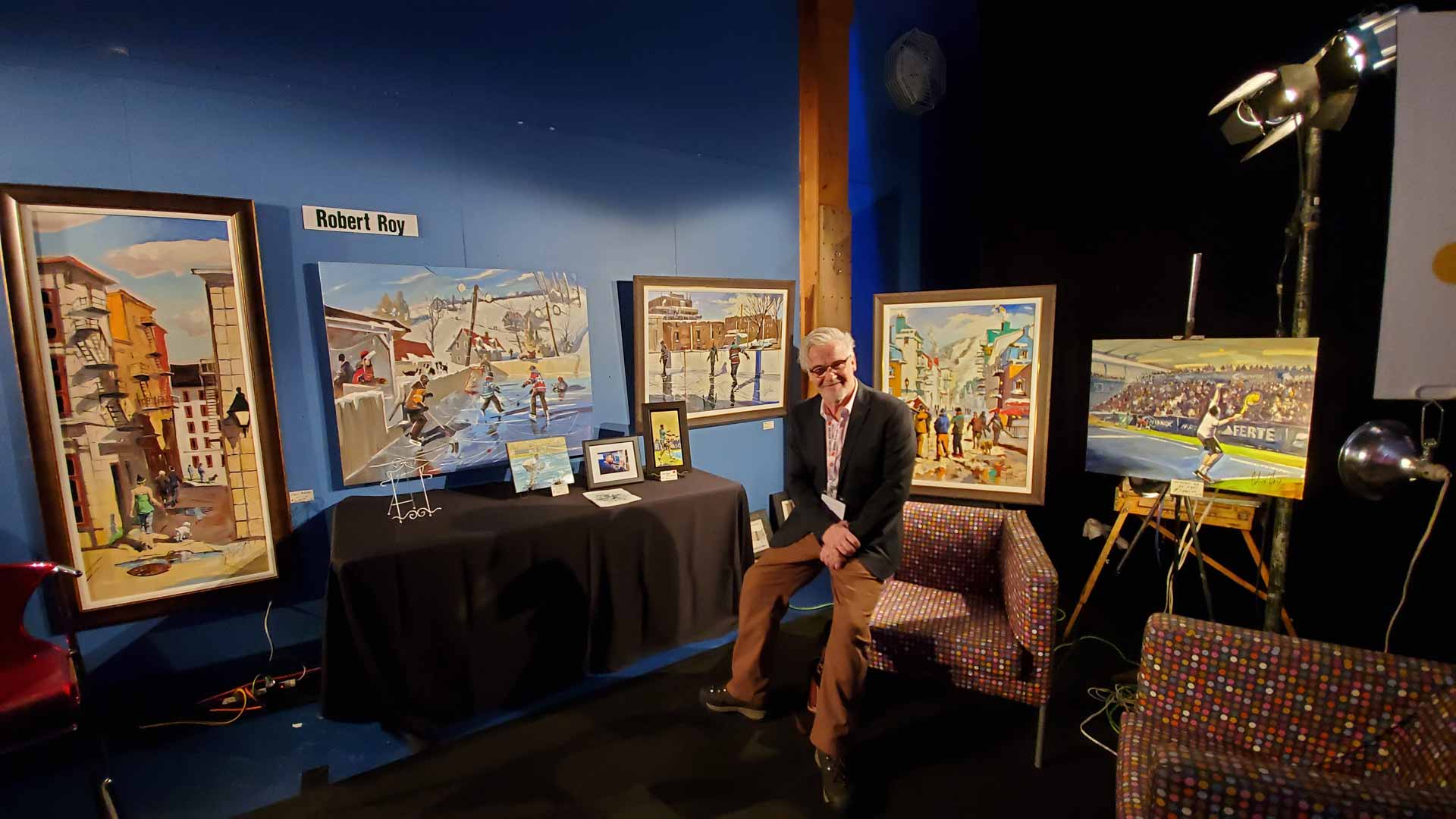 But, as Rodriguez-Pace and Tiraspolsky battled through a three-hour and 11-minute war of attrition, Roy admits that those matches are exactly what he prefers to depict above all. Physically and emotionally exhausted, both players left everything on the court as they fought for a coveted victory. Only a handful witnessed the encounter and Roy is proud to say he was one of the them. Matches like these, where the hunger to win is so palpable, are most appealing.

"Tennis is like painting. Both show a lot of passion yet are delicate in their own way," said Roy. "They are similar. When you paint, it involves the same dexterity as tennis. Both involve a lot of repetition of the same strokes."

Perched above the baseline, in the VIP boxes, Roy set out to capture the moment. 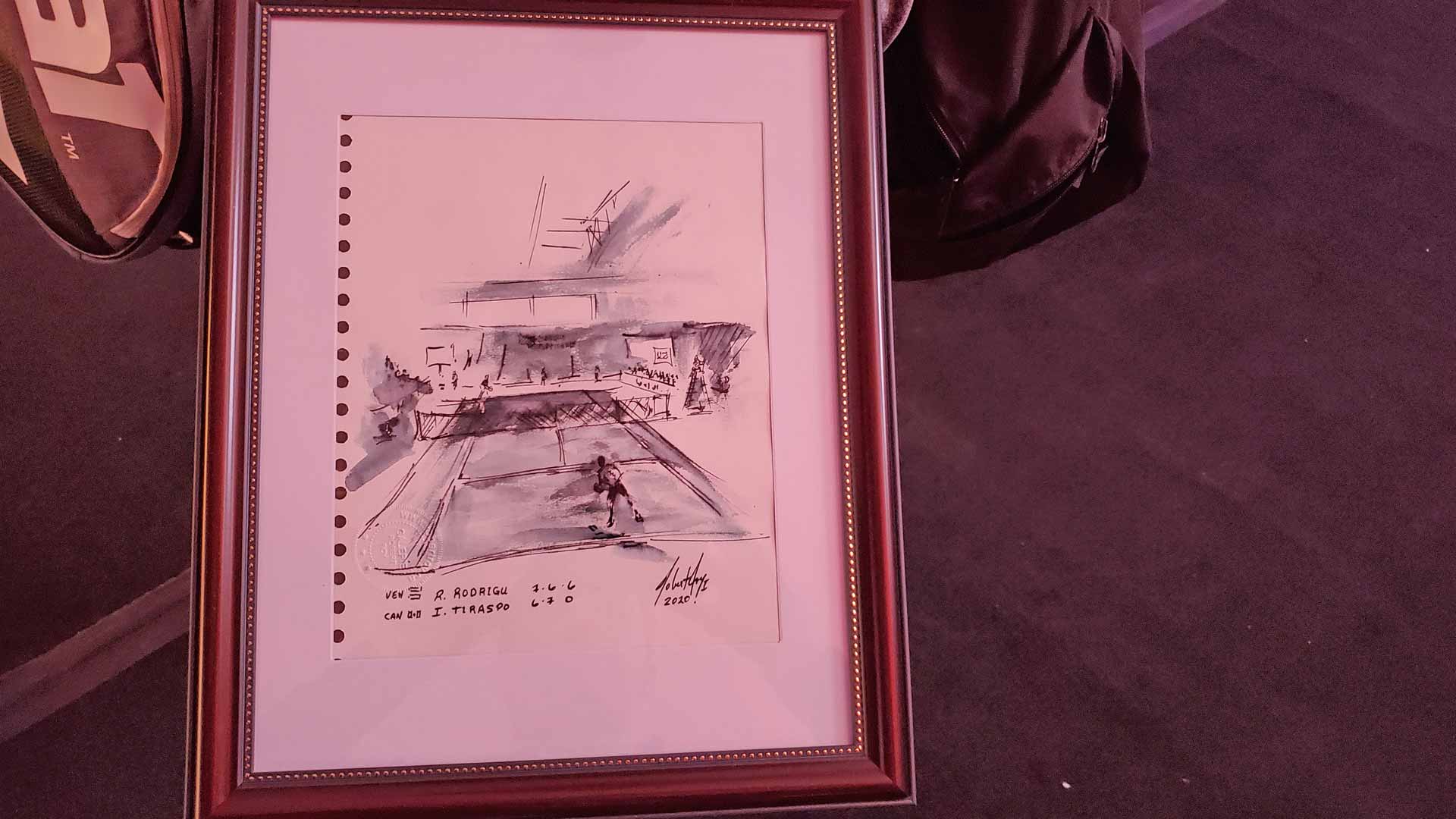 Later in the week, following a second-round defeat to eventual finalist Arthur Rinderknech, Rodriguez-Pace approached Roy in his booth. Stationed between the VIP room and the tournament's barista, Roy had his artwork on display all week. The price tag for this particular painting read $360, but on this day, making a profit was irrelevant. For the first time ever, a player was about to purchase one of his paintings.

"Players don't often approach me, but those that do are the most genial. I like that, when they take the time to say hi," added Roy, who accepted only $40 from Rodriguez-Pace. "They are the simple, humble players. Sekou Bangoura is another. They care and are sympathetic too. Everything is connected. I've never seen a player look as happy as Rodriguez."

The ability to establish connections between the local community and the players is what makes the Challenger circuit so special. Whether it be through local housing host families, tournament transport drivers and other volunteers, players often create lasting relationships with the communities they visit in their travels. Rodriguez-Pace's interaction with Roy was no different. The Venezuelan truly appreciated the moment.

"This is something I will show my kids one day," Rodriguez-Pace said of the painting. "I imagine the conversations I will have with them of my playing days. And this is one of those cute stories. My future kids aren't going to be interested in how many matches I won or aces I hit. These are the kinds of things that make it all worth it. We are on the road for so long and I really cherish something like this. This time, I was lucky for the painter to paint me. I will take this beyond my career for my personal life."

Rodriguez-Pace was born in Venezuela, but has a Spanish father and American mother. He is currently based in Florida with his wife. 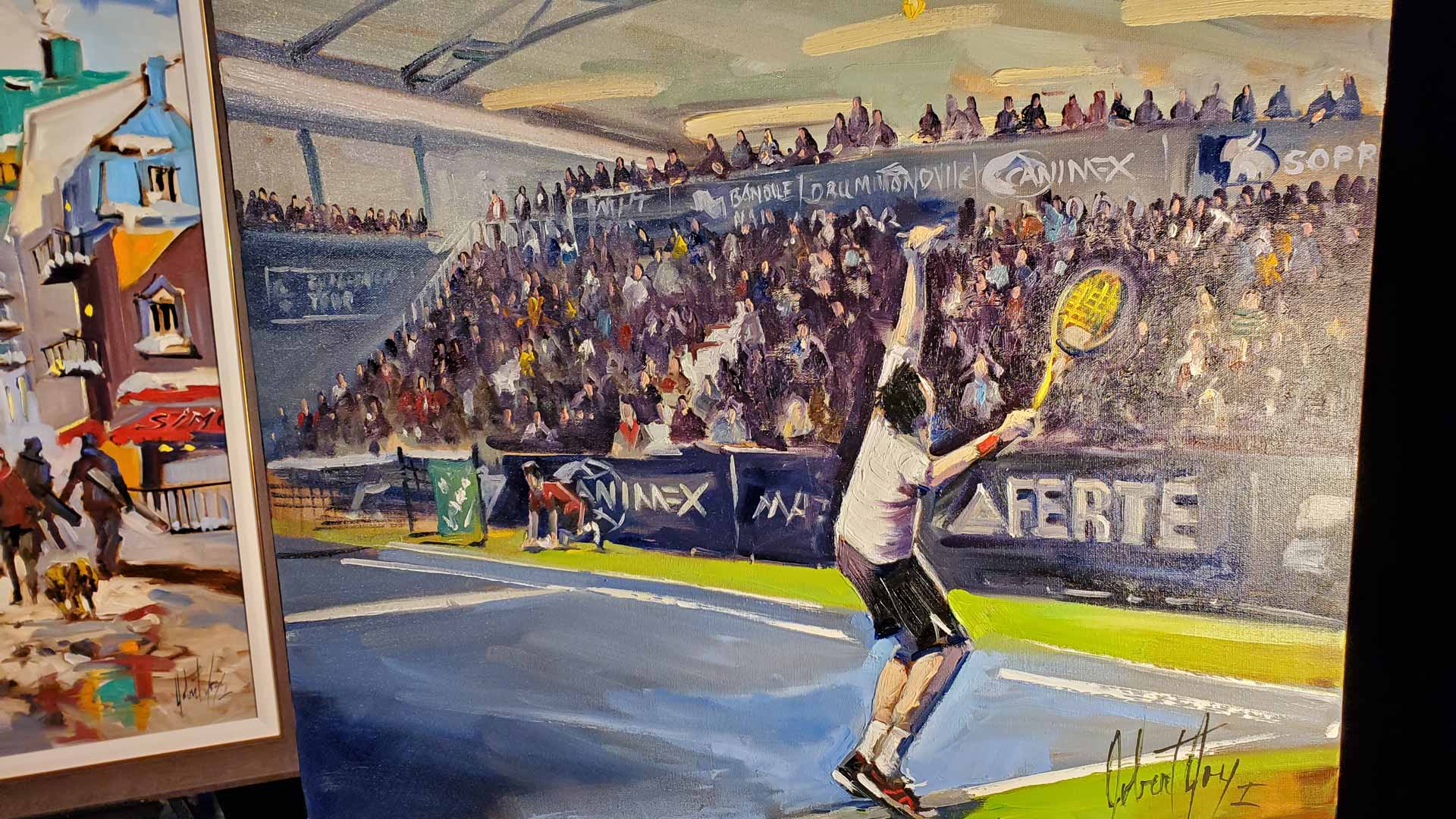 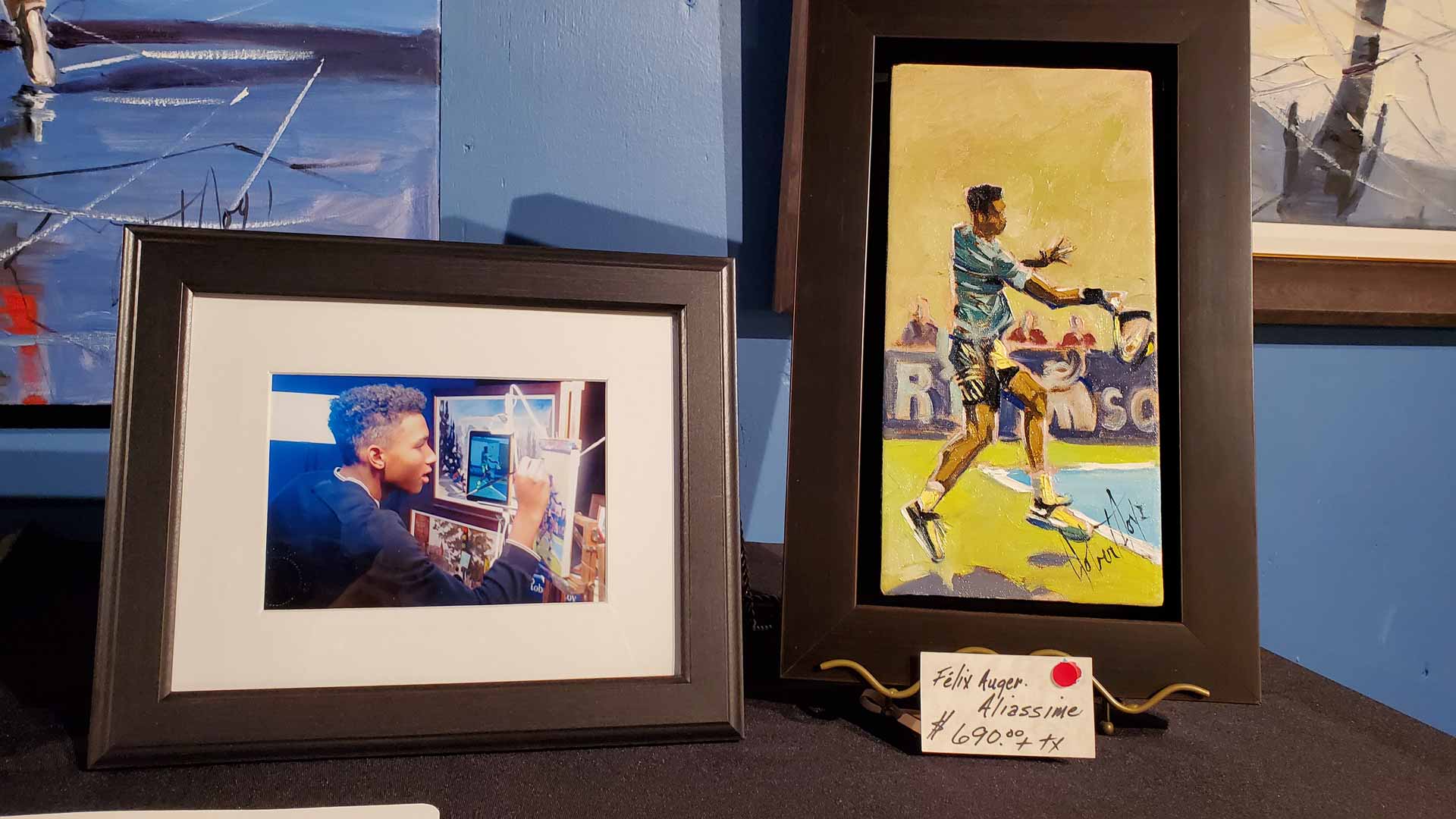 Felix Auger-Aliassime signs his painting while competing in Drummondville in 2017.

This story of player and painter is just one example of how the Drummondville community is so close-knit with the tournament. The town rallies around its biggest event of the year to create world-class entertainment for the public and give the players a home away from home.

In coordination with Tennis Canada, it all started with the vision of the three local Drummondville businessmen - Alain Caille, Stephan Hamel, Pierre Desrosiers - who have organized the tournament since Day One. The trio's passion and unrelenting drive have been a guiding light for the event.

They have established such an integral piece of the community. With 100 total sponsors, there is a waiting list for local businesses to join the tournament. Demand to become a sponsor has grown every year and the organizers often have to turn down applicants.

Twenty-two committees are responsible for all tournament operations, with each carrying out their own specific roles. That is, in addition to their normal day jobs. Desrosiers is a contractor for heating and cooling, while Caille is an accountant and Hamel is a steel contractor.

"Outside of this week, we have to make decisions on the tournament throughout the year," said Desrosiers. "And we have to improve every year. That is not optional. It is the passion that drives us."

On Sunday, Maxime Cressy defeated Arthur Rinderknech for the title. The tournament spared no expense for the grand finale, kicking off proceedings with an extravagant light show and drum display featuring four local entertainers. Smoke machines surrounded the player entrance to the court, as Cressy and Rinderknech became instant rock stars as they walked on Court Central.

The sold-out crowd was on their feet from first ball to championship point, enhancing the already festive atmosphere inside the Tennis Intérieur René Verrier. And it wasn't exclusive to the final. More than 6,000 fans streamed through the doors throughout the week, to watch the stars of the ATP Challenger Tour up close.

Considering there were no Canadians left in the singles draw from Wednesday on, it was impressive to see the public pack the stands every day. But one visit to the tournament and you'll instantly see why that's no surprise. Arguably the most successful events on the Challenger circuit are those that integrate the local community to create a premier fan experience. That is at the core of the Drummondville philosophy.

After all, the tournament's intimate atmosphere is a product of the town itself. A cozy municipality in the heart of Québec province, located one hour east of Montreal, the inhabitants are proud to host one of the most popular sporting events in the region. That is what the tour is all about. Bringing world-class tennis to smaller locales that don't have access to big sporting events year-round.

Some tournaments have the luxury of being held at sprawling arenas, established country clubs and modern tennis centres. In Drummondville, the tournament organizers work tirelessly to transform the modest multi-purpose facility into the social event of the year.

As they say, "It's the place to be. For the sponsors, if you're not part of it, you're missing out."