An exuberant Victor Estrella Burgos celebrates in front of the home fans in Santo Domingo.

It was one of the more emotional scenes that you will witness on a tennis court. To see how beloved Victor Estrella Burgos is in his native Dominican Republic, look no further than what transpired on Tuesday evening in Santo Domingo.

They came in droves for the final act in the career of their legend. For five years, the Santo Domingo Open - the biggest ATP Challenger Tour event in Latin America - has been one big party at Club La Bocha. Last year, the Dominican faithful waited out rain delays until well past 3am and for this edition they packed the club to support their native son.

A standing ovation for Victor Estrella Burgos, as the 🇩🇴 bids farewell in front of the home faithful in Santo Domingo. Thanks for the memories, @Vitiestrella80. pic.twitter.com/GydYWSoKwe

"The truth is that it was a beautiful experience this week," Estrella told ATPChallengerTour.com. "So many people were there and so many sent me messages. Just a lot of nice memories. It was really special, because I knew it was going to be my last matches. I enjoyed it a lot on the first day and then I lost to Monteiro, but it was something I will never forget. So much emotion. And a lot of people crying, but they were all very happy because they were there for me for my entire career."

The Dominican culture is vibrant and the energy from the crowd reflects that, providing a palpable, rhythmic atmosphere. The movements of the locals echo the traditional merengue dance that is a source of pride. 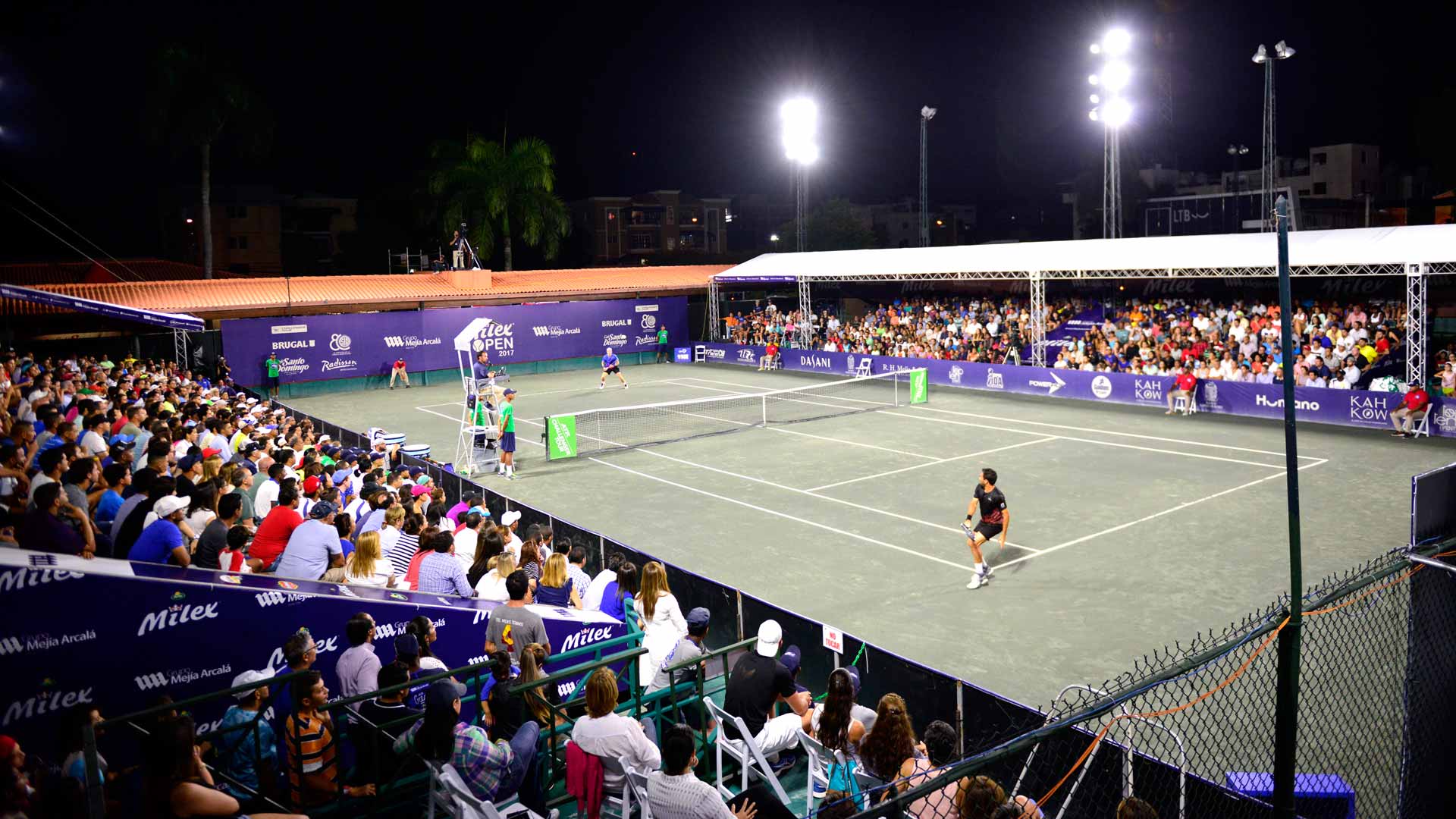 On Monday, they danced, sang and cheered in full throat, as the 2017 champion earned the final match victory of his career. And on Tuesday, they danced some more, screamed even louder and cried as Estrella bade farewell with a defeat to Thiago Monteiro. The tears flowed in the stands and on the court, as the 39-year-old sent a backhand into the net and promptly crouched to the green clay. A deafening roar rained down on Estadio Central, as an emotional Estrella embraced his friends and family and blew kisses to the public. To understand his impact on tennis, sports and culture in the Dominican Republic, this scene paints the perfect picture.

"I was very calm and happy, to be honest. It was a dream to finish my career at home and in front of my people. When I began my career, we didn't have a professional tournament in the Dominican Republic. And now we have a big one in Santo Domingo, where many people could come and see me play and support me. It was really nice to see so many players and so many people I know my whole life. They all traveled to Santo Domingo for my last tournament and that means a lot."

The story of Estrella is one that transcends tennis. His achievements between the lines are plentiful, but it's his impact off the court that sets the Dominican apart and has given him a unique legacy.

The greatest player to hail from the Dominican Republic, and arguably the entire Caribbean region, Estrella has not only been an inspiration in his country. His unyielding passion and exuberance has extended to all corners of the globe, attracting fans wherever he travels with his charisma and inviting personality. 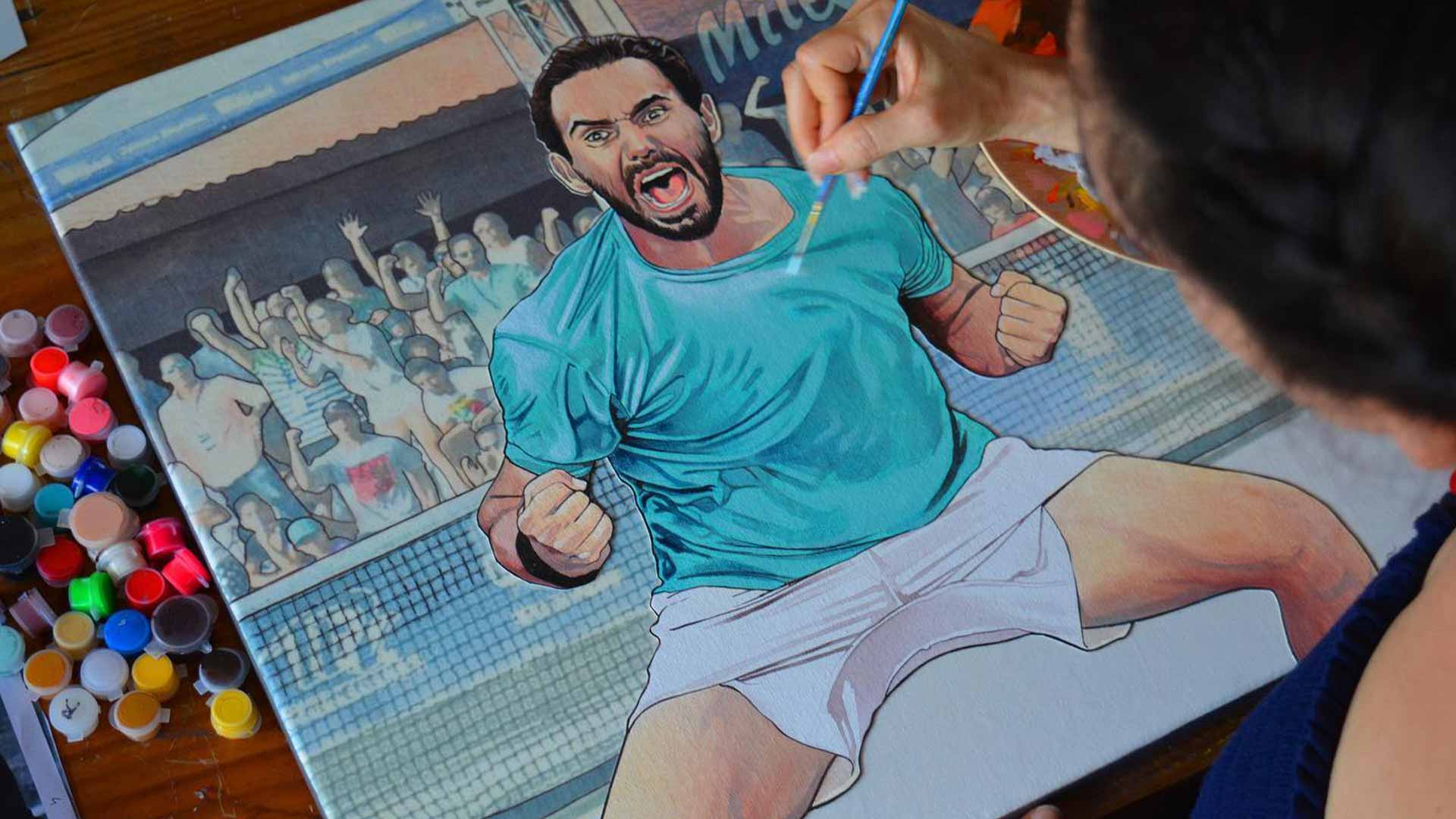 And beyond his attitude and energy, it's his journey that has been so captivating for so many. Standing at just 5'7" and hailing from a small island - one that has baseball at its soul and is unequivocally the core of its culture - the odds were stacked against Estrella. His country never previously had a player feature in the Top 100 of the ATP Rankings, let alone the Top 50, yet that is where he found himself... at the age of 34.

"It is something very special for me to achieve everything that I did with my shorter height, older age and no tennis tradition in my country. I broke down all those barriers and to be among the 50 best players in the world is incredible. To overcome all the adversities makes everything I've achieved more satisfying.

"I also had to overcome financial adversity, not having a coach, coming from a small country... that gives me more pride. All the success that I had on the tour I could accept with humility, understanding all I went through to get there. That was the path I had to travel and without a doubt it fills me with joy."

But he didn't stop there. He also became the second-oldest first-time ATP Tour titlist in the Open Era with his maiden crown in Quito in 2015. In his mid-30s, when most players' careers are winding down, Estrella was just getting started. The King of Quito would claim not one, not two, but three straight titles at the ATP 250 event, pulling off a stunning three-peat. 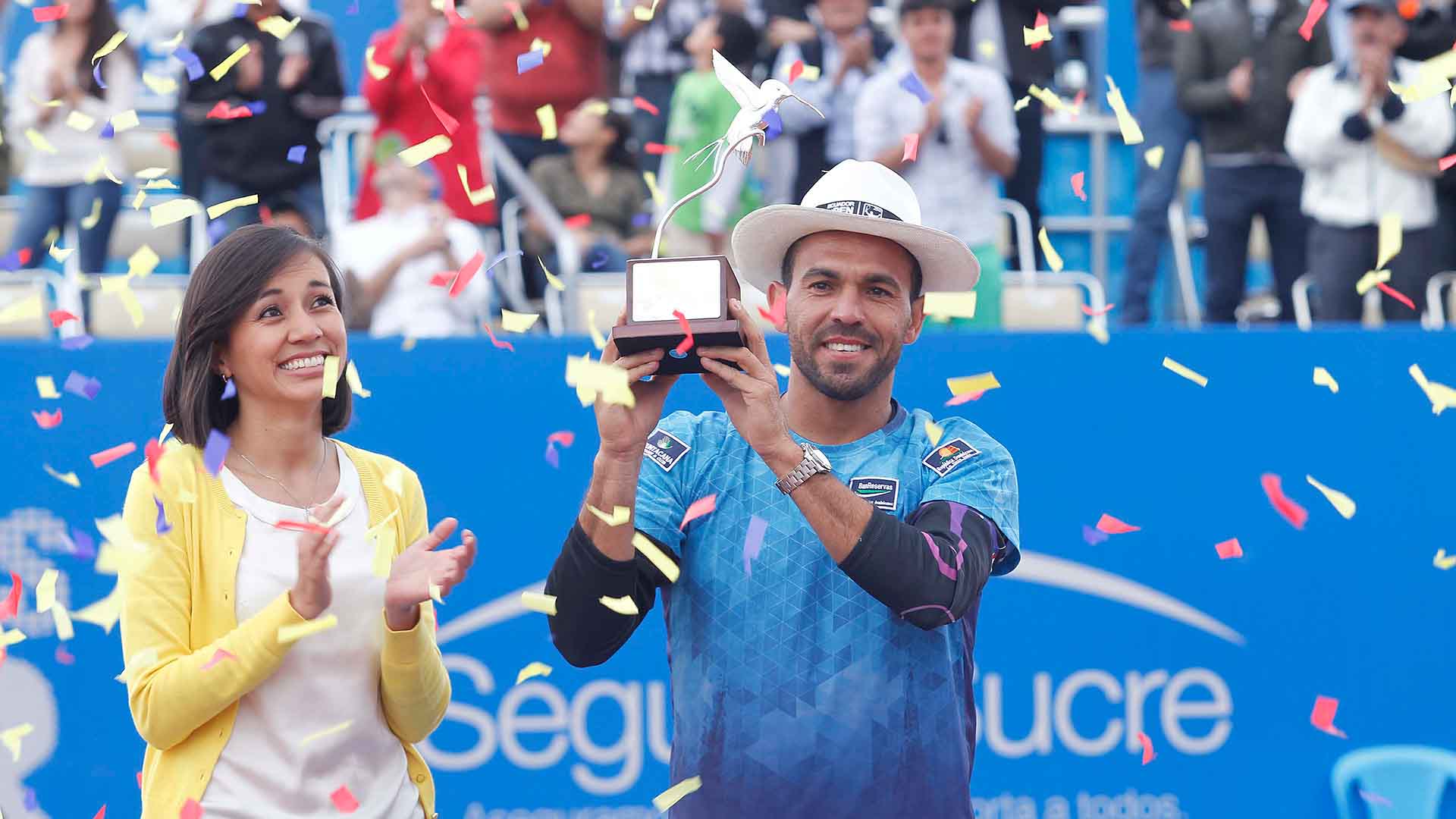 "My first title in Quito was very important for me, as the first ATP tournament I won. And the third was something unforgettable. I beat Ivo Karlovic in the second round when I was match point down against his serve. I managed to win that tournament. Also, in 2017, I won here in Santo Domingo. That was something incredible. I collapsed in joy and winning at home is always special.

"Tennis is growing in the Dominican Republic. We have one of the biggest Challengers now, we also have three Futures in the year, and that is a sign that we are in the right direction. We have junior players who want to play at a professional level and follow in my steps. That is something very positive for tennis here, since previously we had none of that."

This is the same player that turned pro in 2002, but would hang up his racquet soon after, taking a job as a coach in his home country. And, after multiple comeback attempts, it wasn't until 2013 that his professional journey took full flight. Most players' careers don't begin at the age of 33, but Estrella set out to prove that obstacles breed opportunity and can nourish a player's passion.

In 2014, Estrella became the oldest to debut at the US Open, streaking to the third round. He would compete at all four Grand Slams and multiple ATP Masters 1000 events in his career, facing the likes of Rafael Nadal, Stan Wawrinka and David Ferrer.

Estrella played with the same energy and passion that Nadal has been heralded for throughout his career. Like the Spaniard, his dedication to his craft and unrelenting determination has attracted fans throughout the world. Even Nadal has taken notice, making a congratulatory post on Instagram following Estrella's final match.

"It is something innate, something that is in me naturally," Estrella added. "When I enter the court, no matter where I am, I play with great enthusiasm, passion and fight. I run for everything, fight for all the points and behave like a warrior on the court.  People like that. They appreciate it.

"When I arrive in any country, people follow me and like to see me play, see how I defend the points and win them. Feeling the support of people from other countries, not just yours, is something that gives you a lot of energy. I received messages from many people saying I was an idol for them."

What's next for Estrella? The Dominican will take a well-deserved break, but he has no plans of leaving tennis.

"I will rest for now, but I plan to continue working in tennis. I want to shape the Dominican Federation, create an academy in the future and develop players there. I hope to pass on what I know to the younger players." 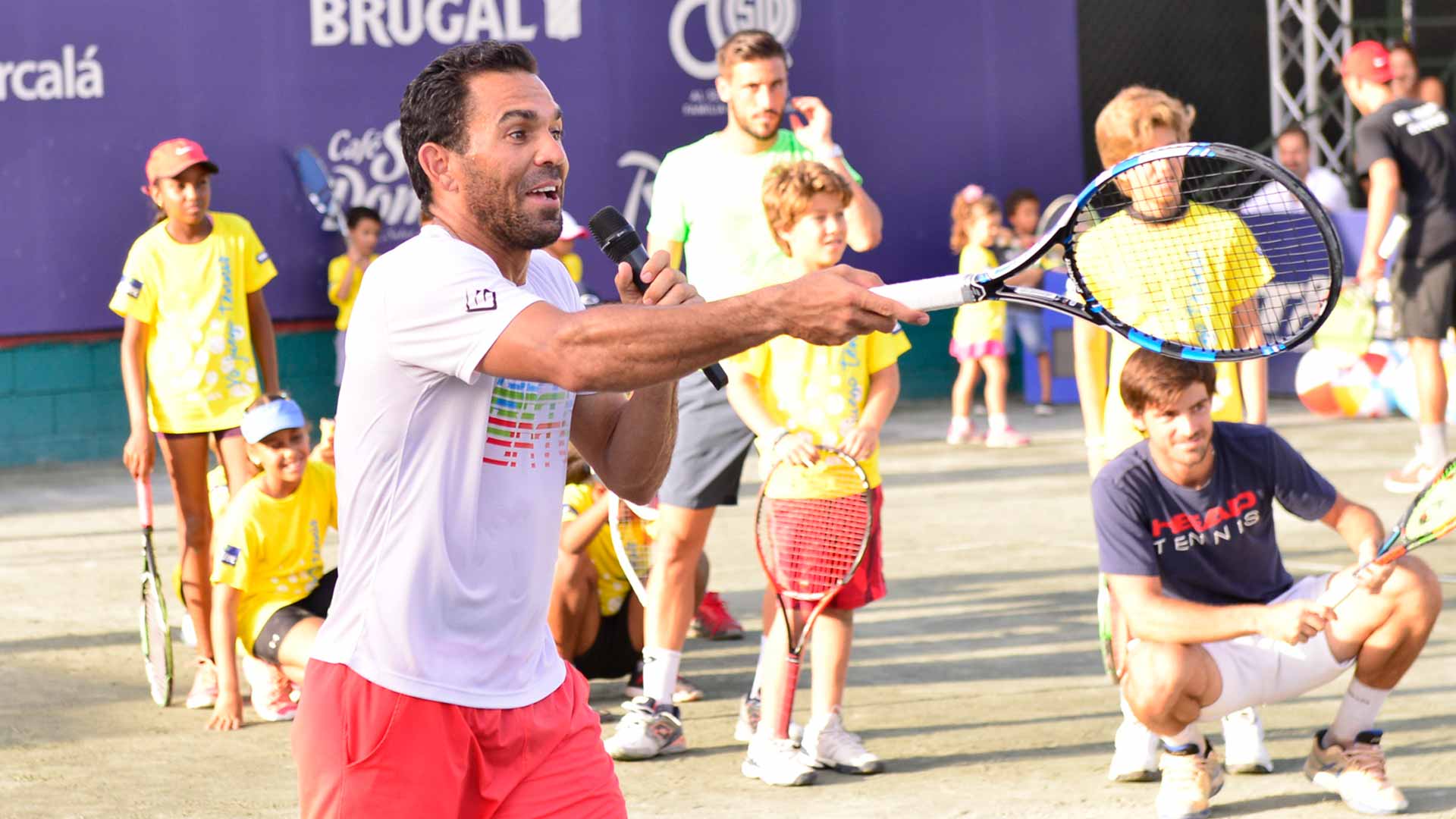