ATP Staff
This article contains:
Swiss was playing in his final tour-level match

With the world watching, the curtain came down on Roger Federer’s historic career on Friday night at the Laver Cup. In front of an electric crowd, the Swiss maestro teamed with longtime rival and friend Rafael Nadal to strike his final shots at The O2 in London.

The former World No. 1 looked sharp around the net and fired his seemingly effortless groundstrokes through the court throughout the two-hour, 16-minute clash. However, he was ultimately unable to earn the 1,382nd win of his career in singles and doubles, falling to Team World pair Jack Sock and Frances Tiafoe.

"We'll get through this somehow, will we? Right?,” Federer said with a cracked voice during his on-court interview. “I’m happy, I’m not sad. It feels great to be here and I enjoyed tying my shoes one more time. Everything was the last time. The match was great, I couldn't be happier. It's been wonderful." 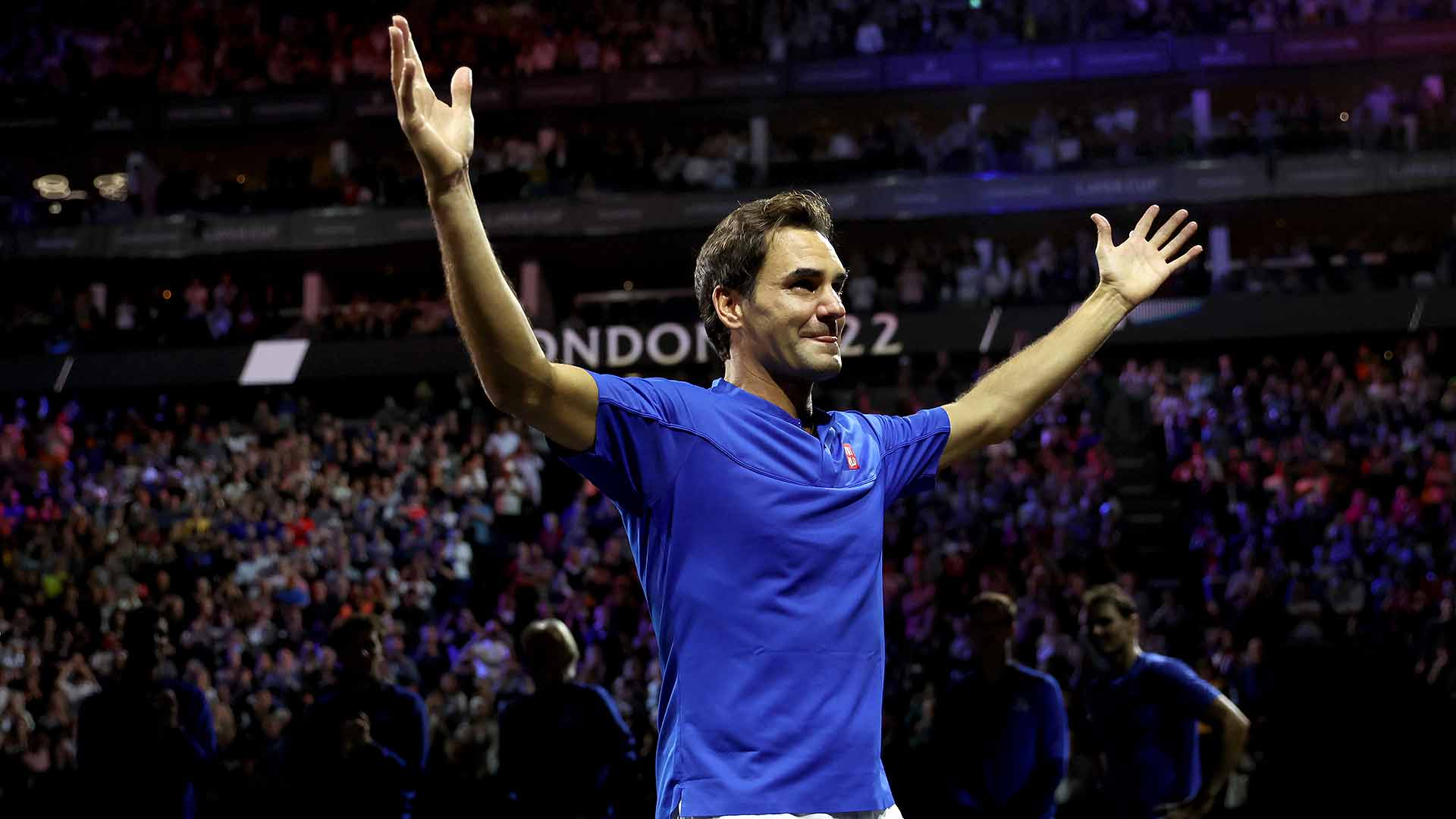 Federer was overcome with emotion in the immediate aftermath of the match, hugging teammate Nadal and waving to the crowd as he embraced the roar from his fans for the final time.

The Swiss star then walked to his chair for the last time, where he stood alongside his teammates and hailed the capacity crowd. Federer was unable to contain his emotion when addressing the arena during his on-court interview, breaking down in tears as he shared final words of thanks and gratitude to his family, team and supporters.

"Playing with Rafa on the same team, and having the guys, everybody here, all the legends – Rocket, Edberg, Stefan — thank you," said Federer, who was joined on court by his his parents, wife Mirka and their four children. "I didn't want it to feel lonely out there. It felt lonely for a second when they told me to go out... but to be saying goodbye on a team, I always felt I was a team player at heart. Singles doesn't really do that but I've had a team that travelled with me around the world. It's been amazing with them, so thanks to everybody who made it work for so many years.

"And then of course being on the team with Andy, Thomas, Novak, Matteo, Cam, Stefanos, Rafa and Casper... and also the other team, you guys are unbelievable. It's been a pleasure playing all these Laver Cups.

"It does feel like a celebration to me. I wanted to feel like this at the end, and it's exactly what I hoped for, so thank you."

You May Also Like: The Grit & Grace Of Roger Federer

The former World No. 1 leaves the sport as a legend. He won 103 tour-level titles and spent 310 weeks at No. 1 in the Pepperstone ATP Rankings. Federer first faced Nadal in 2004 at the ATP Masters 1000 event in Miami. They battled it out a further 39 times over the years, competing against each other in 24 finals.

Having built a special relationship, it was fitting for Federer to end his career alongside the Spaniard, with ‘Big Four’ stars Novak Djokovic and Andy Murray cheering them on from the sidelines. His parents, wife Mirka and children were also watching courtside.

"We have to go there?" he joked when asked about his family. "I've done OK so far. I'm at least able to talk. In my vision, I was never able to talk so I'm doing way better.

"My wife's been so supportive. She could have stopped me a long, long time ago, but she didn't. She kept me going and allowed me to play. It's amazing. Thank you."

In an entertaining match, Federer and Nadal were in high spirits throughout, smiling and entertaining the crowd with their dynamic shotmaking. During the third game of the first set, the Swiss star fired a forehand through a gap in the net. Despite Team World being awarded the point, the Swiss-Spanish tandem shared a smile as they walked back to the baseline.

With the crowd roaring them on, Federer and Nadal played with freedom, matching the Americans' intensity in a series of all-court exchanges to win the first set. After Sock and Tiafoe won the second set, a Match Tie-break was left to decide Federer’s final clash. With the crowd on their feet, it was the Americans who found a way, saving one match point at 8/9 to edge a thrilling tie-break.