Ferrero: The Art Of Building Alcaraz

Alvaro Rama
This article contains:
The former World No. 1 takes an in-depth look at the #NextGenATP Spaniard

Juan Carlos Ferrero is in no rush with Carlos Alcaraz. In the run up to the Intesa Sanpaolo Next Gen ATP Finals, the innovative tournament in Milan that brings together the Tour's best 21-and-under players, everything seems to be going in slow motion. The Spaniard is flying through the ranks of professional tennis with a career built on the foundations of the calm instilled in him by his coach, who is determined to build a rock-solid player.

At the players’ hotel, just 500 meters from the Allianz Cloud stadium that is hosting the competition, the former World No. 1 spoke to ATPTour.com about one of the most exciting prospects on Tour.

Do you view Milan as the reward for a great season?
Of course. He has his sights set very high and he also had an eye on the other tournament [the Nitto ATP Finals], because he was No. 20 in the [FedEx ATP] Race [To Turin]. Without a doubt, he was very excited to come here and it was one of the goals at the start of the season. We haven't spoken much about it because you pay more attention to the normal ranking. Since he qualified, he has been looking forward to playing the tournament even though there are no points available. Because of the characteristics of the tournament: the singles court, the eight best players.

Also, the standard here is very high, there are players that are in the Top 30 like him and [Sebastian] Korda, [Holger Vitus Nodskov] Rune, who just won several Challenger events, is here, [Sebastian] Baez, who has also won quite a few tournaments, [Hugo] Gaston is also closing in on the Top 60... The standard is very high here and it's not a minor tournament by any means. It really is a source of motivation. 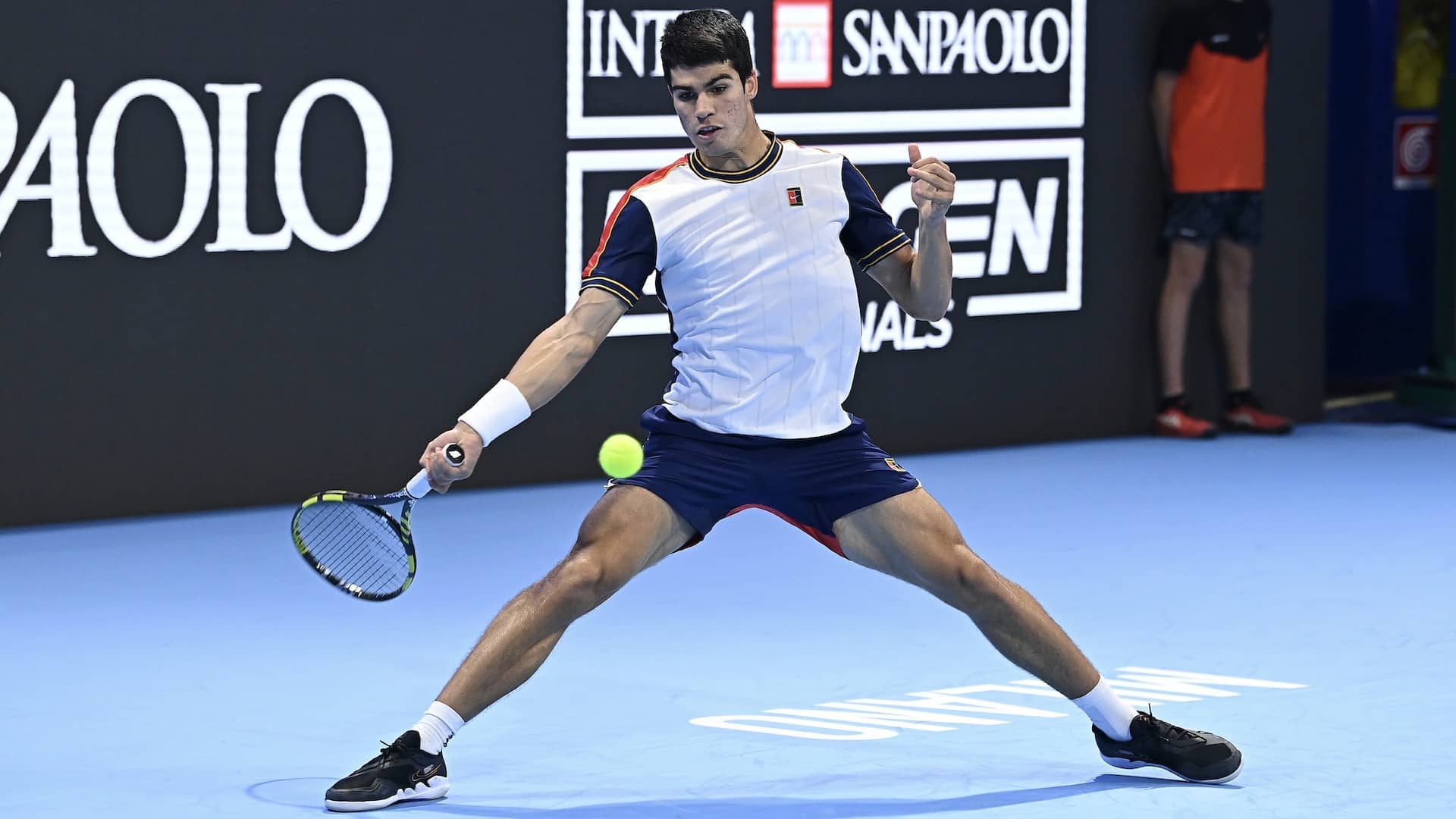 Carlos is the highest ranked player, as well as being the youngest, what have you made of his rise?
Carlos' rise has been very fast this year. I already thought he was precocious at 15 or 16 years old. At that age he beat Albert Ramos-Vinolas in Rio de Janeiro. I told myself that when he turned 18 he could be around the Top 50.

I think it's very positive. Of course, we've never been in a hurry. We've always tried to make him grow and invested a lot in his tennis and paid very little attention to his ranking – always focused on improving his game and as a player, and gaining more experience with how young he is. The ranking came because of the results. We really value it because it's very difficult to do. Even more so with the situation created by COVID-19, which has meant it was even harder to climb up the rankings.

A few days ago Carlos said: “I've exceeded my expectations this year.” Has he exceeded yours?
Ferrero: Yes, one of the expectations we had was to be ranked around No. 50. In terms of that number, he has exceeded expectations. We could also mention that he has played against top players and been able to compete on their level – and even beat them, as was the case with [Stefanos] Tsitsipas and [Matteo] Berrettini, even [Jannik] Sinner, who is another of the most promising young players. It's true that he has exceeded those expectations and shown that his game peaks at a very high level that we have to try and maintain so that he can play like that continuously.

Carlos will continue to climb. Right now, he’s a bit like Son Goku [from Dragonball Z], when he started to transform and then lost power. It's a little joke I have with him. But it's true that those peaks at such a high level are because he's a very dynamic player who can do a lot of things on court and on any surface.

Many of his peers call him 'mature' for his age. What is maturity?
Ferrero: Recognising what is happening on court, knowing when you are doing things well or badly. Often players obsess over something, and don't realise what they're doing wrong. Carlos started to realise increasingly quickly what he was doing wrong, and what he actually has to focus on, above all on a mental level.

Since he was little, he has been an inconsistent player: he would play very well, then he would play very badly. It still happens to him on occasions, but he's much more stable now. He has placed a lot of importance on working hard on the mental side. It's something that I've always mentioned to him over these three years, that it was very important to progress little by little. He has also upped his work with his psychologist Isabel Balaguer. He knows perfectly well that it is one of the most important things, because in terms of fitness and his tennis, his progress is very fast at the moment.

I think the most important thing at the moment is to continue growing as a player on a mental level in order to keep getting stronger for situations like those he has been through or the many more he may experience.

You May Also Like: Rookie On Tour: Alcaraz Relives Milestone Moments

What are you most proud of when you think about Carlos?
He's very loyal to the people he loves. The people that work with him really recognise that, because of how he is now and not because of who he is becoming. I really value what a great kid he is. From the start I think we connected very well. I really value that it's a simple relationship and that the daily work between us is easy. Ultimately, so much travel and so much time together requires peaceful relationships. I really value that loyalty and that trust.

Then we get to the question of whether or not he is a hard worker, if he is dedicated or not. I'm a very strict person when it comes to work and he has gradually had to incorporate things that he didn't have and that I told him were very important. At first, he found it tough but then he understood that in the end it's a way of life. He gradually learned these things and there is merit in that because that wasn't the case at the beginning.

What's the one thing you've tried to instill in him the most?
Humility and consistent hard work. I think it's very important. Then there have been other details. He was a person who, when he was tired, really dropped his level of training and I've always been consistent in telling him that you have to work during those times. The importance of intensity on court… There are many small things, but I have highlighted humility and being a hard worker on court. That's something that he absolutely had to have.

Even well-established players have recognised his progress, how has that influenced Alcaraz?
He absorbs it very well, without added pressure. Since everyone has started saying that he is the new player who could go right to the top, he has tried to stay in a small bubble. Above all, to try and stay on his own path. Carrying the burden of comparisons with a player like Rafa [Nadal] is difficult for such a young boy.

He is very mentally strong but he still has a lot to learn – we saw it last week [he was in tears against Hugo Gaston in the last 16 of the Rolex Paris Masters]. There are things that he is unable to control. The fact that they compare him with Rafa is difficult but we have always handled it well. Him best of all. He wants to do things his own way and so far, he really is coping very well. We haven't noticed more or less pressure because of this. 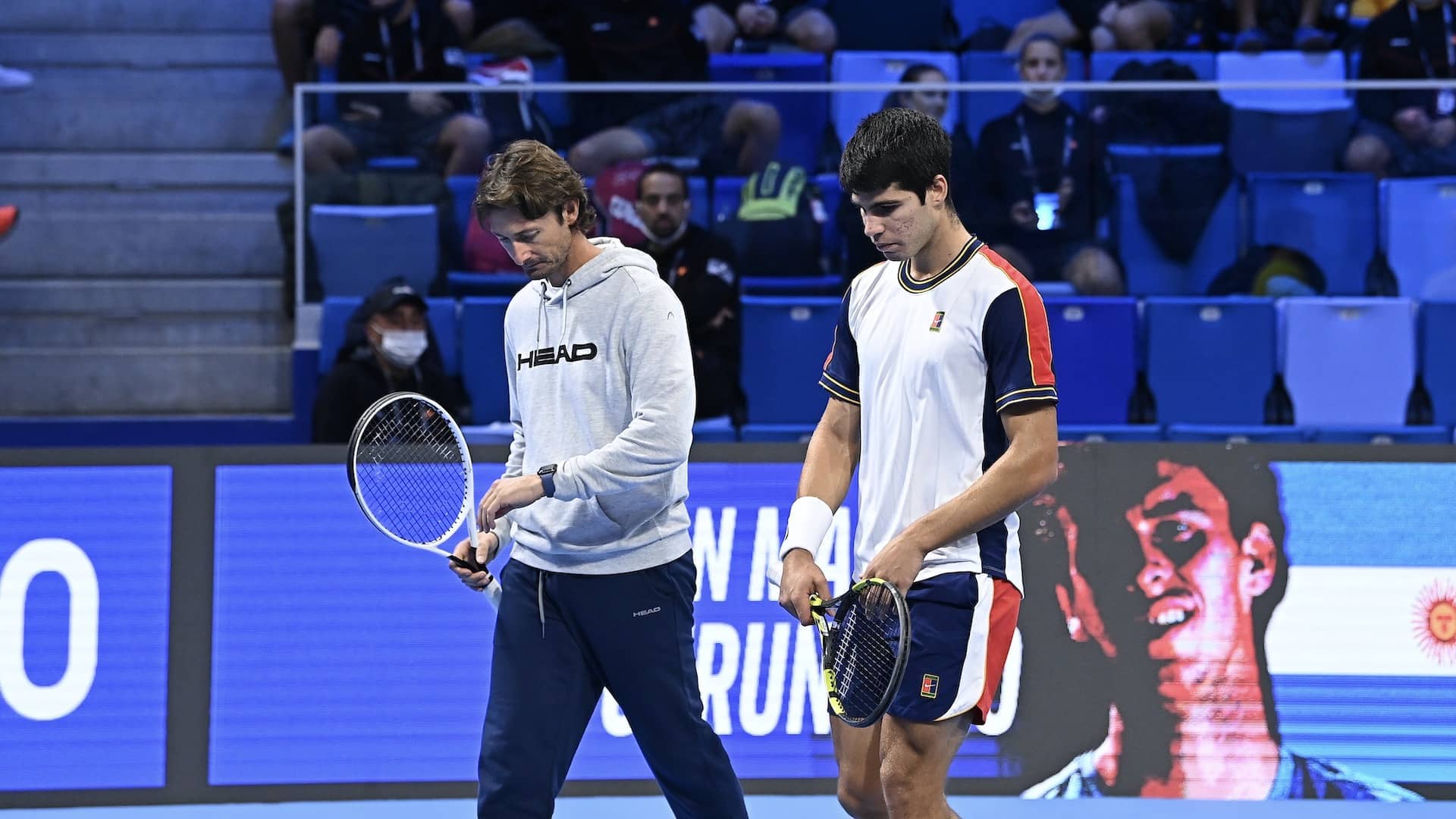 Does it take someone special to maintain that?
I'd say you have to be very clear about it. We talk about it, not much, but sometimes we've talked about it. And we're very sure of the road he wants to follow. So they compare him with Rafa? Great, that means that people think he has a lot of potential. But he has to be very clear, and other people do too, that he has to stay on his own path. I won't say that Rafa's career is unrepeatable, but almost. Carlos has to have his own career and keep looking forward.

You've been World No. 1 in the past. Do you remember yourself at his age?
I think we're similar in that we are both very emotive on court. That's positive, because it means you don't lose your identity or your style of play. If you're truly good, you're able to keep your head in difficult moments, tough matches, moments of tension. A player with character will always push forwards. A player who shrinks from those situations will find it difficult to win big tournaments. In that respect, he is very good.

Making comparisons is difficult. Something else about Carlos is he always wants to improve. That's very important. I've spoken to him a lot about wanting to be better every day. You can't train for the sake of it, that's a waste of time. You have to do quality training, to know what to train, you have to know what needs improving, where your weaknesses are, which moments you need to improve in, and in which moments you need to read the game. He has been improving in all of those aspects.

At some tournaments we've joked around, 'Now you have to tell me what you're doing wrong in this match.' To explain to me exactly what he should have done differently, doing role plays like that. It might not seem like it, but it really helps him a lot.

Is he good at those analyses?
Yes. We tend to talk about what has happened. More than about statistics, or what he should have done. I talk more about mental moments on court than tennis tactics. He is quite open to that and it's wanting to improve constantly that's the most important thing.

If we were to speak in one year's time, what would Juan Carlos Ferrero be happy with?
If Carlos has managed to continue growing naturally and in the way I have in mind, I have a very clear idea of what next year could be. As he progresses, he will turn 19, he'll be more mature, have more experience on court, and play a lot of quality matches against very good players. If everything continues as I think it may, I think next year will be… interesting.