Andre Agassi reached the final in his hometown Las Vegas Challenger in 1997, eventually propelling the American legend back to the top of the ATP Rankings.

Josh Meiseles
This article contains:
On the heels of a successful fourth edition, the Las Vegas Tennis Open is thriving on the ATP Challenger Tour

It was November 1997. As neon winks danced between hotels and casinos, illuminating the night's sky, Las Vegas was fast becoming a beacon of opportunity and hope in the desert. It was thus apropos that the ATP Challenger Tour set its roots in the burgeoning city. During the day, the city was drenched in scorching sunlight. Even in late autumn, the Frank and Vicki Fertitta Tennis Complex was set ablaze, but the players took it in stride as they battled for the trophy at a $50,000 event.

For Andre Agassi, this is the place he calls home. Twenty-one years after competing in his hometown, Agassi is taking a hands-on approach in the Las Vegas Tennis Classic's revival. With the goal of growing the game in the city, he is supporting the development of tennis at the Challenger level there.

The Las Vegas native is an American legend and one of the best players to ever lift a racquet. But as he stepped on the campus of the University of Nevada-Las Vegas in 1997, sitting outside the Top 100 of the ATP Rankings, he was a humbled man.

Following a stretch of wrist issues and personal troubles, he became just like any other player on the Challenger circuit. The goal was the same as the next guy, fighting for his career.

"Despite what you would read about me and my tennis, my fall from the top was in comparison to Bruce Springsteen playing at the local bar down the street," Agassi told ATPWorldTour.com. "People talk about me being humbled out there. Well for sure. I was fighting out there and I was very far from where I had been. I was as disconnected as I had ever been on a tennis court. But what a beautiful place to start the climb back than in your own backyard. I have really proud memories from playing out here." 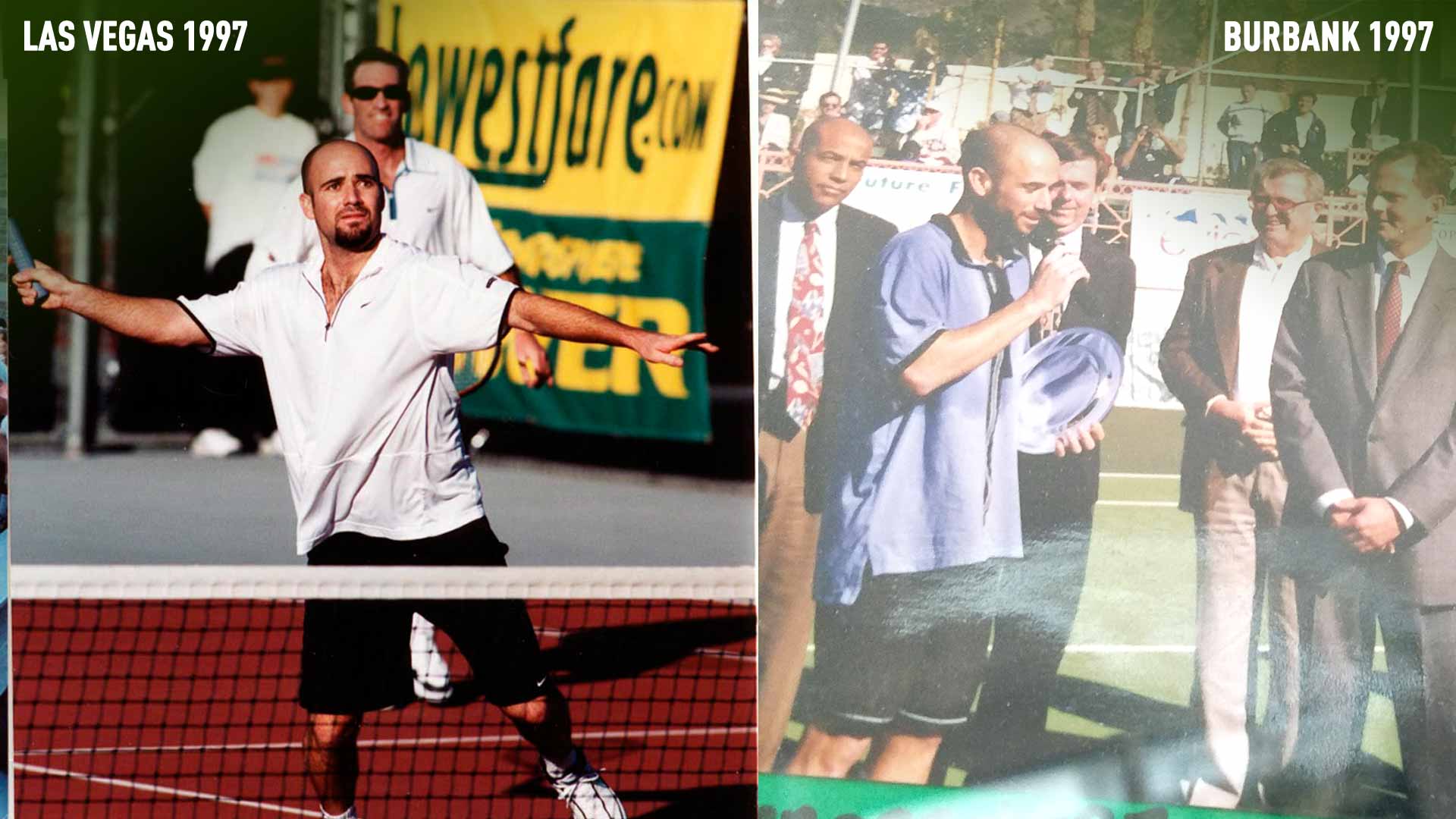 Already a three-time Grand Slam champion and World No. 1, Agassi was made to work to resurrect his ATP Ranking. After falling as low as No. 141, he made his comeback debut on his home courts of Las Vegas. On the ATP Challenger Tour, fans are given the unique opportunity to catch a rising star in an intimate setting. It is rare to see an established superstar of Agassi's caliber working his way back from injury at the level. But that's exactly what the Vegas faithful were treated to.

Fans crammed into every square foot of the recently opened tennis centre to catch a glimpse of Agassi, as the American battled his way to the final. Where many players would seek wild cards into ATP World Tour events to rebuild their standing, Agassi said he needed to experience the grind of working from the bottom up. Armed with a rigourous conditioning programme with longtime trainer Gil Reyes, he not only reached the final in Las Vegas, before falling to Christian Vinck, but would go on to lift the trophy a week later in Burbank, California.

"The important part was having those thresholds of quantitative improvement. I grinded my way to the final at UNLV and I was never more excited to win a tournament than in Burbank. That was reflected in my performance. To earn my way through a few tough matches, I got to the final and remembered not what you don't need to do, but what you do need to do out there. You're not playing to not lose. You're playing to win. There was a learning curve there that gave me a lot of wind in my sail heading into 1998, where I managed to make it all the way back to No. 6 in the world."

It was that 9-1 stretch that not only restored his confidence, but gave him a feeling of purpose on the court that he desperately sought to rediscover. He would defeat a 25-year-old Daniel Nestor in the Burbank semis, followed by a 6-2, 6-1 rout of World No. 68 Sargis Sargsian for the title.

Agassi firmly believes that his impressive run at the Challenger level was the impetus that propelled him back to the top. Getting consistent match play over the two-week stretch, and the resulting momentum and confidence, was essential.

His success on the circuit kick-started his climb up the ATP Rankings. One year later, he would return to the pinnacle, securing his lone year-end No. 1 finish in 1999, as well as five more Grand Slam titles.

"The Challenger Tour is crucial," Agassi added. "It's unimaginable that a large number of players would be able to make it without the tour. It provides the ability to build your tenacity and competitive drive and put it to the test at this level. It's a clear stepping stone for the next stage. It played a big role in my life multiple times. When I started my career and then when I fell from No. 1 to No. 141 in the world, I went straight back to the university courts I grew up on and started over again.

"Had the tour not been there, even with all the experience I had, I don't know if I could have built the stamina to hone my craft. It is critical to build your game step by step. It's an important level for every player at some stage in their development. Everybody that makes it uses this as a crucial stepping stone in the process."

Aside from Agassi's influence, the city has a strong relationship with the sport, having also hosted a pair of tour-level events. The Alan King Tennis Classic was held at Caesar's Palace in the 1970s-80s, featuring the likes of Rod Laver, Jimmy Connors, Bjorn Borg and Ivan Lendl as its champions. And the Tennis Channel Open enjoyed a three-year run from 2006-08, with another former World No. 1 - Lleyton Hewitt - among its titlists.

"Pro tennis in Las Vegas was a huge part of my inspiration. It was a powerful part of my life when the Alan King Tennis Classic used to be here. The top players in the world were in the city and it was a pretty special time to have that tournament. But having this platform to impact the city is big. This city deserves pro tennis in some capacity. It's a combination that needs to exist.

"Back in the day, I was the only player from here through the years. I have a lot of close friends that I grew up with here. David Pate comes to mind. He paved the way to believe that dreams are possible. It's big for the community as well." 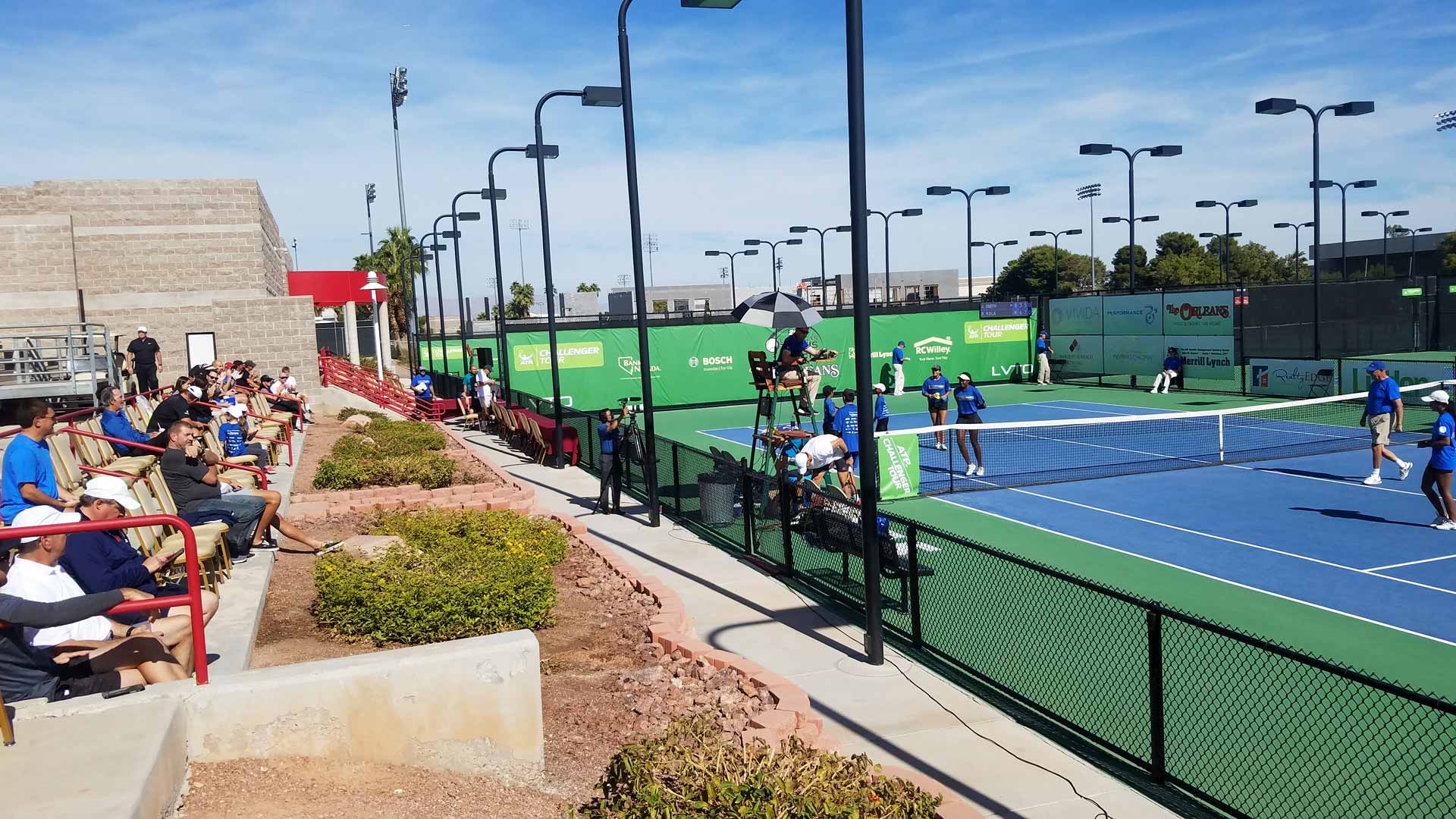 Now, under the guidance of tournament director Jean-Francois Blais and UNLV head coach Owen Hambrook, the revival of the ATP Challenger Tour event is attracting new tennis fans in the city. Agassi himself is also playing an integral part, with the Andre Agassi Foundation serving as a key partner.

The foundation is dedicated to transforming U.S. public education for underserved youth. It is a cause close to Agassi's heart. According to the 48-year-old, nothing has a greater impact on children’s lives than the education they receive. He has taken on the responsibility of helping them fulfill their potential and achieve their dreams.

"I'm blessed to be able to make a difference in children's lives. That has generational implications. It's rewarding and humbling and really a privilege. Figuring out ways to scale my mission here in Vegas across the country, has been a real challenge but certainly a fabulous journey. I continue to pursue ways to impact children's lives through education, and especially those who are underserved.

"And to integrate it with tennis has given me a second career. It's my life's work. The sport has given me such a great platform in my life. It's doing it in a way that's very personal and rewarding. When I can engage with the kids and provide some direction for them, then I do take that opportunity.

"There's a lot to be said for a city of can-do spirits. We're built in the middle of a desert and whatever keeps that dream alive is important."