At Madison Square Garden, 'Ivan Was The Truth'

Dave Seminara
This article contains:
ATPTour.com is this week celebrating the 50th anniversary of the Nitto ATP Finals with a special content series, beginning today with a look at the stunning run of five-time champion Ivan Lendl at the Masters at Madison Square Garden.

Ivan Lendl was a creature of habit. Harken back to the 1980s, when the shorts were impossibly short and tight and the racquet technology was flat earth, and conjure an image of Lendl in his argyle-patterned shirts plucking his eyelashes and sprinkling sawdust on his racquet grip before tossing the ball three miles high in the air for a first serve. The Lendl habit you may not recall was him making it to the final of the Masters a record nine times in a row, which is one of his most impressive feats in a storied career.

Back in the glorious ‘80s, big hair, Walkmans and Rubik’s Cubes were in and Lendl owned the Masters in New York City. He won five of those nine consecutive finals and each year he faced one of the sport’s best in the final: Borg. Gerulaitis. McEnroe (three times). Becker (three times.) Wilander. He played in the event 12 times, compiling a remarkable 39-10 record against the game’s best players.

Lendl was dynamite under the lights—during one stretch in the early ‘80s he won 66 consecutive indoor matches, suffocating opponents with a power baseline game that was ahead of its time. In 1986, when the tournament was held twice, in January and again in December, he won the title both times without losing a set, beating Becker on both occasions. Lendl’s worst Masters results were reaching the semi-finals in 1989, 1990, and 1991, losing to all-time greats Stefan Edberg (twice) and Pete Sampras.

Lendl was particularly fierce at New York’s historic Madison Square Garden, going 33-7 there from 1981-1989. In a recent interview with British tennis great Tim Henman for ATPTour.com, Lendl said that his home base in nearby Greenwich, Connecticut gave him an edge. “I liked my own bed,” he explained. “I liked my own cooking. I just didn’t like staying in New York City; it’s just too noisy for me.” 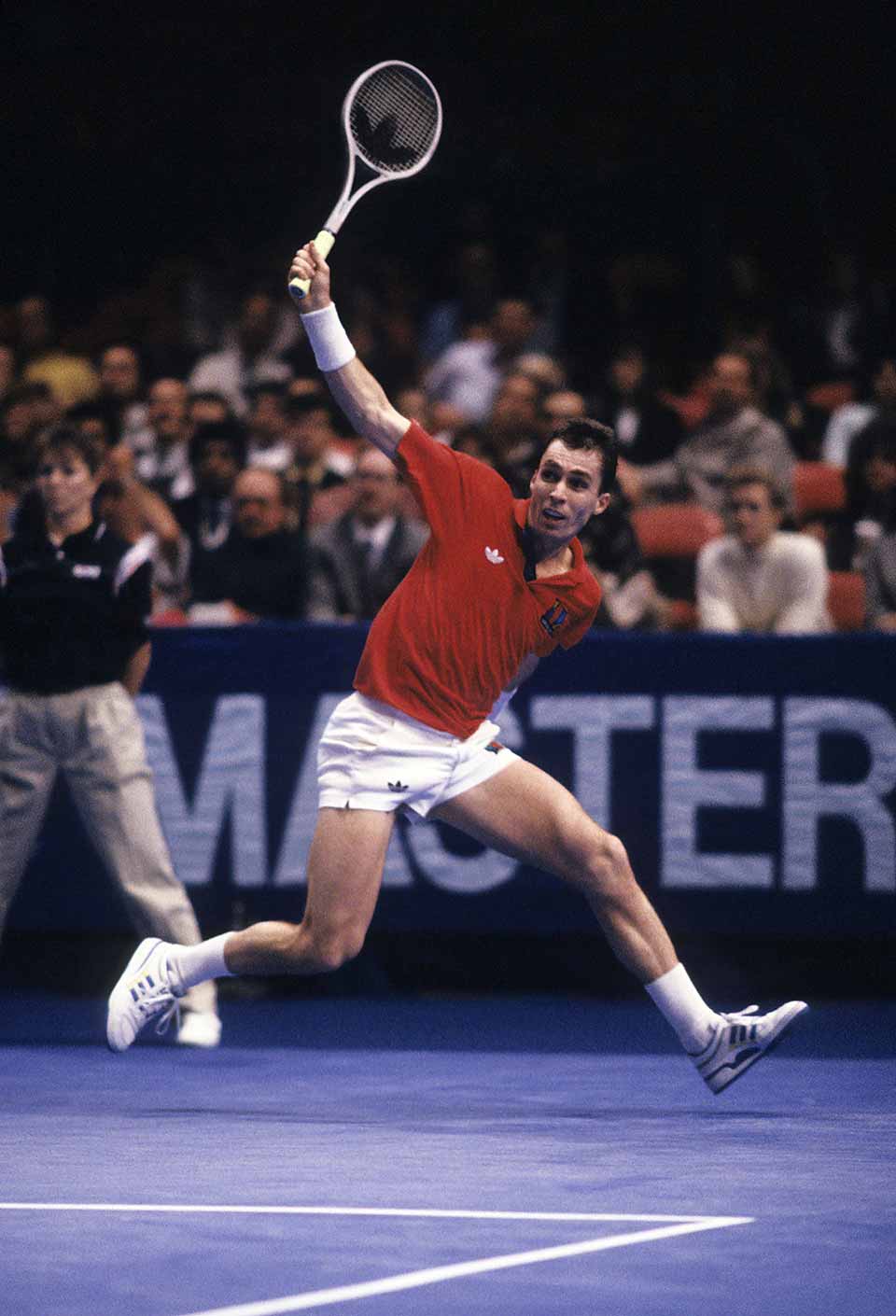 Lendl may have enjoyed the familiar surroundings but, ever a man of routine, he told Henman that he wasn’t happy when the tournament switched from a round-robin format to single elimination from 1983 until (January) 1986, while enlarging the player field from eight players, alternating from 12 to 16 men, before going back to the traditional eight-man, round-robin format in December 1986.

“I didn’t like this (change of format) at all,” said Lendl, still seemingly a little miffed by it. “I felt it was more special with only the top eight players in the world.”

When the format went from 12 players back to 16 in January 1986, Lendl took his irritation out on his hapless countryman, Tomas Smid, one of his good friends, beating him 6-1, 6-0 in the first round.

“I was so ticked off by the format that I played extra hard,” he said.

Lendl faced an uphill battle in terms of fan support, particularly early in his career, especially in the U.S. as the Cold War was still raging and he was perceived by some as a no-nonsense character from an Eastern Block country who was challenging popular stars like Borg, Connors, McEnroe, and later Becker and Edberg. As tennis writer Joel Drucker once wrote, “Borg was the Beatles, McEnroe was the Stones, and Lendl was Led Zeppelin, the guy who crushed the magic of the ‘70s golden age with raw, ugly power.”

In his first five Masters finals in New York, he faced uber-popular Borg in ‘81 and then local guys from Queens (a borough of New York City) four years in a row—Gerulaitis in ’82, and McEnroe in ’83, ’84, and ’85. Asked by Henman what it was like to face hometown favorites in New York, Lendl coolly batted away the question like one of his trademark buggy-whip forehands down the line, betraying no hard feelings.

“It was always loud, no matter who you played,” he said. “But yeah, playing John (McEnroe) over there, it was interesting as well.”

Lendl’s success at the Masters in the early ‘80s—he won back-to-back titles in ’82 and ’83—came before he broke through to win any of the eight majors he’d eventually claim. He told Henman that a turning point in his career came while on a flight in 1984.

“I had been number two or three or four in the world for about four years,” he said. “But I wasn’t happy with where I was. I hired a new coach, Tony Roche, I got some opinions from other guys on the tour, and I got a track and field coach to help me. I also watched a movie, Rocky (IV) on Delta Airlines, and they had a Versa climber, which I already had at home. Ivan Drago (the Russian villain who fought Rocky) was training on it all the time, and I said to myself, ‘I’ll be damned if I lose another match in my life because the other guy is fitter than me.’ And that was the turnaround.”

And there’s the beauty of Ivan Lendl—he’s the same guy whose idea of a good passing shot was a 100 mph forehand to his opponent’s head— he doesn’t care what you think about him finding inspiration in a Cold war villain. Leaving Rocky aside, Lendl’s total commitment to fitness and nutrition that he embarked on in ’84 revolutionised the game. The Czech master ushered in a new era of tennis where only the fittest could rise to the top. Perhaps modern-day players can thank or blame him for the fact that they can no longer eat pizzas and drink beer with impunity while skipping the gym after practice, as some may have gotten away with B.L. (Before Lendl).

Always respected, often feared by opposing players but not always necessarily embraced by his rivals and fans, Lendl’s stock has risen since he retired. Many who rooted against him because he was dominating one of their favorites back in the day now realize how underappreciated he was. Tennis writer Steve Tignor calls it “the resurrection of Lendl” and says that he “became a Lendl fan 20 years late.” And the Lendl bandwagon hasn’t been confined to the tennis world; even Snoop Dogg is apparently a fan. “He was sharp…an old schooler”, the rapper said of Lendl in 2004. “Ivan was the truth.”

Nowhere was that “truth” more apparent than at the Masters, particularly in New York. Lendl, who turned 60 in March, still remembers how he saved match point against Gerulaitis down two sets to love and came back to win in ’82. And how about beating Jimmy Connors four times at the tournament during his 17 consecutive wins against the American southpaw?

Being the perfectionist that he is, some of Lendl’s losses in New York still give him nightmares. In 1988, he made it to the Masters final against Boris Becker just eight weeks after having a secret shoulder surgery. “He beat me 7-5 in the fifth set tie-breaker,” Lendl recalled. “We had a 37-shot rally that he won (on match point) with a let cord winner down the line.”

Henman asked him what loss in his career he might like to replay, but Lendl wouldn’t go there.

“It pisses me off till today that I lost some of the matches I lost. I could give so many examples. But no, you can’t. You do the best you can. It doesn’t make sense to beat yourself up over losses.”