Alex Molcan beats Cem Ilkel on Monday at the US Open in his first major main draw match.

Slovakian Alex Molcan remembers the moments before this year’s Belgrade Open final vividly. The 23-year-old, then a qualifier who was No. 255 in the FedEx ATP Rankings, was steadily hitting groundstrokes across the net during the warmup when the stadium emcee began to introduce the players.

Molcan lost that championship match against Djokovic in straight sets, but it was an important moment in his career. He proved to himself that he was capable of playing with the very best in the sport. It also showed how far the Slovakian had come.

The Presov-native, who is into the second round of the US Open on his major main draw debut, began playing tennis when he was five. Molcan’s parents took him for lessons, and he also played football and a bit of ice hockey (the 5 a.m. wakeups kept him from continuing with hockey).

At age 10, Molcan’s parents divorced. Two years later, things changed even more. The lefty moved 400 kilometres west to Bratislava, a city on the Austrian border, with his mother Andrea.

“We had to move because it’s not possible to play in other [Slovakian] cities I would say. Only in Bratislava can you become a good player, you have to move there,” Molcan said. “My mother sacrificed a lot. The family was basically broke because of tennis, but now it’s all good because I’m an adult. She changed her life because of me and that’s what I’m most thankful for.” 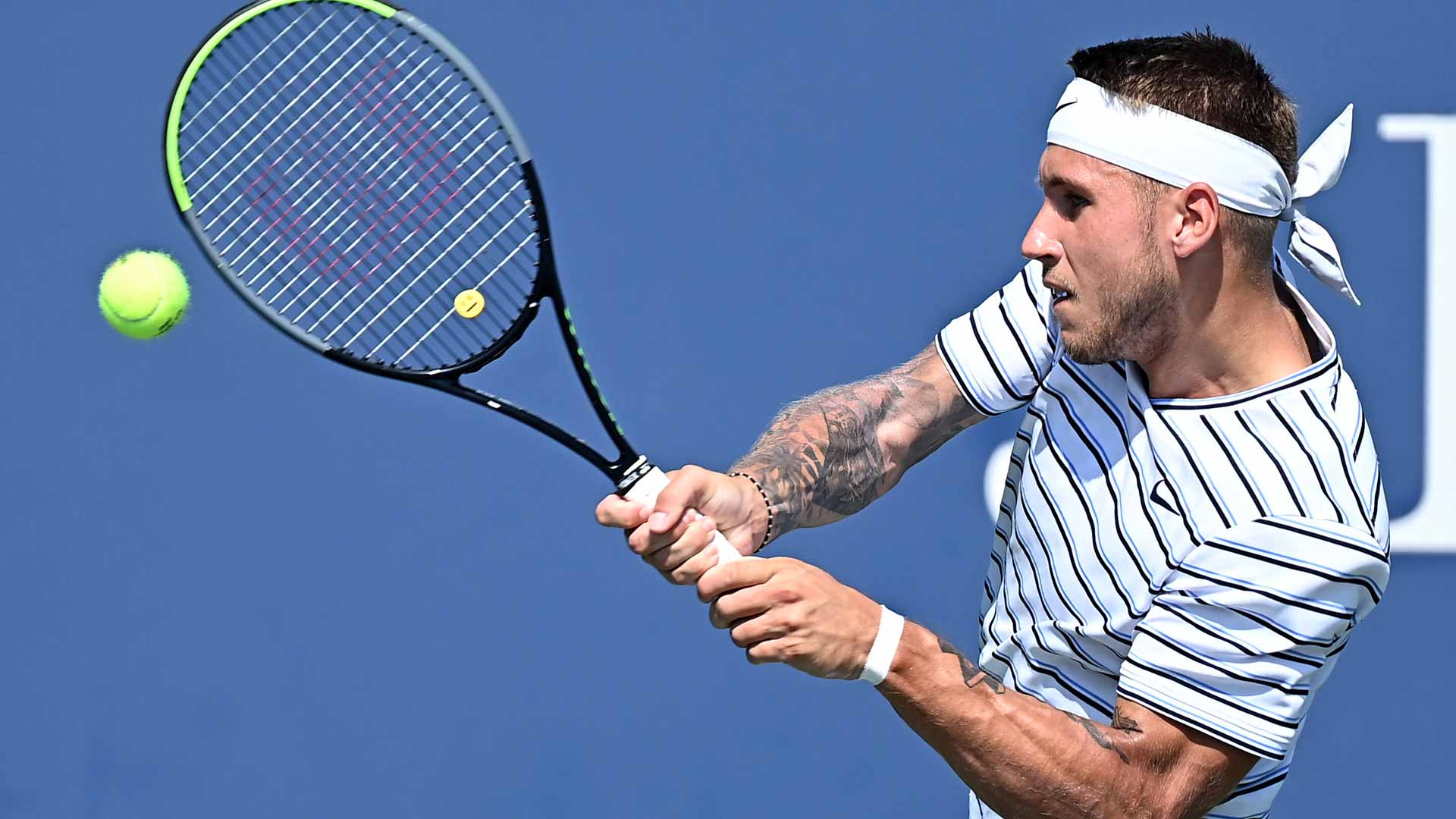 Photo Credit: Pete Staples/USTA
When Molcan first moved, he was not sad or scared because he had friends who had also moved to Bratislava and were doing well. The family had some help financially, but things were not always easy.

“There were some bad moments of course. We didn’t have money, so she had to start to work. It was crazy. We moved with my little sister, who was two, three, four years old,” Molcan said. “[My mom] was working from 6 until 4 and my sister was at [preschool]. She finished her job, went for my sister or sometimes I had to go because she didn’t have the time. She was working basically all day. I was practising all day, my sister was in school. It was tough for us.

“But somehow we managed to stay there. She worked hard, I worked hard and after that everything was fine.”

When Molcan was 15, his mother moved home, and he stayed with a friend and his family for a year-and-a-half.

“It wasn’t good because we were young and stupid and we did stupid things, classic [teens]. Then she moved back, because it was the best thing possible,” Molcan said. “Then when I was 18, she left again to Presov. Since then I’ve lived there with my brother and my girlfriend.”

Molcan is thankful for the opportunities his mother provided him and their family. When he was 18, he showed it by getting his first tattoo, which depicts her birthday.

“I went one day after my birthday to the tattoo artist and the first thing in my mind was I had to have her birthday,” Molcan said. “It clicked, I knew I would get that one.”

Tattoos have become a big part of Molcan’s life. Among those he has are a tiger, a temple, a lotus flower, Buddha and an image of mythological hero Perseus.

“Every tattoo has some meaning,” Molcan said. “I like many cultures. That’s why I have many cultural tattoos on my arm and also I’m starting on the other arm… Sometimes when I have a hard match, I look at my tiger when I need to fight. Then I look at Buddha because I need to think.

“I find that during the match I look at them and it gives me motivation.”

The Slovakian was a Top 20 junior, but several injuries — including to his wrist, shoulder and back — prevented him from finding consistency. Once, he even suffered an abdominal tear casually kicking a ball off court for fun.

But after beginning 2021 outside the Top 300, it has been a breakthrough season. Molcan qualified for his first two ATP Tour main draws in Antalya and Marseille. And then came his breakthrough in Belgrade, where he defeated Fernando Verdasco and Federico Delbonis en route to his championship clash against Djokovic.

“Since then many things have changed in my confidence. That was the big step up for me. Of course I’m trying to improve and trying to learn. I’m always looking back to Belgrade, because from there I took many lessons, especially from the final against Djokovic,” Molcan said. “It was the opening of a door for me to see how I should play tennis or how big tennis is played.

“I know that I have confidence now in my game. I know that I can play with these guys. I always knew that I can beat good guys. But in the past, sometimes I won a crazy match against a good player and then I lost against a different level player. I was having trouble keeping my level all the time for a tournament.

“Now I’m not jumping from good performance to bad performance. I’m keeping my level in the same line. Sometimes it jumps up and sometimes it goes down, but I’m still fighting because I believe in my game. I believe that I can beat anyone if I play really good.”

After falling short in his first attempt at qualifying for a major at Wimbledon, Molcan lifted his first ATP Challenger Tour trophy in Liberec. The World No. 138 has shown his fighting spirit at the US Open, where he saved two match points in his final-round qualifying clash against Gastao Elias, and then beat Turkey’s Cem Ilkel in the first round of the main draw. Molcan will try to continue his impressive run against #NextGenATP American Brandon Nakashima.

“I am a fighter,” Molcan said. “I will fight on the court. I will try to win every point possible and I hope the fans enjoy my game.”