Spaniard to face Thiem in quarter-finals

Nadal held serve to love on nine occasions and landed 64 winners to reach his 12th quarter-final at Melbourne Park after three hours and 38 minutes. The World No. 1 improves to 5-3 in his ATP Head2Head rivalry against Kyrgios, levelling their hard-court record at 2-2.

Nadal has now won eight of his 10 matches this year. The 33-year-old started the 2020 ATP Tour season with a 4-2 record at the inaugural ATP Cup, leading Team Spain to the championship match (l. to Team Serbia).

As he bids to equal Roger Federer’s haul of 20 Grand Slam trophies, Nadal is also aiming to become the first man in the Open Era to win each of the four major championships on multiple occasions. The Spaniard has reached five Australian Open finals, lifting the trophy in 2009.

“It was a very tough match,” Nadal told former World No. 1 John McEnroe in an on-court interview. “In the beginning I was in control, but you’re never in control against Nick. When I made the mistake on serve in the second set, with one serve of mine, it was so difficult to break him again.

"I did the same in the fourth set, but he played a good game. I played a scary game at 5-4, it’s part of the sport and you have to accept it. I tried to recover mentally for 6-5 and then the tie-break. When he plays like today with a positive attitude, he gives a lot to the sport. He’s one of the best talents on Tour and I like the Nick Kyrgios of this tournament." 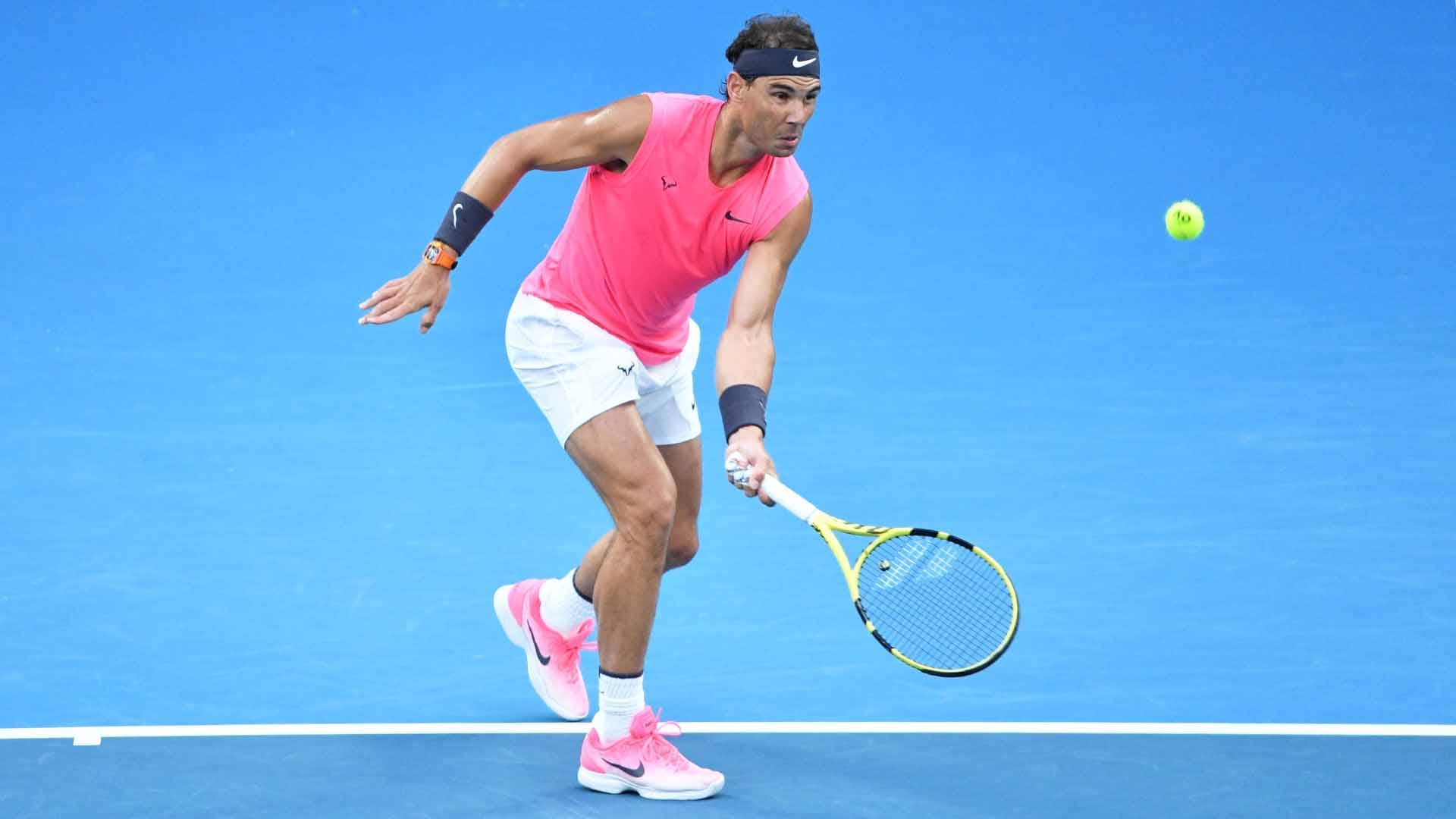 Nadal will face Dominic Thiem for a place in the semi-finals. The Nitto ATP Finals runner-up needed just one hour and 50 minutes to reach his first quarter-final at the opening Grand Slam of the year, defeating Gael Monfils 6-2, 6-4, 6-4. Nadal leads his ATP Head2head series against Thiem 9-4, highlighted by wins in the past two Roland Garros finals.

“It will be tough, we know each other very well,” said Nadal, when asked about facing Thiem. “He’s a great character and a tough competitor. I will need to play at my best, but I feel I am moving in the right direction. I played well against Pablo two days ago and again tonight against one of the best tennis players in the world. I hope to keep going.”

The top seed made a rapid start in the opening match of the evening session, breaking Kyrgios en route to a 4-1 lead. Nadal covered the baseline well, with Kyrgios failing in his attempts to shorten points as the errors mounted. The Spaniard began to dictate rallies with his forehand as the set progressed and held serve to love after 36 minutes to move into a one-set lead.

After saving three break points in the opening game of the second set, Kyrgios raised his level. The Aussie took advantage of forehand errors to earn his first break point of the match, which he converted with a forehand passing shot that clipped the baseline. From that point, Kyrgios won 12 of 15 service points to level the match. 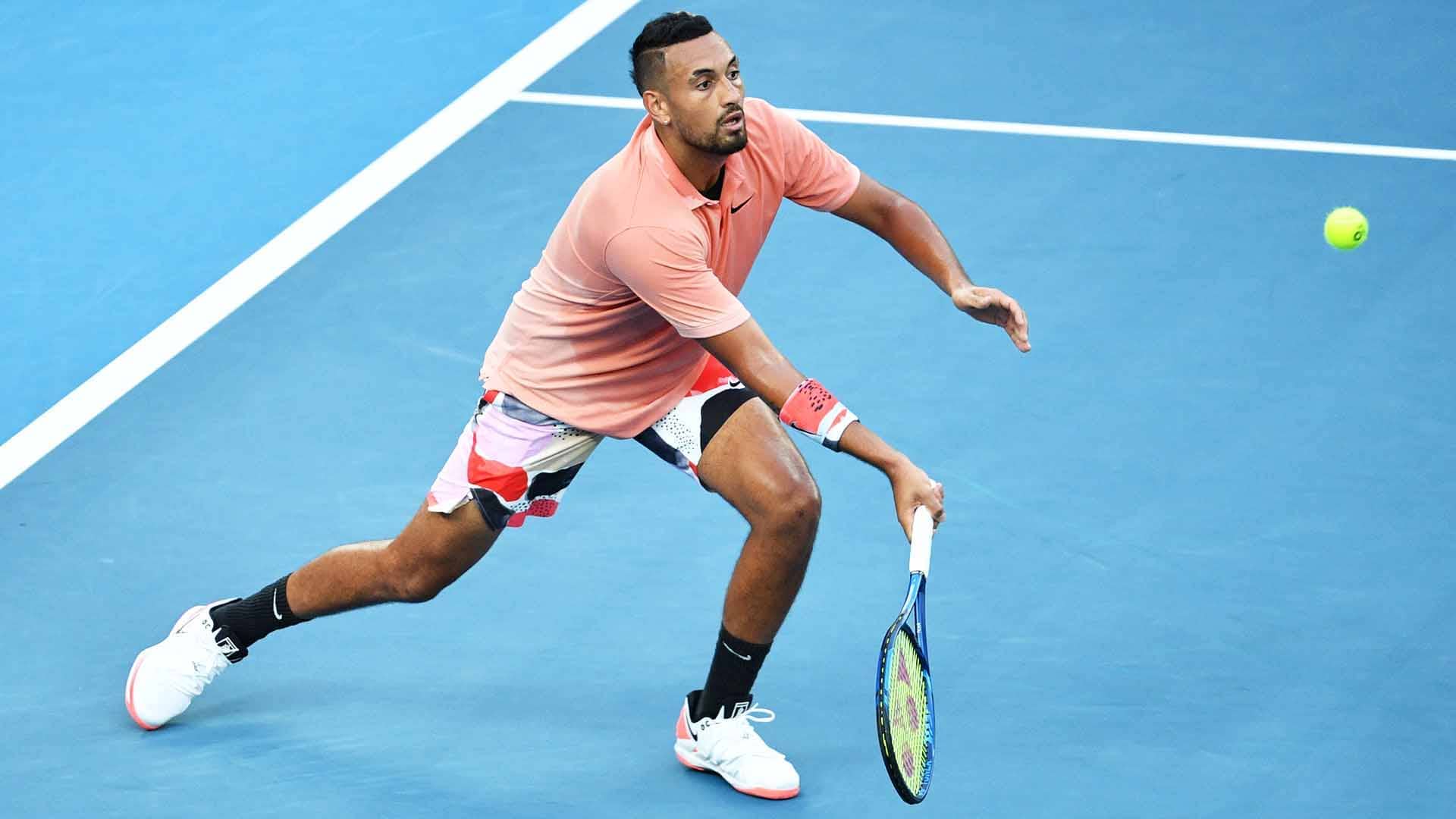 In the tie-break, Nadal charged the net behind forehand approaches to open a 4/1 gap. Despite forehand errors and a nervous double fault on his first set point, Nadal once again moved forward and clinched the set as Kyrgios struck a forehand into the net.

Kyrgios increased his aggression in the early stages of the fourth set, but failed to find the target. The Aussie handed Nadal a love service break at 1-1 with forehand errors and a double fault. Nadal continued to impress on serve with back-to-back love service holds, before Kyrgios stepped in and dictated rallies with his forehand to force his way to a tie-break.

After great court coverage, Nadal claimed the crucial mini-break as Kyrgios failed to clear the net with an attempted drop shot. The Spaniard closed the fourth-round encounter on his first match point, forcing Kyrgios into an error with a series of driven backhands.

“I played a bad game, that's true,” said Nadal. “I was playing great with my serve, winning all the games with very positive feelings. At 5-4, I got a little bit more nervous at that moment… I can lose, I can win, but I cannot play with more nerves than what I should.

“I did it already once, and I [did not] want to repeat that… At 6-5, I played a great game with my serve. In the tie-break, I think I was serving well. I think I played a solid tie-break.”

Kyrgios was aiming to reach his second Australian Open quarter-final and equal his best Grand Slam result. The Aussie defeated Lorenzo Sonego and Gilles Simon in his opening two matches, before an epic final-set tie-break victory against Karen Khachanov to reach the Round of 16.

“When he wants to play tennis, when he's focused on what he's doing, I think he's a very important player for our sport because he has a big talent,” said Nadal.

“He's one of these players that can be very, very interesting for the crowd… I saw him playing during the whole tournament almost every match, and he has been great, with a very positive attitude… His talent is to be one of the best of the world, without a doubt, with good chances to fight for every tournament.”