Alexander Zverev completed his dominant week at the Western & Southern Open Sunday by cruising past Andrey Rublev 6-2, 6-3 to lift his fifth ATP Masters 1000 title and become the first German champion in Cincinnati since Boris Becker in 1985.

The World No. 5 had never won a match in six previous appearances at the tournament, but produced high-quality tennis all week to back up his Olympic singles gold medal in Tokyo and capture his fourth tour-level trophy of the season.

“The first win I ever had on these courts was on Wednesday, four days ago, and now I have my first title here,” Zverev said in his on-court interview. “It has been an incredible week, a lot of great matches. It is an incredible feeling going into the US Open."

Zverev, who the night before rallied from a double break down in the third set against Stefanos Tsitsipas in the semi-finals, extended his winning streak to 11 matches. He also stretched his ATP Head2Head Series against Rublev to 5-0. The third seed was aggressive throughout against Rublev, firing six aces and winning 93 per cent (26/28) of points behind his first delivery to record victory in 59 minutes.

“I was playing pretty good tennis,” Zverev added. “I did not do a big celebration because I know how Andrey feels as well because we have been best friends since we were 11 years old and I know he is seeking his first Masters 1000 win, but it is going to come very soon I think.

“I don’t want to get ahead of myself yet. I won the gold medal and just won a Masters, which I am very happy about and am looking forward to New York.” 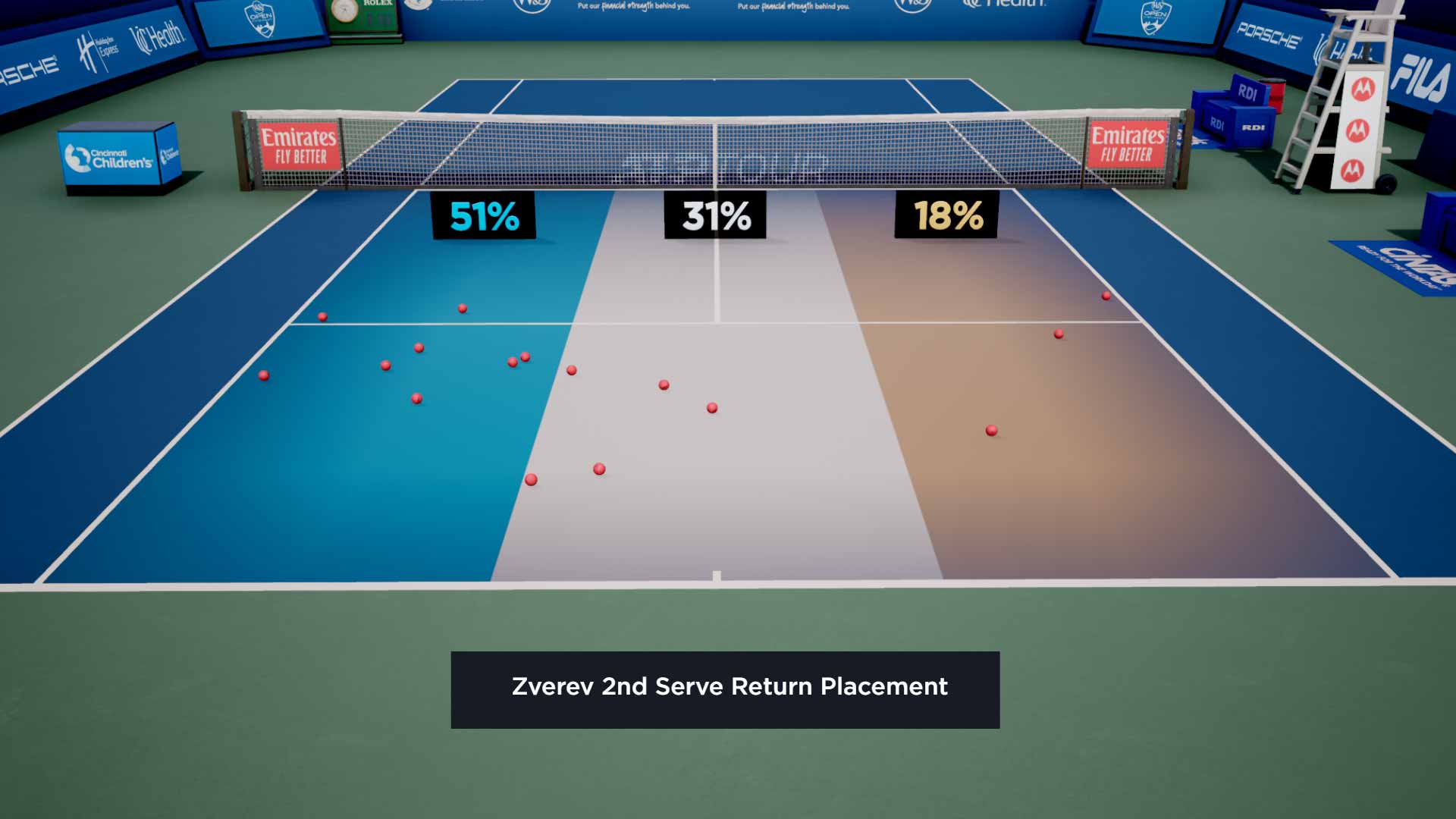 Graphics courtesy Hawk-Eye Innovations/ATP Media
Earlier this year, the 24-year-old captured the Mutua Madrid Open crown in May to end a three-year Masters 1000 title drought, while he also won the trophy in Acapulco on hard in March.

Zverev is now tied in ninth position for the most Masters 1000 titles won since the series started in 1990 and is the first player to win the Western & Southern Open crown and the Olympic singles gold medal in the same year since Andre Agassi in 1996.

In a lively start, Zverev flew out of the blocks as he played consistently and aggressively. The German hit with great depth and power on his groundstrokes to dictate from the baseline as he raced 3-0 ahead. Zverev was strong on serve throughout the first set, dropping just three points on it as he closed out the opener in 27 minutes with a forehand volley.

The second set started in a similar manner as Zverev soaked up Rublev’s heavy-hitting to force the Russian into errors as he broke again in the first game. Zverev then kept Rublev pinned behind the baseline as he produced heavy forehands and closed the net well to manouver the 23-year-old around the court. The 17-time tour-level champion continued to return well and broke for the fifth time to secure his impressive victory.

Fourth seed Rublev was competing in his second Masters 1000 final, having enjoyed a run to the championship match in Monte-Carlo in April. The Russian, who triumphed in Rotterdam in March to capture his fourth ATP 500 title, earned his first win over countryman Daniil Medvedev en route to the final in Cincinnati.

The World No. 7 was aiming to become the sixth different Russian to win a Masters 1000 title since the series began in 1990 and sixth different champion at this level this season.

“I am grateful for the week that I had," Rublev said. "I reached another final, my second [Masters 1000] in my career. It is a special place for me with great memories. The final didn’t end my way, but Alexander was playing unbelievably today.”