Andrew Eichenholz
This article contains:
Safiullin has risen to the occasion for Russia in Sydney

It turns out Russia has more than one secret weapon, which is a scary thought for the rest of the ATP Cup field.

One year ago, the championship-winning Russian team famously declared that Aslan Karatsev was the group’s secret weapon. Just weeks later, Karatsev made the semi-finals of the Australian Open and by season's end was named Most Improved Player of the Year in the 2021 ATP Awards.

On Sunday it was Roman Safiullin — not World No. 2 Daniil Medvedev — who led Russia to victory against France in singles and doubles. Safiullin is another “secret” out of the bag.

“One hundred per cent,” Medvedev said, cracking a laugh, when asked if his teammate was Russia's new secret weapon. “I definitely had some emotional moments in my career, but this one would be in the top three, top five, because, just look at Roman's match already, the way he fought back after tough first set where we can say he lost it quite easy, and then the way he fought back, the way he played was unreal.”

Medvedev and Safiullin have known each other since they were juniors, in which Safiullin triumphed several times. In fact, the Podolsk-native earned multiple victories against Medvedev.

“I first thought he was super tough to beat in juniors. I don't think we ever played in professionals. But when I knew that Roman was in my draw in [the] juniors, I was shaking,” Medvedev said. “We actually played a lot of finals, semi-finals, a lot of matches, some were like three-hour, three-set matches. [It was] a lot of fun.” 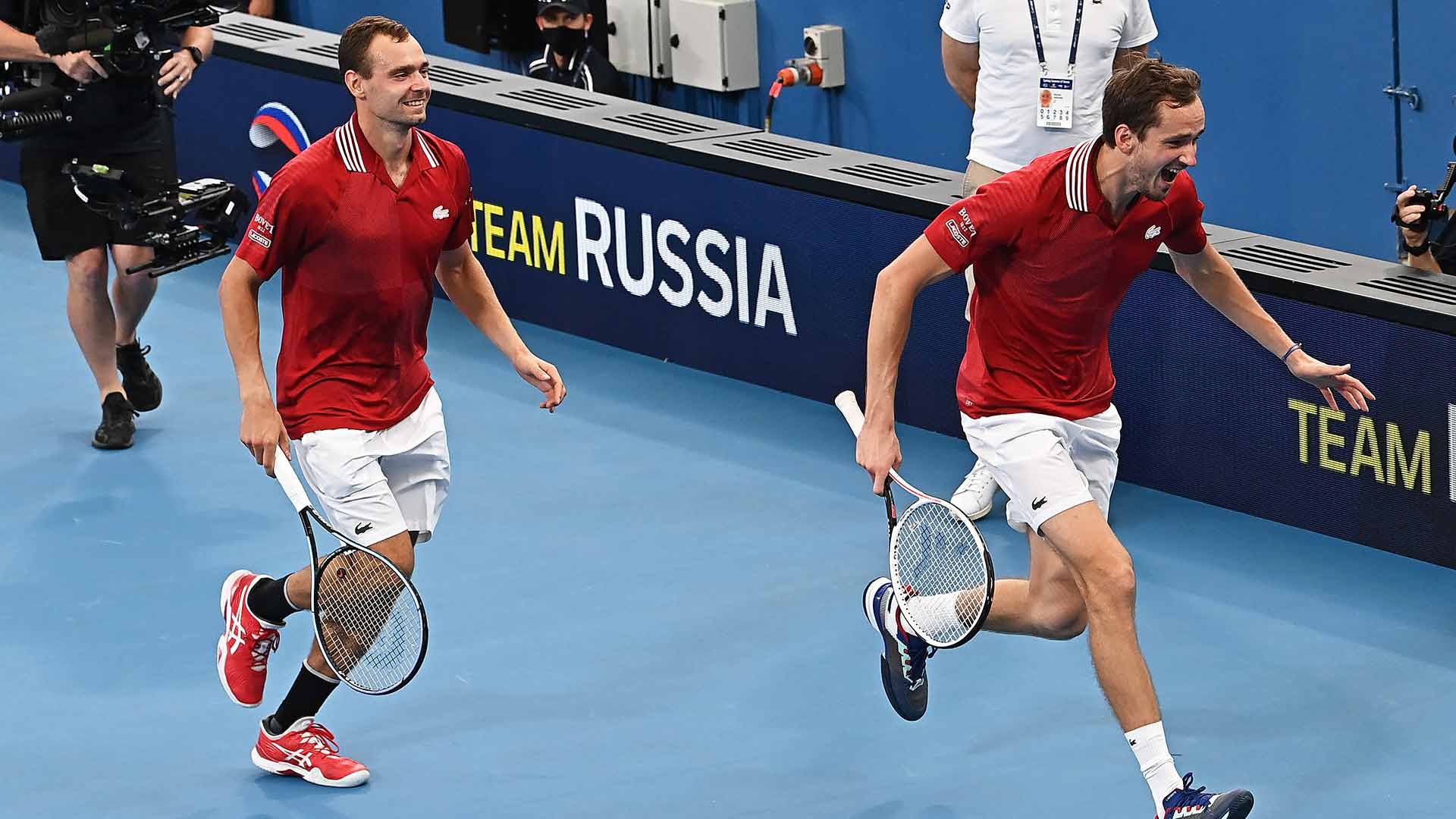 Photo Credit: Peter Staples/ATP Tour
Not only did Safiullin defeat Medvedev, Andrey Rublev and Karen Khachanov before turning professional, but he won the 2015 Australian Open boys’ singles title and climbed to a career-high World No. 2 in the juniors.

“It’s a great feeling of course to be at the top,” Safiullin said. “It was always [about] improving something to stay at the top. But junior tennis and men’s tennis are a bit different.”

While Medvedev, Rublev and Khachanov have all broken into the world’s Top 10, Safiullin’s career-high ATP Ranking is No. 151. The 24-year-old believes the mental side has been one of his biggest obstacles.

“Working with the head is the toughest part for me. I don’t know for the other guys, maybe for someone it is easy. The physical tennis part we work [on] a lot and the mental part we also started working [on] and at the moment that is the toughest part,” Safiullin said. “I’m working on it and trying to improve some things. When I lose focus, you can see it in the match.”

The Russian said that instead of letting three or four games slip away, it is pivotal to limit those lapses to a couple of points. The World No. 167 showed in Sunday’s tie against France that he has plenty of game to compete against some of the world’s best.

That is something Safiullin has been working towards his whole life. He first played tennis at four under the tutelage of his father, Rishat, who works at an academy. “I always have loved it,” he said.

Safiullin enjoyed the way Marat Safin played. Later on, Novak Djokovic became the player he looked up to the most, as well as Roger Federer, whom he called “incredible”.

Off the court, the Russian has a wide variety of interests. He enjoys playing tourist in the cities he visits, especially when his wife is with him.

“I [also] like cars and motorcycles. In Russia it’s tough to have it because we have the winter and only three or four months to drive it,” said Safiullin, who does not own a motorcycle. “When you’re a professional tennis player it’s quite dangerous, one mistake or someone doesn’t see you and it’s done. Either your life is done or your tennis career is done. That’s dangerous.”

Safiullin also fancies movies, with a fondness for actors Johnny Depp and Leonardo DiCaprio. Catch Me If You Can is one of his favourite films. Another might surprise you.

“When I have time, I rewatch Harry Potter. I’ve watched it already three or four times, but I like to watch it again. I saw [there is a reunion], so when I go back to Russia I want to go watch it with my wife,” Safiullin said. “Also there is a new Matrix that came out. I didn’t watch it because my wife wants to watch it so when I get back home we’re going to watch it together.”

For now, Safiullin will focus on helping Russia as it continues its ATP Cup title defence. The team’s newest secret is out. Safiullin just hopes to continue being a weapon for his country, and earn enough momentum to chase down his countrymen in the ATP Rankings.

“Daniil, Andrey, Aslan and Karen are on a really high level in the Top 30,” Safiullin said. “Four guys from Russia is incredible. I want to be there as well, so I’m working hard for that. I’m trying my best and hopefully I can come as soon as I can to be with those guys."