Celebrating the 50th anniversary of the Nitto ATP Finals, ATPTour.com looks back at Stan Smith’s run at the inaugural Masters in Tokyo.

Fifty years may have passed, but for Stan Smith the memories of the 1970 Pepsi-Cola Masters [now named the Nitto ATP Finals] remain crystal clear — the cavernous and cold arena, the single light bulb in the locker room, Jack Kramer leading fans in a rendition of ‘Happy Birthday’ to mark the inaugural champion’s 24th birthday, and the frantic dash from Tokyo to return home and start basic training in the U.S. Army.

As the likes of Novak Djokovic and Rafael Nadal prepare in their personalised locker rooms next week and head out through dry ice onto the main arena at The O2 in London, venue of the Nitto ATP Finals for the final time, they will pay homage to Kramer, the most influential person in the sport for more than 60 years. In 1969, Kramer worked alongside Philippe Chatrier, the then vice-president of the French Tennis Federation, and the first sports agent in tennis, Donald Dell, to hash out a futuristic plan for what was to eventually become an ATP Tour, 21 years later, and one of the sport's crown jewel tournaments, the Nitto ATP Finals.

During a period of enormous political struggle, when rival circuit promoters looked to sign the very best players, Kramer sought to bring the sport together. The great champion and former pro tour promoter wanted to solidify the game, give every player an opportunity to earn a decent living, not just a select few, and make the decision to switch to Open tennis pay off. So with the backing of the BBC, which agreed to finance the total television coverage that was broadcast by Fuji Television in Japan, and a title sponsor in Pepsi-Cola, the first top-level officially sanctioned tennis tournament came to a developing market — almost 40 years after the first head-to-head pro tours of Asia.

Fifty years on, Smith told ATP Tour.com, “There were six of us, initially, in the first year, but later the number increased to eight players in 1972, shortly after all the players came together to form the Association of Tennis Professionals (ATP) at Forest Hills [the former venue of the US Open]. Kramer, naturally, was one of the ATP founders and its first Executive Director.”

Cliff Richey, who had led on the 1970 Pepsi-Cola ILTF Grand Prix bonus pool — the forerunner of the FedEx ATP Race To London — the week before in Stockholm, arrived in Tokyo as a spent force. “Having played 40 weeks that year, he slept for 17 hours a day, and visited a doctor who thought he had hepatitis,” said Smith, who was in fifth position in the bonus pool. “He was simply exhausted and returned home to Dallas. John Newcombe was called for, but Jan Kodes ultimately stepped in to make up the elite group."

1970 Pepsi-Cola ILTF Grand Prix Rankings / Bonus Pool - Top 8
Twenty tournaments were graded into three categories - Class A, comprising the Grand Slam championships, Class 1 and Class 2 - to determine the number of ranking points available. Additionally, a bonus pool of US$150,000 was available for the Top 20 players of the 1970 Grand Prix circuit. 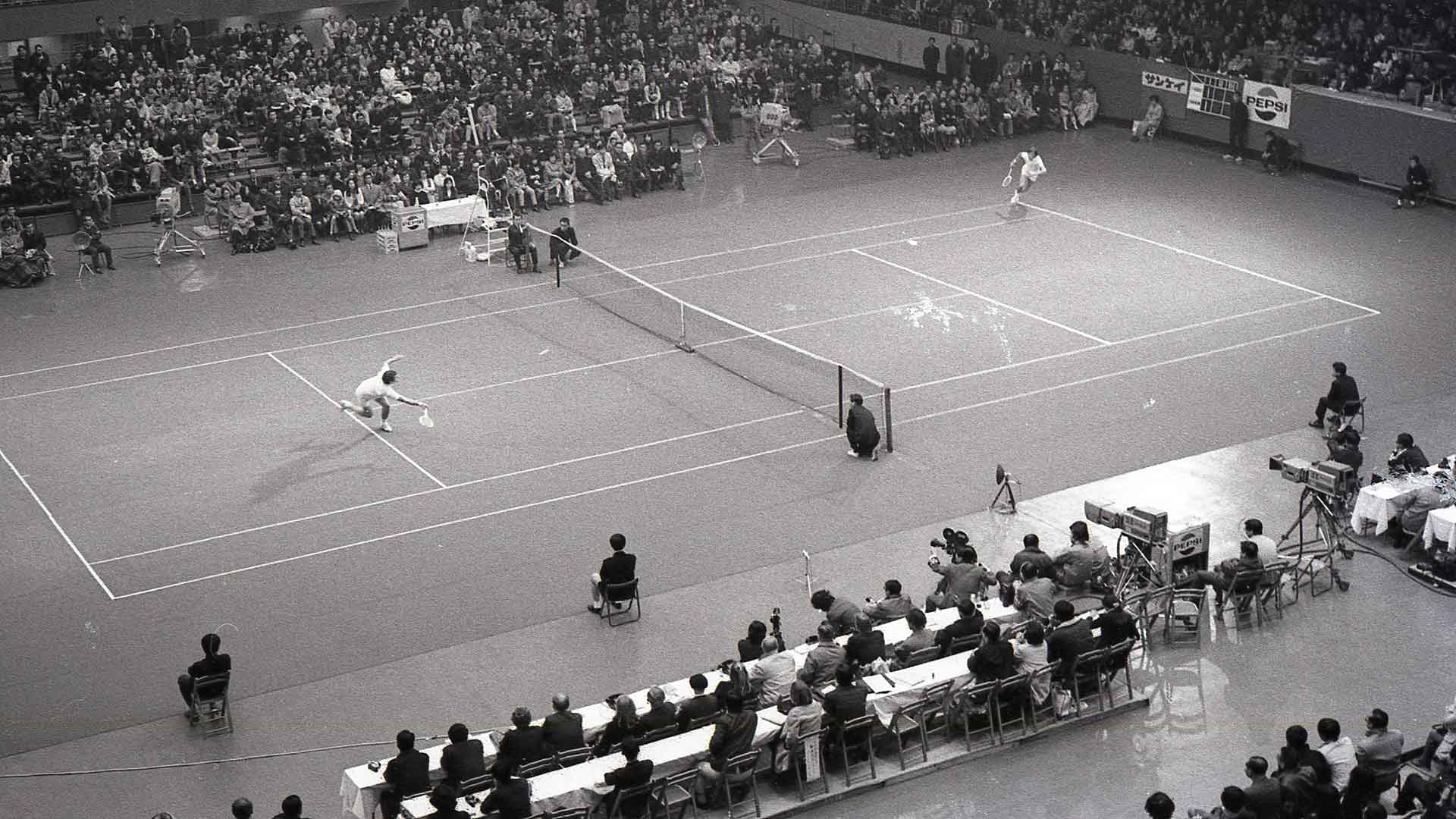 “Some of my rivals, who had arrived in Japan, went on a whistle stop tour of Sapporo and Kyoto to play exhibition matches," says Smith. "I remember hanging out with Zeljko [Franulovic] and Arthur [Ashe] a bit and visiting the Imperial Palace. There was no way that I thought it was the start of something special, when I stood alongside Ashe, Zeljko, Rod Laver, Ken Rosewall and Kodes in the lobby of Hotel Okura. We listened to Kramer and the President of Pepsi-Cola Japan [Russ Mooney], who sat in front of the flags of the United States, Australia, Czechoslovakia and Yugoslavia.”

Each day, Smith and the other players trained on the brown clay courts of the Tokyo Lawn Tennis Club, the second oldest club in Japan. They later arrived at the Metropolitan Gymnasium — scene of the first year-end championship — for matches on a fast rubberised court that attracted almost 10,000 fans each evening, courtesy of newspaper publicity and the visits of Her Imperial Highness Princess Chichibu. Imagine today, the elite eight practising on grass courts only to play their matches on the indoor hard of The O2 in London.

“Trestle tables and fold-up chairs lined each side of the rubberised court, which was connected together and set in the middle of the huge arena," remembers Smith of the 9-15 December 1970 event. "It really did seem like a throw-back to the pro tours. The venue also didn’t have any heating, so the Japanese spectators were wrapped in blankets, fur coats and scarves to keep warm. It must have been like sitting in a refrigerator for them. To this day, I still remember the stark, single light bulb in the locker room, which only had a small gas-heater to keep our muscles from seizing up as we prepared to go out onto the court.” 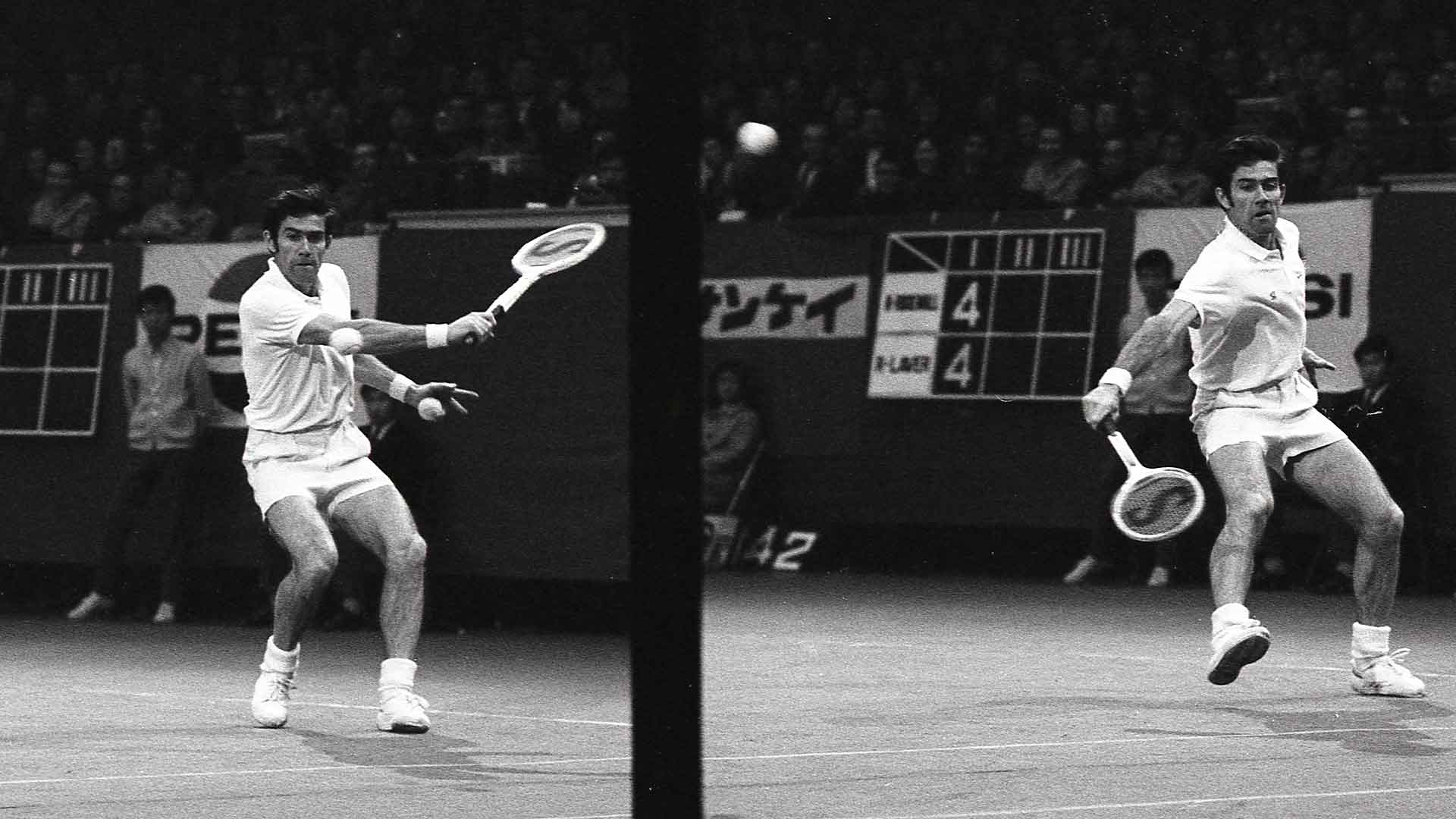 Smith played title-favourite Rosewall in his penultimate match of the round-robin tournament on 14 December, the occasion of his 24th birthday, knowing that whomever won would clinch the inaugural trophy. “As I served for the match, the court came apart,” recalls Smith, who used his slice serve to great effect in the Deuce court. “‘Muscles’ wouldn’t continue until the court was fixed, so we endured a 20-minute wait in the locker room, until it was glued back together. I went on to win 6-4, 6-5, when a nine-point tie-break was played at 5-5, with a sudden death point at four-all.

“Afterwards, Kramer came on and led the fans in a rendition of ‘Happy Birthday’. I also received a paddle tennis bat and a bouquet of flowers. It was also the day I got my final draft notice, and I was told to report on 16 December."

Smith adds, “While I lost my final match to Arthur, which started at 7 p.m., in a third set tie-break the next day, I finished with a 4-1 record, identical to Laver. I knew I had earned the title by virtue of beating the ‘Rocket’ [Laver, 4-6, 6-3, 6-4] earlier in the week. Having played with Arthur the week before in Stockholm, we also teamed up to win the doubles round-robin too, and after that week in Tokyo, I definitely started to feel like I was one of the top players.” 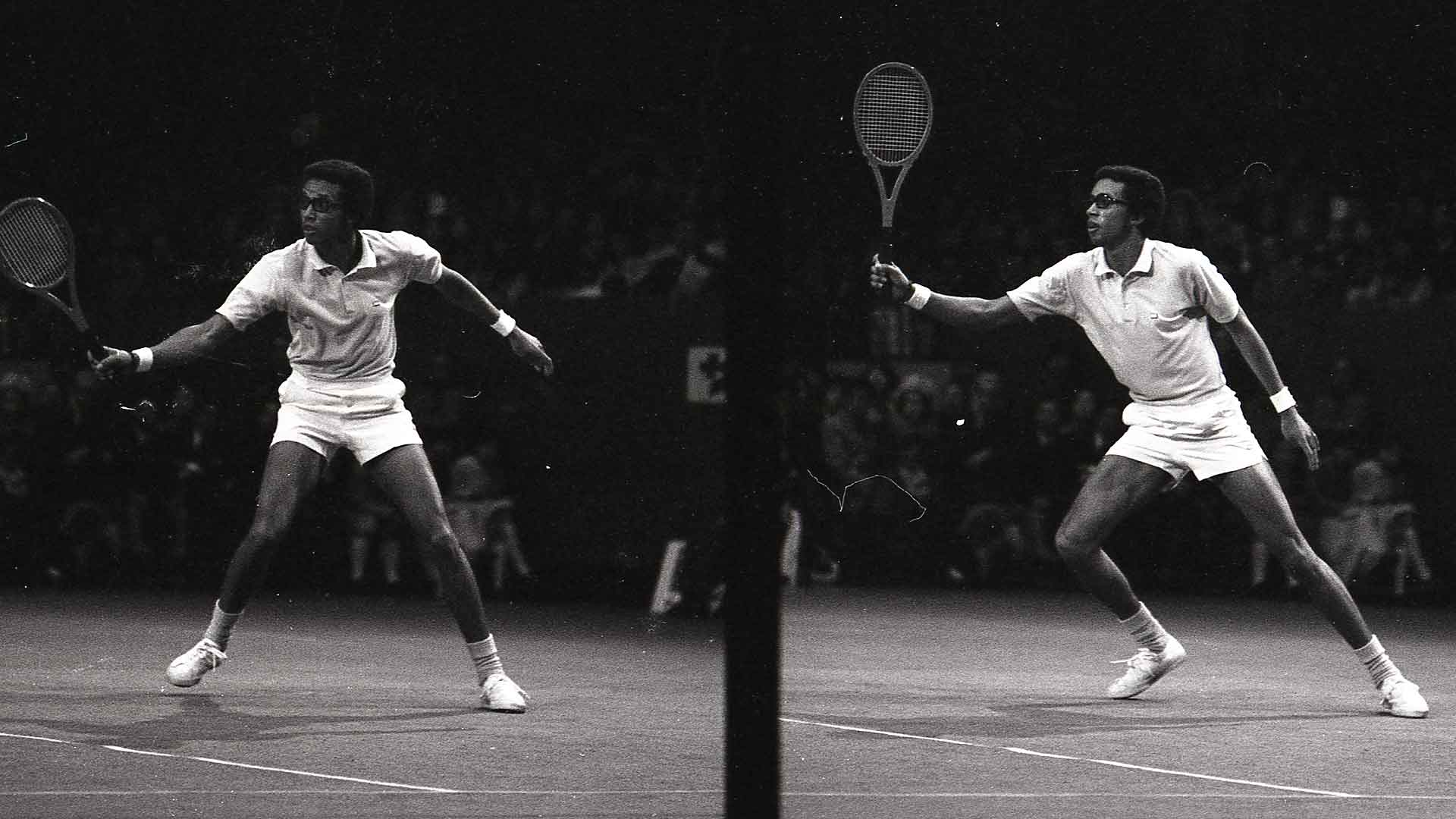 Just as the 20-tournament Grand Prix circuit of 1970 had begun, shortly before Roland Garros, Smith had learned that his draft number had been called, for what would become a two-and-a-half year tour of duty in the U.S. Army. So as he criss-crossed the globe in search of bonus points on the 1970 tennis circuit to become one of the lucky few to compete in Tokyo, Smith knew that he’d soon be drafted. “I was in Paris, during the French Open, when I read in the International Herald Tribune that they were doing the lottery and bringing the ping pong balls out of the bag,” recalls Smith, 50 years on. “I checked it out and saw that the letter 'S', for my surname, would be one of the last ones out of the bag. But then I realised that the key number for the draft was my birth-date and that translated to 23, so I would be definitely called.” 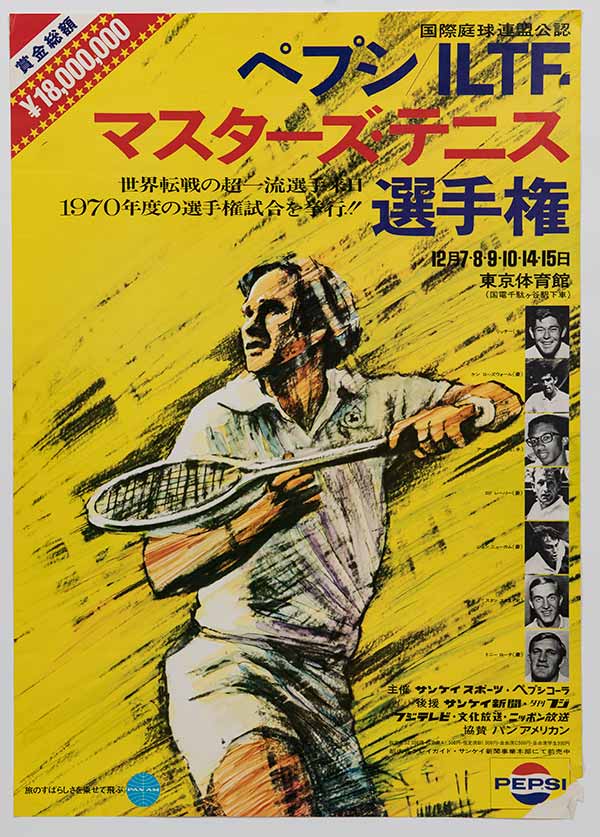 The tournament programme from the inaugural Masters in Tokyo, 1970. Photo: International Tennis Hall of Fame

The first prize for 1970 Pepsi-Cola Masters was a cheque for $15,000, a fortune at the time, but nothing compared to the $1,564,000 that an undefeated champion will take home at the 2020 Nitto ATP Finals. But Smith had little time to celebrate, as he headed to Tokyo airport for a flight at midnight.

“I got to L.A.on the morning of the 15th, got home within an hour to Pasadena, then the next morning I had to go back to L.A. to go to the draft board for 9.a.m.,” says Smith, who is now the President of the International Tennis Hall of Fame. “I took the physical and the guy who swore me in was a USC graduate and he said: ‘You have two choices: you can go on the bus outside and got to Fort Ord to prepare for basic training to begin on 26 December, or you can go home and have excess leave, but you won’t get paid.”

Smith decided to drive home for Christmas, and actually turned up at Fort Ord on 27 December, after 11 days excess leave with no pay.

While the Californian quickly finished his other Tokyo prize, a bottle of Pepsi-Cola, he still cherishes to this day the small trophy that he was presented at the Metropolitan Gymnasium. “I am very proud to be the first winner of the Masters event, which was also at a critical stage of my career,” said Smith. “I also feel proud of the fact we got the players together for the Tour we have today.”

You May Also Like: Light It Up: Why The Nitto ATP Finals Still Shines Bright
More stories like this in:
Premier Partner