Stefanos Tsitsipas won more than 50 per cent of points from defensive positions against Alexander Zverev at the Rolex Monte-Carlo Masters.

Why Tsitsipas Feels The Steal

Stefanos Tsitsipas gave opponents no place to hide during his successful title defense at the Rolex Monte-Carlo Masters in April.

Whether dictating play from offensive positions or turning the tables on his opponents when playing defense, the flamboyant Greek had all the answers, two new metrics from Tennis Data Innovations reveal.

Building on its recent launch of Balance of Power to enrich fans' enjoyment and understanding of tennis through data, TDI begins a deeper dive during the Mutua Madrid Open with its public reveal of Conversion and Steal scores, now available for all players from all matches at ATP Masters 1000 tournaments.

In Monte Carlo, when scores were tracked internally, Tsitsipas was tied for third on the Conversion leaderboard of the eight quarter-finalists and second on the Steal leaderboard. That dominance was no better reflected than in his semi-final win over Alexander Zverev, with some genuinely eye-popping numbers.

Zverev narrowly won the headline Battle of Power contest, playing from an offensive position 23% of the time to Tsitsipas' 21%. But Conversion and Steal scores told a deeper story.

Tsitsipas was far more efficient when he was in attack, converting 71% of the time to Zverev's 43% conversion rate. 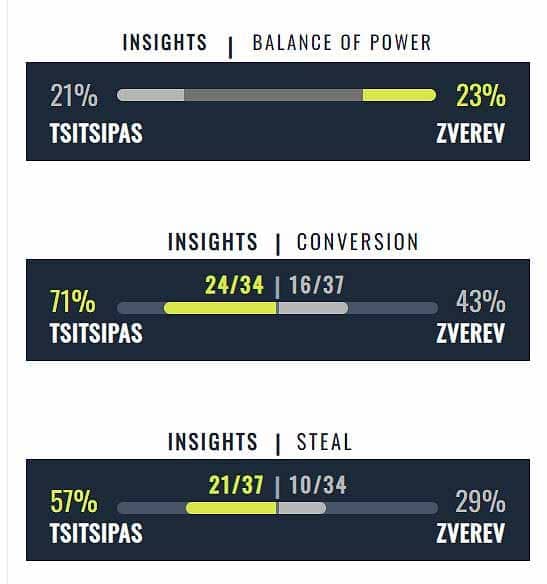 But the Greek’s ability to dig out of trouble from a defensive position was even more telling. On average, a player wins a point just 35% of the time on clay from defense. But Tsitsipas flipped the script with a Steal score of 57% against the German.

Conversion and Steal scores will feature on ATP Media’s world feed during Madrid and Rome, in Tennis TV’s court feed match insider section and in match reports on ATPTour.com. Follow along for a better understanding of how data can reveal the secrets to players’ success.

You May Also Like: Balance Of Power Stat Debuts In Miami, Medvedev Is Case In Point
More stories like this in:
Premier Partner