The Wimbledon Queue has been a long-standing Wimbledon tradition.

The Wimbledon Queue: One Of Sport's Greatest Traditions

Sam Jacot
This article contains:
Fans of all ages camp out in the hope of watching their favourites compete

From strawberries and cream to players sporting all-white kits, Wimbledon is an event that has been steeped in tradition since 1877. It is a day out that underpins the British summer, with thousands of fans attending the action at SW19.

The majority of supporters turn up fresh-faced following a good night’s sleep. For others, though, their Wimbledon experience begins less than a mile away from the All England Lawn Tennis Club in a park, where they sleep overnight in a tent.

Since 1922, thousands of fans have camped out and joined the Wimbledon Queue in order to secure a ticket for the grass-court Grand Slam, with 1,500 tickets offered up daily across the show courts, while several thousand grounds passes are handed out.

Over the years, The Queue has become its own phenomenon, moving from the pavement on Church Road to the park in 2008 as its popularity grew. It is a key aspect of the Wimbledon experience and it is not hard to see why.

A stroll around the park during the fortnight reveals a feeling of energy and anticipation in the air. There is a constant hum of excitement as fans chat to their ‘neighbours’, recalling previous Wimbledon memories, while making bold predictions about the matches and players they are waiting to see.

For couple Chris and Freya, the experience has been extra special this year, with two-year-old son Raffi making his debut in The Queue.

“Wimbledon is the reason why you want to be in the UK in the summer because the events are what make the UK and Britain so special,” said Chris, 40, who has been queuing since he was a teenager. “We have come here off the back of Glastonbury, so we have done six of the past seven nights in a tent. We had never spent a night in a tent with a baby before last week and we thought it would be difficult, but Raffi has been a little trooper. He has loved it and he has slept better in a tent than at home.

“Three days ago he was dancing to Diana Ross on the Pyramid Stage at Glastonbury and now he is going to be cheering on Novak Djokovic on Centre Court!” 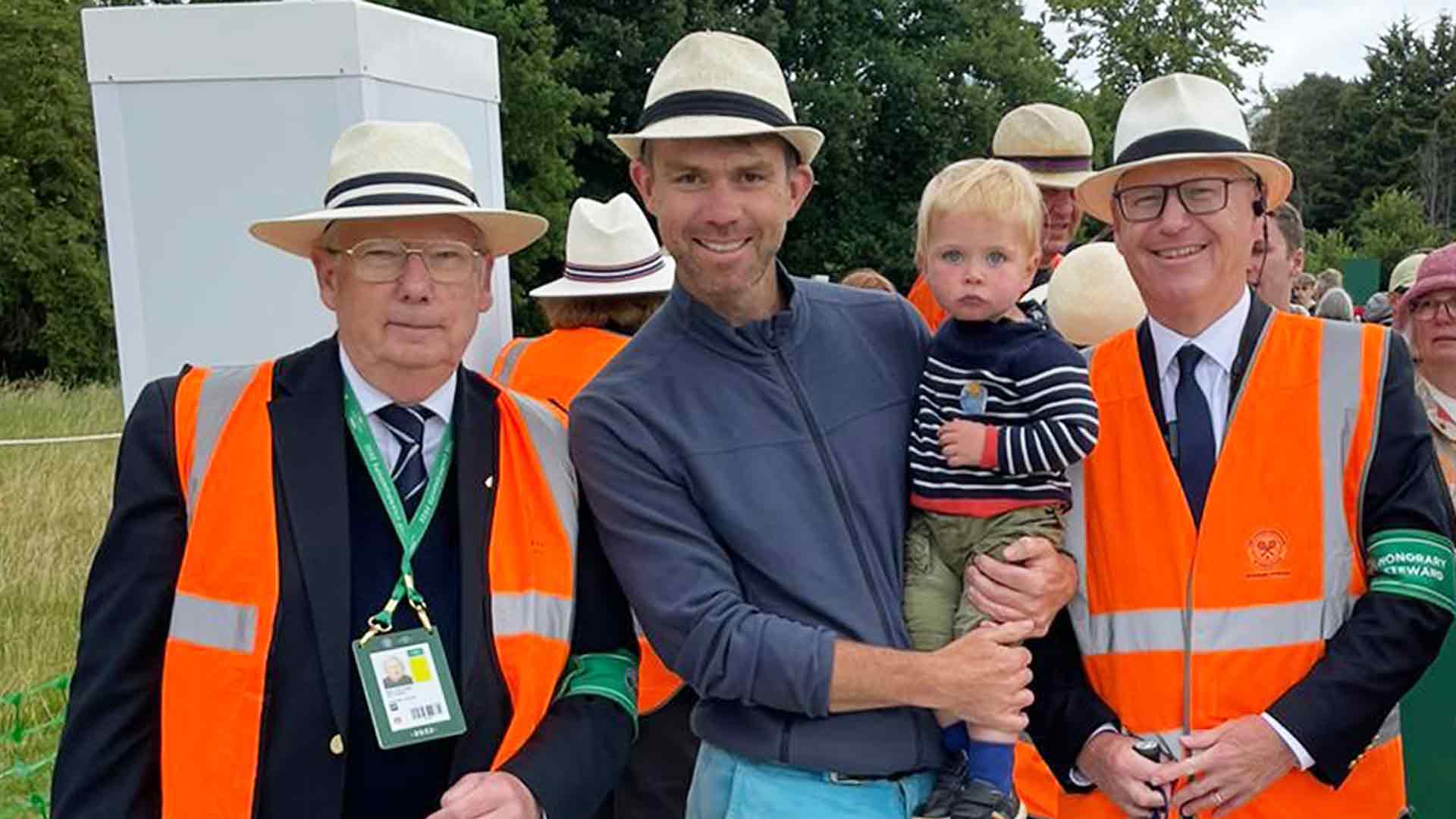 Photo Credit: Sam Jacot/ATP Tour
Just like on Tour, there is a vast array of ages and experiences in The Queue, with two-year-old Raffi standing just metres from seasoned tennis fan Ed, who first queued in 1977.

“We used to queue on the pavements and we were just in sleeping bags with no tents allowed," Ed recalled. "It rained on us, but it was fine. It was very informal, when we woke up on the morning I was here in 1977, we saw Martina Navratilova on the opposite side of the road and she gave us a wave! You just wouldn’t see that today. It feels five-star now. We have showers and you can brush your teeth.

“It is just so friendly and really personable. You meet people in the queue the night before and everyone is really positive and there is a real buzz. I came by myself this year, but I would do it again as you don’t feel like you are by yourself. It is just such a great experience.” 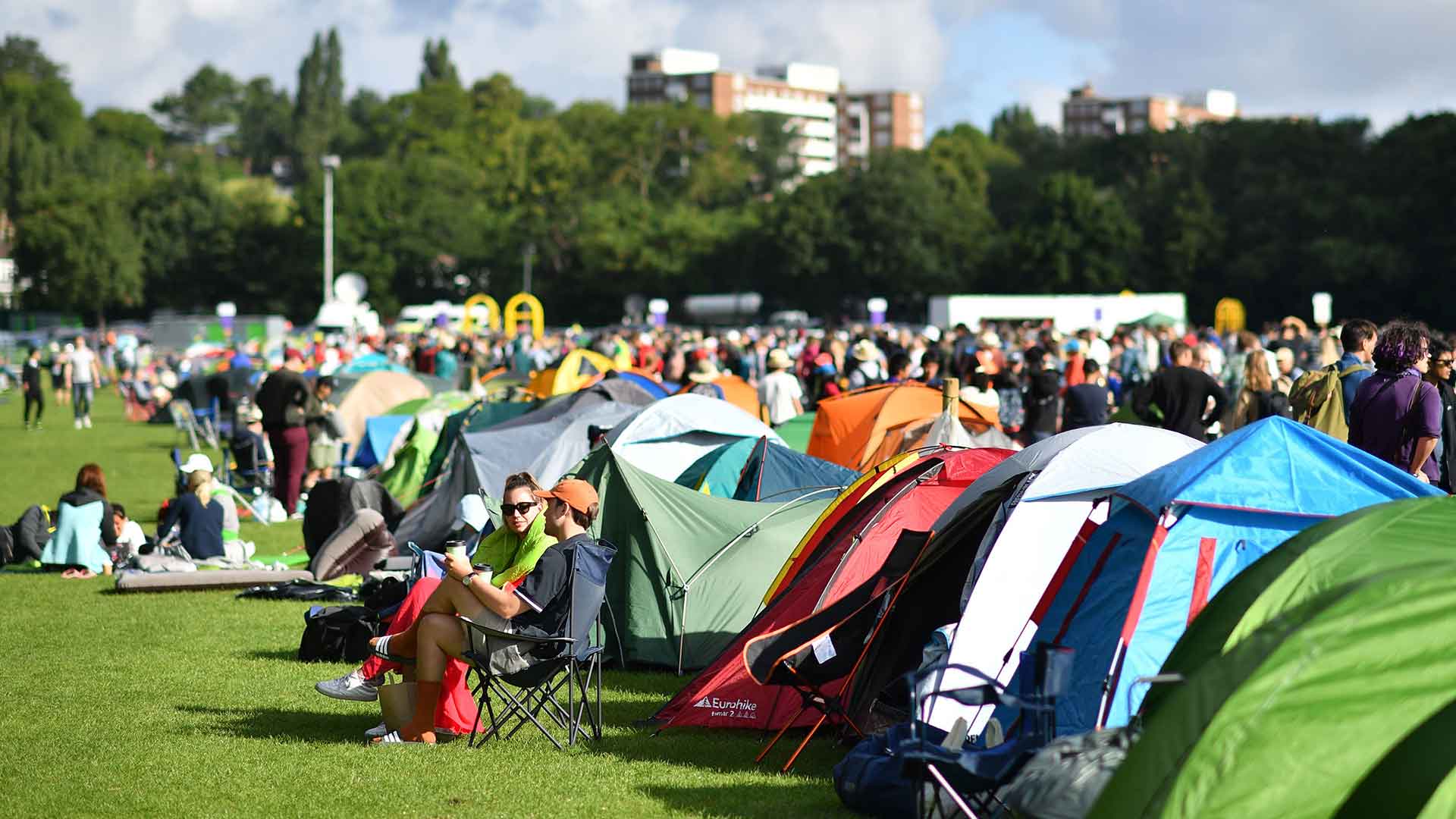 Photo Credit: BEN STANSALL/AFP via Getty Images
On arrival, fans are issued with a queue card that has a number that signifies their place in the queue. Then, on the morning of play, they are awoken by stewards at around 5 a.m. and guided slowly and safely towards the site, with entry into the grounds commencing from 10:30 a.m. Following the cancelation of The Queue in 2020 and 2021 due to Covid, its return was welcomed by all those involved in the operation.

“It is great because the queue looks after itself and many people come year after year and they know how it works. It is great to have it back” the head steward told ATPTour.com. “Our job is to get people in, in the right order and make the experience enjoyable. People really enjoy being in the queue, so if we can make them happy and get them in quickly, our job is done.”

After watching the action inside The All England Lawn Tennis Club, tiring fans can collect their tents from storage and head home after an eventful 24 hours.

However, some supporters aren’t ready to leave just yet. They return to the park, pitch their tent and join the queue all over again.