J.J. Wolf is into the third round of a Grand Slam for the first time.

Inspired By Agassi, Why J.J. Wolf Is Much More Than A Mullet

Long, flowing locks with streaks of blonde descend to his shoulders. Diamond studs dot both ears. And, with a bold attitude that exudes confidence, the Ohio native is in his opponents' heads before they even enter the court.

Sound familiar? The 21-year-old isn't fully embracing the Andre Agassi comparisons, but he isn't rejecting them either.

"I wouldn't say the hair is totally based off of him. It's a tribute to him, I'm fine with that," said Wolf. "I think he had fun with his style. I always enjoy watching his highlights. Such a talented player."

Wolf is taking the US Open by storm this week, reaching the third round in his Grand Slam debut. He has dropped just one set thus far, setting up a blockbuster encounter with 2019 finalist and third seed Daniil Medvedev on Saturday.

The swagger he displays on the court is not just for show. Wolf's confidence and unyielding self-belief is one of his greatest assets and it's something he's carried with him since he first arrived at Ohio State University.

Very little, if anything, intimidates him. He wasn't fazed against the best college players, earning All-American honours in 2019. And he immediately made a seamless transition to the pros, lifting four trophies on the ATP Challenger Tour in the span of just 13 months. His 14-2 record (.875) is second-best on the circuit in 2020.

Wolf will need to call on that bold and assertive mentality on Saturday afternoon, when he battles Medvedev on Arthur Ashe Stadium. Having previously never won a match at the tour-level, this is a moment he relishes.

"I work my butt off every day to try to get to matches like these. I'm going to try to make the most of it, see if I can play my best tennis."

Wolf was born to play a sport at the highest level. It wasn't a question of if, but rather which one he'd choose. When your entire family has found success in sports, J.J.'s fate was already sealed.

When we say 'entire family', that is not hyperbole. The Wolf clan's sporting heritage goes back to his grandfather Charley, who played professional baseball for the Cincinnati Reds and coached in the National Basketball Association for the Detroit Pistons and Cincinnati Royals. In total, 26 of Wolf's relatives have taken up a sport at either the collegiate or professional level, from basketball to baseball, volleyball, soccer, boxing, track & field and tennis.

"If you go anywhere in Cincinnati, someone is going to know one of us. My grandfather is a pretty big deal. When I played Cincy qualifying [Western & Southern Open] for the first time, all the questions from the local news sites were about my grandfather coming out to watch. All of us got our starts because of him."

His sister Danielle also played tennis at Ohio State, while his mother Brooke did so at Miami University and father Jeff competed professionally in the early 90s. 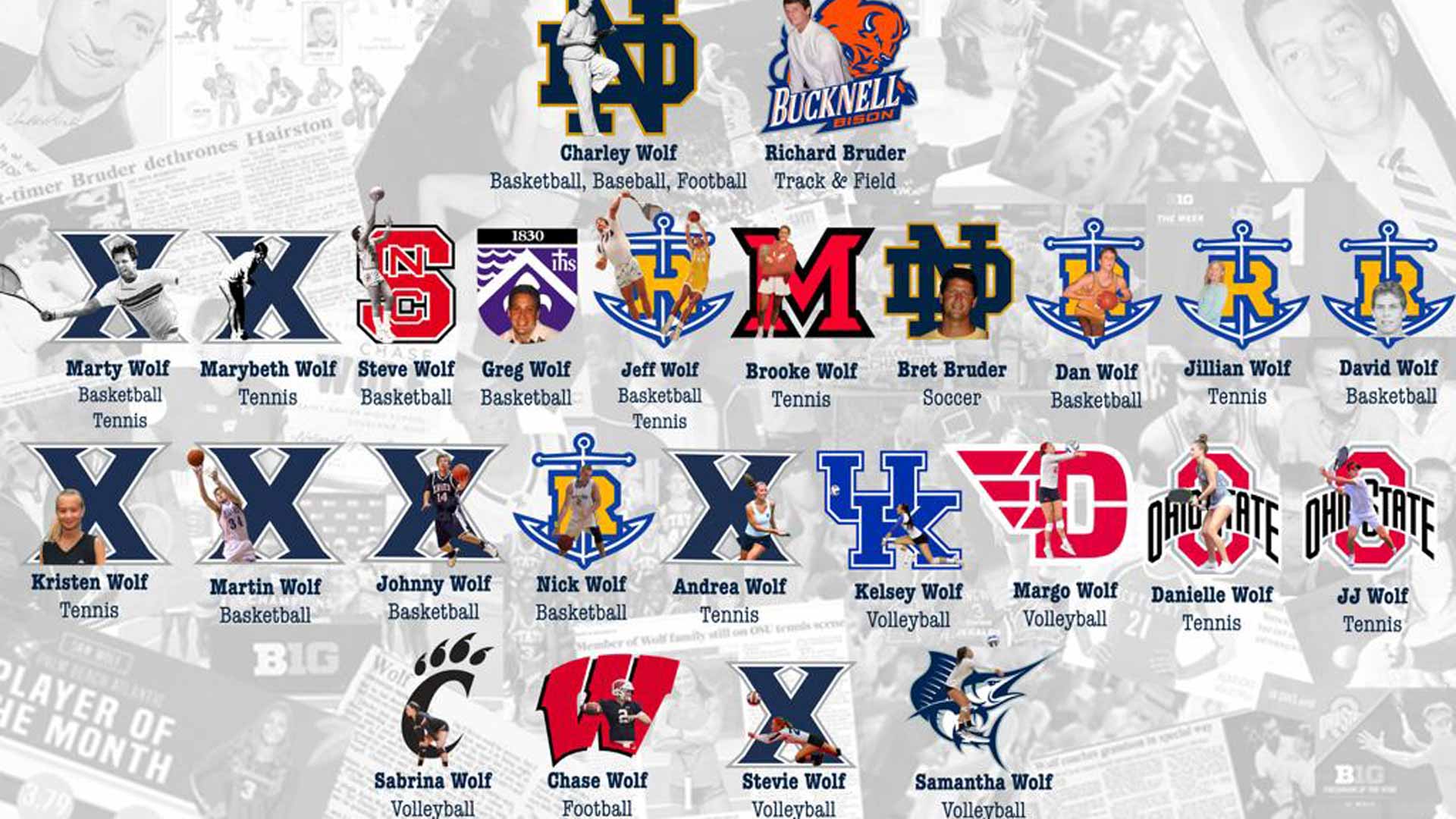 Safe to say, things get very competitive in the Wolf household.

"My family are my biggest fans," Wolf added. "My sister was also my first practise partner and my mom was my first doubles partner. We used to have some mixed matches when I was growing up. My sister and my father versus my mom and I. That was probably what sparked my competitive personality. My mom would not want to lose. She'd say, 'your father is going to tease us if we lose this'.

"I wouldn't be where I am today without them, that's for sure. They're very important people in my life and always will be." 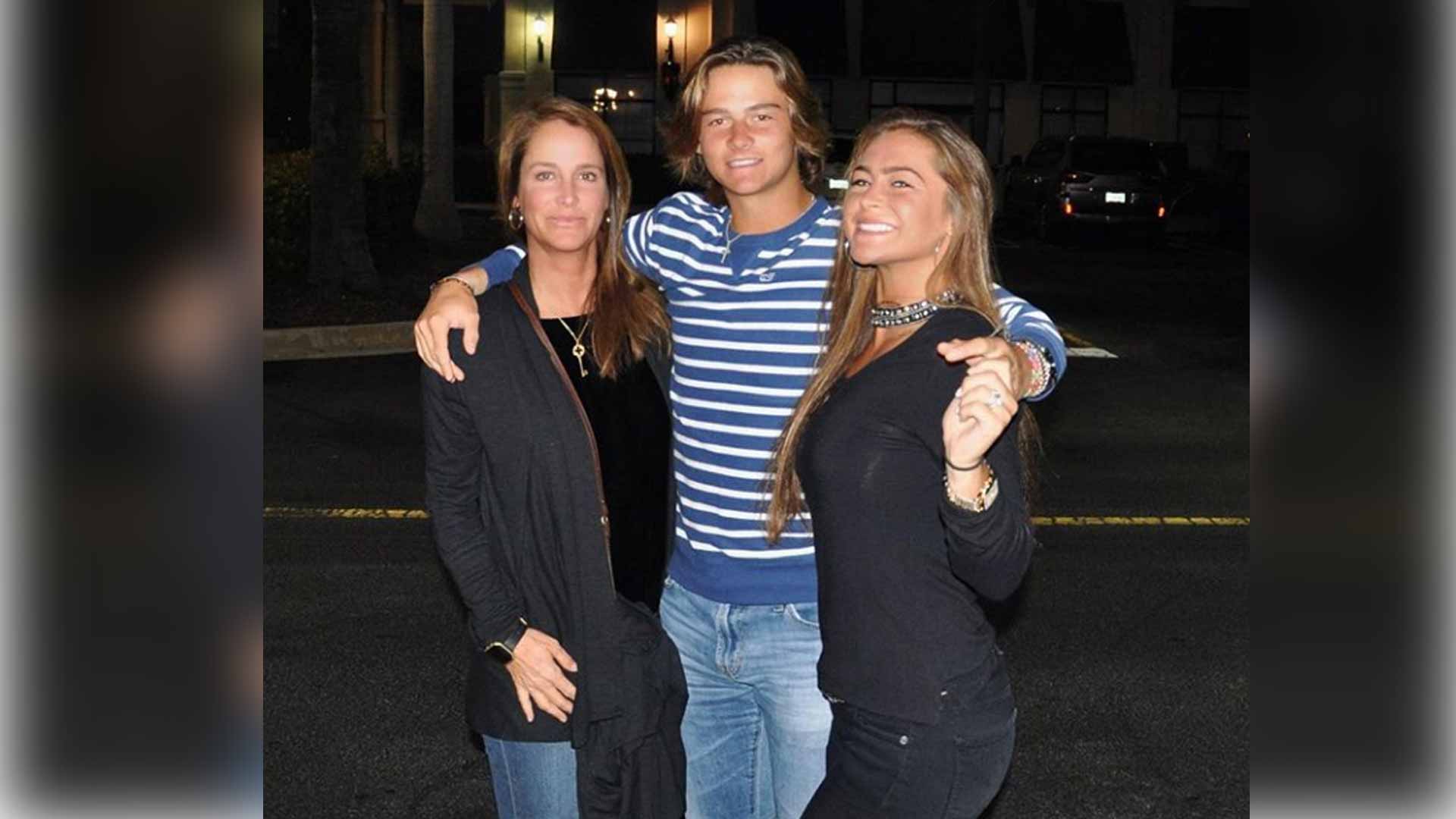 J.J. with his mom and sister

Wolf also played baseball, soccer and basketball until he was 16, all of which he believes contributed to his development on the tennis court.

"Soccer helped develop my footwork and quickness, playing basketball was good for my lateral movement and jumping ability, and baseball was great for keeping a live arm while serving and also strong hip rotation. That definitely helped my transition to the pros, not playing tennis since age five, and having the opportunity to grow all my skills competing in other sports.

"Tennis started out as a family activity, while we were on vacation, but I started playing a little more often as I got older. I probably would have burned out if I played only tennis growing up. My family never pressured me to pick a sport. I chose tennis because it came down to what I could control. On the court it’s all about you every point. It's like boxing. It's you versus the other guy and you only have to be better than him on that day."

During the COVID-19 hiatus, Wolf dedicated countless hours to bulking up in the gym and making sure his stamina and durability are at an elite level. He believes he's ready to go five sets with any opponent and is already no stranger taking the court with the world's best. In 2014, Wolf hit with Stan Wawrinka at his hometown Western & Southern Open and practised with Roger Federer while competing in qualifying in 2018.

Wolf points to the experience with Federer as one that made a big difference.

"I got to practice with one of my idols. I was so nervous, but we hit for an hour or so and then afterwards we sat down and spoke for about 30-40 minutes. It was small talk and advice about anything. That meant the world to me. I got to have a normal conversation with a definitely extraordinary human being. It just made me look up to him more. He's just a regular guy who has unbelievable accomplishments. He's so down to earth. It made me want to keep working hard and be someone with influence like him." 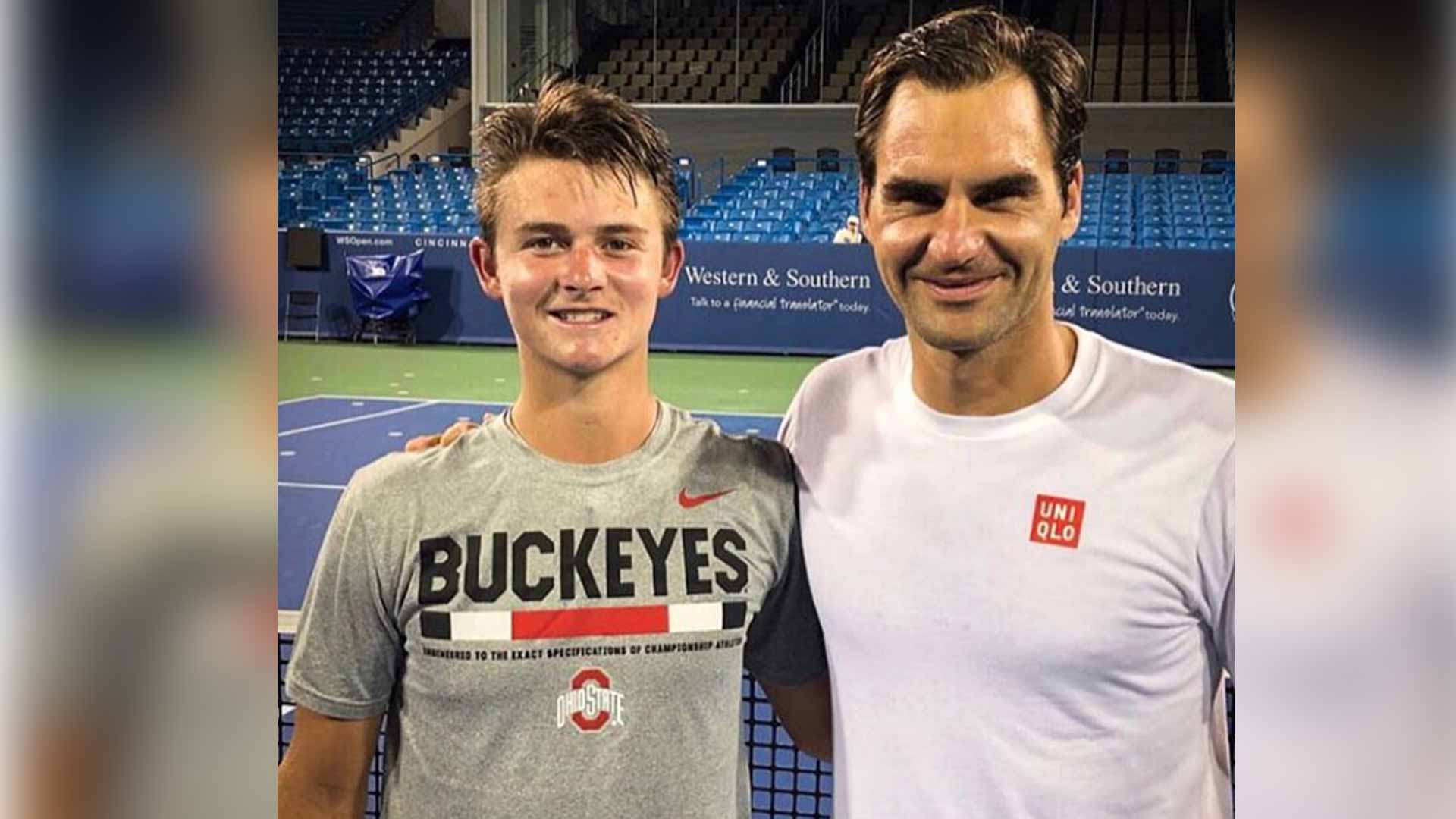 Wolf graduated high school early and attended Ohio State for three years, before turning pro in 2019. He says his competitive drive not only comes from his family, but also the college experience. Bringing the energy came natural for Wolf in Columbus and he has translated that to the professional level.

While still attending Ohio State, he won his first Challenger title on his home campus of Columbus in January last year. He would cap the season with a second crown in nearby Champaign and proceeded to open 2020 with his first victory outside the U.S., prevailing in Noumea. And the following month he would successfully defend his crown in Columbus, soaring to a career-high No. 138 in the FedEx ATP Rankings.

Following a pair of wins in his US Open debut, it won't be long before Wolf can call himself a Top 100 player. The American understands that this whole experience is a process. In order to arrive at this moment, he had to cut his teeth on the Challenger circuit.

"It's been a pretty whirlwind experience. I struggled my first few months on tour, but then I got comfortable with it. Opening 2020 with a title in Noumea was a big one. It was the first one out of the states that I won. That was important.

"My coach is big on having a developmental mindset, rather than it being results based. That is, judging yourself on improvements rather than whether you win or lose a match. First, you have to respect the Challenger level and not just try to get by. Before you can compete at a Grand Slam, that's what you have to do. I've been putting in the time so I can get there." 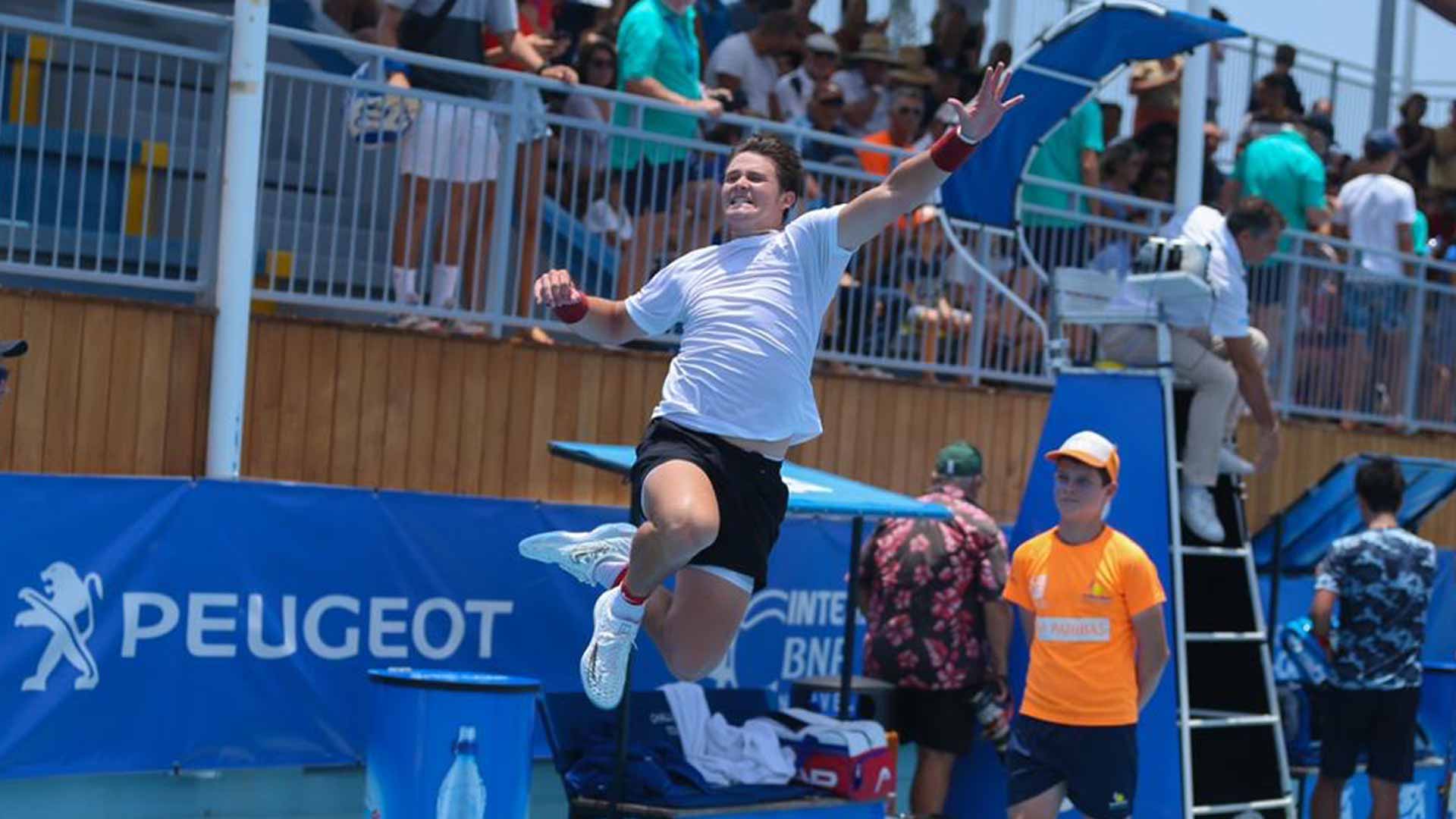 Wolf will look to extend his dream run in New York when he faces Medvedev first on Arthur Ashe Stadium on Saturday. A spot in the Round of 16 is on the line.