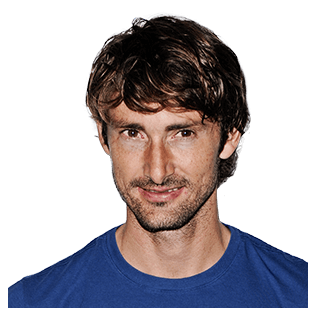 Personal
Juan Carlos Ferrero always appeared to be a sportsman fashioned in a bygone era. By nature of his personality, he let his tennis do the talking, remaining intensely private and loyal to those he trusted.

Determined to become a champion, working diligently to fine-tune his natural abilities – particularly on clay courts – in a disciplined yet understated manner, Ferrero never boasted about his greatness. Always charming, humble and stylish throughout his career, it wasn't in his nature to be a crowd-pleaser. His mother, Rosario, never approved of tennis players who were too exuberant. When she died in 1998, two years after Ferrero had left Onteniente to join Antonio Martinez at the Villena Tennis Academy, the 17 year old became withdrawn and resolved to dedicate wholeheartedly to professional tennis in her honour.

Having finished runner-up to Fernando Gonzalez at the 1998 Roland Garros juniors, it was clear he was going to be something very special, when, in the following year, Ferrero was named ATP Newcomer of the Year after rocketing up a colossal 302 places in the ATP Rankings to World No. 43. Twelve months later, he helped Spain capture its first Davis Cup title and for four seasons he was the man to beat on clay. Between 2000 and 2003, he compiled a 111-25 match record on red dirt – winning three of his four ATP Masters 1000 trophies – and went 23-2 at Roland Garros, where he finished runner-up in 2002 and captured the 2003 crown.

Seemingly, each year, he upgraded all aspects of his game – especially his serve and forehand. Without losing his agility, he played with great subtlety and deceptive power in order to consistently outclass Gustavo Kuerten and countrymen Alex Corretja, Albert Costa and Carlos Moya on clay courts. With men's professional tennis evolving at the start of the 21st century, El Mosquito's slight stature, speed, finesse and ability to conjure winning strokes from nothing delighted the purists and his willingness to improve on other surfaces was rewarded by a rise to the pinnacle of the sport.

Just three months after expectation became reality, when Ferrero beat Dutchman Martin Verkerk 6-1, 6-3, 6-2 for his lone Grand Slam championship title in Paris, the 23-year-old became World No. 1 on 8 September 2003, replacing Andre Agassi. Ferrero reigned for eight weeks until Andy Roddick, his conqueror, 6-3, 7-6(2), 6-3, in the US Open final, unseated him.

By example, he inspired a future generation of Spanish talent, including David Ferrer and Rafael Nadal. Ferrer exclusively told ATPTour.com, "Juan Carlos has been a very important player for Spanish tennis. He was World No. 1, he was the one who won the third point when Spain first won the Davis Cup and opened the way for many more players to follow and more Davis Cup victories of our country. He was and is my best friend on the tour. He's a person that is very close to me and a friend of many friends of mine. He’s a very humble and noble person."

In total, he spent 176 consecutive weeks in the Top 10 of the ATP Rankings until 13 September 2004 when injuries and loss of form took their toll. Headstrong, possessing an iron will, his love for the sport never faltered as he worked hard to return to the highest level. In 2009, he broke a 110-tournament title drought by clinching his 16th tour-level trophy at Casablanca and the following year, during the golden swing of Latin American tournaments, Ferrero produced a series of vintage performances in compiling a 14-1 record to return to the Top 20. Overall, he was 16-18 in finals.

Away from the spotlight, Ferrero eschewed a millionaire's lifestyle of a mansion on the Mediterranean coast and still resides at the academy, which harnessed his dreams as a teenager, playing golf and pursuing his passion for cars and bikes. With Martinez, his coach since 1989, he wisely looked to life outside of professional tennis while at the peak of his career by investing in a number of projects.

At 32, Ferrero called time on his career, highly motivated to succeed in sporting retirement with the La Fundación de la Comunidad Valenciana Juan Carlos Ferrero, which promotes sports for youth in and around Valencia, and more ventures.

In recent years, Ferrero has returned to the Tour in a coaching capacity. The Spaniard spent one year working with Alexander Zverev, and has been with #NextGenATP Spaniard Carlos Alcaraz for the past three years, helping the teen crack the world's Top 100 and win his first ATP Tour title in Umag in 2021. He then lifted his first ATP Masters 1000 crown in Miami in 2022 and his first Grand Slam crown at the 2022 US Open. On 12 September 2022, Alcaraz became the youngest player in the history of the Pepperstone ATP Rankings to rise to No. 1.