Spotlight On Picturesque Punta del Este
The lone clay-court event in January, all eyes are on scenic Punta del Este, Uruguay in the first month of the year. Located outside of the capital city of Montevideo, the beachside tournament is one of two Challengers in the South American nation. In 2019, players visited the famous La Mano de Punta del Este ahead of the tournament. A large, concrete sculpture located on the beach, the landmark known as 'The Hand' was built in 1982 by Chilean artist Mario Irarrázabal. It is one of the iconic sights of the city. 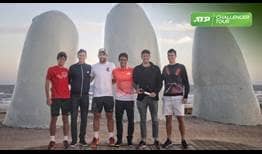