Ashe, Nastase At His Nastiest, And A Double DQ In Stockholm

Celebrating the 50-year anniversary of the Nitto ATP Finals, ATPTour.com looks back on a double disqualification at Stockholm in 1975.

It had been a season to remember for both Arthur Ashe, who had captured the Wimbledon crown, and also Ilie Nastase, a player who tried to be, at the same time, an artist and an actor. But on 30 November 1975, on the opening day of the $130,000 Commercial Union Masters [now named Nitto ATP Finals], Nastase saw his five-year winning record over Ashe coming to an end. In perhaps the most controversial moment in the 50-year history of the year-end championship, the very character of each player, the paper-thin tennis rulebook and, at that time, how the sport was officiated, were all called into question.

The seeds had been sown even before a ball had been hit, the night before. Sitting in the cocktail bar of the Grand Hotel, a home to high-profile events and celebrities for 100 years in Stockholm, Nastase was holding court, just 24 hours before playing Ashe in their opening match. As Ashe entered, Nastase asked, “How are you feeling? Good, I hope. I’m going to give you a hard time tomorrow.” Ashe, now sitting beside Nastase at the bar, laughed heartily at times — he knew what the Romanian was like — and soon sipped at his drink. Others were falling about laughing, listening to Nastase rattle on, when Ashe slipped off his stool to leave, prior to telling the barman, “That’ll be on Mr Nastase’s cheque.” As Ashe left, he tapped Nastase on the shoulder, a big grin on his face.

Fast forward to the next evening, and Nastase trailed Ashe 6-1, 5-7 and 1-4, 15/40, in the deciding set. Tensions were high, stoked in the locker room prior to walking out onto the indoor carpet court at the Kungliga tennishallen. Ashe, a winner of nine singles titles in 1975, had benefitted from some close line calls at 5-5 in the second set, which ended with Nastase striking a ball into the advertising boards at the side of the court, close to a lines judge. The 29-year-old was then warned for poor sportsmanship, and later stalled play and continued to stop Ashe’s service motion. Nastase was being heckled by a man in the crowd and walked from the baseline to scream, ‘Are you talking to me?’ Nastase, who’d also then won nine titles that year, then mimicked his opponent’s serve, asking, “Are you ready, Mr Ashe?”

By this stage, Horst Klosterkemper, the 36-year-old German referee, was sitting uncomfortably in his courtside chair, wondering if the chair umpire would take action. He didn’t. After a two-minute delay by Nastase, which saw him bounce the ball an inordinate number of times, Ashe said, “That’s it. I’ve had enough”. He stormed to the side of the court, picked up his spare racquet, a towel and jumper and began to walk off. Klosterkemper rushed on in an attempt to first disqualify Nastase but began to plead with Ashe. It was too late.

Klosterkemper, who would soon establish the World Team Cup at the Rochusclub in Dusseldorf, told ATPTour.com 45 years on, “At that time, the rules were so flexible that even I, as the referee, was not entitled to go on the court. But I thought I had to go down from my seat in the stands, because the chair umpire did not succeed in giving Ilie a definite warning or disqualify him. When they changed sides at 4-1, Ilie was stalling and talking to the public and I saw, from my point of view, the chair umpire didn’t do anything.

“Before I came onto the court, the chair umpire tried in a very polite way, asking Ilie to continue. Someone in the crowd shouted out, ‘Get on with it!’ Then Nastase turned around and talked to crowd. He then turned to Arthur on the other side of the net, ‘Are you ready Mr Ashe?’ There, I felt the chair umpire was too polite and didn’t control Ilie. So I made up my mind to disqualify him, but by the time I got to the court, I had no chance because Arthur was leaving the court.

“Arthur got so irritated that he went to his bags, picked up his racquets and I rushed onto the court, to ask him, ‘Arthur, please, stay on the court otherwise you disqualify yourself!’ And Arthur said, ‘I’m finished, that’s enough’. He then left the court, and I went back to the chair umpire, outside of the rules, to ask him to disqualify Ilie, which he then did. Ilie said, ‘No, no, I’m the winner. He left the court.’

Klosterkemper had umpired a few Davis Cup ties before being appointed as the 1975 Masters referee, but there were no professional officials at the time. “Bud Collins, who interviewed me courtside for NBC Sports, asked as to my professional status. ‘I’m sorry, I am doing this as an honorary job’, I said. Afterwards, Bud then said, jokingly, ‘Good luck, I’m sure that the lawyers of Ilie Nastase will get hold of you.’”

Minutes later, John Beddington, in his fourth year as Tournament Director, debated with Klosterkemper, the umpire and Hans-Ake Sturen of the Stockholm Grand Prix tournament, in the same locker room as Nastase, who was sitting rather sheepishly behind clothes and towels, unbeknownst to a still irate Ashe. “I had never experienced Arthur in a fury – he was really, really angry and I doubt if it ever happened again,” Beddington told ATPTour.com, 45 years on. “The problem which faced us was that Arthur’s offence — walking off court — was every bit as bad as Ilie’s. Taking the law into his own hands did not help and he refused to continue the match by returning to the court. Nobody wanted to default Arthur – and he had been provoked. After a considerable discussion, Horst decided to default both players, which would give them both a loss in the round-robin format.”

But by defaulting them both, the eight-player round-robin tournament — featuring two groups of four players — was broken. “I’ll appeal against that,” said Ashe, when the decision was made. “You won’t get away with it.” A compromise was needed and Klosterkemper, Beddington, Sturen and Commercial Union boss Geoff Mullis were soon debating with ITF President Derek Hardwick, who’d left the Kungliga tennishallen for the hotel only 30 minutes prior to the incident.

Ashe knew the rules as he’d helped write them, and years later, in the company of his wife, Jeanne, they sat with Klosterkemper at the Rochusclub in Dusseldorf during the 1979 World Team Cup. Ashe admitted, “That night, I knew I had to sit down and begin building on the Code of Conduct [which today amounts to 420 pages in 2020]. It’s a shame that this incident happened, you did your best. But the rules did not exist.”

“Arthur had an impeccable character and integrity,” Ashe’s good friend Fred McNair, who was competing with Sherwood Stewart in the 1975 Masters doubles, told ATPTour.com. “Arthur honoured the sport and honoured himself by rising above it. He could have forced Horst to take Nastase off the court, but he made a different statement, peacefully.”

The next morning, on what was the second day of the 1975 Masters tournament, the committee overturned Klosterkemper’s original decision after a four-hour meeting. “I still have the three-page letter Arthur handed me later on the evening of the match, appealing the default and declining to continue to participate in the Masters until a firm decision was made,” Beddington, the Tournament Director of the Rogers Cup between 1979 to 1994, told ATPTour.com. “Arthur claimed that a draw or a double default, was, in effect, no decision at all, and it was hard to argue against his logic. His letter ended by offering his ‘sincere regrets for any inconvenience caused’.” 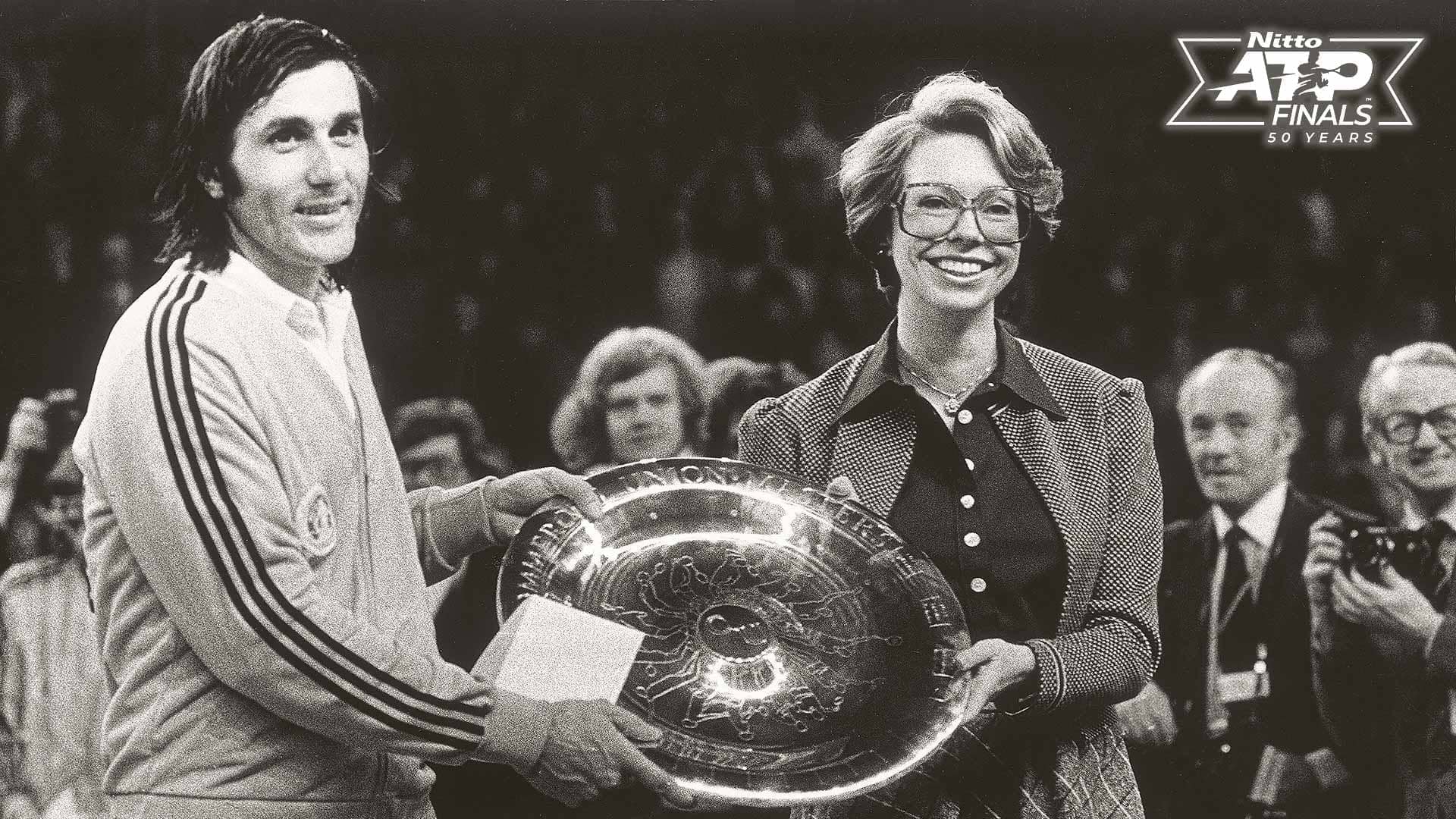 The impasse was short-lived and at a late lunch in the Grand Hotel, with Klosterkemper sat at another table, Nastase tip-toed over to Ashe to present the American some red, white and yellow flowers. “Please forgive me,” the Romanian said. “I forfeit the match. I give it to you.”

Ashe, the dignified ATP President and role model, called the whole episode a “travesty and a bad joke”, while for three-time Masters champion Nastase, who’d won 18 of 20 matches at the tournament in the past four years, it was the day that he learned a lesson. Even today, Nastase greets Klosterkemper by saying, “Thank you for disqualifying me, because from that moment on, I concentrated on my tennis.” Klosterkemper adds, “He knew it was his bad behaviour and he really did feel guilty. When he learned his lesson that night, he tried to play tennis properly.”

Ashe, who later admitted he was “mad for the first time in 10 years” in walking off the court against Nastase, went on to beat Adriano Panatta 7-6, 6-3 the next night to qualify outright for the semi-finals. So it was Nastase who watched on nervously, from the stands, two days later, as Manuel Orantes needed to beat Ashe in straight sets in order to join Bjorn Borg, Guillermo Vilas and Ashe in the final four. Otherwise, Nastase would qualify. There was no special reason for Ashe to extend a helping hand to Nastase. As he had already qualified, Ashe could have tanked the match to keep Nastase from qualifying for the semi-finals, but the American defeated Orantes 6-4, 6-1 with aggressive net play. Nastase left the Kungliga tennishallen after the first game of the second set, assured of his place in the semi-finals, where he’d meet Vilas.

“The most remarkable thing was that Arthur’s behaviour was exemplary, he was such a role model,” said Klosterkemper, who would return to the Nitto ATP Finals as Tournament Chairman in 1990, when the competition was played in Frankfurt. “If Arthur had lost to Orantes, even one set, then Ilie would not have been able to qualify for the semi-finals. But Arthur won two-sets-to-love, meaning Orantes was out and Ilie had a chance to come back. Imagine what that says about Arthur. I felt that Ilie learned his lesson that day and I am convinced that he really tried to concentrate on tennis, and that he showed the world that he was not only a clown, but he could also win events.”

Nastase didn’t lose another set all week. He went on to beat Orantes 3-6, 6-4, 6-4 and Panatta 7-6, 3-6, 6-0 in the Blue Group, then powered past Vilas in the semi-finals. Ashe lost to White Group runner-up Bjorn Borg 6-4, 3-6, 6-2, 6-2. John Barrett, in the World of Tennis Yearbook wrote, “Nastase, wielding his racquet like a wand, conjured pure magic from the ball in destroying Vilas 6-0, 6-3, 6-4. The young bull of the Pampas was reduced to impotence — every charge was parried; every attack blunted until the despairing Vilas was executed at the last by the flashing Romanian rapier.”

Nastase proved too strong for Borg, winning 6-2, 6-2, 6-1 in a final that lasted just 65 minutes to claim the $40,000 first prize. It was pure tennis and earlier this month, Borg told ATPTour.com, “I lost in the final to Nastase. There was a lot of pressure. I thought I had a good chance, but I didn’t play well in the final and Ilie did. I don’t really know what happened, I won five games over three sets.”

While it proved to be Nastase’s fourth and final Masters title, with his .880 winning percentage (22-3) remaining a record to this day, it was the double disqualification in November 1975 that set Ashe on a path to developing a professional Code of Conduct. From 12 points on a sheet of paper, the now 420-page book is very much the American’s work, 45 years on.

The 1976 ATP Player Handbook featured a photo of ATP President Arthur Ashe on the front cover, and the Code of Conduct on pages 10-18. 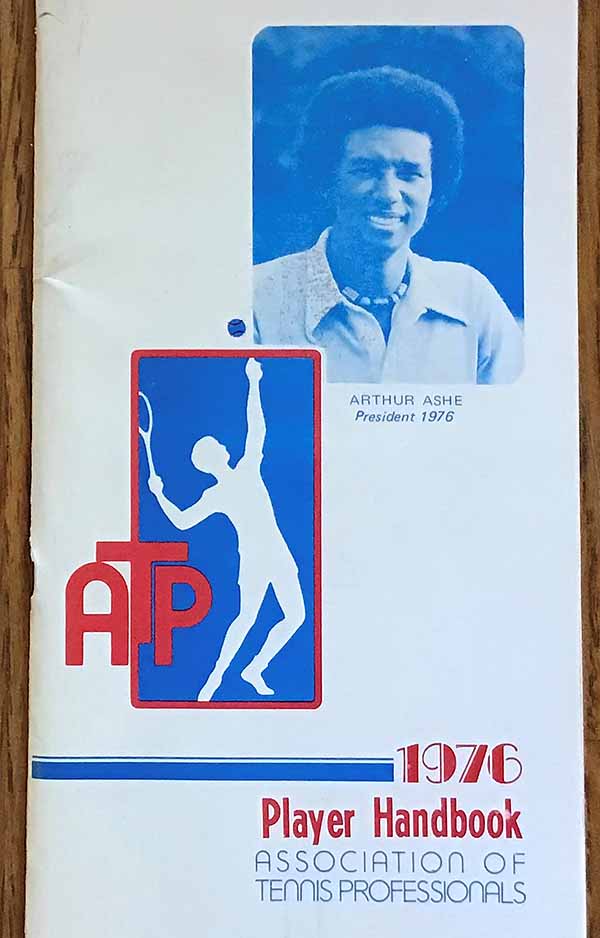