For Liam Broady, this was personal. After appearing in eight finals over seven years, the Brit is an ATP Challenger champion for the first time.

"It's been my personal vendetta for so long now," Broady told ATPTour.com.

Broady finally broke through to claim his maiden title on Sunday, prevailing on the indoor hard courts of Biel, Switzerland. He did not drop a set all week at the inaugural FlowBank Challenger, culminating in a 7-5, 6-3 victory over home favourite Marc-Andrea Huesler.

Players competing on the ATP Challenger Tour will agree that lifting a trophy is the first big goal in their professional journeys. Experiencing the glory of that maiden moment and clutching a piece of silverware for the first time is what everyone dreams of.

While Broady has certainly experienced his share of success since turning pro in 2014, winning matches at the Grand Slam and ATP Masters 1000 levels and becoming a mainstay inside the Top 200 of the FedEx ATP Rankings, that maiden Challenger title has eluded him ever since. The Stockport native would reach his first final in Charlottesville towards the end of the 2014 season. Over the course of the next seven years, he would have seven opportunities to lift his first trophy, but that moment never arrived. Until now.

On his eighth time of asking, Broady discovered the winning formula. He dominated from start to finish in Biel, refusing to drop a set all week. At the age of 27, he is the second-oldest first-time winner on the ATP Challenger Tour this year and the first British champion since 2019.

What does Broady attribute his Biel breakthrough to? He spoke to ATPTour.com after capturing his maiden crown on Sunday...

Liam, many congrats. How special is this moment?
It didn't look it, but in the last game of the match I was really nervous. As the last shot went by Marc, it was strange in my head because I was thinking 'wow, it actually happened'. I've been getting in my own way mentally for so many finals, that I was thinking that I just needed to allow myself to play. That's what I did today and it feels really good.

You said during the trophy ceremony that you weren't going to cry, but what are your emotions? Can you put them into words?
It's an immense feeling of pride and I feel like I've been justified over the last seven years of fighting for this. There were many times where I could have quit and stopped playing. I fell quite heavily through the rankings a few times and was playing ITF 15k tournaments and not really winning many matches. But I kept going and even when I didn't really believe so much that I'd get back to making finals of  Challengers. I've stuck with it and finally I've done it. It's been my personal vendetta for so long now.

Seven years is a long time. Eight finals is a lot of finals. What gave you confidence to finish the job today?
I saw a stat that I was the lower-ranked player in every final I played up until today's final. I always said to myself that once I'm a good enough player, I'd win a Challenger. You have to have that level on the court to do it and while I managed to scrap my way to finals, I never had enough game to turn those into titles. This year, I played Benjamin Bonzi in South Africa and he was great and then I got blown away by Andreas Seppi in Biella, Italy. But both times I felt different in the finals, whereas in the past I would have gotten in my own way. Today, I was nervous but I felt much more comfortable.

No one likes to lose seven finals. But with that experience, you learn a lot about yourself. What did you take from those moments?
I'm quite a stubborn person by nature, so it became a thing to myself to prove that I won't let those moments beat me. Like I said, a little vendetta. But the biggest thing I've learned playing on the Challenger Tour for seven years is that you can take the things you learn here to any walk of life. If you do the right things and behave the correct way and put 100 per cent in, you can only get the best out of the situation. You just don't know how long it will take.

Most Challenger Finals Before First Title

How much pressure did you feel over the years? Was it more internal or external?
I'd see people on social media saying there's no chance I'd win after so many finals, but those moments would actually motivate me more. To be honest, the person who gets in my head the most is me. Everyone can relate to that. When you're telling yourself that you're trash at something, your rubbish and you're no good, it's pretty difficult to believe that you can succeed. That's the thing about today. It takes a good tennis player to win a Challenger, but it wasn't the act of winning for me. It became a momentous challenge over the course of my career. That's what makes me feel so good about it.

You've been with the same coach - Dave Sammel - for so long. How important has his guidance been over the years? What did he tell you before the match today?
I've had some instability off the court over the years, which contributed to my career not progressing how I wanted. That first Challenger final in 2014 was when I first started working with Dave. He was a big reason why I'd done so well from the start. He's been a great source of stability in my life and he's a fantastic coach. The way I played this week comes down to him. After seven years you have to take on the philosophies of the coach [laughs]. You don't have much of a choice there.

We just had the most casual and light chat before the match today. In the past it might have been bigger chats, because he could see that I'm panicking. I remember a few times before finals I was in a bad place and didn't even want to go out there, whereas today we just had a chat. I told him I was nervous, he said it's normal and that if my level is good enough I will win. It was as simple as that today. 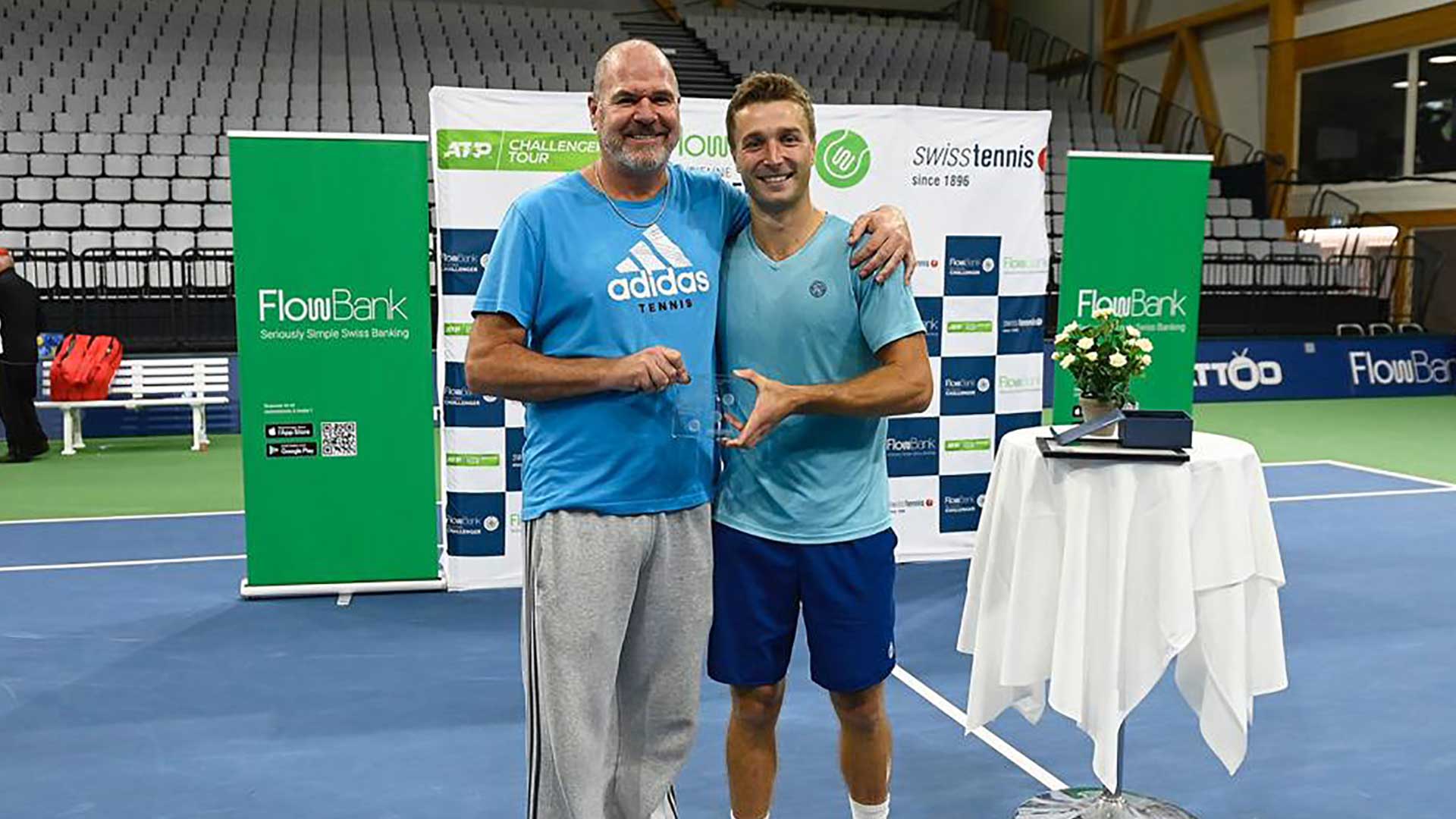 What has been the difference for you in 2021? You're playing the best tennis of your career and are Top 10 in win percentage on the Challenger Tour.
I made a commitment to my career at the start of 2020. It was at Australian Open qualies when I lost to Ilya Ivashka. I was trounced and it was a terrible match. My initial reaction was to go mess about in the city and get up to no good. The thing was, I had a fantastic preseason leading up to that. I was feeling awful and thinking that it just wasn't fair. I had done the best preseason of my life and then I won three games in my first match of the year.

But I was sitting there thinking that going out won't make me feel better. I've done it enough times in my life to realize that. I remember telling Dave at the time that I don't want to talk about the match, but I want to make a commitment to myself and to you that I'll make the right decisions over the next 12 months. I said that at the end of 2020 we'll see. I made the final of the Challenger in Parma and qualified for Roland Garros, which was the first time I qualified at a slam. I got a few rewards for it. That made me think that I wanted to do it the same way this year.

People have asked me the same question and I really believe it was that change in mindset I made at the start of 2020. In all walks of life, sometimes things take longer than you want them to. It tests your resilience and some people don't succeed because they fall off at the first hurdle or second hurdle, but these past two years I've tried to stay on the track as much as I can. Now I'm getting the rewards.

You didn't drop a set all week. What clicked in Biel?
I've been playing more aggressive this summer, but I came up against a red-hot Marco Trungelliti at US Open qualies, which was a shame because I felt I could have done really well there. Then I went to Mallorca and was completely done in by Matteo Viola. He made me forget my own name. After that, Dave told me that if I'm going to lose a match that I don't think I should lose, I might as well go out there and play to the game style that has brought me this success.

Then I went to Cassis and lost to Lucas Pouille, who has been a thorn in my side for my career. We've played a few times since we were 14. He played brilliantly and I don't think I necessarily played a bad match. Then I went to Rennes and again I was playing aggressive and felt well, but Bonzi was a match. I wanted revenge [after he beat me in the Potchefstroom final earlier in the year]. He was just too good for me on the day. I came into Biel and Dave just reiterated that if I'm going to play, to play the right way. Don't give up ground on the court. I started the week off well and kept going from strength to strength after that. 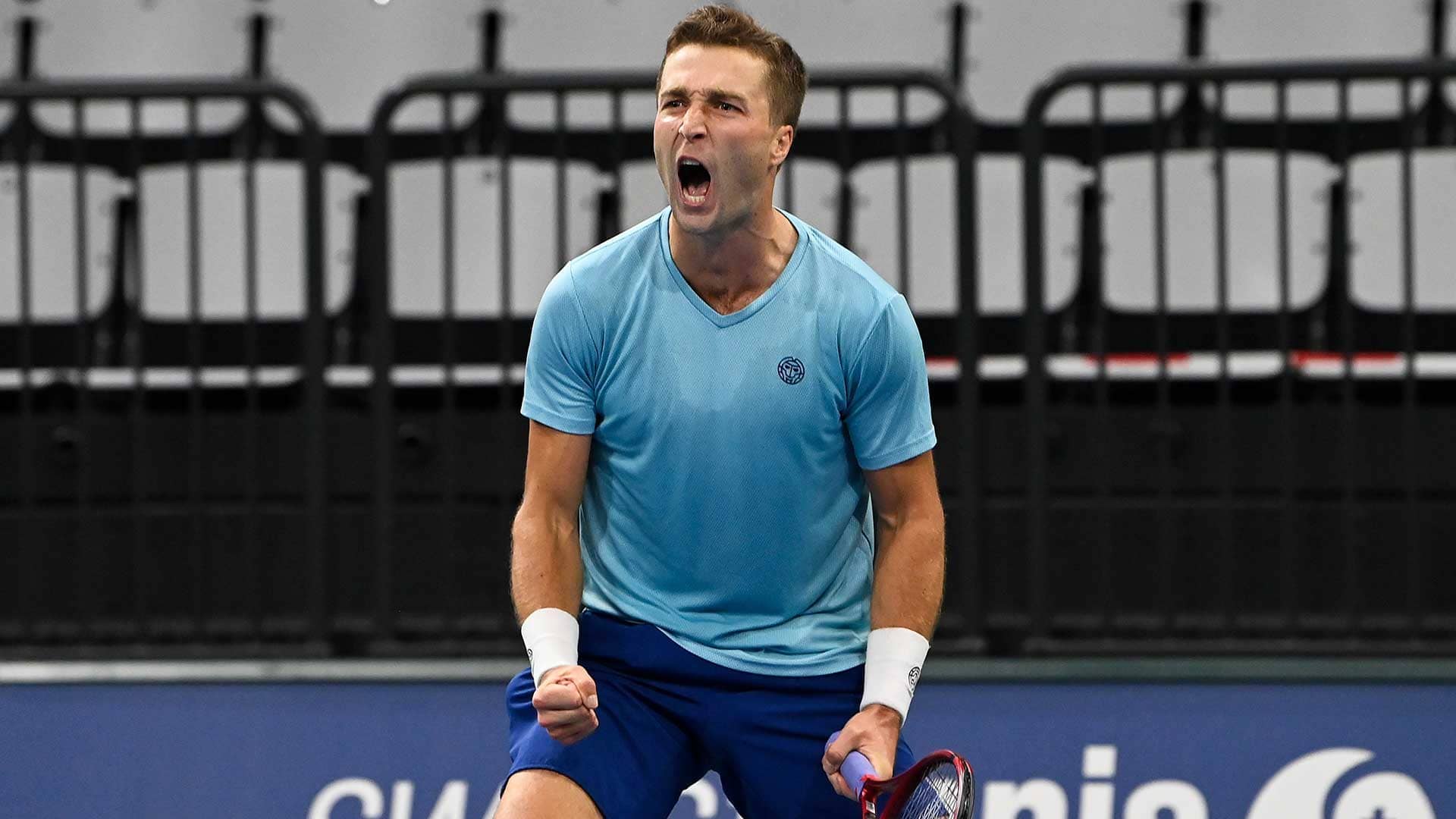 If you could go back in time to a 20-year-old Liam in 2014 - after that first final in Charlottesville - what would you tell him?
There's so much I'd like to tell a 20-year-old Liam. A lot. I'd say to try not to let the lows be so low and try not to let the highs be so high. It's tough because people said that to me at that age, if I commit now and invest in myself then I'll see it in the future. But it's one thing for someone to tell you and another to believe it yourself. I would say to myself that the stuff off the court is really important and if you put in the work there you'll do better on the court. So do it. But you know what, I probably wouldn't have listened to myself back then.

When you get home tomorrow, how will you celebrate?
I get in to Manchester tomorrow at 10 in the morning. My mom is going to pick me up and we'll go for a coffee. I need to take her out for her birthday dinner, so we might do that on Tuesday. I might go out for a glass of wine or a beer or something. That would be quite nice.