Darren Cahill pays tribute to Lleyton Hewitt ahead of his induction into the International Tennis Hall of Fame.

Cahill: Hewitt's Journey From 'Little Mongrel' To Hall Of Famer

There are days when you just know.

It doesn’t happen often and to be perfectly honest, most of the time it is an educated guess when predicting the future of an athlete.

It was the early '90s in Adelaide, Australia. I’d heard the whispers and chatter. It had started bouncing around tennis circles like a boom-boom Boris Becker serve. A young, skinny blond upstart who came from an elite sporting family was causing quite the stir with his level of play and unique desire to win that not everyone was completely fond of.

His name was Lleyton Hewitt. He was 12 years old.

My doorbell rang and I was expecting him. I knew of his parents Glynn (AFL football) and Cherilyn (Netball), but it was a first meeting, and it left a lasting impression that has stayed entrenched through the years.

There was Lleyton. Steely eyed and focused. He looked small for his age, and he was. Dressed in Agassi Nike clothing from head to toe, cap on backwards, zinc across his snozza, and carrying a Prince racquet bag over his shoulders full of frames.

“Hi, I’m Lleyton, are we going to play?” was the reply with a firm handshake.

To be honest, it wasn’t really a reply but more like a demand. I didn’t care though. Already at this point, I was amused, intrigued and intimidated all at the same time.

I was 28 years old and had just retired from the tour because of knee issues. But playing a 12-year-old kid was no problem. As it turned out, that was a slight miscalculation on my part.

We warmed up and I was amazed at his beautiful technique from the ground. Even his net game was solid and considerable work had been done to give him a strong foundation. That work had been done by one of SA’s best coaches, Peter Smith.

After 15 minutes I asked Lleyton what he’d like to do, and he replied “Let’s play sets”.

Perfect. Time to teach this little mongrel a bit of a lesson.

The first two sets went by without drama as a kick serve from a 188cm former pro was proving a little difficult for the talking garden gnome to handle. But something unusual started to happen.

You May Also Like: Quiz: Lleyton Hewitt's Hall Of Fame Career

His dad, who had stuck around to watch, went to offer a little advice to his charge, and Lleyton stopped him in his tracks and said “Zip it Glynny boy, I’ve got this”.

Like a velociraptor, he had started to work me out and probe for weaknesses. He stood in on my serve and took it early. He started to serve to my forehand, which I hated. And instead of allowing me to come to net on my terms, he dragged me in on junk balls and then proceeded to backhand topspin lob me to death. With every winner that came from little Hewitt’s racquet you could hear that now trademark war cry of, “C’monnnn” at least five streets away.

After the practice I walked back into my house and my wife, who was my girlfriend at the time, had been watching and smiling. The first thing she said to me was, “What do you think of that kid?”

I said, “Damn, this kid is good. He’s going to be something special”

This was a rare day when you just know.

Two years later when Lleyton was 15, I took him and two other Australian juniors to Switzerland to compete in the Junior Davis Cup, a prestigious event where all the best juniors came to represent their home nations.

There was another 15-year-old competing and representing Switzerland. His name was Roger Federer.

I knew Roger because my best mate, Peter Carter — who was based in Basel coaching and playing club tennis for TC Old Boys — had introduced me to Roger 12 months earlier and asked me to watch him practice.

I watched him. I was impressed, but not mind-blown impressed. Clearly a bad scouting day for me.

But now 12 months on and up walks Roger & Peter all dressed in their red and white (Swiss) tracksuits. Roger had grown and was now a gangly little man where Lleyton was still wearing shorts three sizes too big for him. Australia has drawn Switzerland in the first tie, and it’ll be Lleyton Hewitt vs Roger Federer in the first rubber. Peter was grinning like he had just stolen another one of my girlfriends (true story), but now I’m nervous that I’ve misread how good Lleyton is, and we are going to get sat on our backsides.

Lleyton didn’t let me down. The match was simply epic. 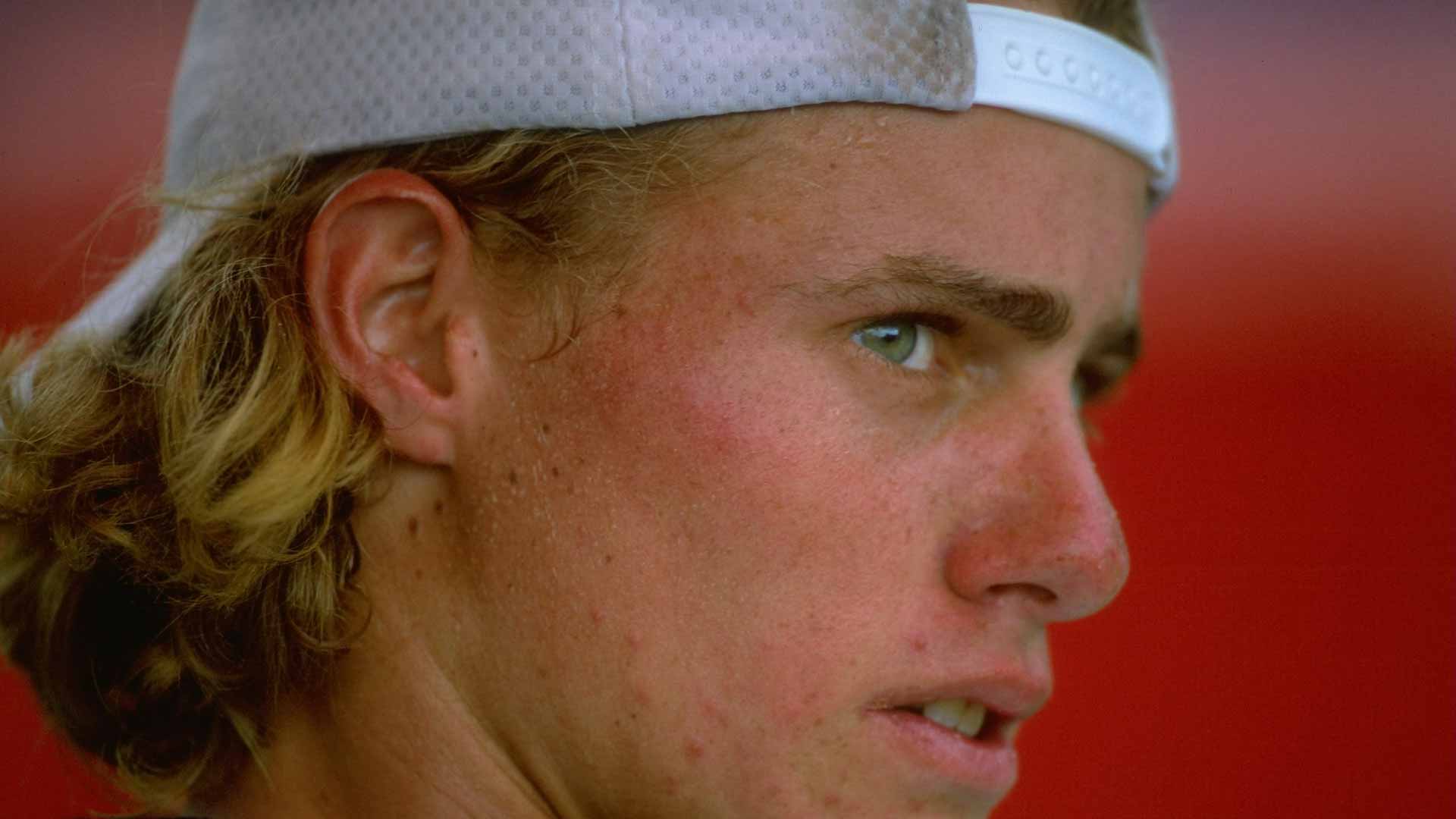 It takes many qualities to be an elite athlete and not everyone is blessed with great speed, strength, or height, but there are certain qualities that are non-negotiable to be a great champion.

They are work ethic, belief, resilience and purpose. They all matter and you need them all. This is what separates the great players from the good.

All these qualities, plus a little luck, were called upon during Lleyton’s run to his first major title at the US Open. He endured maybe his most challenging professional moments early in the tournament, which ended up defining him later in the event, and for the rest of his career. He matured. The man playing in the second week was not the same man who started the tournament.

When Lleyton swaggered on court for his semi-final clash against Yevgeny Kafelnikov, the stars had lined up for him to deliver his most comprehensive performance on the biggest stage to send the two-time major winner packing in straight sets. Y-Man left the court shattered.

Lleyton left the court to prepare for his first major final against the great Pete Sampras.

The morning of the final, Lleyton was surprisingly calm. He was given a sighter as to what to expect as they had played in the semi-finals at the US Open the previous year. Pete won in straight sets, but it was close.

Today, Lleyton was different. He was excited, not nervous. You could hear the 23,000 strong crowd getting rowdy nearing game time. The New York crowd doing its best to be heard through the corridors and locker rooms. He wanted a full Arthur Ashe Stadium and he wanted it to be an American on the other side of the court. He knew he’d have very little crowd support, but that’s just the way he liked it. As I said, Lleyton was different.

The players were called to enter the court, Lleyton’s cage was swung open, and the tiger was let loose onto Ashe Stadium.

I was sitting next to Australia’s Davis Cup Captain John Fitzgerald for the final, and all he kept saying was, “Oh my God, this is incredible. I can’t believe he is actually going to win this”. We were both in awe of the young man. 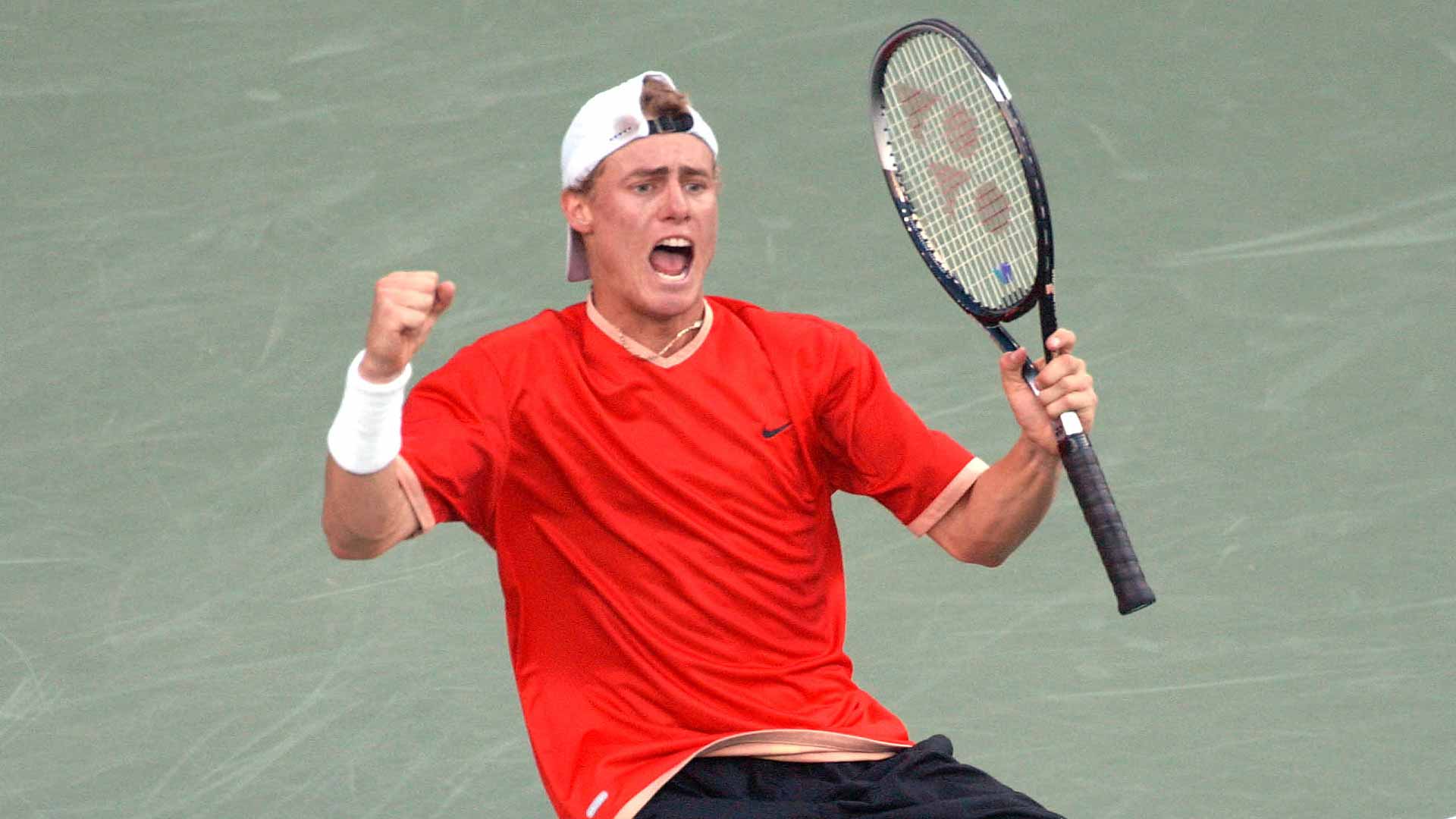 Photo Credit: Matthew Stockman/Allsport
Just a few months later he became the youngest player in history to reach World No.1, and finished 2001 with victory at the Nitto ATP Finals, capturing the year-end No.1 ranking.

Lleyton’s DNA was different to most. He took an individual sport and turned his matches into a team sport environment, pulling on his Aussie Rules background to rally the people around him like team-mates. There was nothing solo about his performances and he wasn’t scared to get involved in a scrap. Maybe there’s a hint of Connors, McEnroe and Nastase in him, but there's also a lot of Newcombe, Laver, Emerson and Rosewall flowing through his veins. That true Aussie spirit with a hint of mischief just to stir things up.

When it came to Davis Cup and representing his country, that’s where he truly defined himself and his character. In his eyes, there was no greater honour and he played with his heart and soul every single time he donned the green and gold. Many years, he sacrificed his personal ranking and income to prioritise Davis Cup in his schedule. His Davis Cup record speaks for itself, and Australia’s next generation is fortunate that he continues to give back to the game by continuing as our Australian captain.

Lleyton etched out a remarkable career. He got unlucky with several injuries in his mid 20s that halted adding to his resume and going head-to-head with two all-time greats in Roger Federer and Rafael Nadal in their prime made it challenging.

Regardless, he will always be able to look back on his career and be proud with no regrets. As Lleyton would often say, “I left it all out there, mate”. Yes, you did young fella. And more.

Most importantly, Lleyton left an important legacy in competing for Australia and setting a standard of training and competition that every generation should look up to. He’s a role model for believing in the impossible, and then making the impossible a reality. He left nothing to chance and loved every single second of his journey. He had purpose, he bounced back through resilience, he oozed belief and he had an unmatched work ethic. And yeah, he had the heart of a lion and the mind of a velociraptor.

His reward? A well-earned induction into the International Tennis Hall of Fame