Novak Djokovic celebrates beating Roger Federer 13-12(3) in the deciding set of the 2019 final at The Championships, Wimbledon.

Djokovic Beats Federer: How The Wimbledon 2019 Final Was Won

World No. 1 Novak Djokovic captured his fifth crown at The Championships, Wimbledon, on Sunday with a thrilling 7-6(5), 1-6, 7-6(4), 4-6, 13-12(3) victory over second seed Roger Federer, the eight-time former titlist from Switzerland, in four hours and 55 minutes on Centre Court. Federer had two championship points at 8-7, 40/15 on serve, in the fifth set that lasted two hours and two minutes.

It was the third major championship match that Djokovic saved two match points to beat Federer (also 2010 US Open semi-finals and 2011 US Open semi-finals). It was the first time since the 1948 Wimbledon final — American Robert Falkenburg beat John Bromwich of Australia 7-5, 0-6, 6-2, 3-6, 7-5, after being three match points down — that a player had been championship points down and won.

You May Also Like: Flashback: Djokovic Saves Two MP To Beat Federer In Historic Wimbledon Final

The 32-year-old Serbian, who saved one set point at 4-5 in the third set with a service winner en route to extending his FedEx ATP Head2Head record to 26-22 against Federer, has now won 16 Grand Slam singles championship trophies, with only Rafael Nadal (18) and Federer (20) ahead of him in the all-time title leaders list.

Federer had been hoping to become only the second player — after Stan Wawrinka at the 2014 Australian Open — to beat Nadal and Djokovic at the same major championship. The 37-year-old beat Nadal in four sets in the semi-finals.

Djokovic becomes the second singles player (after Nadal) to qualify for the 2019 Nitto ATP Finals, to be held at The O2 in London from 10-17 November. Buy Your Tickets

ATPTour.com breaks down how the 2019 Wimbledon singles final was won.

FIRST SET
Federer made a lot of the early running, aggressive on his backhand return and using his slice to force Djokovic to hit up and come to the net. In the first significant opportunity in the final, the Serbian recovered from 0/30 at 4-5, with two big serves and a backhand winner down the line. Djokovic gained an early advantage in the tie-break, but Federer worked his way back to a 5/3 lead. However, four forehand errors in the tie-break cost the Swiss, who was caught off balance on the run. Djokovic, who completed the 59-minute opener when Federer struck a backhand wide, at one point struggled to make inroads on his second serve (dipping as low at 42 per cent), but won seven of 10 points at the net and tightened up his game to commit only six unforced errors. Federer, who was aggressive from the first game, playing on the baseline, hit 21 winners and 14 unreturned serves.

SECOND SET
Djokovic’s intensity dropped and Federer ran through the first four games of the second set — Djokovic first over-hitting a forehand wide in the opening game and Federer striking through a forehand to win the third game. Djokovic, who hit a double fault (his third of the match) to gift Federer a third service break in the seventh game, won just six of his service points, while his Swiss opponent was perfect on first service (9/9) and at the net (4/4). 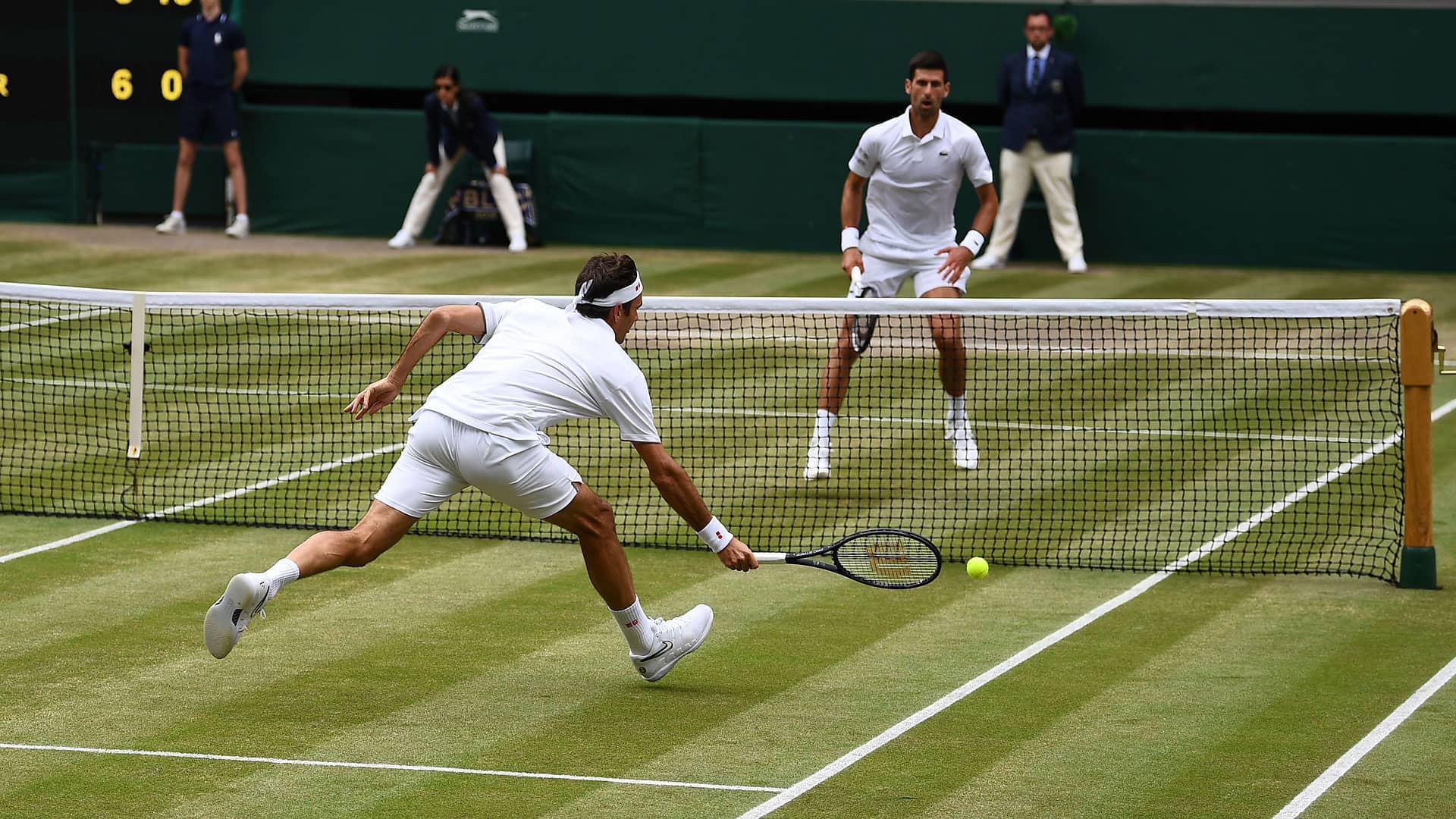 THIRD SET
Djokovic came through a fascinating 15 minutes unscathed, proving to be switched on at the start of the third set. Federer’s variation in service placement kept Djokovic guessing, but the world’s best returner started to zone in and, at 4-4, he won two of the first three points. Federer got out of trouble and put the pressure back on Djokovic with a sensational low backhand volley winner off his feet at 5-4, with Djokovic serving at 30/30. Djokovic found the line with a serve on Federer’s set point chance and the intensity increased, highlighted by a 26-stroke rally to open that 12th game that ended with Federer striking a backhand winner down the line. From that moment on, Djokovic won the next seven points and took a 3-0 lead in the tie-break. The set ended when Djokovic got Federer on the run. Federer lost just three of his first-service points and hit 13 winners — four more than Djokovic — but unforced errors in the tie-break cost the Swiss.

FOURTH SET
Federer, as he did regularly against Nadal in the semi-finals on Friday, began to attack anything shorty to rush Djokovic, who lost his serve at 2-2 when the Serbian hooked a backhand wide. Now stepping inside the baseline on backhand returns, Federer broke serve for a second time and a 5-2 advantage when Djokovic over-hit a backhand long. Djokovic regrouped and dug deep in the next game, breaking serve for the first time on his second break point chance, when a tired-looking Federer hit a slice backhand into the net. Perhaps, a hangover, as a result of saving the first break point with a backhand winner to end a 35-stroke rally. Djokovic soon closed the gap to 4-5, but Federer’s serve held up and he finished with a drive volley forehand winner — his 14th.

FIFTH SET
Djokovic began to engage with his team and the Centre Court crowd, but could not convert three break point opportunities at 2-2 in the fifth set – the first by hitting a backhand return long off a Federer second serve. Djokovic made his move at 3-2 in a high-quality passage of play, winning the first three of the first four points on Federer’s serve, courtesy of deep backhand returns. His backhand did the damage once more, when it forced Federer to approach the net, resulting in a winning pass for a 4-2 advantage. But Federer reverted to his aggressive tactics of the first set, using his backhand slice to manoeuvre Djokovic around the court, resulting in a forehand error from the World No. 1. At 4-4, with Federer serving at 15/30, Djokovic had an open court and the chance to set up two break points, but he struck a forehand down the line that hit the net cord and landed wide. A double fault at 5-5, 15/15, left Djokovic feeling anxious, and a dive volley forehand helped the Serbian to the next point and later maintain his game advantage in the decider.

Into the 15th game, Federer began to cut down on his groundstroke pace and rally with Djokovic and draw out the error. Djokovic’s forehand broke down at 7-7 and, on break point, Federer ripped a forehand crosscourt winner to seal an 8-7 lead. Moments later, his serve got him to 40/15 — two championship points — but Djokovic was not finished yet. Federer mis-timed a forehand wide on the first point, then Djokovic produced a forehand crosscourt winner at 40/30 and went on to break. The Serbian then held to lead once again.

As the first men’s singles match of The Championships edged closer to a deciding set at 12-12 in the fifth set, Djokovic was relieved to get out of dangerous in the 23rd game. Having led 40/0, he let slip four straight points, but battled to save one break point with an approach to the net that forced Federer to hit a backhand slice wide. Timely first serves paid dividends, in addition to a high volley winner on a second break point, as the pressure shifted once again to Federer.

A volley error by Federer on the third point of the tie-break handed Djokovic the early advantage and he held his nerve to join Sweden’s Bjorn Borg and Great Britain’s Laurence Doherty as a five-time Wimbledon champion.

Read Feature: Before Isner/Mahut 78/68 There Was Gonzales and Pasarell 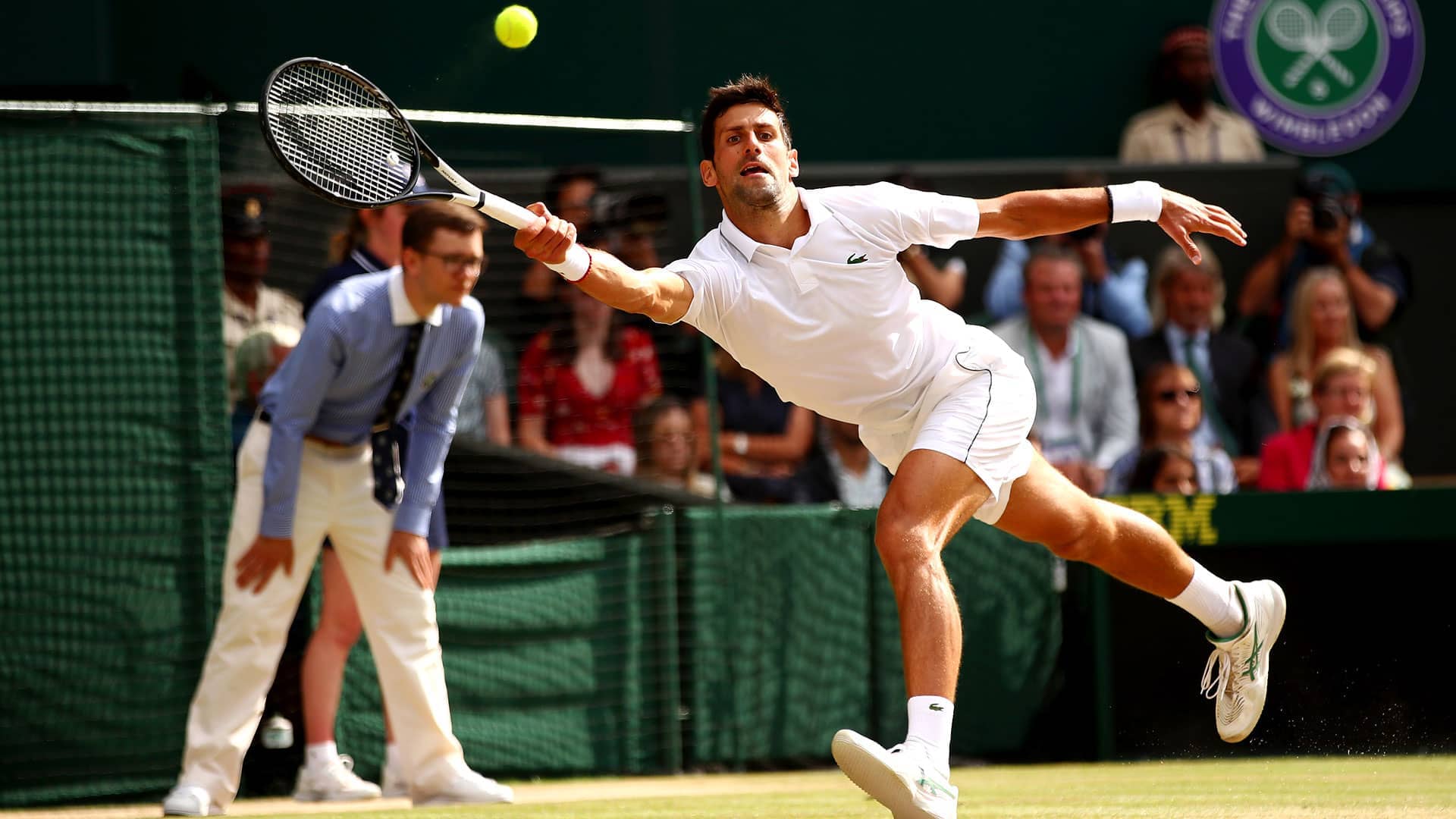