Daniel Evans will play Matteo Berrettini in the first round at The Queen's Club on Tuesday.

The past few years have been filled with success for Daniel Evans. The Briton defeated Dominic Thiem to earn his first Top 10 win in 2017, captured his maiden ATP Tour title in Sydney in 2021 and then rose to a career-high No. 22 in the Pepperstone ATP Rankings last September.

However, the path to the top has been anything but easy. With five of the Top 10 aged 25 or younger, many players are achieving their dreams at a young age. However, it was a different story for Evans, who only cracked the Top 100 for the first time when he was aged 25 in 2016, before he dropped outside of the Top 1000 in April 2018.

Now aged 32, Evans has found greater consistency, becoming a fixture of the Top 50 since 2019. The World No. 31 puts his improvement down to hard work and admires his fellow professionals who have done the same.

“I think you get to an age when you need to put the work in and try and fulfil what you think you have got,” Evans told ATPTour.com. “It comes hand in hand when you start working a bit harder, you get more success and you start to realise this is the right time to go after it.

“There are a lot of sacrifices being away from home, being away from family. I admire everyone who is out on the Tour putting the work in. Everyone who puts themselves on the line in front of a crowd to go out and perform and lose and then come back and do it all again. It is not easy.”

The work Evans puts in is there for all to see when he is on court. The 32-year-old possesses great tenacity when on court, scampering around the baseline to hang in points, frustrating opponents with his effective backhand slice.

Fighting hard and playing in electric atmospheres are aspects of the sport Evans loves the most. He smiles while reflecting on a recent match in Madrid, where he felt like he was facing both Spaniard Roberto Bautista Agut and the home crowd at the same time.

“The match against Bautista Agut in Madrid was one of the highlights of the year," Evans said. "It was against him, who I really like, and we had a really good hard battle and I managed to get on top of it. The atmosphere in the arena was amazing.

"I do a good job of appreciating what is happening in moments. Win or loss, it is something pretty special to be involved in when competing in electric atmospheres. For example in Spain, playing a Spaniard in Spain in a full house going crazy for him is pretty cool. If you don’t appreciate it, you miss out on an experience.”

Evans, who beat Bautista Agut en route to the third round in Madrid in May, is competing on home soil this week at the Cinch Championships in London. The Briton will play reigning champion Matteo Berrettini in the first round on Tuesday and arrives in form after triumphing at an ATP Challenger Tour event in Nottingham last week. 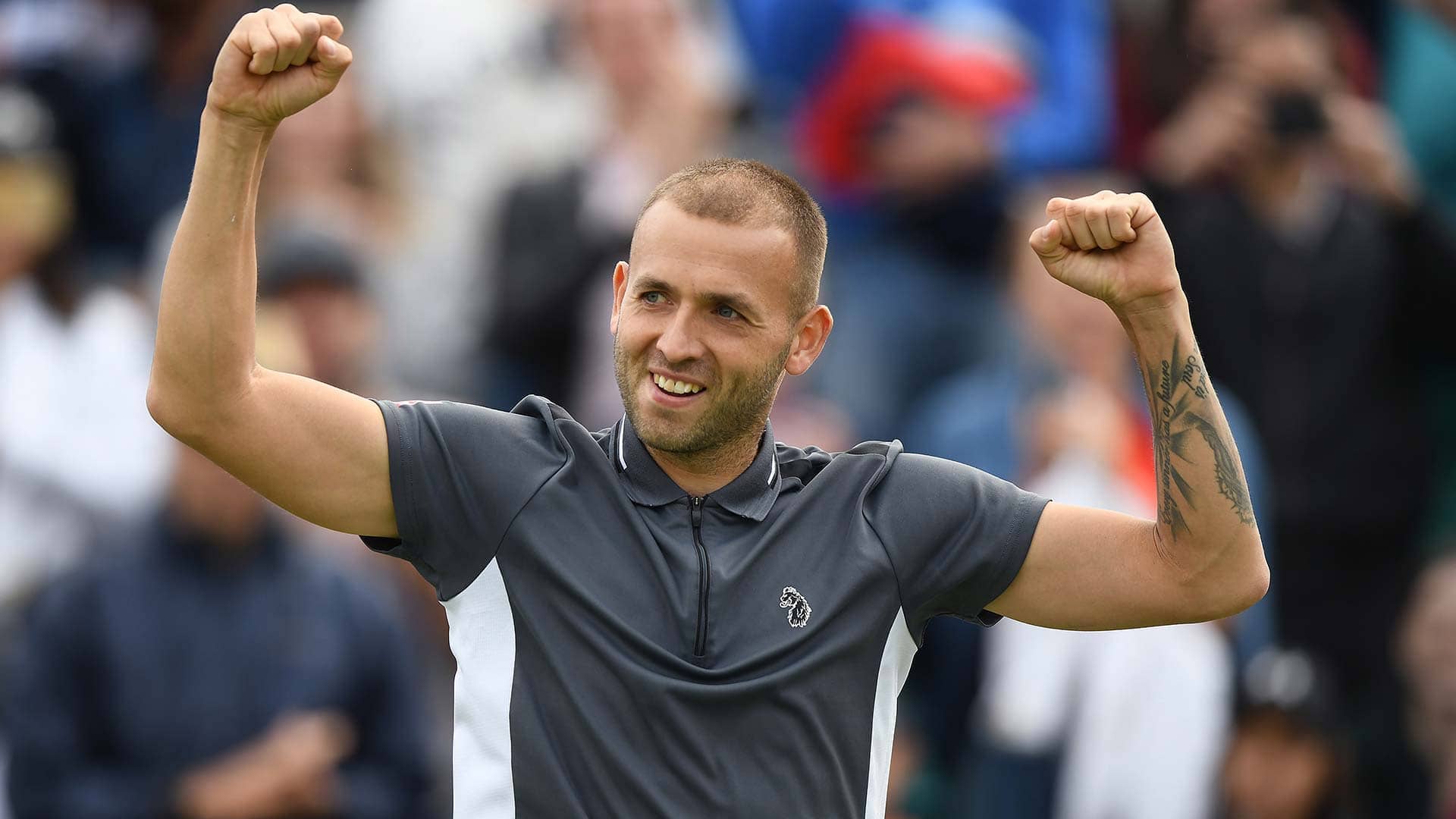 Photo Credit: Nathan Stirk/Getty Images for LTA
The 32-year-old is excited to be back on the grass and is looking forward to having the crowd behind him at the ATP 500 event in a period of the season he loves.

"It was really nice to win in my home country last week. It is a great time of year where we get treated really well with amazing tournaments,” Evans said when discussing the grass swing. “When I think about the grass, the tradition comes to mind. It is an amazing surface to play on. Some of the most iconic matches have been on the grass, so it is great.”

You May Also Like: First-Time Winner Spotlight: Daniel Evans

Playing on the English lawns has often led to success for Evans. The Briton reached the quarter-finals at The Queen’s Club and has won five titles on the surface across all levels.

Competing in the UK also comes with the perks of spending time with friends at home, providing a good opportunity to switch off when not on court.

“I play a lot of golf when I am back in England,” Evans said. “I have a handicap of three and there is a good group of us who like to go out and play. I haven’t played with Casper [Ruud] before but he owes me a round because I beat him in practice.

“Then with food in England, my go-to would actually be a decent Italian. Caprese and bruschetta, so I would have two starters. And then Spaghetti Bolognese and if I have a week off I love a Chinese.”

Evans will hope that home comforts can help lead to success on court over the next month, with the Briton ready for an action-packed period as he competes at The Queen’s Club, in Eastbourne and then Wimbledon.