Roger Federer defeats Nick Kyrgios in three sets, winning 85 per cent of first-serve points to advance to the MercedesCup final.

Roger That: Federer Guarantees Return To No. 1

Top seed Roger Federer defeated No. 4 seed Nick Kyrgios 6-7(2), 6-2, 7-6(5) on Saturday in the MercedesCup semi-finals, guaranteeing that he will return to the top of the ATP Rankings on Monday.

"I'm very happy, very relieved. I thought it was a tough match [like] I expected against Nick. We've played so many breakers already, I'm losing count," Federer said. "It was close. It could have gone either way, naturally. But I'm happy I got it and get back to World No. 1 next Monday, so it's very exciting. And I've got another final, so it's great news."

It is the Swiss’ first tournament in 11 weeks, going back to the Miami Open presented by Itau. A year ago, Federer lost in his opening-round match in Stuttgart after opting not to play during the clay-court season. But this time around, he is into the final. The 36-year-old arrived this week with a 2-2 record at the tournament.

Trailing Rafael Nadal by 100 points entering the week, Federer needed to reach at least the championship match to ensure he will climb to World No. 1 on 18 June. Otherwise, he would not have had  another opportunity to do so on the mown lawns, having won titles in Halle and Wimbledon last year. That means that Federer cannot gain any more points during the grass-court season after this week.

In February, Federer returned to World No. 1 for the first time since 4 November 2012, which is the longest gap between a player's stints atop the ATP Rankings. Federer, held the top spots for six weeks and then took it back from Nadal for one more week beginning on 14 May.

On Sunday, Federer will face a familiar foe in Milos Raonic as he attempts to lift his 98th tour-level trophy. The 36-year-old leads the Canadian 10-3 in their FedEx ATP Head2Head series, which includes a 3-1 edge on grass.

It looked like the Swiss' hopes were slipping away when Kyrgios hit a rocket-like crosscourt forehand passing shot to gain a mini-break lead in the final-set tie-break. But Federer was the steadier player, shoveling a short backhand past Kyrgios on his first match point to clinch the victory after one hour, 52 minutes and earn a chance to play for his 18th grass-court title.

This was the pair's third FedEx ATP Head2Head meeting, with their series tied at 1-1 entering the match. Interestingly, their first six sets all went to tie-breaks. So it was no surprise that the first set on Saturday went to a seventh consecutive tie-break. Kyrgios, who saved the only two break points of the set, earned a mini-break lead for 3/1, dictating play with a series of down-the-line backhands before aggressively taking a final backhand crosscourt that the Swiss could not handle. The Aussie did not look back from there, confidently closing out the opener.

But as well as Kyrgios served under pressure in the first set, it proved his undoing in the second. The Australian went for two big second serves at 1-1, hitting back-to-back double faults to concede an early break. His frustration from that slip-up showed, as Kyrgios whipped an inside-out forehand from his back foot into the net to give Federer a second break.

But Kyrgios regrouped, and the decider was tight throughout. Neither player faced a break point, with the pair playing their eighth tie-break. And while Kyrgios hit two massive serves in the opening-set tie-break to consolidate his mini-break, Federer did not allow Kyrgios to widen his lead in the final-set tie-break. With the Aussie leading 3/1, Federer pinned him back with a deep return, before forcing an error with a heavy forehand approach shot to the backhand. 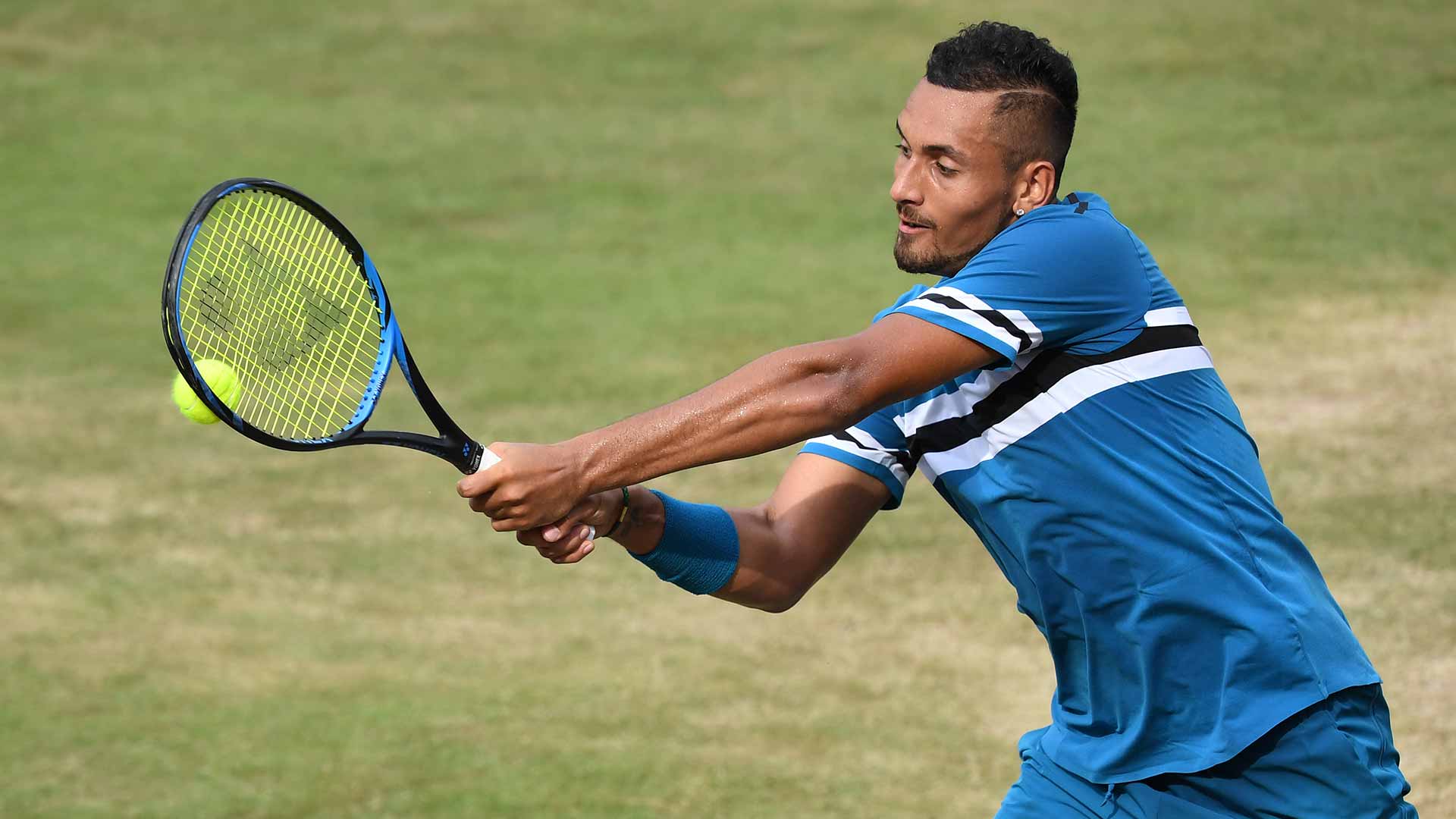 It was a strong effort by Kyrgios, who showed little rust in his first singles tournament in two months, as the 23-year-old has been recovering from a right elbow injury. Earlier this year, the Canberran won his fourth ATP World Tour title at the Brisbane International presented by Suncorp, his first triumph in Australia. In May, he captured his maiden tour-level doubles title alongside Jack Sock at the Open Parc Auvergne-Rhône-Alpes Lyon.

Did You Know?
Roger Federer and Milos Raonic have met at Wimbledon in each of the past two years. Federer won last year en route to the title, while Raonic triumphed in 2016 to reach his maiden Grand Slam final.