Roger Federer has reached the final ten times at the Nitto ATP Finals, a tournament record.

Dave Seminara
This article contains:
The winner of record 59 matches and six titles on three different continents, Roger Federer is THE legend of the season finale.

If you ask tennis fans and historians what’s been most impressive about Roger Federer’s career, you’ll invariably hear a litany of his best-known achievements and records. 20 majors. Career Grand Slam. 23 consecutive major semi-final appearances. 310 weeks at World No. 1, including being the oldest No. 1 (at 36 years, 320 days). 103 ATP titles. 1,242 wins.

Among those gaudy feats is the fact that he’s also been the undisputed king and heavyweight champion of the sport’s most difficult tournament to qualify for: the Nitto ATP Finals.

The Maestro from Münchenstein has mastered the event that used to be called The Masters, qualifying for the elite event an astonishing 14 times in a row from 2002-2015. He’s won the title six times, and has reached the final 10 times, both tournament records. And he’s excelled while facing the world’s best, compiling a 59-17 record while playing in the event 17 times in three countries.

Simply put, the Nitto ATP Finals has often been the cherry on top of some of Federer’s finest seasons, the final exam he aces before going off on holiday. In a recent Zoom call he joined from his home in Switzerland with tennis legends Bjorn Borg and Tim Henman, Federer spoke of how important the event has been to him throughout his career.

“Honestly it doesn’t matter where it (the event) moves, any player will go where it goes,” said Federer, 39, who was in great spirits on the call. “I would go to the moon if I could.”

Let’s go way back in time to a galaxy far, far away when Roger Federer wasn’t a household name yet. In 2003, when he won what was then called the Tennis Masters Cup outdoors in Houston, he wasn’t yet a fan favourite. He had won Wimbledon, his first major, earlier that year, but he hadn’t yet made a splash in America. He and some other players were less than thrilled that the tournament had switched to becoming an outdoor event and the Texas crowds favoured the Americans: Andy Roddick, then the top seed, and Andre Agassi, who was by then an icon.

The upstart Swiss, seeded third, beat Agassi 9-7 in a third-set tie-break in the round-robin phase, and then proceeded to obliterate David Nalbandian, Juan Carlos Ferrero, Andy Roddick and then Andre Agassi in a three-set final that took all of 88 minutes. He had followed up his Wimbledon title that year with a fourth-round loss at the US Open, so the win in Houston proved that he was no one-hit wonder.

“Qualifying for the Tennis Masters Cup (that year) was a huge deal,” Federer told Henman. “It opened my belief that I could beat the best baseline players from the baseline. 2003 was a true breakthrough tournament for me at the time.”

At the time, Federer told the press, “I don’t know if I have the potential to improve, but I’m satisfied if I can maintain this level.”

Little did we all know that he would do much more than simply maintain his level of play in the years to come. Federer’s Lone Star state triumph served as a springboard for his most remarkable year, 2004, when he won three majors and then put an exclamation mark on a phenomenal 74-6 season by repeating as champion in Houston. It was the best year anyone on the Tour had had since John McEnroe went 82-3 in 1984.

In his recent interview, when asked to reflect on his favourite Nitto ATP Tour Finals stop, he said that he and Mirka loved Houston. And why not? He won both times the event was held there and didn’t drop a set.

You May Also Like: Step Aside Boris, Sampras Owned Germany in The ‘90s

Federer’s Shanghai years, 2005-8, were just as fruitful. Rene Stauffer reports in his Federer biography, Quest for Perfection, that Federer considered the city’s newly constructed Qizhong Tennis Center, with its typhoon-proof, retractable roof that opened in the space of a blooming magnolia, lucky because it was eight tonnes and had eight retractable pieces. Federer’s lucky number is eight—he was born on August 8—but his success in the Middle Kingdom wasn’t about lucky breaks. 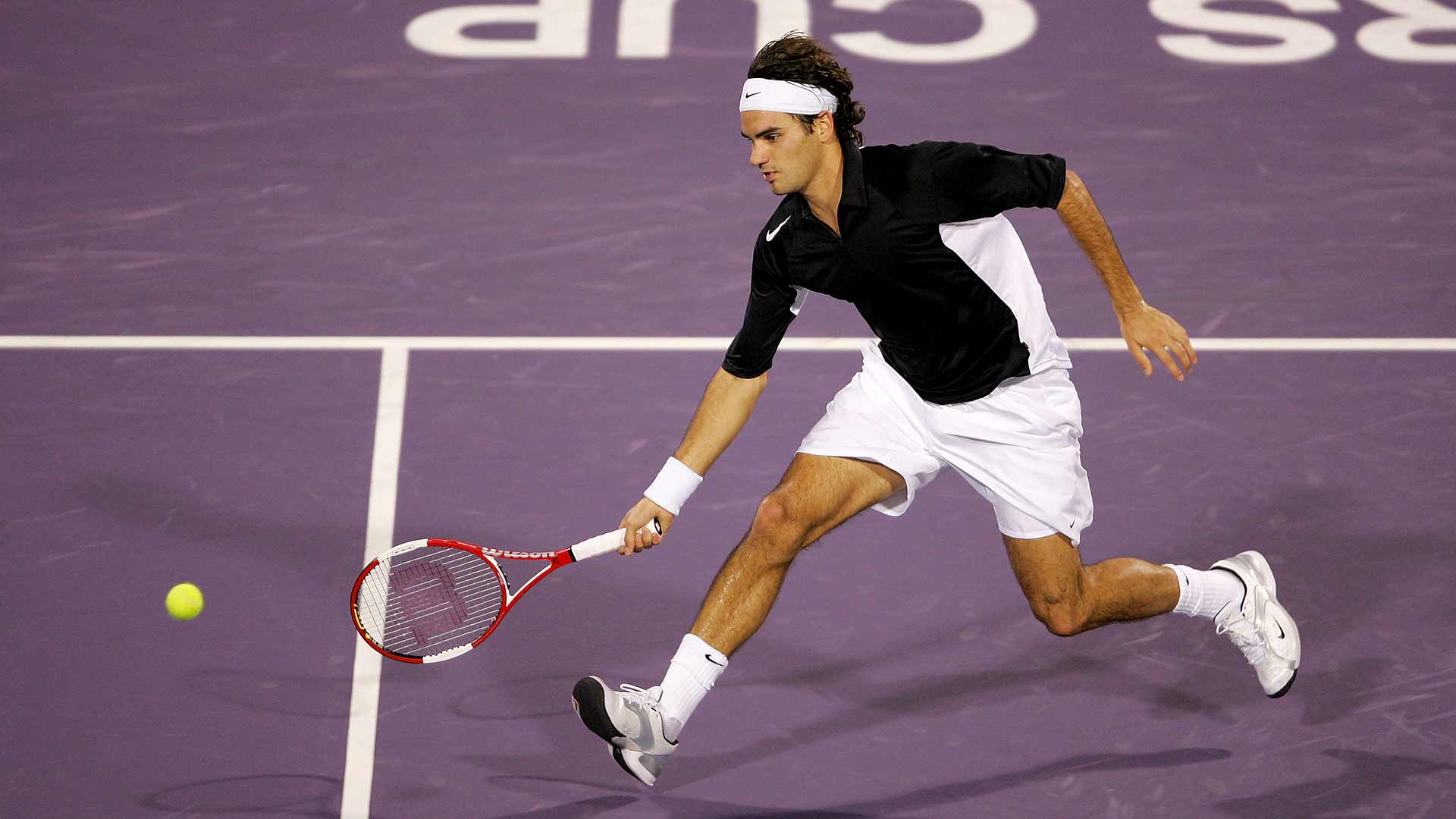 He earned two more titles in China’s so-called “Mo Du” or Magic City: 2006, when he dismantled James Blake in the final, and 2007, when he did the same to David Ferrer. He also suffered a heartbreaking five-set loss in the final to his old nemesis, David Nalbandian, in 2005.

Federer’s semi-final victory that year over Gaston Gaudio remains the only double bagel (6-0, 6-0) in tournament history, and the memory of it brought a big smile to his face on his Zoom call with Borg and Henman, though he sheepishly only mentioned it briefly before modestly concluding, “We won’t talk about that one.” (Perhaps he’s still a bit embarrassed that he provided just 50 minutes of entertainment to the fans that day?)

A year after the event moved to London’s O2 arena, Federer won the title for the fifth time in 2010, vanquishing his great rival Rafael Nadal in three sets. “There’s always pressure when I play Rafa indoors because I’m the favourite,” Federer told Henman of that match. “That changes depending on how things are going, but he’s always been a tough player for me to play against.”

Federer said that he loves the O2 arena because it’s nightclub dark, the fans are incredible and because James Bond landed on the roof of the place in the film The World is Not Enough. His win over Rafa there in 2010 remains one of his favourites. “It was a big one after being in Houston and Shanghai, to also win in London was something very special.”

The Swiss champ backed up that win with his sixth title the following year in 2011, his first campaign since 2002 when he failed to capture a major. “I don’t remember if I won slams those years (2010-11, he won one major in 2010, none in 2011), so it was a great way to finish the season,” Federer said of his final victory over Jo-Wilfried Tsonga, whom he beat three Sundays in a row. “I was extremely relieved…(the feeling was) I can’t wait for the beach, I’m exhausted.”

Dr. Federer—remember, he has an honorary PhD from the University of Basel—has qualified for the tournament eight more times since he last won it, reaching at least the final four on every occasion. During that span, his other great rival, Novak Djokovic, has upped his ATP Tour Finals title haul from one to five, beating Roger in the final of the event in 2012, 2014 and 2015. (2014 was a walkover due to a back injury.)

It’s essentially a part-time job at this point in his career for Roger to keep all of his records straight, but he’s well aware that Novak has a chance to equal his record six Nitto ATP Finals titles this year. And the fact that he won’t have a chance to square off against the Serb and the other top players in the world due to his knee injury is a great disappointment to the Swiss legend. 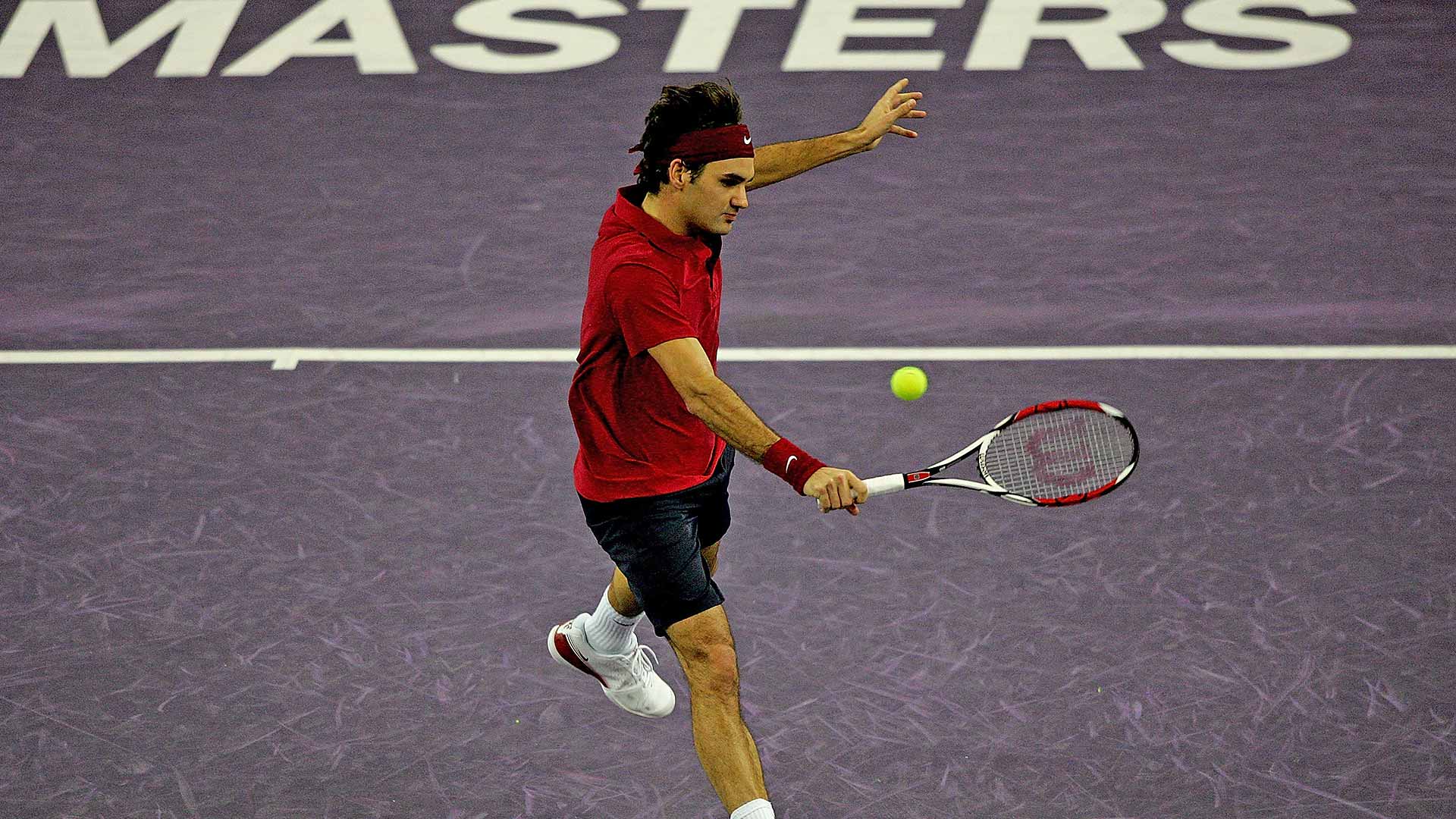 But Federer is widely regarded as the best indoor player in tennis history, so he’ll likely be one of the men to beat as the event moves to Turn in 2021. And don’t bet against him being there. He recently said that he is “definitely not” retiring anytime soon, which was exactly the sweet news tennis fans have been craving in an otherwise grim year.

Will Roger compete at the season finale as a 40-something? Ten or even five years ago, this prospect would have seemed like a stretch. But consider what’s he’s already done at this premier event compared to other legends of the sport. First, look at his winning percentage while playing against the very best. He’s at 78%, compared to 73% for Boris Becker and Bjorn Borg, 72% for Djokovic, 71% for Sampras, and 63% for John McEnroe. Among those who have won the tournament multiple times, only Nastase (88%) and Lendl (80%) have higher winning percentages at the event, but Nasty had just 22 wins at the event and Lendl 39, compared to 59 for Roger.

How difficult is it to win this tournament six times? Just ask Jimmy Connors—the man Federer is chasing for the overall match-wins record. Connors, who was ranked in the Top 10 for 789 consecutive weeks, competed in the tournament 11 times but won it just once, compiling a pedestrian record of 18-17. How about Stefan Edberg, who was one of Roger’s idols as a kid and later became his coach? The Swedish great competed in the tournament nine times but won it just once and had an 18-14-lifetime record. For his part, Andre Agassi played in the event 13 times, won it just once and came away from it all with just 22 wins and 20 losses.

And so, if you’re busy heaping praise on the great Roger Federer, don’t forget the legend’s heroics at the Nitto ATP Finals over the years, and remember that he’s likely not done yet.