Why Griekspoor Prepared For US Open (And Djokovic) On Clay

Andrew Eichenholz
This article contains:
Dutchman is in the second round of a Slam for the first time

This time last week, Dutchman Tallon Griekspoor was resigned to missing this year’s US Open because he had been unable to secure a travel visa. On Thursday, he will play World No. 1 Novak Djokovic in the second round.

The 25-year-old said he had been struggling for a visa for nine months in what he called a “terrible” dilemma. This was the first time he earned direct entry into the main draw of a major, and he was not going to be able to play.

“The answer was just, ‘No, it’s not possible.’ There were problems with the embassy in Holland [because of] Covid. There was just no time,” Griekspoor said. “Last Monday I decided, ‘Let’s go, we’re going to practise on clay.’ Tuesday and Wednesday I was practising on clay. Thursday I got an email from the USTA and they worked it out so I was good to go.”

That day, the World No. 121 rushed onto a flight and arrived in New York at 11 p.m. “It was already a win for me to be here,” he admitted. Despite the surprise trip and quick surface change, Griekspoor battled past big-hitting German Jan-Lennard Struff in five sets on Tuesday for his first main draw win at a major.

As he did this interview, the Dutchman watched his next opponent, Djokovic, play Holger Vitus Nodskov Rune on a nearby screen.

“[I respect] the way he’s been at the top for so long. Rafa and Roger were there and he just came and basically destroyed every record in the book,” Griekspoor said. “The guy has been so solid through the years, he has been so good for so long. He’s just a legend of the game. It’s going to be very tough, but very exciting as well.” 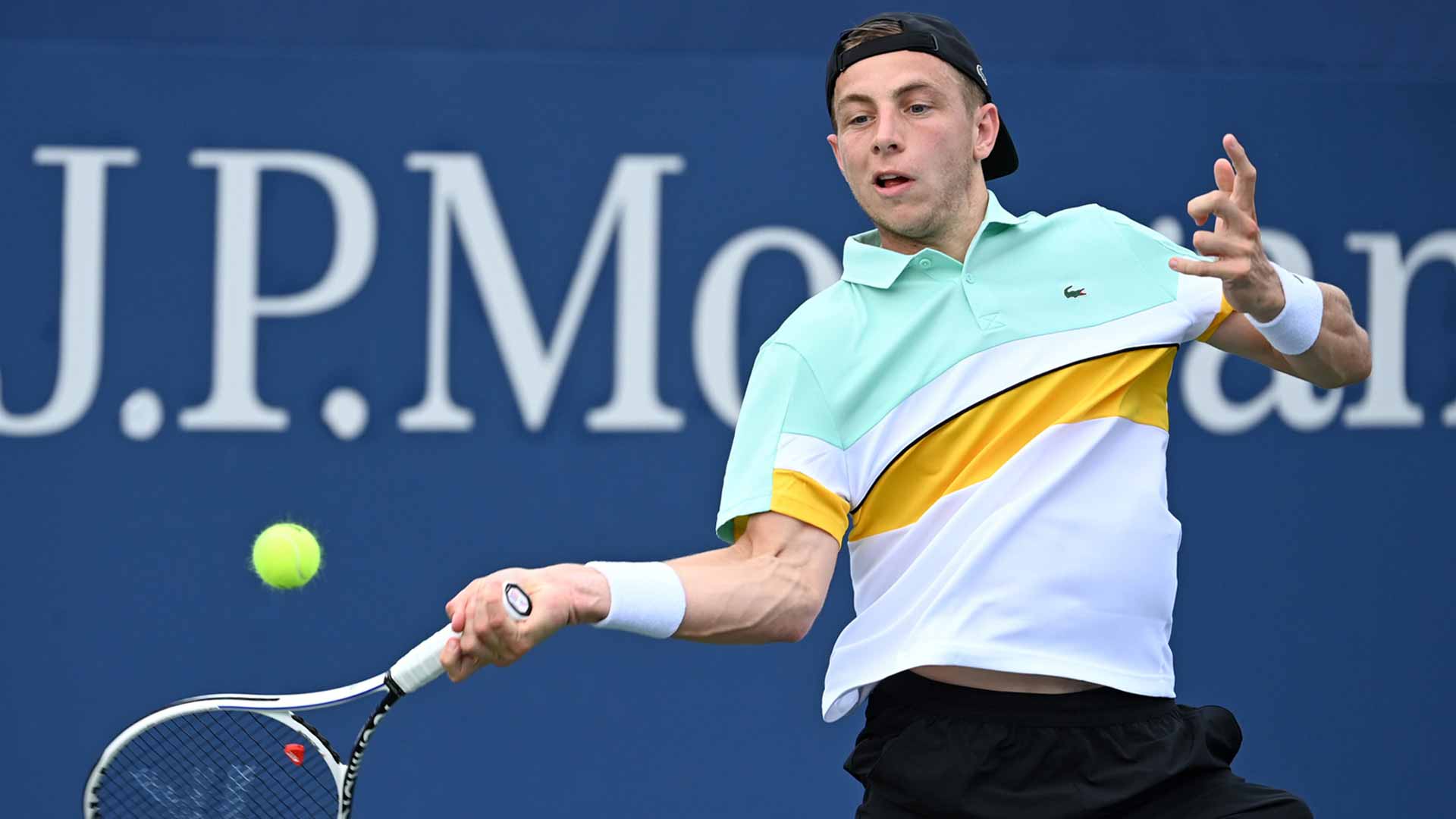 Photo Credit: Andrew Ong/USTA
Griekspoor has been working for this moment since he began playing tennis at six years old. His twin brothers Scott and Kevin, who were 12 at the time, took lessons, and Tallon would go with them.

“I was just walking around, a little kid with a racquet. That’s how it started for me. From that time I don’t remember much,” Griekspoor said. “But I remember a lot when I was starting to play in the Futures after the juniors. My brothers were also playing around in the Futures, so it was really nice to travel with them and spend time with them.”

Scott climbed to a career-high FedEx ATP Ranking of No. 205 and Kevin reached World No. 655. Both are now retired.

“They sometimes come and still follow it a lot and I actually miss them on Tour, because it was pretty cool to have them around. It’s cool to have friends around, but it’s even cooler to have your family around, especially brothers who were playing,” Griekspoor said. “I always had two guys to look up to, six years older. They were much better and stronger than me at that time, so I really enjoyed that.”

Griekspoor’s family was not just into tennis, though. Although his mother Monique is a tennis instructor, his father Ron was a motocross driver.

“I didn’t do [motocross] that much myself. I did it for fun. The other side of my family, my nephews, they’re doing it professionally. In the family it’s tennis and motocross,” Griekspoor said. “Almost every weekend when it’s on, I’m watching it. It’s just part of my youth. I grew up with it and I really, really like it.”

The 25-year-old is also a big Formula One fan, and one of his heroes is Max Verstappen. Both Formula One and motocross are exhilarating, just the way Griekspoor likes it.

You May Also Like: Tallon's Trifecta: Griekspoor Claims Third Challenger Crown Of 2021

Griekspoor has surpassed both of his brothers’ accomplishments, and this season has been his best yet. The Dutchman is in a six-way tie for the most ATP Challenger Tour titles on the circuit with three, and he climbed to a career-high World No. 105 in July.

At Wimbledon, Griekspoor qualified for the main draw for the first time, and then played Alexander Zverev in the first round on Court 1. That was a special experience for the Dutchman, who in 2018 beat former World No. 3 Stan Wawrinka in front of his home fans in Rotterdam. But he has never competed in a setting like Arthur Ashe Stadium, where he will play Djokovic on Thursday evening.

“This one is a lot bigger, so it is what it is,” Griekspoor said. “You just have to take time to get used to it and hopefully don’t be impressed too much and be ready to play my game as soon as possible.”

One week ago, Griekspoor was disappointed at home thinking he would not make the trip to Flushing Meadows. He wasn’t even practising on the same surface the season’s final major is played on. Now, he is ready for the biggest match of his life.