Russia's Aslan Karatsev has surged into the Top 30 of the FedEx ATP Rankings.

Aslan Karatsev: Clothes Do Not Maketh This Man

Paul Macpherson
This article contains:
How Russia's 'secret weapon' defied the pandemic to become one of the ATP Tour's hottest players of 2021

“Who told you that?” Aslan Karatsev says with a sheepish grin.

Sitting near the End Zone on the field of Hard Rock Stadium, home of the Miami Dolphins and this week’s Miami Open, the amiable, low-key Russian is about to detail how he came to accept some match shirts from Mischa Zverev at the Australian Open.

“I was in the locker room packing my bag after the match and Mischa just asked me if I needed some t-shirts and I said 'okay'. I also play with adidas so I took it. I had a contract with adidas five years ago so I still had plenty of clothes, but they were not the latest model. Maybe he saw that I played with the old ones."

This is not a literal rags-to-riches story – Karatsev’s old kit was still holding up – but his career, like his shirts, has definitely taken a turn for the better in the past couple of months. “I don’t really mind which model shirts I play with. But I also think Mischa probably had too much.”

Despite his rapid rise to being one of the hottest players on the planet right now, expect to see Karatsev unpaid and in adidas for the immediate future. Because apparel manufacturers typically finalise budgets and lock in endorsement deals in the fourth quarter, the Russian’s breakout in Q1 of 2021 hasn’t yet been fully rewarded.

“Since the ATP Cup and the Australian Open, we’ve had plenty of offers, but we’re waiting for a bigger offer,” says his newly signed agent Pierre Christen. “A few clothes brands have been in touch. He’ll be worth more if he finishes the year in the Top 10 or 20.

“It has been very busy over the past five weeks, but more so since he won the Dubai title last week. I think a number of people were waiting to see if he could back up his Australian Open run.”

Karatsev had a contract with Head racquets prior to the Australian Open. But the only sponsor pick-up during his dramatic run at Melbourne Park was a patch deal for French cosmetics giant Guinot and its brand Mary Cohr, ahead of his semi-final match with Novak Djokovic.

His stunning rise from World No. 253 at the beginning of the five-month Tour suspension last March to his place inside the Top 30 is the culmination of 10 years of hard work, an improved mental outlook thanks to his coach Yahor Yatsyk, time spent with his Top 10 countrymen at the ATP Cup and a slice of good luck.

Karatsev was down a break of serve in his first-round Australian Open qualifying match in Doha against Brandon Nakashima. He rallied to win that and two more qualifying matches and then had a stroke of fortune on the journey to the year’s first major.

He was originally booked on a charter flight from Doha to Melbourne on which passengers tested positive. Had he been on the original flight, he would have faced a two-week hard lockdown in his hotel room instead of being able to get two weeks of practice with India’s Sumit Nagal.

"I got the 'healthy' flight,” Karatsev said. “I was supposed to be on the covid [affected] flight but they made a mistake. There were a few players who were put onto the 5am flight and that was the one without covid. I was lucky. Everything started from there.” 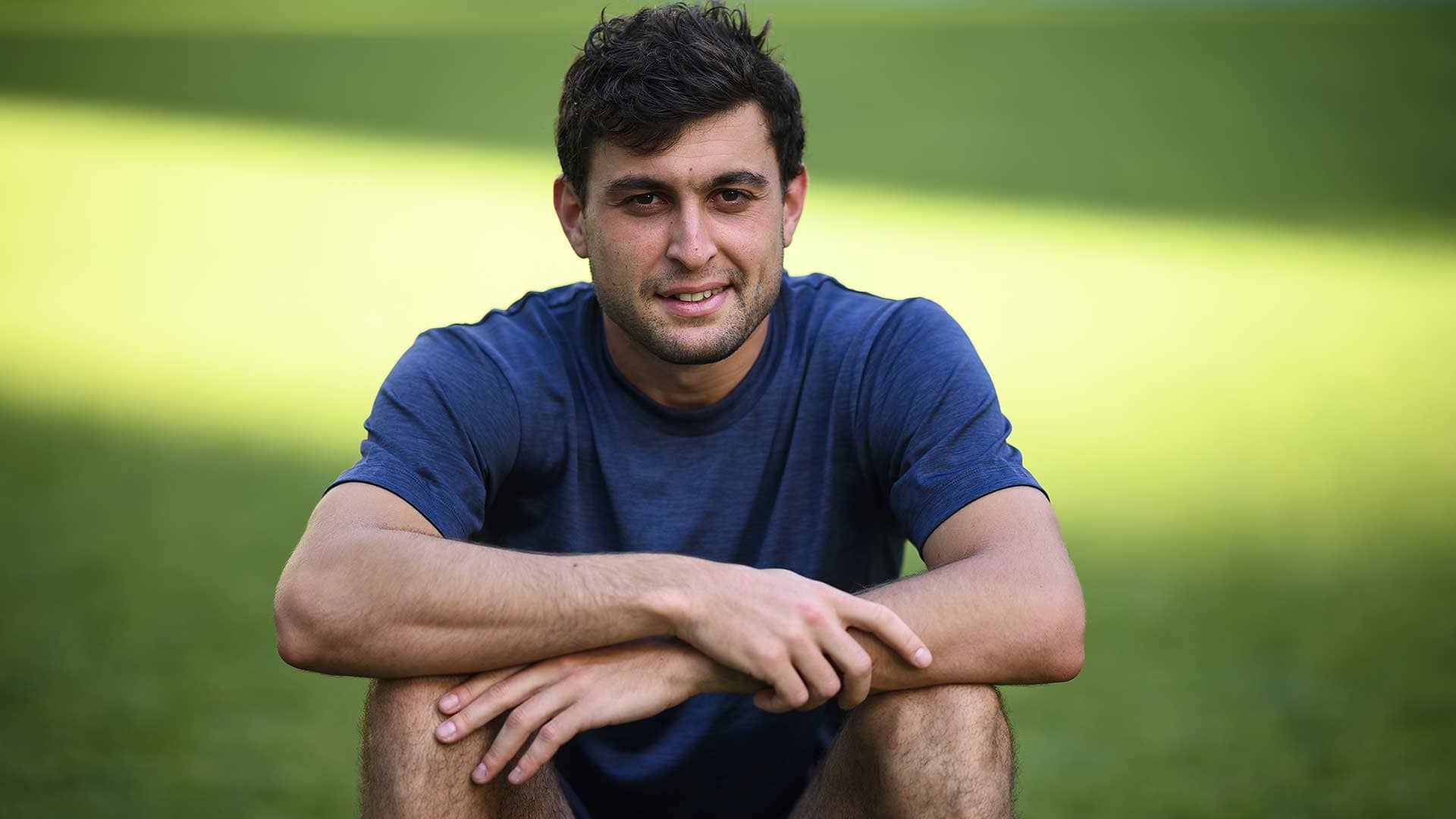 The mainstream tennis world first got to know Karatsev during Russia’s run to the ATP Cup title. Top 10 teammates Daniil Medvedev and Andrey Rublev understandably commanded most attention for their unbeaten singles runs, but Karatsev played three doubles matches and was dubbed the team’s ‘secret weapon’ by Medvedev.

Karatsev partially credits his ATP Cup experience to his semi-final run at the Australian Open, which included a comeback from two sets down against Felix Auger-Aliassime in the fourth round.

“Being part of ATP Cup gave me confidence to play on a big stage. When the Australian Open started I was nervous in the first round, but after that it became smoother. I felt the game, I felt the shots. Against Felix I was two sets down. That was a tough moment. They asked me in press if I gave myself some talk when I went to the toilet. The answer was 'I just went to the toilet’. They had fun with that on social media.”

Karatsev also accounted for former World No. 3 Grigor Dimitrov in the quarter-finals, before being stopped by eventual champion Djokovic.

That run earned him wild cards into Doha, where he pushed World No. 4 Dominic Thiem to three sets in the second round, and Dubai, where he charged to victory at the ATP 500. Three-set victories over Jannik Sinner in the quarter-finals and Rublev in the semi-finals stood out, especially the latter win over his countryman.

Rublev, who says he plays tennis the way he plays chess, aggressively and by dictating play, was himself outmuscled by Karatsev. One of the cleanest ballstrikers on Tour who can stun opponents with effortless winners even from seemingly neutral court positions, Karatsev left Rublev bemused, clubbing 41 winners and ending the World No. 8’s 23-match win streak at the 500 level.

“My game is to stay close to the baseline and dictate, be aggressive. If I hit winners, that's good, but it's not my focus,” said Karatsev, who crushed 27 winners in two sets to beat South African Lloyd Harris in the final.

“Rublev is a special kind of player. Once you stand back against him, it's done. It's tough to get from deep behind the baseline back into the court. The plan was to stay close to the line and not give him the position that he likes when he starts to move you. I thought I managed it pretty well.”

Karatsev’s next milestone could be the Top 20, alongside countrymen Medvedev, and Rublev. (Karen Khachanov is No. 22 and knocking on the door.) Medvedev, for one, can see it happening, but is at a loss to explain how we got here. “I think nobody can understand. I'm honest. I think only he can try to explain at least what's going on,” the two-time major finalist said this week in Miami.

“In Dubai, I watched his matches. He was playing definitely I would say Top 10, Top five level. He beat some amazing guys in amazing ways there. Hopefully, he can keep the momentum going throughout his career. Four Russians almost in the Top 20 is unbelievable.”

While many players have struggled to recover their best form since the beginning of the COVID-19 pandemic, Karatsev said that he benefitted from the stoppage.

Karatsev had begun to build momentum at the Challenger level before the Tour was suspended in March, 2020. He then laid down his racquet for the next three months, focusing exclusively on physical fitness (have you seen those calves!) and spending time with friends and family. In June, he went to Minsk for a two-week training block before heading to the United States to play a series of exhibitions.

When the Tour did return, Karatsev won 19 of his first 20 matches at ATP Challenger Tour level, taking titles in Prague and Ostrava.

“I was playing matches every day and that gave me a lot of confidence,” he said. “When the Tour started back up so many players weren't into it because they didn't have the matches. Stepping onto the court I already had confidence.”

Born in 1993 in Vladikavkaz, near Russia’s border with Georgia, Karatsev moved with his parents and sister to Israel when he was three. Mother Svetlana is a doctor and father Kazbek played football before focusing on his son’s career. Walking home from the beach one day, the family noticed a tennis centre and took his sister, Zarina, to play. “By the time I was four, I was trying to take the racquet away from her and start to play on the wall,” he said.

“My sister quit after two years, and then I started. All the attention went from my father to me. I started to practise seriously when I was six or seven. I already had a morning session, fitness session and I became No. 1 in Israel. That’s how it started. [Zarina now works in finance in Israel.]

“My father put all his energy into my tennis. He would go with me every morning. But it was tough to travel from Israel and the flights were really expensive. The federation would help with two or three tickets a year, but it wasn’t enough.”

Eventually, a lack of opportunities in Israel forced the family to make a tough decision: Aslan and his father would move back to Russia to further his career.

“It was a difficult to move away from your mother and sister when you are only 12. I flew back to Israel a couple of times in the first few months to visit them. But I took the chance because I found a sponsor in Russia.”

Despite the big move, Karatsev said that he would practise only once a day from the age of 12-15. "It wasn't like professional.”

At 15 he settled in Taganrog, close to Rostov-on-Don in south-west Russia, and began working with Aleksander Kuprin and Ivan Potapov.

At 21, former Russian pro Dmitry Tursunov started to help Karatsev, taking him to Halle, Germany, providing financial support and showing him “the right way to practise”. Karatsev also spent time in Barcelona and a few months in Croatia before deciding “to stop with Europe”.

Karatsev met his current coach at an ITF event in France three years ago and credits the turnaround in his mental approach to Yatsyk, who is not in Miami this week after failing to secure a visa into the United States.

“I had many situations when the match wouldn’t go the way I wanted and I'd be breaking racquets, talking to my coach, talking to the chair umpire, blaming the court. I should have been looking into myself to look for a way to deal with the situation. You can't play good every day, so you have to deal with those situations.”

Heading into Miami, the FedEx ATP Race To Turin is taking shape, with little surprise in the order of the Top four: Djokovic, Medvedev, Rublev and Stefanos Tsisiptas. Who’s in fifth? Why, Aslan Karatsev, of course, with a 770-point buffer over eighth-placed Grigor Dimitrov and Matteo Berrettini. What seemed inconceivable at the beginning of the year – a place in the Nitto ATP Finals in Turin – is now very much a possibility for Karatsev.

You May Also Like: Five Things To Know About Aslan Karatsev

“Had you told me this I would not have believed it,” he said. “You are just [kidding[ yourself. With success, you never know when it's coming, but I always believed I could make it. Yahor kept telling me: ‘You have to be strong mentally, you have to build your body stronger’. He was pushing me every day, saying I was better than the Challenger level.

“But [this success] didn’t come in one moment. We worked at it for 10 years, going back to the juniors. There have been a lot of ups and downs in the last three years. We have put in a lot of hard work.”

Karatsev makes his debut at the Miami Open presented by Itau Saturday against Kazakhstan’s Mikhail Kukushkin, third match on Court 4.