Philipp Kohlschreiber reached a career-high No. 16 in the Pepperstone ATP Rankings in 2012.

Kohlschreiber: ‘I Go Away With A Big Smile’

For Philipp Kohlschreiber, 1 August 2018 is a day that sticks in the memory.

In the morning, he married his long-term girlfriend, Lena Alberti. In the afternoon, he was in Kitzbuehel, tearing around the court in a second-round match against Denis Istomin. The story is a reflection of the German’s commitment to a 20-year career on the ATP Tour, which he brought to a close at Wimbledon two weeks ago.

“[It was] very unique,” said Kohlschreiber of his wedding day when speaking to ATPTour.com about his retirement this week. “I had been a little bit sick, so I couldn’t play the day before. I needed to get a little bit more rest to get ready for Kitzbuehel (where he was the defending champion).

"When you’re a professional guy, everything you do is for your sport… But you have to make a good date for your wedding, so it is easy to remember. 1 August 2018, it is always very simple for me. In that case, the wedding was a little bit more important!”

Kohlschreiber’s retirement announcement came out somewhat spontaneously after his first-round qualifying win at Wimbledon against Gregoire Barrere. For the 38-year-old it was simply a reflection of how comfortable he was with the decision.

“The funny thing is, I really didn’t plan to announce it,” said Kohlschreiber. “I was asked, ‘What is next for you?’ I just said, ‘There is no next, it’s going to be my last tournament.’ I didn’t plan to go to Wimbledon and say maybe, maybe not. It was just that day I felt, ‘OK, it’s time.’”

After so much time spent on Tour, Kohlschreiber may have been tempted to prolong his career by a few weeks for one final hurrah in front of home support at July’s Hamburg European Open. Instead, the lower-profile occasion of his second-round clash against Mikhail Kukushkin at Roehampton proved to be his final professional match. The German wouldn’t have had it any other way.

“If people know me, I am not a really a big fan of having a big stage and saying goodbye,” he said. “I am more a person who likes to [keep to] himself. I’m not a big celebration guy, and it would be much harder to finish in Hamburg with all the friends, family, and maybe some fans there cheering for me.

“I already had tears in my eyes in the last couple of games during the [last] qualifying match, so it would be another level if people are cheering for you, and you look at your box and also see your wife and friends. So, I think for me it was a good decision.” 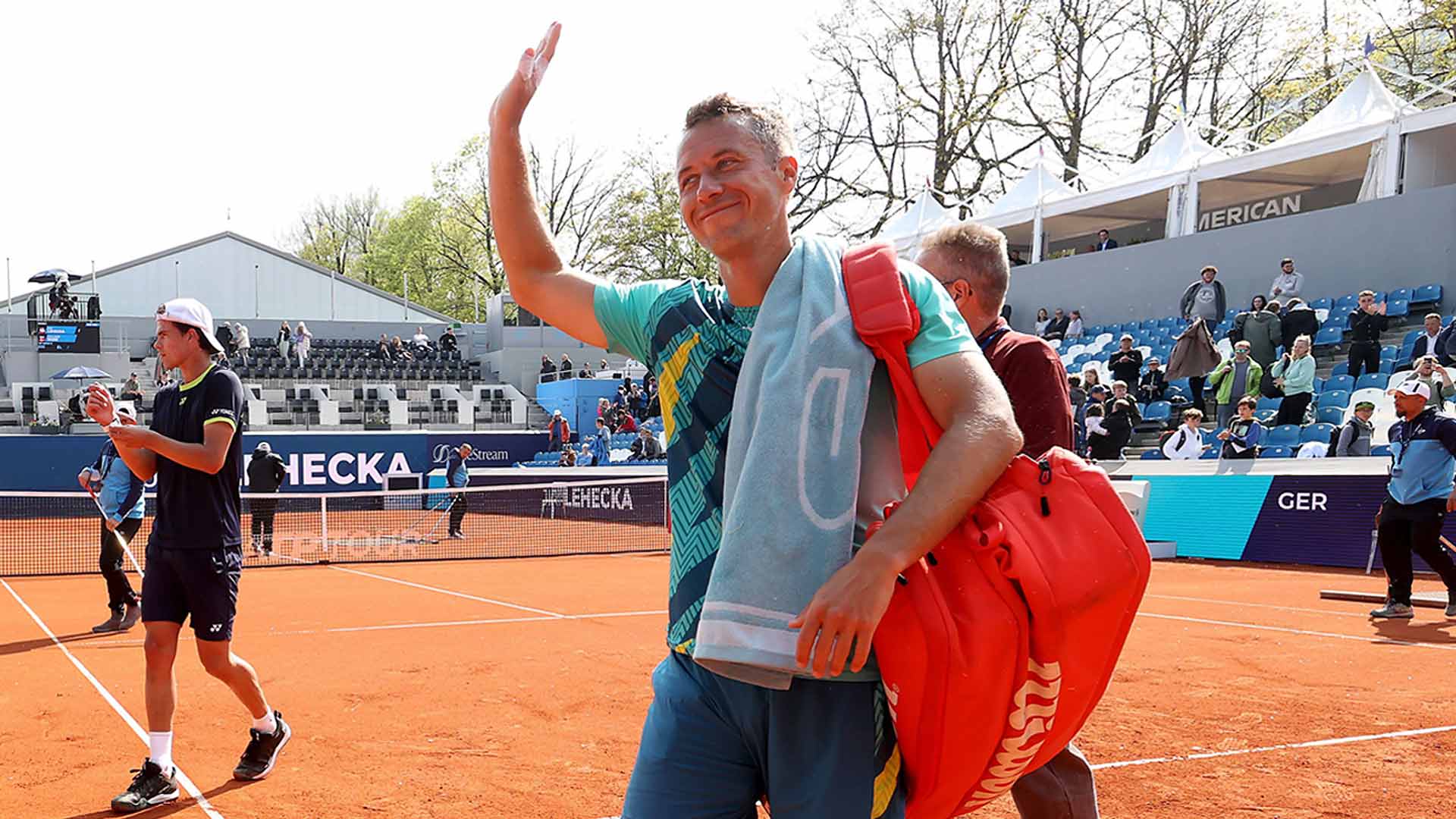 Kohlschreiber waves goodbye to his home fans in Munich after his final appearance there in April. Photo Credit: Alexander Hassenstein/Getty Images

Kohlschreiber proved himself one of the most consistent players after making his ATP Tour debut in Munich in 2002. He notched 478 tour-level wins and was a constant presence in the Top 100 between March 2006 and February 2021, much of which was spent in the Top 50. He attributes that longevity to a combination of good fortune, hard work, and smart scheduling.

“Of course, the first factor is health,” said Kohlschreiber. “I was very fortunate to have never had a surgery in my life, just minor things. I was a very consistent worker, maybe also made some right decisions. Sometimes it’s better to stop.

“I also think I have a very good structure for tennis. I am not too big, I am a lightweight player, and I would say I am very blessed with great movement. So that helped me to stay there so long."

Consistency may have underpinned Kohlschreiber’s career, but the German also enjoyed some standout moments. He won eight tour-level titles between 2007 and 2017, reaching his career-high of No. 16 in the Pepperstone ATP Rankings in July 2012, and also regularly competed against some bona fide legends of the sport. It is a combination of achievements that makes it hard for the German to nail down any one specific highlight.

“Winning at home [three times] in Munich, playing Andy Roddick in a night match on Rod Laver Arena, and also playing in maybe the most competitive era in tennis so far, with the big names of Rafa [Nadal], Roger [Federer], [Novak] Djokovic, [Andy] Murray,” said Kohlschreiber. “I was very fortunate to play in that time. Maybe I would have achieved a little bit more if three or four guys weren’t there, but it was also a great honour to play with them."

Kohlschreiber’s three Munich crowns were just one part of his success story at home tournaments. He won ATP Tour titles in Halle and Dusseldorf, lifted the trophy twice in his former residence of Kitzbuehel in Austria, and posted a 20-14 record in singles from 23 Davis Cup ties for Germany. Kohlschreiber was an expert in channelling home support, a situation in which many top players struggle.

“The pressure gave me good focus and concentration,” said Kohlschreiber. “You have the pressure situation, but you also have the support, so you just have to figure out how you can deal with the pressure and take all the good energy.

“[I also liked] the conditions,” he acknowledged. “In Munich and Kitzbuehel they are quite similar, and I have to say I am more of an altitude player. Since I was 14, I practised in Munich, so I’m almost perfectly used to it. I sometimes watch some highlights from Munich and it’s great to see how I played on my best days of the year.” 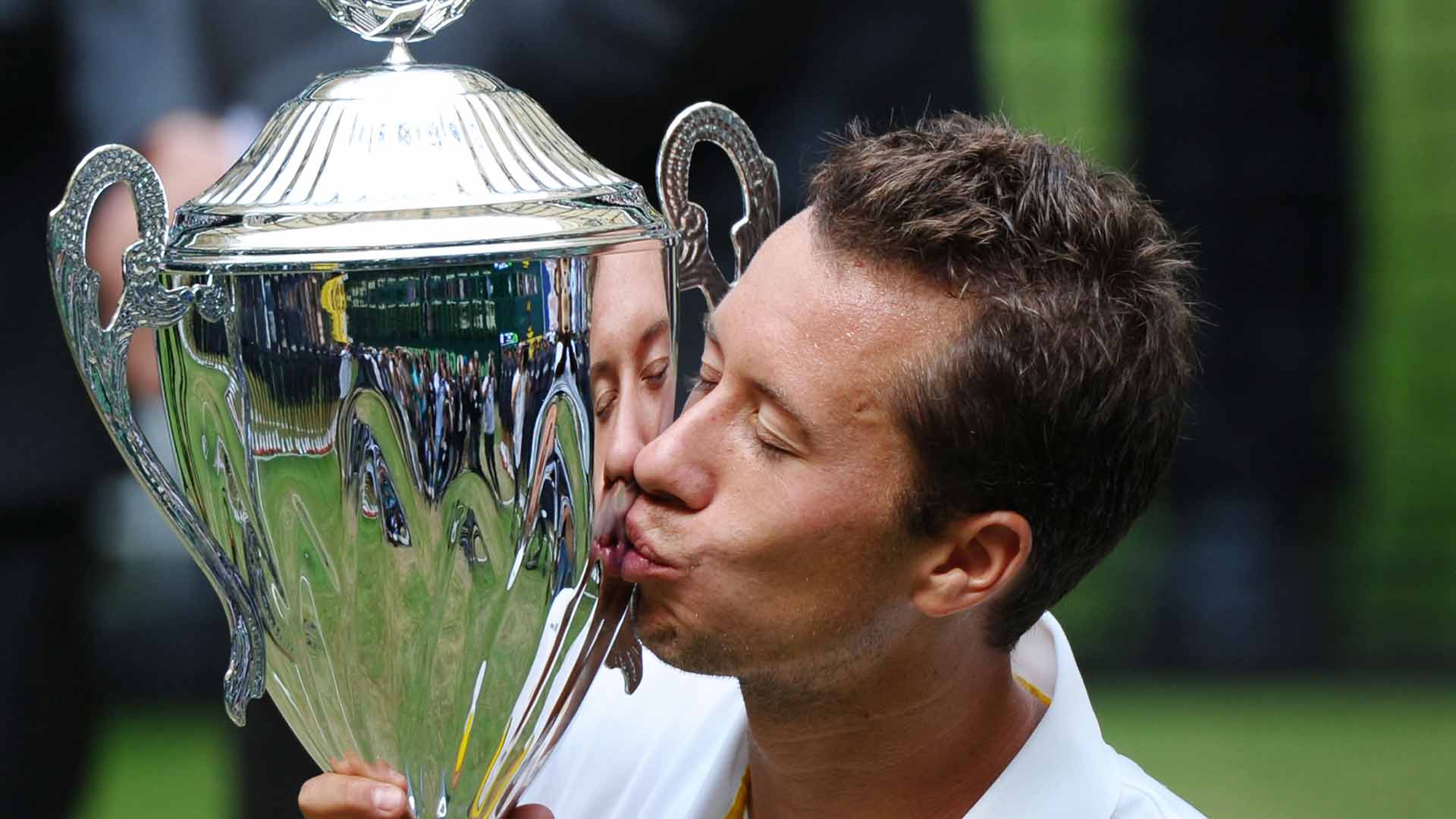 Despite an initial shock to the system, Kohlschreiber has adjusted quickly to the idea of life away from the Tour.

“I would say now it is pretty much OK,” he said. “The thoughts to stop were there already, for a year or even a little bit more, but in the few days after, it was very emotional. A lot of people wrote and brought up old stories, memories. [But] I was not sad about the decision because I knew it was time and the final motivation to live a professional life wasn’t there. It’s just that one part of your life is ending.

“All the travelling, all the life that tennis brings was maybe not that enjoyable at the end. I’m turning 39 this year, and I can say it was a very long [career] and I was very happy with everything.

“I can stop and say I had a great time. I didn’t overdo it. I go away with a big smile.”