Dominic Thiem beats Rafael Nadal for the first time at a Grand Slam to reach his maiden Australian Open semi-final.

Austrian to face Zverev in semi-finals

The Austrian recorded his first Grand Slam victory against the 2009 champion in six attempts to reach his first semi-final at the opening major championship of the year. Thiem won 78 per cent of first-serve points (65/83) and struck 65 winners to earn his maiden hard-court win against Nadal after four hours and 10 minutes.

”All the match was on a very good level. We were both in good form,” Thiem told former World No. 1 Jim Courier in an on-court interview. “We already had this epic match [at the US Open] in New York two years ago and today I had a feeling I was lucky in the right situations. The net cord was on my side. He is one of the greatest of all time, so you do sometimes need luck to beat him.”

The Austrian, who has fallen to Nadal in the past two Roland Garros finals, has now claimed one victory against the Spaniard in each ATP Tour season since 2016. Thiem's previous four wins against Nadal all came on clay. Since the start of the 2019 ATP Tour season, Thiem has won seven of his nine matches against the Big 3 of Nadal (2-1), Novak Djokovic (2-1) and Roger Federer (3-0).

Thiem will face Alexander Zverev for a place in the final. The 26-year-old leads Zverev 6-2 in their ATP Head2Head series, which includes a semi-final triumph in their most recent encounter at last year’s Nitto ATP Finals.

“It will be the first Grand Slam semi-final where I’m the older player,” said Thiem. “We’re great friends and I’m really happy that he’s in his first semi-final. We know how to play each other in a Grand Slam. The atmosphere will be so nice. It’s such a nice stadium and I’m looking forward to Friday.”

You May Also Like: Zverev Reaches Maiden Slam Semi-final In Melbourne

With both players attempting to take control of the centre of the court in baseline battles, it was Nadal who made the first breakthrough at 4-3. The Spaniard broke to love with a pinpoint backhand lob to serve for the first set. But Thiem was undeterred by his unsuccessful net approach, moving forward on multiple occasions in the following game to save set point and break with a forehand return winner.

In the tie-break, Nadal attempted to dictate rallies with his forehand before moving to the net to finish points. But Thiem had all the answers, rallying from 0/2 down with two forehand passing shots to earn three set points. The Austrian converted his first opportunity, ripping a forehand winner up the line to take the opener after 67 minutes. 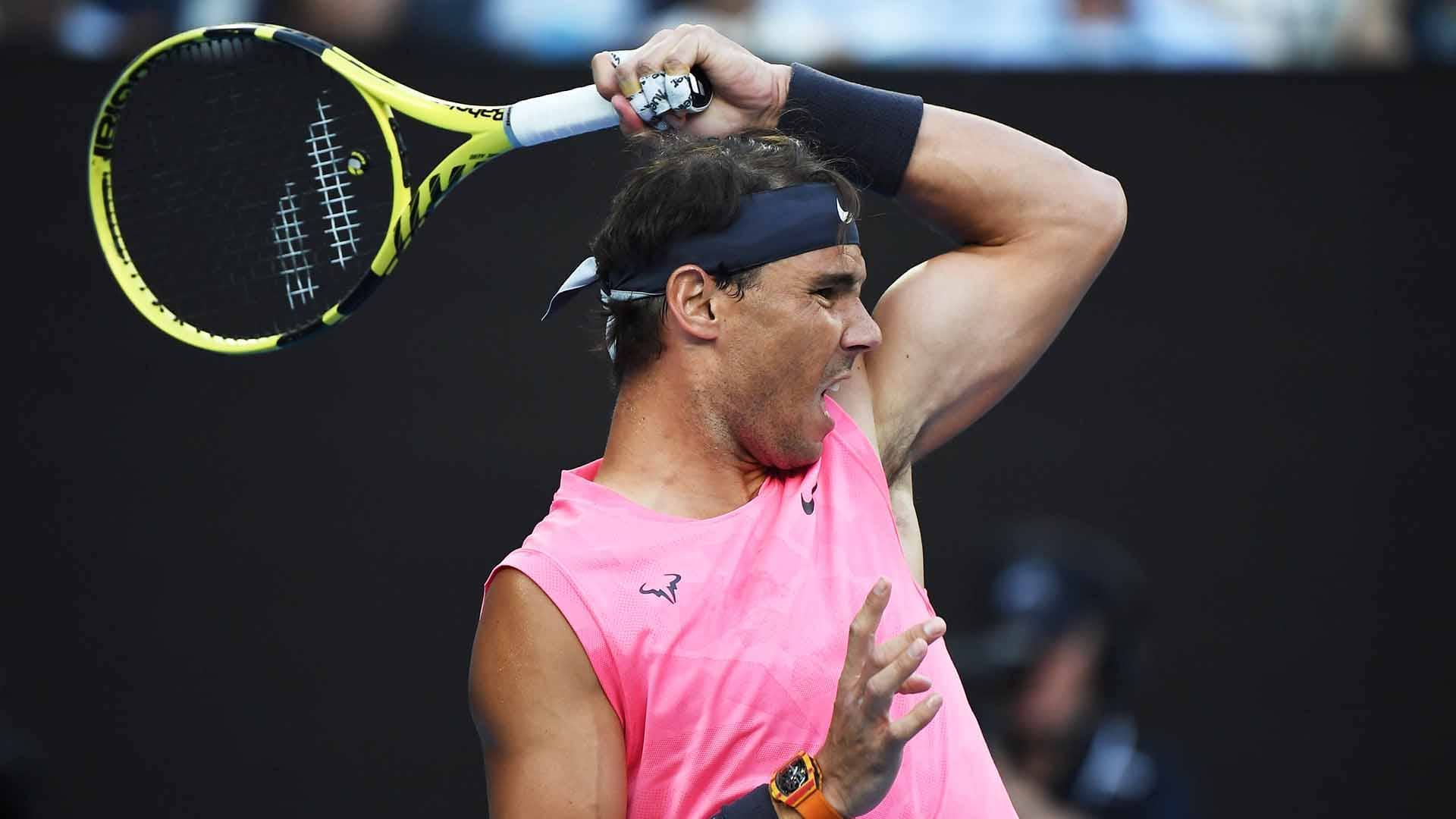 In the second set, Nadal hit his targets with two passing shots and benefitted from Thiem double faults to earn his second love service break for a 3-2 lead. Three games later, a similar sequence occurred. On this occasion, it was Thiem who found a way past Nadal at the net and clinched the break for 4-4 after a double fault from his opponent.

Nadal increased his forehand aggression to save set point at 5-6 and took the match to a second tie-break with a cross court backhand winner. But Thiem continued to find success, striking a dipping forehand passing shot and moving up the court to establish a 4/0 advantage. Despite Nadal charging back to 4/4, Thiem claimed three straight points with his forehand to move one set from victory.

“I was a break down in first two sets and, in the first set, I was fortunate to get the break back at 4-5 when he was serving for the set,” said Thiem. “In the second set, the break happened a little bit earlier. I played well in the two tie-breaks.”

With neither player able to manufacture a break point in the opening nine games of the third set, Nadal secured a break at the perfect time to force a fourth set at 5-4. The Spaniard charged up the court to force Thiem into baseline errors in the opening two points and claimed the set as Thiem fired a backhand into the net.

Go Inside The Match With Infosys MatchBeats

After saving three break points with powerful serving at 0-1, Thiem earned his third break of the match in the following game by attacking Nadal’s forehand to take a 2-1 lead. The 26-year-old maintained that advantage to serve for the match at 5-4, but handed Nadal a route back into the match with a double fault and three forehand errors.

Thiem dragged Nadal out wide with cross court forehands in the early stages of the tie-break and continued to attack his opponent’s backhand en route to a 6/4 advantage. The World No. 5 failed to convert two match points, committing a forehand error on his first opportunity. Thiem earned a third match point with a cross court backhand passing shot that clipped the tape and claimed victory as Nadal struck a forehand approach into the net.

“I just wanted to stay in the match [in the fourth set] and I got the break, then got to 5-4 and served for the match and a place in my first semi-final at the Australian Open," said Thiem. "It was so mentally tough and I could not handle it, but I managed to turn it around again. There were a few demons in the head. I was rushing too much and changing my tactics. I am very happy I won the tie-break.”

As a result of Nadal’s quarter-final exit, Novak Djokovic can regain No. 1 in the FedEx ATP Rankings by lifting a record-extending eighth trophy in Melbourne on Sunday.