With the trophy on the line and all to play for, Rafael Nadal produced a masterful display to reign at Roland Garros for the 12th time. The Spaniard overcame a determined effort from Dominic Thiem to prevail 6-3, 5-7, 6-1, 6-1 on Sunday afternoon in Paris.

The years may change, but Nadal's stranglehold on the Coupe des Mousquetaires remains the same. The Spaniard secured his 12th Roland Garros title after three hours and one minute, striking 38 winners and converting seven breaks of serve. His emotions flowed once again following championship point, collapsing to the terre battue and wiping away the tears from his eyes.

"It is truly incredible. I cannot explain it," Nadal said in French after his win.

With the victory, Nadal further closes the gap on Roger Federer for most Grand Slam titles in the Open Era. The Mallorca native's 18th major triumph moves him to just two behind Federer and his record 20-title haul.

Thiem held his ground for the first two hours of the final, even taking his first-ever set from Nadal in four meetings at Roland Garros. A majestic shotmaking display greeted fans as both competitors pushed each other to the limit. But as the match wore on, Nadal found his top gear and Thiem was unable to sustain his level. 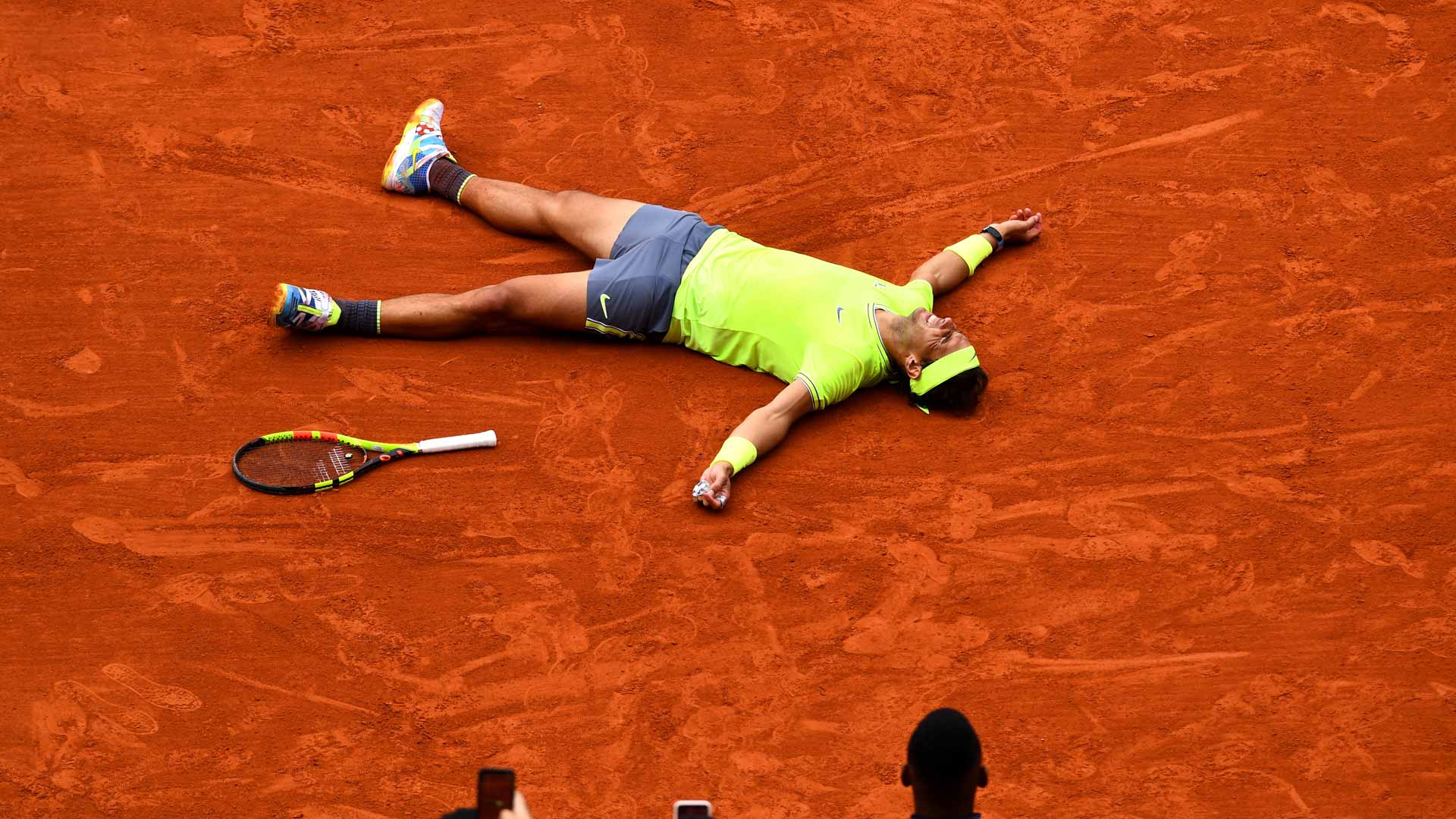 "Being able, at this time in my career, to get another victory is obviously a great satisfaction and a great happiness," Nadal added. "I thank all the people who support me, my family, my team for their great support, which I need, which is necessary for me.

"So I analyzed things, and I felt that I had to solve this particular problem. For the rest, I was playing well. But the important thing seemed to be not to give him the advantage when he was serving well and I had problems returning."

It is as unprecedented as it is unfathomable. Nadal's 12th tournament title puts his tenure in Paris in a class by itself. Never before has a player lifted a dozen trophies at a single tour-level event. The Spaniard has become the first to achieve the feat in the Open Era, also improving to a staggering 93-2 at the clay-court Grand Slam.

At the age of 33, Nadal continues to defy the test of time. The Spaniard extended the streak of Grand Slam titles won by players aged 30 and older to 11 straight. He is now the third-oldest Roland Garros champion, only younger than 34-year-old Andres Gimeno (1972) and 33-year-old Ken Rosewall (1968).

Moreover, Nadal joins Stefanos Tsitsipas at the top of the tour-level wins list in 2019 and assumes the lead in the ATP Race To London with 5,505 points. It marks the third straight year he holds the top spot in the Race following Roland Garros. Both he and Tsitsipas own a tour-leading 32 match victories this year, with Nadal also adding a second piece of silverware to his trophy case. He entered Roland Garros on the heels of lifting a record 34th ATP Masters 1000 trophy in Rome.

For the second straight year, Nadal and Thiem met in the Roland Garros final. In 2018, it was the Spaniard who prevailed 6-4, 6-3, 6-2, but Thiem carried great momentum into Sunday's clash. He had recently beaten Nadal in straight sets en route to the title in Barcelona, and also toppled World No. 1 Novak Djokovic in a five-set semi-final affair on Saturday.

It was in that Barcelona clash that Thiem beat Nadal at his own game, using his forehand to open the court and create space for his finishing shots. His depth enabled him to find the sharpest of angles and employ a highly aggressive gameplan. As play got underway on Court Philippe Chatrier, Thiem matched Nadal in intensity from the first ball and would earn the initial break for 3-2. Running around his backhand, he rifled a forehand into the open court to surge ahead.

Thiem continued his dogged defence as the set wore on, but Nadal responded in kind, striking his forehand with conviction to break right back. It was a high-level opening frame, with both players trading blistering blows from the baseline and demonstrating their deft touch around the net. Through the first seven games they produced 21 rallies over nine shots. Nadal would hit his top gear to break for a second time and seize the opening set - his 10th straight against Thiem - after 54 minutes.

Nadal was just getting started. His serve would reach peak levels as the second set got underway, and the reigning champion enjoyed a stretch of 16 straight points won on his delivery. In fact, neither player would win more than two points in a return game through the first 11 games.

But it was in the 12th game that Thiem pounced. A rattled Nadal made a pair of unforced errors and the Austrian finally claimed his first set against the Spaniard in four meetings at Roland Garros. Sensing his opportunity to draw level, he dialed up the aggression, forcing a backhand error to seal the set 7-5.

As quickly as Thiem turned the tables, Nadal swung momentum back into his corner after letting the second set slip from his grasp. He benefitted from a dip in focus from Thiem as the third set commenced. The World No. 2 consolidated a break to love as a Thiem forehand flew long, reeling off 11 straight points without pause.

Most Titles At A Single Tour-Level Event

One hundred per cent intensity is required to stay competitive against Nadal on clay, and Thiem would struggle early in the third. He conceded two straight breaks and was unable to recover, as Nadal streaked to a two-sets-to-one lead in a flash.

"The beginning was unbelievable intensity of the match," said Thiem. "And I dropped a little bit towards the end of the first set. Then I played the way I should play in the second set, very aggressive.

"After those two sets, I dropped a little bit my level. Rafa, who won this tournament 12 times, he stepped on me. Afterwards, it got really tough for me. He played outstanding today, because especially in the first two sets I played very good tennis. What he was performing I think is unbelievable, really.

"There has to be a reason why he's that successful. I mean, he won 18 Grand Slams, which is a big number, which is only two less than Roger. So definitely he's one of the greatest of all time. Today, I saw why."

With former World No. 1 Marat Safin and renowned actor Woody Harrelson in attendance, Nadal would deny a break point immediately to open the fourth set. And a forehand error at 15/40 in the next game would prove critical, handing the Spaniard the decisive break. Thiem pressed to break back in the next game, but Nadal would slam the door shut for good. He marched across the finish line after just over three hours when a Thiem forehand return sailed long.