Thanasi Kokkinakis (left) and Nick Kyrgios at the 2022 Australian Open.

When Thanasi Kokkinakis and Nick Kyrgios met in the opening round of the US Open, Kyrgios described it as ‘one of the most uncomfortable matches’ of his career. This time around, the Australians are set to compete in a more comfortable setting: doubles partners at the season-finale Nitto ATP Finals.

Kokkinakis and Kyrgios have always thrived on the big stage and the Aussie pair is anticipating bright lights yet again, this time in Turin, Italy.

“It’s [going to be] a pretty awesome experience,” Kokkinakis said. “I don’t think it’s something we expected coming into the year. To do it with such a good mate, there’s going to be good energy out there.”

Kokkinakis and Kyrgios made the best possible use of a wild card at the Australian Open, where they collected their maiden major title. In front of an energised crowd in Rod Laver Arena, the pair won the all-Aussie clash between Matthew Ebden and Max Purcell, 7-5, 6-4.

While some claim, ‘practice makes perfect’, Kokkinakis and Krygios have had a dream season together with little to no doubles practice.

“We definitely don’t practise doubles at all. We don’t do any doubles drills or anything like that. Maybe it can be an advantage, maybe a disadvantage at times because we only do our own thing.”

Although they had played doubles together before, dating back to the 2013 Australian Open, the duo hadn’t found the success its relished until this year. The Aussies lifted their second title of the season at the ATP 250 event in Atlanta. Just two good mates enjoying the sport together has led to them qualifying for Turin. 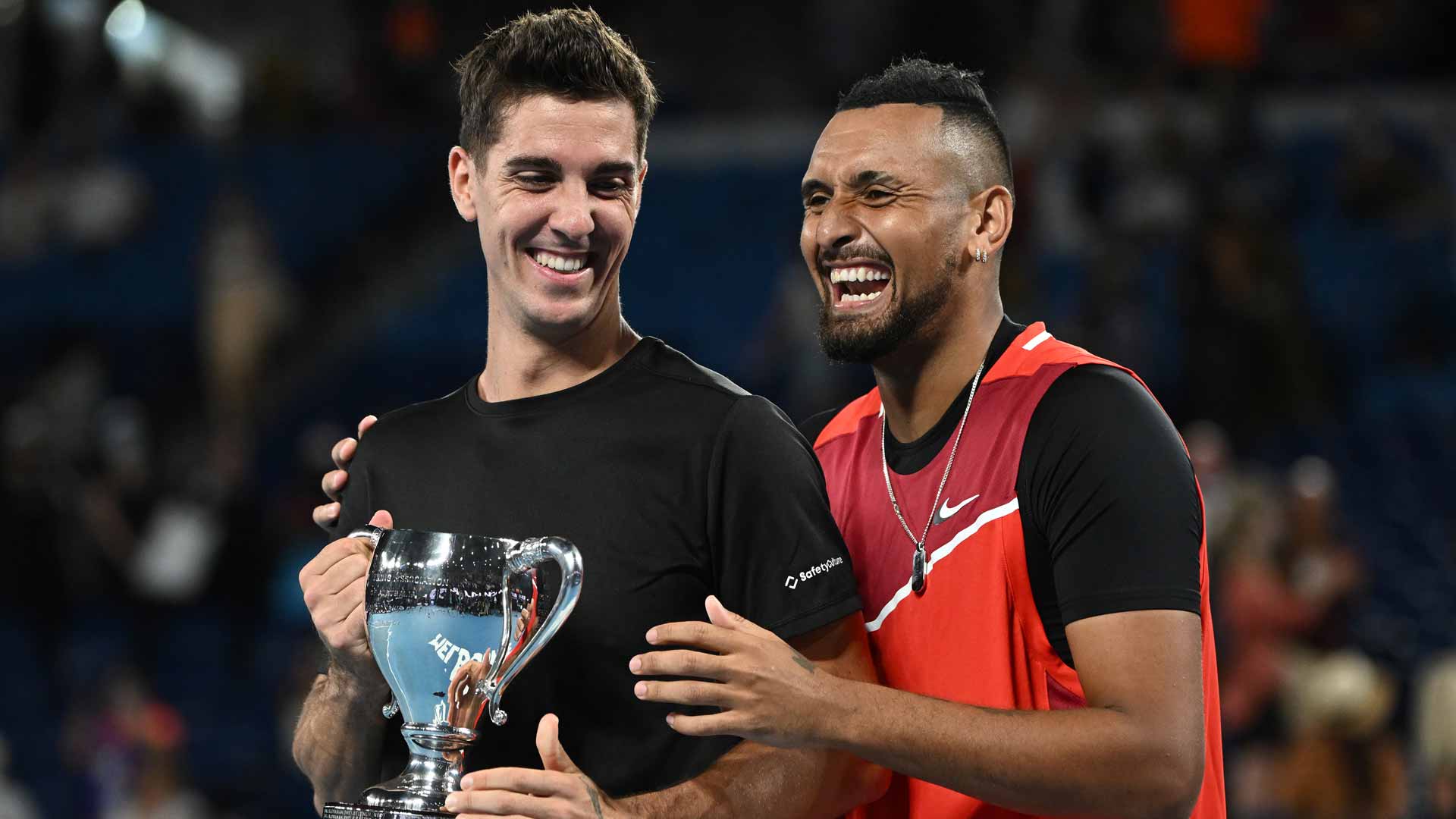 “I think we balance out each other well,” Kokkinakis said. “When the other one is down, we lift each other up. We both are captains at times whenever we need it.”

Kokkinakis and Kyrgios have also each claimed a singles title this year. Kokkinakis won his maiden Tour-level trophy on home soil at the Adelaide International 2 (January). During a summer hot-streak, Kyrgios won 15 of 16 matches, including reaching the Wimbledon singles final (l. Djokovic) and triumphing at the Citi Open in Washington, D.C.

At the US Open, Kyrgios won his first Tour-level meeting against his close friend Kokkinakis. ‘Special K’s’ haven’t veered too far from what they do well on the singles court to achieve doubles success.

“I think we bring our singles strengths onto the doubles court,” Kokkinakis said. “If we try and be doubles players instead of playing our [natural] game, it’s not going to come out too good for us. We’ll just play aggressive, serve big, and see what happens. I think we are going to continue to play singles on a doubles court.” 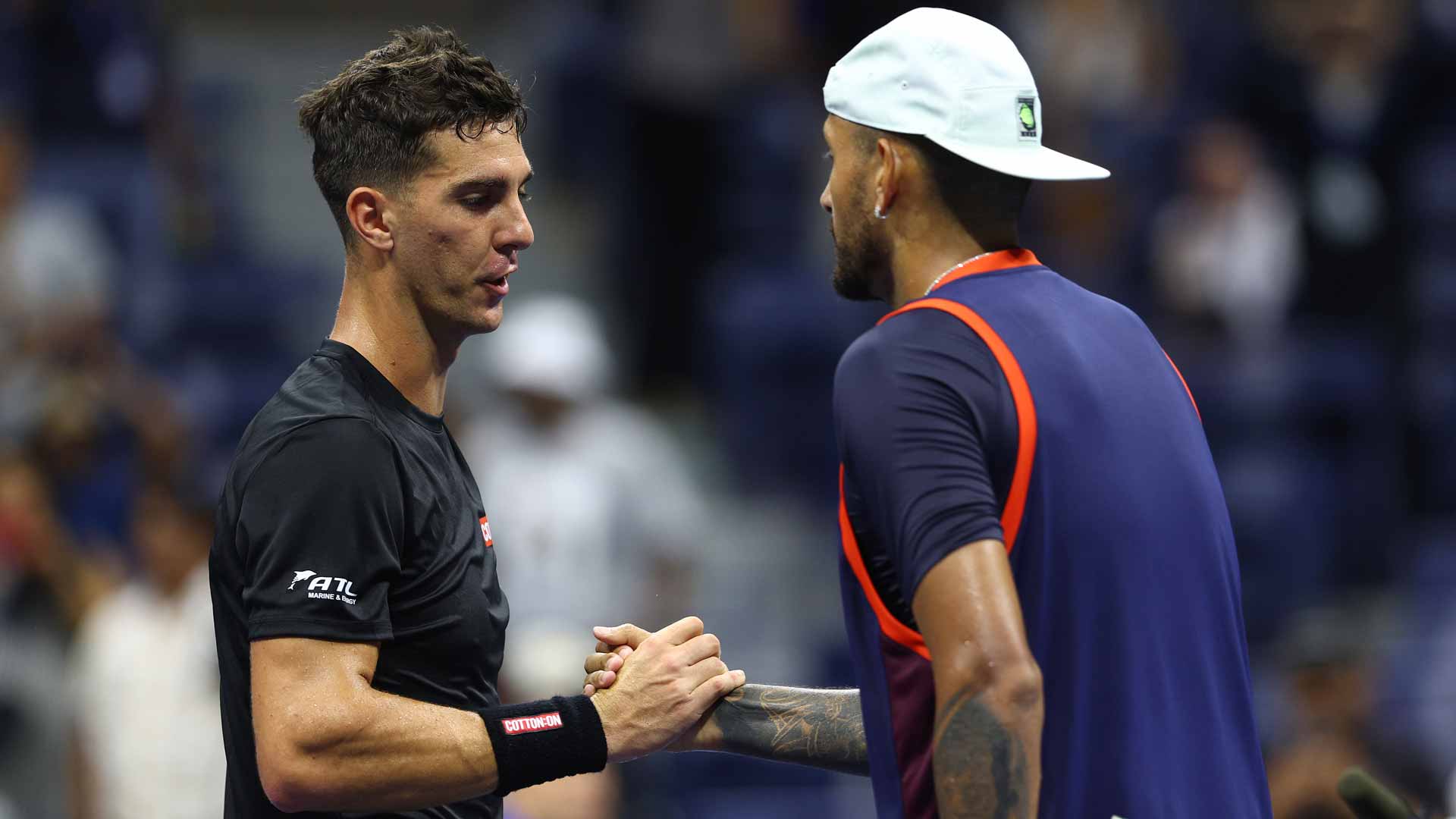 Close friends Kokkinakis and Kyrgios encountered each other in the US Open opening round. Credit: Elsa/Getty Images

When they step foot on Italian soil, a flock of tennis fans will be eager to see what the Aussies can do during their Nitto ATP Finals debut. Kokkinakis anticipates an energetic environment, much like what they’ve seen all season.

“It should be fun, it’s a new experience for us both,” Kokkinakis said. “It’s a massive event. We’d love to have the Italian fans going nuts.

“Wherever we’ve played this year the crowds have been packed with unbelievable energy. It’s pretty fun for us. Hopefully it can be a continuing thing going forward.”

Kokkinakis and Kyrgios, who have played just seven tournaments together this season, boast a 19-5 match record in 2022. At eighth in the Pepperstone ATP Live Doubles Teams Rankings, the pair sets its sights on being crowned champion at the coveted Nitto ATP Finals.