Tommy Paul is trying to surpass his career-high FedEx ATP Ranking of No. 50.

Paul On The Prowl: 'You Want To See Him Have Success'

Andrew Eichenholz
This article contains:
Learn more about the American, who upset Rublev

Tommy Paul was disappointed on Monday evening, but he was still having a blast. The American had just failed to serve out his third-round match at the BNP Paribas Open against fourth seed Andrey Rublev.

But instead of panicking, he took a moment to feel the atmosphere inside Stadium 4 at the Indian Wells Tennis Garden.

“I was mad that I didn’t hold and win the match, but I wasn’t too upset to be out there a little longer,” Paul told ATPTour.com. “It was so much fun every changeover having the people scream your name and get loud. For a second I literally just closed my eyes and I was just like soaking it in before that last game. I was like, ‘This is unreal. I could be out here for five sets, I don’t care’.

Paul rebounded to earn his first ATP Head2Head victory against Rublev 6-4, 3-6, 7-5 and reach the fourth round at an ATP Masters 1000 event for the first time. He will play in-form Briton Cameron Norrie for a spot in his first quarter-final at this level.

Fifteen minutes after match point, the 24-year-old still had a big smile on his face. It was not just because he earned his first win against a top five opponent, but the fun he had doing it.

“You get up and you’re about to return or you’re about to play a game and you hear everyone, the energy coming from everybody. It’s just hard not to feel it coming into your body. It’s a good feeling,” Paul said. “It’s almost like an adrenaline from people, just energy from people. It’s a feeling that you can’t ignore. It’s impossible to ignore the feeling, so you might as well embrace it. I love it.” 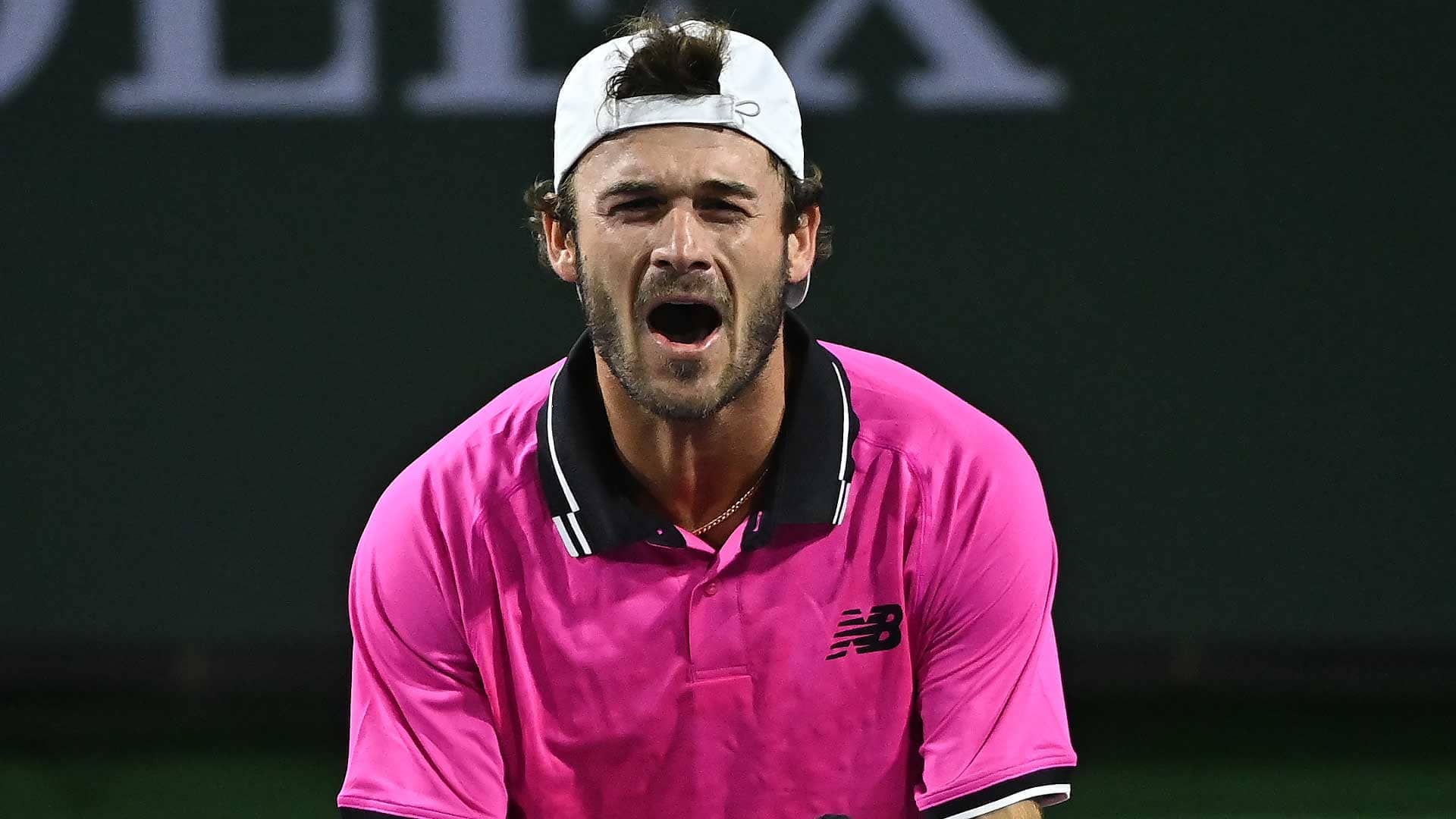 Paul celebrates his win against Rublev in Indian Wells. Photo Credit: Peter Staples/ATP Tour
It appeared during his teens that Paul would be enjoying moments like that often. The American won the 2015 Roland Garros boys’ singles title and in 2017, as a 20-year-old, he made the Washington quarter-finals in which he held three match points before losing against Kei Nishikori.

But it took Paul until September 2019 to break into the Top 100 of the FedEx ATP Rankings as he struggled to find consistency. The Florida resident has not made an ATP Tour final.

“He still has so many more things in front of him that are going to be new and exciting and hopefully that he’s going to make a splash at,” said Brad Stine, Paul's coach.

The former coach of former World No. 1 Jim Courier noted that his charge broke onto the scene six years ago, but this is only Paul’s second full season on the ATP Tour. Stine is greatly enjoying the process of trying to improve the World No. 60’s game.

“I’ve known Tommy really since he was about 14 or 15 when I first went back to the USTA. He’s just such a personable guy. He just draws you in. It’s hard not to root for Tommy Paul when you’re around him and get to know him,” Stine said. “That makes you want to be that much more invested in what goes on with him. You want to see him have success because of that.

“He’s a guy who makes losing hurt if that makes sense. The winning is always nice, but the losing hurts more when you’re with someone whom you’re that invested in.”

It does not take long being around Paul to notice that he is one of the more relaxed and well-liked guys in the locker room. He is typically hanging out with friends, including Taylor Fritz, Reilly Opelka, Frances Tiafoe and Mackenzie McDonald. You are more likely to catch him discussing the Philadelphia 76ers and Philadelphia Eagles than a match being played.

“I’m much more laid back and relaxed than a normal tennis player. A lot of tennis players are pretty weird. I like to think that I’m a little bit more normal,” Paul said, cracking a laugh. “Obviously when I’m home I hang out with Reilly or whoever down there, but then I have friends who aren’t in sports. I like to say that I’m normal, but at the same time it’s impossible to be with the schedule.

“Everyone wants to plan events and do stuff, and I’m like I’m in Monaco or Russia or something. That’s different, but for the most part I like to live a 24-year-old’s lifestyle.”

Follow Paul on social media and you’ll periodically see posts at a sporting venue, on a boat, or something of the sort. But that does not mean he is not taking care of business and doing everything he can to maximise his potential.

“Don’t get it twisted. I’m busting my a** when I’m practising. I’m working hard with my trainer and working very hard with my coach,” Paul said. “But at the same time when I have opportunities to live a normal life, I try to.”

Stine said that Paul could be “loosey-goosey” on the practice court sometimes. But the coach is measured in how he deals with that. After all, he earned one of his biggest wins yet on Monday having a blast.

“I said one of my goals has been not to beat the fun out of Tommy, because I think he plays his best tennis when he’s having fun,” Stine said. “I think the competition is fun for Tommy in the first place.”