ATP Staff
This article contains:
2021 semi-finalist one win away from biggest title of career

Casper Ruud delivered a ruthless semi-final display on Saturday night at the Nitto ATP Finals, where the third-seeded Norwegian dispatched Andrey Rublev 6-2, 6-4 in Turin to set a championship match clash against Novak Djokovic.

Ruud struck the ball with consistency and power and was clinical at key moments as he converted four of four break points to cruise to a comfortable victory at the Pala Alpitour. The only blip for the Buenos Aires, Geneva and Gstaad champion came at 5-2 in the second set, when he dropped his serve when serving for the match, but he held firm to seal his win in just 69 minutes.

“It's tough sometimes because things are obviously going great, but sometimes they can go almost too well,” said Ruud after his triumph. “So you feel like you can do anything with the ball and you can get a little bit ahead of yourself.

“I don't think I did when I was serving for it [the first time]. Andrey hit some great returns, aggressive with the forehand. Of course, you tend to hesitate a little bit. Luckily for me, I go out there at 5-4 and serve with new balls, so that helps a lot. I knew that I had the backup break. I wasn't stressing too much. Everything sort of was going my way today.”

Rublev had expertly maintained his focus to rally to a crucial three-set round-robin victory against Stefanos Tsitsipas on Friday night, but the sixth seed was unable to deliver a repeat performance against the rock-solid Norwegian as Ruud raced into the final on just his second Nitto ATP Finals appearance.

In a meeting between two of the biggest forehands in the game, it was Ruud who shone brightest off that wing. The Norwegian’s INSIGHTS Forehand Quality score for the match was 8.5 out of 10, a tally 1.3 higher than the ATP Tour average. 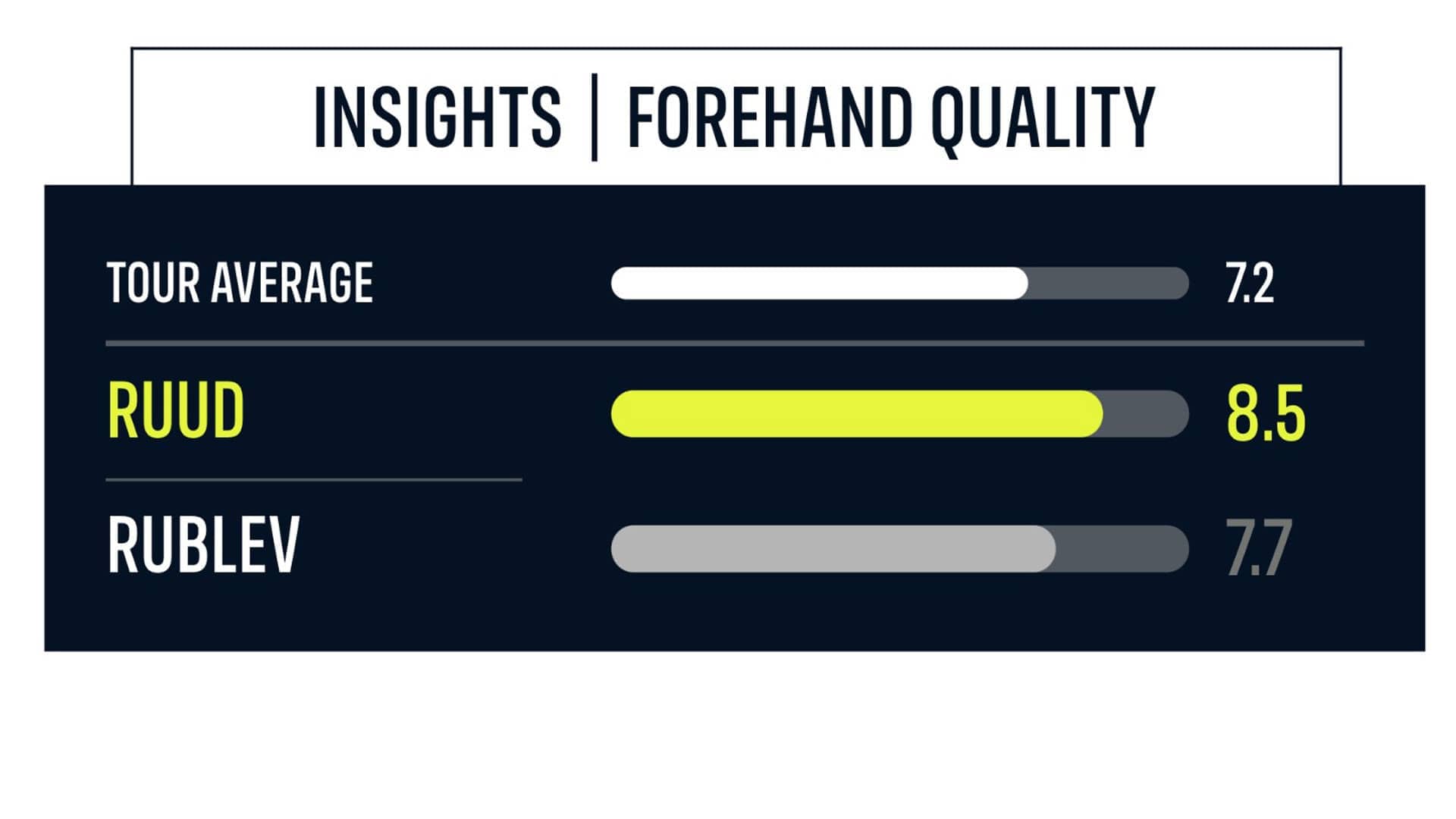 Ruud and Rublev had appeared set for a hard-fought contest after some hard-hitting rallies in the early stages at the Pala Alpitour, but Rublev made a series of errors from 40/15 to hand Ruud a break in the fifth game. The Norwegian then took firm control, reeling off seven more games in a row to move within two of a milestone victory.

A late surge from Rublev, during which he recovered from 1-5 to 4-5, proved too little, too late, with his 23 unforced errors the defining statistic of his loss. In contrast, Ruud made just eight, while the Norwegian also hitting 20 winners en route to his 51st tour-level victory of the season.

It was only Ruud’s second victory against Rublev in five ATP Head2Head meetings. His sole previous win also came in Turin, a three-set triumph in the round-robin stage in 2021.

“I got a couple of good beatings from Andrey, so it was nice to sort of get revenge from that,” said Ruud. “And we haven't played since here last year. I'm not going to get ahead of myself, but I guess I have a good thing going against him in Turin.”

Ruud will be the first Scandinavian to contest a Nitto ATP Finals championship match since Sweden’s Stefan Edberg in 1990. Should he defeat Djokovic and clinch the title, the 23-year-old will pass Rafael Nadal to end the year as No. 2 in the Pepperstone ATP Rankings. Yet he is aware of the task that lies ahead.

“He's a player that doesn't have many weaknesses at all,” said Ruud of Djokovic. “But he's human. He's had a great year… But he is human. He lost two weeks ago to Rune in the [Rolex Paris Masters] final.

“It's not like he plays these finals every day of his career, in his life. I'm sure he will also feel a little bit of pressure. There's a lot on the line. [In the Pepperstone ATP Rankings], I may be ahead of him, but I feel like the underdog. He has won this tournament five times and I've seen them all on TV, how great he has played.”